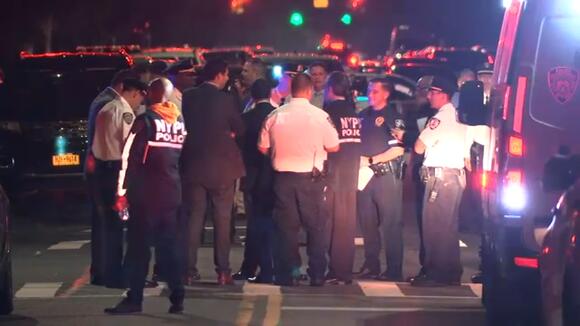 An NYPD officer is in custody after allegedly killing a woman and shooting another inside a Brooklyn home, police say.

It was not yet clear if the weapon used was Wu's service weapon. Police said she was calm and very forthcoming when they arrived at the scene. "I saw them put the woman in the car that they arrested and she seemed very calm, it was strange, it seemed like it was from a different scenario, you know she just seemed so peaceful, we weren't," said eyewitness Valerie Wares. ALSO READ | What Gabby Petito's death by strangulation could mean for Brian Laundrie's case

well atleast she didn't kill an innocent black man sitting on the couch in his own apartment eating ice cream minding his own business.

wow this is no coverage from the bias news. this is an Asian on Asian and the lgbt on lgbt crime stats. if this was a straight person killing an lgbt person this would've been all over the news.

omg the alphabet community be extra violent in their love triangle shenanigans..

Investigators say one of the men shot an 18-year-old store clerk in the head during a confrontation inside the M&M Grocery.
BROOKLYN, NY・11 HOURS AGO
ABCNY

Verlon Thomas, 36, is accused of ordering the girl to get into his car Monday afternoon in East New York.
BROOKLYN, NY・4 HOURS AGO
ABCNY

Officers pulled over the BMW SUV on Cozine and Pennsylvania avenues at around 3:30 a.m. Wednesday.
BROOKLYN, NY・1 HOUR AGO
ABCNY

The victim would be 35 years old today. Her family told Eyewitness news that time has not closed the wounds and the pain of losing her has not ebbed.
BRONX, NY・16 HOURS AGO

Passaic police say that they have identified Ernest Fuentes as one of the gunmen and have issued a warrant for his arrest.
PASSAIC, NJ・3 HOURS AGO
ABCNY

They are accused of slapping a 3-year-old boy across the face last Friday. Police say the women approached an 18-year-old girl Sunday and pulled her to the ground.
BROOKLYN, NY・11 HOURS AGO

Police in New Jersey have released a surveillance photo of the suspect wanted in connection to the murder of an 84-year-old woman inside her home.
BELLEVILLE, NJ・2 DAYS AGO
ABCNY

The flames started in the Dragon One restaurant before spreading to a neighboring restaurant and up through the five-story apartment building above.
UPPER EAST SIDE, NY・22 HOURS AGO
ABCNY

A video was posted on Snapchat showing the two students inside Platt High School in Meriden, north of New Haven.
CONNECTICUT STATE・4 HOURS AGO

The 54-year-old woman told police she was stabbed multiple times near her home. The woman's 84-year-old mother was then discovered dead in the home.
BELLEVILLE, NJ・2 DAYS AGO
ABCNY

Two MTA workers were honored by the transit authority on Tuesday for their actions during an emergency service delay.
MANHATTAN, NY・18 HOURS AGO
ABCNY

After days of searching, Gary and Lorraine Parker's bodies were found by the police department's drone in a densely wooded area.
STAFFORD TOWNSHIP, NJ・17 HOURS AGO
ABCNY

Bradley Cooper says in 2019 he was held at knifepoint on a New York City subway.
NEW YORK CITY, NY・14 HOURS AGO
ABCNY