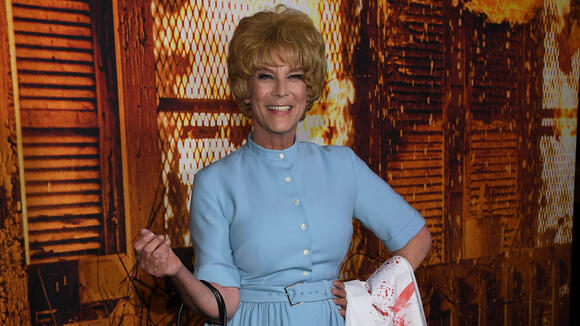 Jamie Lee Curtis dressed as her mother Janet Leigh from the horror classic “Psycho” at the costume party premiere of “ Halloween Kills ” on Tuesday night at the TCL Chinese Theatre in Hollywood. Curtis commanded attention when she hit the black arrivals carpet in a blonde wig and blue dress while carrying a bloody shower curtain.

“It’s the ultimate good versus evil,” Curtis said of the “Halloween” franchise. “Laurie Strode represents the quotidian, quintessential, innocent American teenage girl, that is innocence personified. And when you collide it with the essence of evil which is Michael Meyers, you create a tension that you, the audience member, wants to protect her.”

The sequel to the most recent “Halloween” film, “Halloween Kills” premieres Oct. 15. The film follows Strode and her family as they band together with the other survivors of Haddonfield, Ill. to hunt down Michael Meyers and end his reign of terror once and for all.

“It’s old school. Every western has a good guy and a bad guy. Shakespeare, the Greeks, there’s always been this collision between good and evil, and it’s been very successful and emotional at the same time,” Curtis told Variety .

The film tackles themes of fear and the gravity of death, but director David Gordon Green explained that the beauty of the franchise also lies within the audience’s ability to take away their own lessons from the story. Green arrived in costume as an old-school movie theater ticket man, dressed in a red suit with yellow detailing.

“The beauty of Michael Meyers is it’s an expressionless, emotionless face, and so we can project our fear onto him, or if you like having fun at a scary movie, let’s go scream our heads off and eat some popcorn,” Green said.

The original premiere date for “Halloween Kills” was slated nearly a full year ago, but was delayed due to the pandemic. “It was so hard when the movie was finished, and we didn’t get to show it, so I’m very glad we’re getting to show it in the best theater in the world here,” said producer Jason Blum , dressed as Strode in a blonde wig, green jacket and white shirt.

Curtis, Green and Blum introduced the film before the screening (“Happy fucking Halloween!” yelled Curtis to a cheering audience), which was immediately followed by a rooftop afterparty at the nearby Dream Hotel.

A suspect has been arrested in the killing of Jacqueline Avant, the Beverly Hills Police Department announced in a press conference Thursday. Police arrested Aariel Maynor, 29, who allegedly shot and killed Avant after breaking into her Beverly Hills home early Wednesday morning. Avant was the wife of music industry legend Clarence Avant, the mother of Democratic fundraiser Nicole Avant and the mother-in-law of Netflix co-CEO Ted Sarandos. Several cameras caught Maynor’s vehicle driving east out of Beverly Hills after the shooting. Around 3:30 a.m., Hollywood police responded to a reported shooting in the 6000 block of Graciosa Drive. There, they found...
BEVERLY HILLS, CA・10 HOURS AGO
Variety

Jurnee Smollett has landed the female lead in “The Burial,” a new courtroom drama from Amazon Studios. The “Lovecraft Country” actor will star opposite Jamie Foxx and Tommy Lee Jones in the Maggie Betts-directed project. Based on a true story, the film follows a bankrupt funeral home owner who decides to sue a rival businessman over a handshake deal gone wrong. The owner hires a flamboyant attorney (Foxx) to handle the case. Smollett will play Foxx’s opposing counsel, sources said. Betts is directing from a script written by Doug Wright. Producers on the film include Bobby Shriver via his Bobby Shriver Inc....
MOVIES・14 DAYS AGO
Variety

“Don’t Look Up” is the last shoe to drop for Netflix this awards season, and there’s a 50/50 chance of it making a seismic impact (pun intended). Director Adam McKay assembles a sprawling ensemble that includes Oscar-winners Leonardo DiCaprio (“The Revenant”), Jennifer Lawrence (“Silver Linings Playbook”), Meryl Streep (“Kramer vs. Kramer,” “Sophie’s Choice” and “The Iron Lady”), Cate Blanchett (“The Aviator” and “Blue Jasmine”) and Mark Rylance (“Bridge of Spies”), along with Oscar-nominees Timothée Chalamet and Jonah Hill, to create a satirical look at our species’ (most likely) inevitable demise. DiCaprio has launched himself into the awards conversation, delivering another knockout performance...
MOVIES・14 DAYS AGO
enstarz.com

Tariq May Have a Body Count, but Michael Rainey and The Cast of 'Power Book II: Ghost' Dressed to Kill at Season 2 Premiere!

The premiere and after party for season two of Power Book II: Ghost were held last night, November 17th, in New York City. The cast and crew came out dressed their best to celebrate all of their amazing work on an incredible season. The premiere was held at the SVA theater. Prior to the screening, show creator Courtney Kemp shared some heartfelt words about her brother: her largest supporter, who tragically passed away this last year. She dedicated this season of the show to him.
NEW YORK CITY, NY・13 DAYS AGO

Is Leah Remini About to Reprise Her Iconic ‘Saved by the Bell’ Character in the Show's Reboot?

We all love a good reboot. But you know what's the best part of revisiting an old favorite?﻿ Seeing the original cast come back to reprise their beloved roles. (We're literally gritting our teeth in anticipation of the return of ﻿Sex and the City﻿ as ﻿And Just Like That...). ﻿On the list of successful remakes is ﻿Saved by the Bell﻿, which premiered on Peacock back in November 2020.
TV SERIES・3 DAYS AGO
Deadline

Cult and controversial actor-director Vincent Gallo is returning to acting after a near decade-long absence from features. Quietly, Gallo took on one of the lead roles in D.J. Caruso’s (xXx: Return Of Xander Cage, Disturbia) movie thriller Shut In, which is the first original movie from conservative media outlet-turned film producer The Daily Wire. The project marks Gallo’s first feature acting role since 2013 film The Human Trust. The actor-filmmaker, now 60, is best known for directing controversial indie movie The Brown Bunny (2003) with Chloe Sevigny and Christina Ricci starrer Buffalo 66 (1998), and for leading cast in Francis Ford Coppola’s 2009 film...
MOVIES・1 DAY AGO
Hello Magazine

It's no secret that Brooklyn Beckham is a fan of cooking, often taking to Instagram to share videos of his culinary creations with his 12.9 million followers. On Sunday, David and Victoria Beckham's eldest son put his cooking skills to the test once again. This time, the 22-year-old whipped up an Italian-inspired meal for his fiancée Nicola Peltz and her friends as the actress enjoyed a girls' night in the duo's $10.5 million Beverly Hills mansion.
CELEBRITIES・10 DAYS AGO
Popculture

The Happy Days family has lost on of its original stars. Irish actor Gavan O'Herlihy, who starred in the first season of Happy Days, died on Sept. 15 at age 70. His death was first reported on Nov. 9 in the Irish Echo. O'Herlihy also starred in Superman III, Willow, and Never Say Never Again. He was the son of Oscar-nominated actor Dan O'Herlihy.
TV & VIDEOS・20 DAYS AGO

Hollywood has lost a star way too soon. Heath Freeman, the actor who appeared in hit shows like "NCIS" and "Bones", has died, his manager confirmed to E! News. Heath was 41 years old. "We are truly devastated at the loss of our beloved Heath Freeman," a statement from his...
CELEBRITIES・16 DAYS AGO
DoYouRemember?

Needless to say, there have been a lot of issues at Jeopardy! since the passing of beloved host Alex Trebek. The show had several guest hosts in order to find a replacement. They chose executive producer Mike Richards, who soon quit the show altogether after fans uncovered some offensive statements he made in the past. Now, Ken Jennings and Mayim Bialik are switching off hosting duties.
TV & VIDEOS・15 DAYS AGO
Page Six

Brandy’s daughter thought mom was ‘embarrassed’ of her weight issues

Brandy’s daughter Sy’Rai Smith once thought her famous mom was “embarrassed” by her when she was heavier. “Sometimes I would feel a little sad or feel like she was embarrassed of me,” the 19-year-old revealed on “The Real” Wednesday. However, the teen clarified, “These are just insecurities in my head.”
CELEBRITIES・13 DAYS AGO
TVOvermind

Death is never an easy thing to deal with, but it is especially difficult when it happens to someone who is young and hasn’t gotten the chance to meet their full potential. Sadly, that was the case for up and coming actor, Joey Morgan. The talented young performer was just getting his feet wet in the entertainment industry and he appeared to have a bright future ahead of him. However, his life was cut short in November of 2021 when he suddenly passed away at just 28 years old. Even though he is no longer here, his memory will continue to live on through his work and the countless lives he touched. Keep reading to learn more about Joey Morgan’s legacy.
CELEBRITIES・7 DAYS AGO

Following the teaser the other week, Amazon Prime has now released the full-length trailer for Aaron Sorkin’s new film “Being the Ricardos”. Nicole Kidman stars as sitcom queen Lucille Ball and Javier Bardem as her husband Desi Arnaz in a movie that unfolds against one critical production week of their groundbreaking sitcom “I Love Lucy”.
MOVIES・22 DAYS AGO
HollywoodLife

Kathy Hilton revealed her favorite thing about her daughter Paris Hilton’s memorable wedding earlier this month and gave us some insight on what her future could include, in an EXCLUSIVE interview with HL. Kathy Hilton, 62, thinks Paris Hilton, 40, could become a mother in less than a year after...
CELEBRITIES・2 DAYS AGO
WKBN

Actor and producer Heath Freeman, known for his roles in "NCIS" and "Bones," has died at the age of 41, his manager announced Tuesday.
CELEBRITIES・16 DAYS AGO
Essence

Beyoncé's daughters are showing off their Ivy Park style!. The singer stars in a new ad for her IVY PARK x adidas clothing line, enlisting daughters Blue Ivy, 9, and Rumi, 4, whom she shares with husband JAY-Z, to model pieces from the Halls of Ivy collaborative collection. About halfway...
CELEBRITIES・2 DAYS AGO
HelloBeautiful

Tiffany served body on a Thanksgiving platter in this Stevie the Designer dress.
THEATER & DANCE・2 DAYS AGO