Fully vaccinated Florida father, 58 - whose family said he had NO pre-existing conditions - dies of COVID-19 after spending a month in the hospital

A fully vaccinated Florida father has died from COVID-19 despite having no underlying conditions, according to his family.

Vincent Konidare, 58, of Palm Beach, Florida, passed way on September 19 after spending a month in the hospital battling the disease.

This in spite of the fact that Konidare had received the one-dose Johnson & Johnson COVID-19 vaccine in March.

His family is heartbroken and shocked that over his death.

'He did what he was supposed to do,' Jamie Konidare, Vincent's wife, told WPBF.

'He did what he was told to do. He was trying to protect his family, and he just felt like it was the right thing to do. He felt that if he did get Covid, he would not die, that it would save him.'

Just 6,617 fully vaccinated people have died of Covid in the U.S., according to the Centers for Disease Control and Prevention (CDC).

That's equivalent to one out of every 25,000 of at least 185 million people who are fully vaccinated in America.

Many of the deaths are among people who are seriously vulnerable to the virus for reasons such as being older than age 65, having underlying conditions or being immunocompromised. 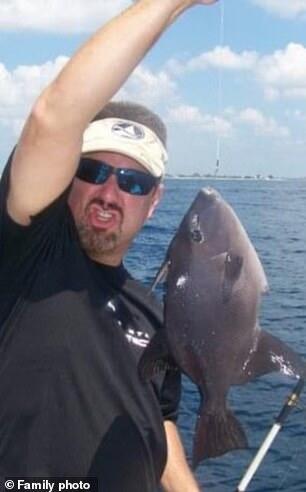 Konidare's family told WPBF that he had no comorbidities, and at only 58, his age did not put him at a large risk either.

He was also active and loved fishing, riding his motorcycle and going to the beach.

He tested positive for the virus on August 2, and his condition deteriorated to the point where he needed to be hospitalized and placed on a ventilator.

After a month in the hospital, Konidare reached a point where doctors said he could no longer receive oxygen, and they told his family that he would soon succumb to the virus.

'We all went to the hospital and we got there just in time to say goodbye,' Jaime said.

'I just want people to know: This was a great guy,' she said about her husband.

'He was an amazing husband, an amazing father, he was a beautiful, handsome, strong, healthy, kindhearted guy who was loved by so many people. The outpouring of love just never stopped.'

Jamie is urging others in her community to get vaccinated, but to not stop following mitigation measures.

'Go ahead and get vaccinated because I still feel like it's the right thing to do but to not let down your guard. You still need to wear your mask,' she told WBPF.

'You still need to stay away from super spreader events and follow all the other guidelines.'

While the vaccine's effectiveness against infection is believed to have waned over time, experts still deem the shots just as effective at preventing serious infection.

The Johnson & Johnson vaccine, which Konidare received, has been administered over 15 million times in the U.S., according to official data.

It is the only one-shot COVID-19 vaccine to receive authorization from the U.S. Food and Drug Administration.

'It's unimaginable grief,' said Jamie. 'He was a beautiful, handsome, strong, healthy, kindhearted guy who was loved by so many people.'

He is also survived by two children.

What they’re doing is giving them Remdesivir then their kidneys fail, lungs fill up with fluid, placed on a vent and sadly they are dying because they’re placed in a coma. Don’t trust these hospitals- why are so many doctors and nurses leaving their long time careers. They know these jabs will give you Covid and or other serious issues! Hospitals are DEATH TRAPS just like this poison they’re shoving down our throats. Sad times and unfortunately it’s going to get worse. These elites have an evil agenda. But God wins in the end- true story- I read the Book! 🙏 🙏 🙏

If "vaxxed" people can get Covid, and pass it along to others, why are "unvaxxed" people getting fired for NOT getting the useless "vaxx"? Things that make you go hmmmmm? 🤔

I don't trust the vaccine at all. It's ridiculous to get it. You can still die from covid with or without it. People have had complications and died from the Jab.

Doctors Say "Do Not" Do This After Your COVID Booster

The arrival of COVID booster shots can give many of us peace of mind that our immune systems are bolstered against COVID-19 this winter. The colder months are a time when viruses of any kind spread more readily because more people gather indoors. But a booster shot isn't a license to be totally carefree. To ensure your booster shot's optimal effectiveness, these are five things you should never do after receiving a booster. Read on to find out more—and to ensure your health and the health of others, don't miss these Sure Signs You've Already Had COVID.
PUBLIC HEALTH・12 DAYS AGO
The Independent

A public health expert who gave America early warnings about Covid-19 has said that there are probably around 2,000 cases of the new omicron variant already in the US.Dr Charity Dean, a former official at the California Department of Public Health, was among the first to warn in February last year that coronavirus was almost certainly circulating among Americans who had not travelled to China.Now she believes that a similar thing is happening with omicron despite the US government’s claim that no cases yet exist in the country, according to an interview with Business Insider."I have no doubt that...
PUBLIC HEALTH・2 DAYS AGO
Best Life

90 Percent of People Hospitalized With Omicron Have This in Common

A new variant first detected in South Africa has health officials around the world on high alert. Now reported in more than 20 countries so far, the Omicron variant has caused a surge in South Africa in a short period of time, increasing new COVID cases in the country from about 300 a day in mid-November to around 3,000 each day, as reported by The New York Times. At the moment, virus experts warn that the data on this variant is still very limited. White House COVID adviser Anthony Fauci, MD, said it will take about two to four weeks to gather more information on Omicron's transmissibility and severity. For now, we can only look to anecdotal data on how this variant is affecting the people it's infecting.
NEW YORK CITY, NY・1 DAY AGO
Best Life

In just one weekend, the Omicron variant seems to have turned the pandemic on its head. This new variant of COVID has nearly triple the number of mutations that Delta has, some of which could make Omicron spread more easily and potentially evade current immune responses. But these are just predictions as of now. Virus experts say it will take some time to gather enough data to determine whether or not this new variant will become more serious than the dominant Delta variant. For his part, White House COVID adviser Anthony Fauci, MD, recently told President Joe Biden that it will take around two weeks to have more definitive information on the transmissibility and severity of this new iteration of the virus.
PUBLIC HEALTH・2 DAYS AGO

At least 6 people have died in Taiwan after receiving a dose of a COVID-19 vaccine developed by Pfizer-BioNTech, according to a health official. Chuang Jen-Hsiang, a spokesperson for the country’s Central Epidemic Command Center, said Tuesday that among the deceased, the youngest patient was an 18-year-old woman. The six people were reported to have died following vaccination. The deaths were reported Monday, reported Taiwan News.
PUBLIC HEALTH・15 DAYS AGO
International Business Times

A real-world retrospective cohort study involving nearly 1.2 million people shows COVID-19 infections in the 'fully' vaccinated are rare but are more common and severe in people with weaker immune systems. The findings, published today in the Journal of Medical Economics, are led by researchers from Pfizer, which has co-developed...
SCIENCE・3 DAYS AGO
The Independent

‘Your baby won’t be affected by Covid’, couple told before three-month-old son dies from virus

A couple has shared the cautionary tale of losing their three-month-old baby in February to Covid.Children under the age of five are not yet able to have the coronavirus vaccine, but mother Angelina Rendon was repeatedly told not to worry about her infant’s safety. “I don’t know how many times a doctor has told me ‘don’t worry, your baby won’t be affected by Covid’ but he was, unfortunately,” said Ms Rendon to Sacramento network KCRA3.“Be careful who touches your baby,” said Ms Rendon, warning other parents with infants of the very real risk of coronavirus. “It can just start with...
RELATIONSHIPS・21 HOURS AGO

The nation's top infectious disease expert says that COVID-19 hospitalizations are rising among people fully vaccinated who have not had booster shots. Dr Anthony Fauci, the director of the National Institute for Allergy and Infectious Diseases, said waning immunity from the initial shots is leading to a rise in severe cases among immunized Americans.
PUBLIC HEALTH・14 DAYS AGO
Business Insider

President Biden's chief medical adviser cautioned that you should wear a mask if you're unaware of the vaccination status of people around you.
PUBLIC HEALTH・11 DAYS AGO
deseret.com

Vegan dies of Covid-19 after refusing vaccine over animal testing

A vegan man who rejected the Covid-19 vaccine citing concerns about animal cruelty, died regretting his decision, his wife said. Glynn Steel “begged for the vaccine,” his wife Emma Steel said, before he was shifted to life support. But by then it was too late for the vaccine to be effective on him, she said.“The last thing Glynn (Steel) said to me was ‘I have never felt so ill, I wish that I had the vaccine’,” Ms Steel, who is double-vaccinated, told The Sun.Just a week after being shifted to the Intensive Care Unit (ICU), a seriously ill Steel died...
AGRICULTURE・3 DAYS AGO
fox2detroit.com

Fauci worried about uptick in COVID-19 hospitalization among fully vaccinated

WASHINGTON - Dr. Anthony Fauci, the nation’s leading expert on infectious diseases, echoed the importance of COVID-19 vaccine boosters following reports of an uptick in hospitalizations among people who have been inoculated. Speaking in an interview with NBC News, Fauci expressed concern over the number of fully vaccinated individuals who...
PUBLIC HEALTH・14 DAYS AGO
WFTV Channel 9 Orlando

ORANGE COUNTY, Fla. — Some local hospital employees are worried they could lose their jobs if they don’t get a COVID-19 shot or fill out their hospital’s religious or medical exemption form. >>> STREAM CHANNEL 9 EYEWITNESS NEWS LIVE <<<. Employees said the hospitals have given them until Dec. 4...
PUBLIC HEALTH・8 DAYS AGO
cbslocal.com

TALLAHASSEE (CBSMiami/NSF) – The number of Florida hospital inpatients with COVID-19 remained relatively flat this week after major decreases in September, October, and early November. The U.S. Department of Health and Human Services posted data Friday that showed 1,383 Florida inpatients had COVID-19. That was up slightly from 1,374 in...
FLORIDA STATE・13 DAYS AGO
FOX 17 News West Michigan

Federal help is expected to start arriving in West Michigan as many hospitals are facing shortages with both staff and beds, and hospitalizations reach a new high in the state due to COVID.
GRAND RAPIDS, MI・2 DAYS AGO
Daily Mail

COVID-19 related hospitalizations made a sharp rise in the last month, as the holiday season gets into full swing and a new threat reaches America in the form of the Omicron variant. According to data from the Centers for Disease Control and Prevention (CDC), nearly 50,000 Americans are in the...
PUBLIC HEALTH・1 DAY AGO
Daily Voice