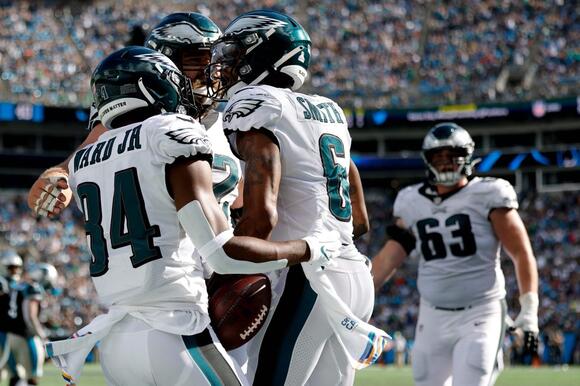 Discover player props odds, plays, and insights for Devonta Smith in his Week 6 contest with the Philadelphia Eagles against the Tampa Bay Buccaneers.

There will be player prop bets available for Devonta Smith before he suits up for NFL action on Thursday at 8:20 PM ET live on FOX. Smith and the Philadelphia Eagles (2-3) take the field against the Tampa Bay Buccaneers (4-1) in Week 6 at Lincoln Financial Field.

Smith won the Heisman and a national title with the Tide last year.
NFL・4 HOURS AGO
Sportsnaut

The Colts traded for Carson Wentz with hopes of becoming contenders. Now they're stuck in purgatory and faced with a brutal decision.
NFL・25 DAYS AGO

The Tampa Bay Buccaneers didn’t need star wideout Antonio Brown to crush the Chicago Bears this past week. But they won’t have him at all this Sunday after the latest team decision. On Friday, Buccaneers head coach Bruce Arians announced that Brown is officially out against the New Orleans Saints....
NFL・29 DAYS AGO
Bleacher Report

Tom Brady seems to be in good spirits following the Tampa Bay Buccaneers' loss to the New Orleans Saints on Sunday. In the latest episode of the Let's Go! with Tom Brady, Larry Fitzgerald and Jim Gray podcast, Brady joked about his relationship with NFL referees and admitted that he's usually in their ear more than most quarterbacks.
NFL・26 DAYS AGO
bucsreport.com

The Tampa Bay Buccaneers are signing a wide receiver. No not that one, a former Buccaneer, wide receiver Breshad Perriman. Look for Perriman to start on the practice squad but soon be elevated to the 53-man roster. There’s no official corresponding move by the Buccaneers yet, but this all but...
NFL・18 DAYS AGO
The Spun

On Thursday night, the Atlanta Falcons hosted the New England Patriots in a matchup between playoff contenders. Atlanta hasn’t looked like the best team all season, but the Falcons entered tonight’s game in the thick of the wild card race. However, after tonight is over, the Falcons will likely be on the outside looking in.
NFL・8 DAYS AGO

FRISCO In more ways than one, Dak Prescott captained his Dallas Cowboys to Sunday’s 43-3 rout of the Atlanta Falcons. Michael Irvin would like his pal Dak to captain his Cowboys in one less way. “We don’t need that TD that bad bro!! @dak don’t do that s-t again!!!! WE...
NFL・12 DAYS AGO
The Spun

The Dallas Cowboys had to play last weekend’s game without their starting quarterback in Dak Prescott. This week, the NFC East leaders could have to play without their starting running back in Ezekiel Elliott. Elliott limped off the field following the Cowboys’ most-recent drive against the Denver Broncos defense. While...
NFL・20 DAYS AGO
The Spun

The Dallas Cowboys’ defense has taken a major hit. Cowboys head coach Mike McCarthy announced on Thursday morning that star pass rusher Randy Gregory will be out for multiple weeks. Gregory, arguably the Cowboys’ best defensive player this season, suffered a calf strain at practice on Wednesday. He will reportedly...
NFL・16 DAYS AGO
Tampa Bay Times

Bruce Arians says Bucs were warned not to rough the quarterback

TAMPA ― The Bucs were warned not to rough the quarterback prior to Sunday’s 36-27 loss at New Orleans that saw Saints starter Jameis Winston suffer a season-ending left knee injury on a horse-collar tackle by linebacker Devin White. Coach Bruce Arians said he informed his team during the week...
NFL・26 DAYS AGO

NFL Hall Of Famer Passed Away This Morning

NFL Hall of Famer Curley Culp passed away early this morning, according to a statement released by his family. The legendary nose tackle’s wife, Collette Bloom Culp, shared a message of her husband’s passing on his Twitter account Saturday. “On behalf of our family and with a broken heart, I...
NFL・10 HOURS AGO
The Spun

The Philadelphia Eagles have agreed to a major contract extension with fourth-year tight end Dallas Goedert. According to reports from NFL Network insider Ian Rapoport, the deal is worth $57 million with $35 million guaranteed, making him the third highest-earning tight end behind George Kittle and Travis Kelce with an average annual salary of $14.25 million.
NFL・8 DAYS AGO
ClutchPoints

In what was inevitable for days, the Los Angeles Rams elected to waive veteran wide receiver DeSean Jackson on Tuesday. The Rams and Jackson reportedly mutually agreed to seek a trade partner ahead of Tuesday’s NFL trade deadline. The Rams failed to find a suitor for Jackson and although he reportedly was open to staying with the team for the remainder of the campaign, Los Angeles still opted to waive him earlier this week.
NFL・23 DAYS AGO
The Spun

The fact that the Dallas Cowboys lost to the Denver Broncos on Sunday isn’t really that shocking, but the manner in which they did is pretty stunning. Dallas was crushed by Denver, 30-16, in a game that wasn’t nearly as close as the final score would indicate. The Cowboys got down to the Broncos, 30-0, before scoring some points in garbage time.
NFL・20 DAYS AGO

Kansas City Chiefs quarterback Patrick Mahomes has impressed NFL fans, media members and opponents with an array of on-the-money deep balls, no-look passes and left-handed throws since entering the league. So much so, that anytime Mahomes throws an interception or makes a bad play, the NFL world is forced to remember that he is still mortal.
NFL・8 DAYS AGO
thespun.com

We’re midway through the 2021 NFL season and the true Super Bowl contenders are finally starting to establish themselves. For FOX Sports commentator Colin Cowherd, there’s a dream Super Bowl matchup that he wants to see. On his most recent podcast, Cowherd said he’s love to see the Dallas Cowboys...
NFL・8 DAYS AGO
okcheartandsoul.com

For the second time this season, the Indianapolis Colts found themselves involved in an NFL rarity: A Scorigami. If you’re not familiar with Scorigami, it’s pretty simple: The internet cheers when the NFL gives us a final score that’s never been seen before and that’s what the Colts’ 41-15 upset win over the Bills gave us on Sunday.
NFL・6 DAYS AGO
Sports Illustrated

Check out odds, plays and more for the Tampa Bay Buccaneers vs. Indianapolis Colts NFL Week 12 matchup on November 28, 2021.
NFL・4 DAYS AGO