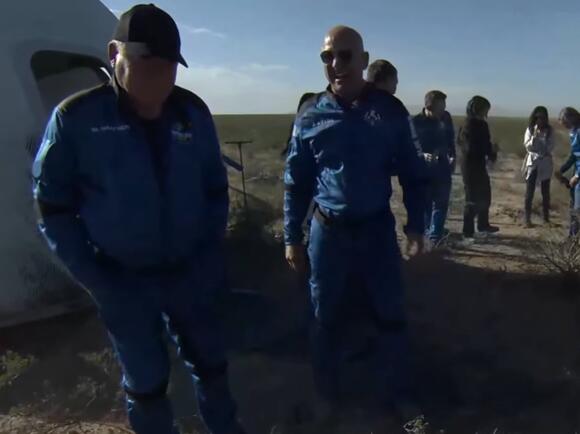 William Shatner turned fiction into reality on Wednesday when he launched into space, decades after his reign as Captain Kirk in the 1966 “Star Trek” series.

The attention, however, was soon turned to the incredibly awkward moment when Amazon founder Jeff Bezos cut off an emotional Shatner to try start a champagne spray party.

When the capsule came back down to Earth in Texas, Jeff Bezos opened it up to ensure everyone aboard was okay. On his return, Shatner summed up his lifelong dream as “it’s fun.”

The Canadian actor then told Bezos: “Everybody in the world needs to do this – it was unbelievable.”

“What you have given me is the most profound experience. I’m so filled with emotion about what just happened. I hope I never recover from this. I hope I can retain what I feel now. I don’t want to lose it”, he added.

As Shatner continued to open up about his profound experience in space, Bezos decided to cut him off mid-speech to pop the champagne.

Shatner looked a bit miffed at being cut-off and ignored - and pointedly turned down some bubbly when offered by the space-loving billionaire.

Social media erupted into a frenzy after experiencing the “cringe-worthy” interruption.

One tweeted: “Massively awkward moment there, as Shatner starts telling Bezos about how profound space was, but all Bezos wants to do is open some champagne.”

“Watching William Shatner having a poetic moment in the middle of a load of billionaires popping champagne is so fascinating”, another added.

“I was watching that part cringing”, another user noted. “This man has had a transformative experience and you want to spray champagne? Ugh. And @MandaEdge I was thinking that same thing as she made SURE she was in that camera shot.”

The 90-year-old actor made history as the oldest person to take off into space aboard the Blue Origin sub-orbital capsule developed by Bezos.

Michael Strahan will be wishing fans good morning from space next month! The 50-year-old Good Morning America co-host announced on Tuesday that he will be going into space with Jeff Bezos' Blue Origin ship on Dec. 9. "In less than three weeks on Dec. 9, I will be blasting off...
NFL・10 DAYS AGO
Vanity Fair

Jeff Bezos is a rich man. The second richest, that is. It’s an insane thing to be second for when you think about it, but someone has got to do it. Now he’s been attending a charitable gala here and there—‘tis the season—and he keeps making headlines at these functions. One for a fun interaction between himself; his girlfriend, Lauren Sánchez; and fellow known quantity Leonardo DiCaprio. And now, at the Baby2Baby gala, for donating pennies on his dollar.
CHARITIES・16 DAYS AGO
Street.Com

In celebration of beloved civil rights leader John Lewis, Amazon ( (AMZN) - Get Amazon.com, Inc. Report) founder Jeff Bezos has pledged a $100 million donation to the Obama Foundation. The gift is the biggest single donation given to the nonprofit organization founded by former President Barack Obama, according to...
HOMELESS・11 DAYS AGO
arcamax.com

Michael Strahan is heading to space on the third human-crew flight of Jeff Bezos’ Blue Origin spacecraft. And he’ll do it soon. “In less than three weeks, on Dec. 9, I will be blasting off in the next Blue Origin space launch,” Strahan said Tueday on “Good Morning America,” prompting co-host George Stephanopoulos to interject, “You’re a brave man, Michael.”
AEROSPACE & DEFENSE・11 DAYS AGO

To paraphrase the original TV series Star Trek, Shatner has always boldly gone where few have gone before. At 90, this is the 11th album release for the acclaimed actor, director, author and auteur. And it is, perhaps, his most revealing work to date, where he reflects poetically on pivotal moments in his personal life and career. Shades of Ken Nordine’s “Word Jazz,” tracks like “Monday Night in London” and “What Do We Know” utilize illustrative word play and clever sound design. Enter the mind of “Bill,” with several guests, including Joe Jonas, Brad Paisley, Joe Walsh, sax man Dave Koz and steel guitarist Robert Randolph.
MUSIC・9 HOURS AGO
Footwear News

Lauren Sanchez posted an Instagram photo in a very festive fall ensemble while celebrating Thanksgiving with her boyfriend, Amazon founder, Jeff Bezos. She smiled for the photo embracing Bezos and chef Charlie Palmer in front of a Thanksgiving feast. The media personality took on the warm weather in autumn look in a strappy dress. The 51-year-old boasted brown in a neutral copper-colored look that had a white printed paisley detail. The dress featured a straight neckline with spaghetti straps as well as a cinched waist and cutouts at her sides. She accessorized her look with a pair of large silver hoop...
CELEBRITIES・4 DAYS AGO
HOLAUSA

Amazon founder Jeff Bezos and his girlfriend Lauren Sanchez made an appearance in a gala in Los Angeles, on Saturday, November 13th. The event, organized by Baby2Baby, a nonprofit that provides children in poverty with diapers and necessities, was attended by a variety of celebrities and supporters. RELATED:...
CELEBRITIES・19 DAYS AGO
Footwear News

Lauren Sánchez arrived to the Baby2Baby 10-Year Gala in LA on Saturday, alongside billionaire boyfriend Jeff Bezos. The perfect pair was snapped smiling in coordinating black outfits. The Amazon founder wore a sharp tuxedo while his partner wore a long gown and black heels. The A-list event was held at the Pacific Design Center to support the nonprofit’s goal to raise money for children in poverty with diapers and other necessities. Kobe Bryant’s widow Vanessa was the guest of honor and was presented with the Giving Tree Award. Earlier this month, Bezos and Sánchez also complemented each other in sparkles and suede at...
DESIGNERS & COLLECTIONS・18 DAYS AGO

Jeff Bezos recently attended a gala for the Baby 2 Baby charity founded in honor of Kobe Bryant's widow. According to an account in the Daily Beast, Bezos kept silent during the donation request, until another attendee donated $1 million, at which point Bezos threw in $500,000. While the Daily...
CHARITIES・6 DAYS AGO
thecountrynote.com

The one hour special will contain an in-depth interview. with William Shatner to begin airing December 3rd at Noon ET. NASHVILLE, Tenn. – Launch into December and lift off with recent history maker and entertainment icon William Shatner! William Shatner joins Country music legend and SiriusXM’s Elvis Radio host T.G. Sheppard to talk Elvis, Star Trek, space, and his new spoken word album ‘Bill’ on SiriusXM’s Elvis Radio Channel 75, starting Friday, December 3 at 12 pm ET. The special will highlight one of Sheppard’s most popular interviews with one of the biggest names in entertainment William Shatner, with continued airings on Saturday, December 4 at 8 am and 7 pm ET, Sunday, December 5 at 2 pm and 10 pm ET, and Monday, December 6 at 7 am ET. This episode will include a full hour with legendary actor, producer, director, screenwriter, author, space tourist, and musician William Shatner. Fans of both Elvis and Sheppard will not want to miss this one-of-a-kind show, which can also be heard on-demand worldwide with the SiriusXM app and Pandora NOW with a standard SiriusXM subscription.
NASHVILLE, TN・1 DAY AGO
Interesting Engineering

Over the past few days, we have been covering how Tesla CEO Elon Musk's personal worth has been soaring along with the company's stock prices. Even as Musk enjoys his time at the top, leaving fellow space rival Jeff Bezos behind, there was an obvious question that needed answering. Where would Bill Gates be, had he not sold his shares in Microsoft?
STOCKS・24 DAYS AGO
fox32chicago.com

CHICAGO - Former President Barack Obama's foundation said Monday it has received a $100 million donation from Amazon founder Jeff Bezos that it says is the largest individual contribution it has received to date. Separately on Monday, NYU Langone Health, a medical center affiliated with New York University, said it...
CHICAGO, IL・11 DAYS AGO

Elon Musk and Jeff Bezos have sold just shy of $20 billion of their companies' shares between them so far this year, as stock sales by CEOs and insiders soar to a record high. Musk has now offloaded $9.9 billion worth of stock in electric-vehicle maker Tesla, after selling a $1.05 billion chunk at the end of November.
STOCKS・1 DAY AGO
MySanAntonio

The highly unsettling and borderline disturbing texts that nearly broke the internet in the wake of the Jeff Bezos cheating scandal apparently came at an exceptionally high cost. A new report by the Wall Street Journal claims that the infamous texts between the Amazon founder and then-mistress, now-girlfriend Lauren Sanchez...
CELEBRITIES・1 DAY AGO
enstarz.com

George Clooney is said to have given up on Amal that he has no choice but to divorce her. Clooney had planned on leaving his rocky marriage with Amal that he also once photographed driving alone. Globe reported that time that the couple developed more tension in their relationship as Amal continuously bossed Clooney around.
CELEBRITIES・15 DAYS AGO
Hello Magazine

Nicole Kidman rarely talks about her relationship with her oldest daughter, Bella, but it looks like the star has the seal of approval from her offspring. In a rare public exchange, Bella showed support for her mother as she shared an exciting moment on Instagram recently. Nicole posted a snapshot...
CELEBRITIES・27 DAYS AGO

A picture of Whoopi Goldberg | Photo: Getty Images. Whoopi Goldberg remains widely loved by her friends and fans and has been a star part of Hollywood for more than three decades. However, marriage and love have not worked out so well for her.
NEW YORK CITY, NY・10 DAYS AGO
Business Insider

The wild life of billionaire Twitter founder Jack Dorsey, who eats one meal a day, evangelizes about bitcoin, and had to defend his company in front of Congress

He is famous for his unusual life of luxury, including a daily fasting routine and regular ice baths. Dorsey announced he had stepped down as the CEO of Twitter on November 29, 2021. Visit Business Insider's home page for more stories. From fighting armies of bots to quashing rumors about...
INTERNET・4 DAYS AGO
Fox News

Meghan Markle's 'Ellen' appearance was the 'opposite of dignified,' says royal author

Meghan Markle appeared on "The Ellen DeGeneres Show" on Thursday and participated in a prank video that split the internet. While many fans praised the Duchess of Sussex for being "down to earth" and showing off her comedy chops, others felt her behavior on the daytime talk show wasn't royal-esque and rather cringeworthy.
CELEBRITIES・14 DAYS AGO