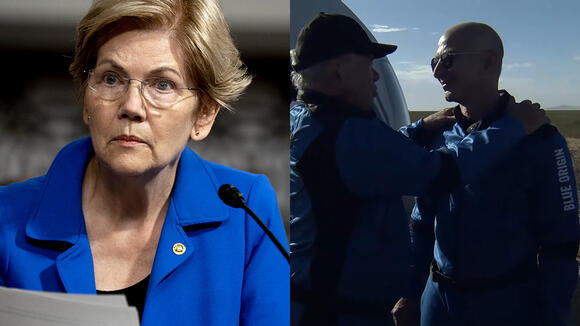 BOSTON (CBS) — William Shatner became the oldest person in space on Wednesday, when the 90-year-old actor who played Captain Kirk blasted off aboard Jeff Bezos’ Blue Origin rocket. It was an exciting day for “Star Trek” fans – but Sen. Elizabeth Warren of Massachusetts used the moment to share a different message about the new age of space travel.

The one-time presidential candidate took to social media with a familiar mantra: The ultra-rich are getting away with paying too little in taxes as they set their sights on the final frontier.

“Giant corporations and billionaires have had a free ride for far too long. Sometimes they take that ride all the way to outer space,” Warren wrote. “They need to start paying their fair share.”

Warren had also criticized Bezos, the founder of Amazon, on the day he went to space in July.

“It’s time for Jeff Bezos to take care of business right here on Earth and pay his fair share in taxes,” she tweeted at the time.

Prior to the Bezos trip, she told TMZ that the billionaire was “laughing at every person in America who actually pays taxes.”

A watchdog group this month said that Amazon has secured $4.1 billion in tax breaks since 2000.

Shatner and three crewmates, two of whom were paying customers, reached the edge of space via Bezos’ hydrogen-fueled rocket, more than 62 miles high. They experienced about three to four minutes of weightlessness.

After landing, Shatner said that his 10-minute trip to space was “so moving to me” and “unbelievable.” He said Bezos had given him the most profound experience imaginable.

“I’m so filled with emotion about what just happened. . . it’s extraordinary,” he told Bezos.

A health coach from Antigua and Barbuda has won two tickets worth almost $1 million to be among Virgin Galactic's first space tourists -- and plans to take the trip of a lifetime with her teenage daughter. Keisha Schahaff, 44, said she wanted to cross the final frontier with her 17-year-old, a science student living in Britain who dreams of one day working for NASA. Virgin Galactic founder Richard Branson surprised Schahaff with the news at her home in the Caribbean in early November. "I just thought I was doing a zoom interview," she told AFP.
AEROSPACE & DEFENSE・2 DAYS AGO
Antelope Valley Press

Virgin Galactic, on Wednesday, revealed the latest addition to its “future astronaut” community, the winner of a sweepstakes announced following founder Richard Branson’s own flight in July. Keisha Schahaff, of Antigua, won two tickets to suborbital space on a Virgin Galactic spacecraft in the sweepstakes held with charity fundraising platform...
AEROSPACE & DEFENSE・2 DAYS AGO
Black Enterprise

Good Morning America co-host Michael Strahan is headed out to infinity and beyond. Next month, the former NFL player will join five others on one of Jeff Bezos’ Blue Origin flights. The mission is set to take off on Dec. 9 on Bezos’s New Shepard rocket. It will be the...
NFL・3 DAYS AGO
Interesting Engineering

A New Challenger for Elon Musk? Another Company Plans to Settle Humans on Mars

Long ago, the writer Edward Albee wrote: "Good, better, best, bested." On a long enough timeline, this might reflect the experience of every major space firm. Since the federal government ruled in favor of NASA's decision to opt for SpaceX's bid to design and deploy a Human Landing System (HLS) to the moon, it's seemed like Elon Musk and his firm will have the lion's share of public-private collaborations for lunar missions, and beyond. But in the coming decade, contestants for this role are lining up.
AEROSPACE & DEFENSE・4 DAYS AGO

Glen de Vries, who flew into outer space with William Shatner last month, died in a plane crash on Thursday at age 49. According to The Sun, de Vries and 54-year-old Thomas Fischer died in the plane crash near Hampton, New Jersey around 3 p.m. yesterday. The FAA notified the authorities that a “single-engine Cessna 172” went missing near Kemah Lake. The plane was supposedly traveling to Sussex Airport from Essex County Airport.
HAMPTON, NJ・14 DAYS AGO
itechpost.com

Glen de Vries, the New York businessman who joined William Shatner and two others on a flight into space on Blue Origin's New Shepard rocket last month, died in a plane crash in New Jersey on Thursday. Thomas Fischer, the owner and lead instructor of Fischer Aviation, also died in the crash. De Vries was 49 and Fischer, who began training de Vries in 2016, was 54.
AEROSPACE & DEFENSE・14 DAYS AGO
Interesting Engineering

Last month we brought you news that William Shatner, the renowned actor who played Captain Kirk in the show and films of the "Star Trek" franchise had launched into space aboard Blue Origin's New Shepard spacecraft. It was an exciting time filled with promises about space adventures that could involve civilians not just astronauts.
AEROSPACE & DEFENSE・14 DAYS AGO

Michael Bay’s 1998 “Armageddon” may have been a critical flop, but the space disaster movie has proven to be prescient as far as astronomy is concerned. Director Bay took to social media this week to tip his hat to NASA, which just launched a 1,200-pound spacecraft into the cosmos to try and slam into an asteroid to stop its path next year. Per the filmmaker, his film almost seemed to predict this very event, as the movie centers on a team of oil drillers and NASA workers who set out to detonate a nuclear bomb in an asteroid. “I told you...
ASTRONOMY・1 DAY AGO
The Independent

A mother in Antigua and Barbuda burst with joy when she found out that she won two tickets for a once-in-a-lifetime commercial trip to space.Virgin Galactic founder Richard Branson surprised health coach Keisha Schahaff, 44, with the two tickets worth $1m (about £750,000) earlier this month at her home in Antigua. She plans to take the trip with her 17-year-old daughter, an astrophysics student living in Britain who wants to work for Nasa in future.“I’ve always had a lifelong love of flying and a fascination with space, and this is truly a dream come true for me,” Ms Schahaff said....
AEROSPACE & DEFENSE・2 DAYS AGO
Fox News

Vice President Kamala Harris spent over $500 on cookware in a Parisian shop amid rising inflation and economic uncertainty at home in the U.S. The vice president visited the shop on her four-day diplomatic trip to Paris last week, reportedly dropping 516 euros on pots and pans at high-end cookware store E. Dehillerin.
POTUS・2 DAYS AGO
CBS New York

NEW YORK (CBSNewYork) — While many people shopped Friday, anti-Black Friday groups took to the streets as part of a global day of action. Dozens of people, including Amazon workers, marched to company founder Jeff Bezos‘ Flatiron District residence in a protest against Amazon’s social and environmental practices. Activists also rallied in Europe, including in England. “If Amazon JFK can unionize, it’ll really pave the way for not just other Amazon warehouse workers but all warehouse workers in New York to, like, help collectively bargain for better qualities of life,” protester Clarissa Hernandez said. A spokesperson for Amazon said the company was the largest...
NEW YORK CITY, NY・14 HOURS AGO

A company melted a $58,000 Tesla into a bust of Elon Musk, and we regret to inform you it looks absolutely nothing like Elon Musk

A Russian luxury accessory brand melted Tesla car parts into a bust of Elon Musk. The sculptures — which look nothing like Musk — are sold for $3,220 a piece on Caviar Global's website. The company also sells iPhone designs made from Tesla parts at a starting price of $5,600.
BUSINESS・1 DAY AGO
GOBankingRates

16 Money Rules That Millionaires Swear By

Being a millionaire or billionaire -- especially a self-made one -- usually requires being disciplined about saving and spending, as well as investing wisely. Although the super rich can splurge on...
PERSONAL FINANCE・2 DAYS AGO
The Hollywood Reporter

Every year, Hollywood gives millions to LGBTQ organizations, partnering with the likes of GLAAD, HRC, The Trevor Project and The Point Foundation for starry galas as A-listers sit on their boards or serve on host committees. But it’s the “T” that seems to have gotten less financial commitment than the rest of the acronym, as transgender organizations report a mixed bag of industry support — even as Dave Chappelle’s transphobic comments in his recent Netflix special brought a renewed spotlight to the issues many trans people still face. “We’re seeing much more thoughtfulness out of Hollywood about trans characters and casting...
LOS ANGELES, CA・3 DAYS AGO
HollywoodLife

John F. Kennedy’s Grandchildren: Meet His 3 Grandkids Who Look Just Like Him & Jackie

Former President John F. Kennedy’s legacy lives on thanks to his three grandchildren, Rose, Jack and Tatiana. Learn about them here. The Kennedys are arguably the most infamous family in American politics. Of course, the best-known member of the family was John F. Kennedy, who served as the 35th President of the United States from 1961 until his assassination on November 22, 1963. JFK had four kids with his wife, former First Lady Jackie Kennedy, but only one — daughter Caroline Kennedy Schlossberg — is still alive today. Caroline has three children with her husband Edwin Schlossberg, which has allowed JFK’s legacy to carry in the form of his grandchildren. Learn all about them below!
U.S. POLITICS・26 DAYS AGO