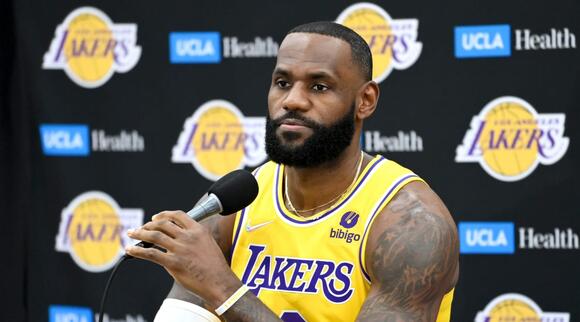 The Lakers star said he isn't frustrated by the team's winless preseason, but he did have a few choice words for the Netflix hit.

Like much of the rest of the country, LeBron James has been captivated by the Netflix show Squid Game . It just turns out that he doesn't like how it ended.

After wrapping up his Wednesday press conference, the Lakers star ran into Anthony Davis at the podium. Davis proceeded to ask James whether he had finished the nine-episode series, which then sparked a debate between the two All-Stars over the show's ending.

"Yeah, I did finish it," James said. "You finish it? You watched it? You done? Yeah, I didn’t like the ending though. I know they start it off with a Season 2, but, like, get on the f------ flight and go see your daughter, bro. Like, what are you doing?"

Clearly, it struck a chord with Davis, who responded with something about "getting my wife back" and finished with the age-old aphorism: "Money talks." The good news is that if you had "LeBron name-drops South Korean currency" on your NBA preseason bingo card, you're well on your way.

For what it's worth, Hornets forward Miles Bridges agreed with the four-time NBA MVP.

Yesterday, Netflix revealed that Squid Game had become the streaming platform's most popular series debut ever with 111 million members tuning in. The South Korean drama was created and directed by Hwang Dong-hyuk and stars Lee Jung-jae as the man who supposedly should have "got on the f------ flight."

Netflix also said that the show is on track to become the platform's highest streaming series of all time, which would make LeBron's thoughts one GOAT's take on another.

Drake’s so-called ‘new parents’ speak out regarding a picture of them together that went viral after a Thunder vs. Rockets game. The couple that went viral consists of Renee, 71, and Jim, 75, who were sitting courtside beside the famous rapper at the Paycom center. Via USA TODAY. “Well, I...
NBA・1 DAY AGO
firstsportz.com

LA Lakers Dwight Howard has proclaimed his love for the serpents. Talk about Medusa having a home after all, and it is definitely going to be Dwight’s house. The 35-year-old plays as a Centre for the LA Lakers and is averaging 5.1 Points, 4.9 Rebounds, and 0.4 assists per game this season with 14 minutes average time on the court. The Lakers have had a catastrophic season till now. With no impressive play to execute it seems as if the Lakers have hit the “artistic slump.”
NBA・8 DAYS AGO
FastBreak on FanNation

Devin Booker sent out a tweet after the Phoenix Suns defeated the Golden State Warriors.
NBA・2 DAYS AGO
The Spun

The Boston Celtics are reportedly interested in a major NBA trade, according to The Athletic. The Philadelphia 76ers continue to hold onto Ben Simmons, though the former No. 1 overall NBA Draft pick has yet to suit up in a game this season. Simmons is reportedly not mentally ready to...
NBA・26 DAYS AGO

Former NBA star Kenyon Martin enjoyed seeing his son, Kenyon Martin Jr., go up against one of his former teammates recently. When asked about Martin Jr. and the Rockets facing Carmelo Anthony and the Los Angeles Lakers on Sunday and Tuesday, K-Mart told TMZ Sports: "It was dope. Strange feeling at first but testament to Melo for one. ... His longevity in his craft. Still playing at a high level."
NBA・28 DAYS AGO
fadeawayworld.net

Almost one week after the incident, the NBA community keeps talking about the scuffle between LeBron James and Isaiah Stewart, where the Los Angeles Lakers superstar hit the Detroit Pistons center in the face, which sparked Stewart's anger. After that unfortunate event, LeBron was ejected for the second time in...
NBA・7 DAYS AGO
fadeawayworld.net

Gilbert Arenas Says Kemba Walker Should Have Expected To Be Benched By The Knicks: "You Should Have Seen This Coming."

Kemba Walker was once one of the best offensive point guards in his prime with the Charlotte Hornets. At his best, he was averaging 25.6 PPG and carrying the Hornets offensively. However, injuries have slowed him down in recent years. He played 18 games for the Knicks this season, averaging...
NBA・1 DAY AGO
Sports Illustrated

Isaiah Stewart Speaks on LeBron James Incident: 'I Didn't Feel Like It Was An Accident'

"I didn't feel like it was an accident. But this is my last time addressing it."
NBA・7 DAYS AGO

Ja Morant has a massive KD IV collection that could go up against any sneaker afficionado’s stash. So much so, that even Brooklyn Nets superstar Kevin Durant himself had to shout out the Grizzlies stud for his eye-popping stack. Durant took to Twitter to give his four-word reaction to a...
NBA・27 DAYS AGO
Indy100

Drake met an older couple at an NBA game who didn’t recognise him - and he soon crowned them his “new parents”.The rapper - who was sitting courtside at the Oklahoma City (OKC) Thunder and Houston Rockets game with a friend - happened to be sitting next to an older couple who didn’t realise that he was a world-known musical artist.As cameras started to show the “Certified Lover Boy,” the older gentleman appeared to ask if he was a notable person.Drake was evidently entertained with the exchange and started to laugh as he called for the camera to focus...
OKLAHOMA CITY, OK・1 DAY AGO
fadeawayworld.net

Dennis Rodman is arguably the biggest wildcard in NBA history. There was no telling what Rodman would do if he was given the opportunity to. While his talent as a defender and a rebounder knew no limits, sometimes he would try to do something reckless and had to be stopped.
NBA・1 DAY AGO
fadeawayworld.net

With about a quarter of the season officially in the rearview mirror, now is the team that teams will begin some serious self-reflection. All around the NBA, there are teams itching for a change, and the Lakers, Kings, and Sixers are probably at the top of that list. Whether it's...
NBA・2 DAYS AGO

Golden State Warriors head coach Steve Kerr knows what Klay Thompson needs to work on in his return. It is still yet to be determined when exactly can Klay Thompson make his Warriors return. However, the All-Star guard already played full contact scrimmages on Tuesday. Revealing how Thompson’s scrimmages went...
NBA・9 DAYS AGO
Yardbarker

The Golden State Warriors have gotten off to a very hot start this year. They currently hold the NBA’s best record, and that’s without Klay Thompson ever taking the court. When Thompson returns in the next few weeks, it could take Golden State to the next level. Presuming, of course, Warriors coach Steve Kerr reintegrates him into the team effectively.
NBA・10 DAYS AGO
Black Enterprise

Potentially enlarging his ownership holdings big time, LeBron James and the Fenway Sports Group (FSG) announced plans to acquire the Pittsburgh Penguins. The group has agreed to purchase a controlling stake in the National Hockey League team. The sale calls for FSG to spend about $900 million, Sportskeeda reported. The...
NBA・3 DAYS AGO
Larry Brown Sports

DeAndre Jordan appears to be on his way to getting DeMoted by the Los Angeles Lakers. Lakers head coach Frank Vogel told reporters this week that Dwight Howard will start for the team Friday against the LA Clippers. Vogel also said that the team will only use one center moving forward, per Harrison Faigen of Silver Screen and Roll.
NBA・1 DAY AGO
Complex

Kyle Kuzma usually gets a lot of attention for his performance on the court, but all eyes were on his attire on Monday night. Before the Washington Wizards faced off against the Charlotte Hornets on Monday, Kuzma entered the arena rocking an oversized pink Raf Simons sweater, and it was tough to miss. Fans and players alike were perplexed by the stylistic decision, as Kuzma wore it while walking to the locker room.
NBA・10 DAYS AGO
ClutchPoints

Klay Thompson just put in his first scrimmage session with the Santa Cruz Warriors of the G League and unsurprisingly, the All-Star shooting guard made an immediate impact. Thompson apparently made his first 18 shots in practice as he made it abundantly clear that rust isn’t going to be an issue for him moving forward.
NBA・4 DAYS AGO
fadeawayworld.net

Whenever the Los Angeles Lakers and Los Angeles Clippers match up, there is always some excitement from fans worldwide, but also in the city of Los Angeles. Those two are generally considered big-market teams who are city rivals, and with that comes a lot of attention. While the Lakers-Clippers game...
NBA・1 DAY AGO
fadeawayworld.net

Doc Rivers Refused To Address Ben Simmons Before Sixers-Celtics Game: "I Literally Don't Even Talk About It. I Coach The Team And The Guys That I Can See Every Day. I Let Daryl And Elton Deal With All Of The Other Stuff."

It seems like Doc Rivers has gotten used to living life without Ben Simmons being on his roster. The Australian point guard was one of the biggest stories of the offseason. Even after things went quiet, people still wonder what is going on with Simmons. Well, Rivers isn't the right...
NBA・1 DAY AGO