NWSL Championship Relocated to Louisville After Backlash From Players 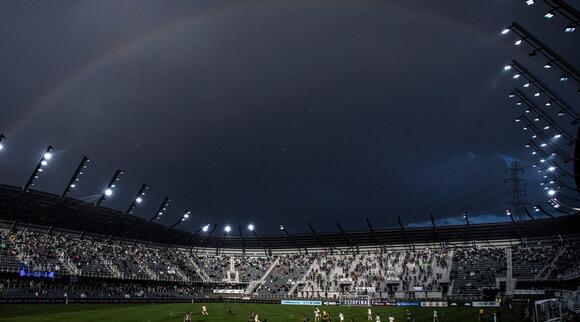 The NWSL championship was originally going to be held in Portland and players had issue with the local start time and the stadium.

The National Women's Soccer League championship has been relocated from Portland to Louisville, the NWSL announced on Wednesday. The move was a direct result of the massive backlash from players who had issues with the original venue and local start time.

"At the request of the players, the NWSL has moved the NWSL Championship from Portland to Louisville," the league said in a statement. "We realize the impact this has on the fans who have bought tickets and made travel arrangements. We hope that our fans will understand that this move is made with the support of the NWSL, the Players Association, the Portland Thorns, and Racing Louisville. Portland understood the importance of listening to the players, and Louisville stepped up to host.

"Players embraced the opportunity to kickoff at noon local time in a fantastic venue. We sincerely hope that fans will consider making this move east with us, or that you watch this historic game on CBS."

The game was originally going to be played at Providence Park, a turf stadium, and would have started at 9 a.m. PT. Players Jessica McDonald , Jessica Fishlock , Rachel Corsie , Ali Krieger and Ashlyn Harris all took to Twitter at the time and shared their disappointment in the local start time and turf field.

But in September The Athletic's Meg Linehan reported that Portland was the only remaining option to host the game. Orlando and Louisville were the only other bids to host the championship but both withdrew their bids, leaving only Portland, per the report. The game is scheduled for the 12 p.m. ET slot on CBS because throughout the fall CBS broadcasts college football at 3:30 p.m which is why a later time slot was not an option.

But with Louisville stepping up, Lynn Family Stadium will be host to the championship. The stadium is soccer-specific and seats a little over 15,000 fans. That, along with the 12 p.m. local start time, the players's requests are satisfied. The date of the game has not changed from Nov. 20.

With a 60-14 win over South Alabama on Saturday night, Tennessee became bowl eligible in year one under Josh Heupel. With a bowl game as a certainty now, we take a look at the latest bowl projections for the Vols with one week remaining. CBS Sports Jerry Palm's Bowl Projections-...
TENNESSEE STATE・6 DAYS AGO
The Spun

Halfway through the fourth quarter, it’s been one of the more memorable battles between Ohio State and Michigan. While the on-field action action has been enjoyed by most (unless you reside in Columbus) some are taking aim at FOX’s broadcast. Throughout the afternoon, viewers have grown frustrated by the lack of replays.
OHIO STATE・1 DAY AGO
The Spun

The Big Ten championship is set and it’s exactly what everyone predicted coming into the season. Alright, maybe not. But it’s what we have following a wild college football Saturday. The Michigan Wolverines finally got past hated rival Ohio State 42-27 and Iowa kind of backed in after two straight...
COLLEGE SPORTS・20 HOURS AGO
Sports Illustrated

Check out odds, plays and more for the Washington Football Team vs. Seattle Seahawks NFL Week 12 matchup on November 29, 2021.
NFL・2 DAYS AGO

What Scott Satterfield, Louisville Players Said After 52-21 Loss vs. Kentucky

LOUISVILLE, Ky. - The latest edition of the Battle for the Governor's Cup ended the same way as the previous two, with Louisville falling to Kentucky in spectacular blowout fashion. Here's what head coach Scott Satterfield, safety Qwynnterrio Cole, running back Jalen Mitchell and wide receiver Jordan Watkins had to...
KENTUCKY STATE・16 HOURS AGO
The Oregonian

Already during coach Mark Parsons’ final season as Portland Thorns coach, the team has won the NWSL Challenge Cup, the Women’s International Champions Cup and the NWSL Shield. With two more victories, the Thorns can bring home one more trophy to celebrate with their outgoing coach, who is stepping down...
PORTLAND, OR・14 DAYS AGO
WGN TV

PORTLAND, Ore. (AP) — Katie Johnson and Sarah Woldmoe each scored and the Chicago Red Stars advanced to the National Women’s Soccer League championship game with a 2-0 semifinal victory over the Portland Thorns on Sunday. Chicago will play the Washington Spirit for the title Saturday in Louisville, Kentucky. The...
PORTLAND, OR・13 DAYS AGO
racingloufc.com

The event will run from 5-9 p.m. Friday near Lynn Family Stadium. The National Women’s Soccer League is excited to welcome fans to Louisville for the 2021 NWSL Championship presented by Budweiser. As part of the celebration, fans are invited to attend Friday’s Butchertown Block Party presented by Mastercard. Located...
MLS・13 DAYS AGO

TACOMA — Ashley Sanchez scored the game winner in the 68th minute and the Washington Spirit advanced to the National Women’s Soccer League championship game with a 2-1 victory over OL Reign on Sunday. The Spirit, undefeated in their last eight straight matches, will face the Chicago Red Stars next...
PORTLAND, OR・13 DAYS AGO
cbslocal.com

Red Stars Are One Game Away From First NWSL Championship

CHICAGO (CBS) — The Chicago Red Stars are on the verge of their first ever National Women’s Soccer League championship. Indeed, we could have two championships for Chicago in women’s professional sports in a matter of a month. Less than two months ago, the Chicago Sky won their first WNBA championship title.
CHICAGO, IL・12 DAYS AGO
lanereport.com

The Washington Spirit’s 2021 season can be split into two. The first portion was arguably as bad as any professional sports team will have this decade. On Sept. 16, the Spirit of the National Women’s Soccer League were below .500, having just forfeited their second game of the season due to violating COVID protocols.
SOCCER・10 DAYS AGO

What Mike Pegues, Louisville Players Said After 77-60 Win vs. Navy

LOUISVILLE, Ky. - Louisville took a step back in the right direction Monday night, responding to their upset loss to Furman with a convincing bounce back win over Navy. Here's what acting head coach Mike Pegues, forward Samuell Williamson and forward Matt Cross had to say following the win:. Acting...
LOUISVILLE, KY・12 DAYS AGO
NBC Washington

How to Watch 2021 NWSL Championship: Washington Vs. Chicago

How to watch 2021 NWSL Championship: Spirit vs. Red Stars originally appeared on NBC Sports Washington. The 2021 National Women’s Soccer League season has been a long and controversial one, but the spotlight will turn back to the pitch on Saturday when a champion is crowned. The Chicago Red Stars...
WASHINGTON STATE・9 DAYS AGO
WNMT AM 650

(Reuters) – A dominant Washington Spirit take on the scrappy Chicago Red Stars in Louisville, Kentucky, on Saturday, as each vies for its first National Women’s Soccer League (NWSL) crown. The Red Stars pulled off a 2-0 upset over the Portland Thorns in their semifinal on Sunday, despite seeing star...
FIFA・9 DAYS AGO
USA Today

The team’s performance took a backseat as focus shifted to the firing of coach Richie Burke after an investigation into alleged violations of the NWSL’s anti-harassment policy. Former players, including Kaiya McCullough, reported emotional and verbal abuse.
WASHINGTON STATE・9 DAYS AGO
Sports Illustrated

Florida State's 2021 season is over after a 24-21 loss to the Florida Gators in Gainesville. The Seminoles fought to the final whistle but it wasn't enough to overcome countless mistakes and an injury to quarterback Jordan Travis. With the coaching staff and team turning their eyes to 2022, countless...
FLORIDA STATE・16 HOURS AGO
sounderatheart.com

A neutral’s recap of the 2021 NWSL Championship

And here we are, the final match of the 2021 NWSL season, the NWSL Championship. Washington Spirit bested the Chicago Red Stars 2-1 in an absolute classic match for the very young NWSL league, a match that required added extra time. Goals from Andi Sullivan and Kelley O’Hara for Washington were what put them over Chicago’s lone goal just before halftime by Rachel Hill.
SOCCER・7 DAYS AGO
Sports Illustrated

"It was tough. They played well offensively in the first half, we were trying to get them off the field, couldn’t do it, so we got behind. I was pleased we started the second half with a score, and we were going to have to chase from there. Guys continued to battle but didn’t play well enough to beat a good football team at their place. Disappointing, obviously, but we’ve got another game to play."
OREGON STATE・16 HOURS AGO
WLKY.com

Washington Spirit win NWSL Championship game, but some say city of Louisville is the real winner

LOUISVILLE, Ky. — On Saturday, Lynn Family Stadium was home to a National Women's Soccer League showdown between the Washington Spirit and Chicago Red Stars. The club from D.C. won it. However, even though those ladies are taking home a trophy, some say the city of Louisville is the real winner.
WASHINGTON STATE・7 DAYS AGO