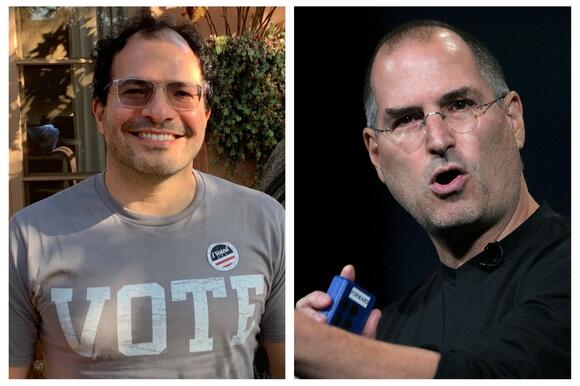 "Fake it 'till you make it" is a phrase widely heard in Silicon Valley for entrepreneurs who are starting and approach investors to convince them to participate in their idea or even sell their business .

However, believing yourself more than you really are can be very counterproductive and even miss out on once-in-a-lifetime opportunities.

This was narrated by Ali Partovi , who in 2008 was the CEO of iLike, a startup that had aroused the interest of Apple . The entrepreneur took advantage of the fact that last week the apple company celebrated the life of Steve Jobs to remember the occasion when he lied to the co-founder of the Cupertino company and lost the opportunity of a life.

Through a Twitter thread , Partovi narrated that at that time his company iLike offered integration between Facebook, iTunes and Windows Media Player and gave recommendations to users. It was so popular that at that time it accumulated 60 million Internet users.

On Twitter, Partovi says that success sparked Apple's interest at a time when they were under a lot of pressure from record companies and Facebook. Then there was the meeting between the three co-founders of iLike and Eddy Cue and Steve Jobs of Apple.

Overall the pitch seemed to be successful. Even Jobs stated: “I like them. They have good arguments. It seems like they would be a good fit for Apple. I want to buy your company. I'll let Eddy clarify the details with you. "

And in that moment, everything went to hell.

"I know we are worth 3 times more than that"

At the time, Partovi asked Jobs what the range of money they were considering was.

“This was a rookie move. I wish my mistakes had ended there. The worst was yet to come ”, says the entrepreneur on his Twitter.

Jobs asked him “What is your income? What was your last assessment? Partovi heard that Apple would pay them the same figure that they had reported a few years ago, which meant they had not created new value. He told Jobs that his investors would not accept that deal to which the Apple co-founder told him that they would take care of that.

Then Partovi made the mistake of his life:

Jobs was furious and replied bluntly: “You say you know you are worth more? Do you have another offer? Shit, you're lying to me. You are full of shit. We're done". The Apple co-founder got up from the table and left the boardroom, leaving Eddy Cue explaining.

There, the iLike opportunity is over. Cue tried to keep the bargain for a smaller sum, but Jobs was no longer interested. Shortly after Apple released the Genius bar for iTunes and Facebook which had similar functionalities to iLike.

The difference between "knowing" and "believing"

You ask yourself "What was the lie that made Steve Jobs angry?"

Partovi answers it on Twitter with the clarity that the years after an experience give: "the difference between believing and knowing what your company is worth comes down to one thing ... real figures."

At one point, in a later call, Steve told him point blank, "You are a liar and I don't trust anything you say."

“The hard truth is, I can't blame him: trust can be ruined with a single word and it's not easy to rebuild.

“Never exaggerate your value when negotiating a big deal - especially not against a stronger player. There are ways to be a strong negotiator without lying. "

A year after the encounter with Apple, Partovi and his partners sold their company at a loss.

The entrepreneur dusted himself off and later founded Neo , a community of mentors and a venture capital fund that brings together tech veterans to accelerate the leaders of tomorrow. He is also a co-founder of Code.org , a center for programming courses for young people around the world.

Steve Jobs taught me to be paranoid about the fine line between hype and lies: it can be as subtle as a word. If you cross that line, you can destroy yourself. I am grateful to him for this lesson ”.

Midlife Entrepreneurs Have a Lot of Life Left in Them

As many of Generation X and some early Millennials are moving into midlife, they are breaking the barriers our Baby Boomer teachers told us would never be possible. As Jeff Bezos and Elon Musk are showing us, the sky is no longer the limit. Thanks to social media and smartphones we no longer need to know all the information by heart, and we have a calculator in our pocket at all times!
ECONOMY・10 DAYS AGO
8 News Now

The "Great resignation" has millions of workers turning their hobbies and side hustles into businesses.
INTERNET・14 DAYS AGO
PIX11

Latina entrepreneur at the forefront of businesses focusing on remote working

Remote working is a lifestyle that many workers and employees have embraced since COVID forced people to turn their homes into office spaces. Now, it looks like working from home might be here to stay for many companies. Entrepreneur Silvina Moschini was ahead of the curve when it comes to remote work. She’s figured out […]
ECONOMY・3 DAYS AGO
Daily Mail

Companies that donated to the Black Lives Matter (BLM) Global Network Foundation - including Amazon, Intel and Microsoft - have yet to weigh in on the movement’s call to boycott white companies this Christmas, despite the group profiting from corporate donations. The organization on Instagram urged its supporters to participate...
ADVOCACY・1 DAY AGO

Elon Musk and Jeff Bezos have sold just shy of $20 billion of their companies' shares between them so far this year, as stock sales by CEOs and insiders soar to a record high. Musk has now offloaded $9.9 billion worth of stock in electric-vehicle maker Tesla, after selling a $1.05 billion chunk at the end of November.
STOCKS・1 DAY AGO
hackernoon.com

Elon Musk is Proof of Social Currency and Community Governance

Musk Metaverse is a set of new cryptocurrencies, NFT assets, and a multiplayer online space game. Along with a $METAMUSK token, four other tokens honor Musk’s most notable projects: $SPACEX, $TESLA, $NEURALINK, and $STARLINK. Developers hope to make the project a vital part of the budding cryptos run by the team at the end of the year. With big companies like Google, Microsoft, Microsoft and Google already eyeing the Metaverse.
STOCKS・21 HOURS AGO
Fortune

Subscribe to Fortune Daily to get essential business stories delivered straight to your inbox each morning. To most people, Ursula Burns, the former CEO of Xerox, is largely famous for two things. First, and most significantly, for being the first Black woman to run a Fortune 500 company. And second, for her astonishing candor. “The thing I valued most about Ursula, and why I valued her participation in senior management, is that she has the courage to tell you the truth in ugly times,” Anne Mulcahy, Burns’s friend, mentor, and predecessor CEO, once told me.
ECONOMY・1 DAY AGO
MarketWatch

After a weeklong lull, Elon Musk has sold another $1 billion worth of Tesla Inc. stock, continuing a nearly monthlong selloff that is expected to continue.
STOCKS・22 HOURS AGO

Is MercadoLibre on Its Way to Becoming One of the World's Biggest Tech Companies?

The Altered Course Of Digital Revolution In the Coming Year

You're reading Entrepreneur India, an international franchise of Entrepreneur Media. The coronavirus pandemic struck a devastating blow to the business world. It is a major understatement that 2020 was not the best year to open a recreational business such as a yoga class or a theme park. However, despite the overwhelming evidence in favor of the belief that the business world was dealt a terrible hand by the pandemic, looking back at the data of the past two years, we see that pent up consumer demand coupled with a digital metamorphosis of both the business world as well as the household has led to a powerful comeback for the industries of the future, with many companies now reporting close to pre-COVID level revenues, even in industries that seemingly suffered due to the incessant lockdowns, including, but not limited to, auto companies and shopping malls are reporting revenues and footfalls close to pre-COVID times, which is nothing short of an unbelievable economic phenomenon.
TECHNOLOGY・18 HOURS AGO
Entrepreneur

For the past few decades, it was assumed that rising startups would opt for exact brand match domain names ending in the legacy top-level domain (TLD) .com as soon as they could fund the acquisition. Recently released data, however, is challenging this notion. According to data recently shared by Marc Köhlbrugge, founder of the startup launch platform BetaList, early-stage startups are choosing descriptive domains more frequently than in previous years.
ECONOMY・12 HOURS AGO
Entrepreneur

3 Things Women Leaders Transitioning From Corporate Should Understand About Entrepreneurship

For leaders who have had a long corporate career, taking the leap into entrepreneurship can be exciting and confusing.
ECONOMY・11 HOURS AGO

Most of us have heard the dictum "the trend is your friend." And this is undeniably the key to success when it comes to short-term investing or trading. But it isn't easy to ensure the sustainability of a trend and profit from it. The trend often reverses before exiting the...
STOCKS・11 HOURS AGO
Entrepreneur

Looking for ways to improve company productivity and communications? Start with your email.
TECHNOLOGY・11 HOURS AGO
Entrepreneur

The messages direct their recipients to the r/antiwork subreddit, which gained traction during the Covid-19 pandemic when workers began advocating for more rights.
TECHNOLOGY・10 HOURS AGO
Popular Science

10 free Photoshop and other alternative programs you need to try

Don't spend money you don't need to on software when you can get free alternatives to Photoshop and other popular programs. Bram Naus/UnsplashTop-quality software that costs nothing.
COMPUTERS・11 HOURS AGO
MarketWatch

What makes Spotify's Wrapped such a popular end-of-year tradition? FOMO

Embarrassed about how many hours you spent listening to the Counting Crows? Why experts say that won't stop you from sharing Spotify's Wrapped.
MUSIC・6 HOURS AGO
Entrepreneur

4 Ways to Spark Your Creativity

Many of us lose touch with our creative intuition over time and bury it deep down inside.
RELATIONSHIP ADVICE・3 HOURS AGO
WLNS

Microsoft CEO cashes in half of his shares

The CEO may have been motivated by a Washington state law which comes into effect next year.
STOCKS・7 HOURS AGO