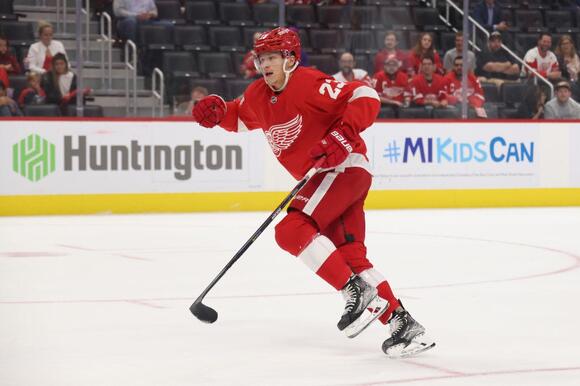 The Red Wings will be improved this season.

It is just a matter of how much.

The biggest upgrade will come on the blueline. Nick Leddy is one of the NHL’s best puck movers, the ideal defensive pairing for high-end rookie Moritz Seider, Detroit’s rugged first-round draft pick in 2019.

Down the line, the defensive corps will be better because Troy Stecher, Marc Staal and Danny DeKeyser have been retained. There is no need to play Filip Hronek an inordinate number of minutes, which should improve the quality of his play.

The Red Wings have had endless issues in recent seasons, not the least an abysmal power play. Their zone entries were much better during the preseason, both on the man advantage and at even strength. It should pay off in more power play goals and much better puck possession metrics, which will mean more victories.

The return of Tyler Bertuzzi, and the additions of 2020 first-round draft pick Lucas Raymond and free agent Pius Suter, also improves the Red Wings’ talent level upfront. The biggest beneficiary should be Dylan Larkin. The Wings’ captain had just one power play goal last season. He undoubtedly will have much more this season.

The Red Wings’ goaltending should be solid with Alex Nedeljkovic and Thomas Greiss. There is more NHL-caliber depth at Grand Rapids, too.

I don’t see the Red Wings, especially without injured winger Jakub Vrana, as a playoff team, but they should be much closer than in recent seasons.

General manager Steve Yzerman has done a terrific job of putting the Red Wings in position to make strides. You will start seeing genuine progress this season.​

Justin Danforth is confirmed to make his NHL debut tonight for the Columbus Blue Jackets. Adam Boqvist makes his return from injury, slotting in for Gabriel Carlsson. Elvis Merzlikins starts in net. Joe Veleno has been called up from Grand Rapids to replace Mitchell Stephens in the Detroit Red Wings...
NHL・14 DAYS AGO
97.1 The Ticket

Holland said he made good decisions and bad decisions during his tenure as GM, “probably lots” of both. By the end, he said “it was time for change.”
NHL・20 DAYS AGO
wingingitinmotown.com

When the going gets tough for the Red Wings

If you’re reading this, you’re probably having a much better time watching the Red Wings than you’ve had in years. They’re playing hard, scoring at a higher pace, and pushing to be better with every outing. There’s a lot to love about this team. From the fresh faces to the development of chemistry, every game, no matter the score, has something exciting going on.
NHL・12 DAYS AGO

There are some people out there who will claim not to be surprised by seeing Tyler Bertuzzi rank first among the Detroit Red Wings in terms of goals scored (he currently has nine.) However, if any of you out there claim to not be surprised by who sits in second on that same list with seven goals, let’s just say that I’ll be a bit skeptical.
NHL・14 DAYS AGO
Yardbarker

What’s The Grind Line? Apart from the once-famous line of Kris Draper, Kirk Maltby, and either Joe Kocur or Darren McCarty, The Grind Line is also The Hockey Writers’ weekly column about the Detroit Red Wings. This week Tony Wolak, Devin Little, Patrick Brown, and Kyle Knopp are the muckers who make up THW’s forechecking unit and sound off on Red Wings topics.
NHL・14 DAYS AGO
wingingitinmotown.com

Well that was a fun weekend. Detroit was a great host for Saturday, but just like the Wings I had to hit the road. Columbus sits sixth in the tight Metro division with 14 points, which is four behind the Red Wings. However, since they have four games in hand, the Jackets’ 7-5-0 record gives them a higher points percentage than Detroit.
NHL・14 DAYS AGO
Yardbarker

It’s no secret that the Detroit Red Wings‘ prospect pool boasts its greatest depth on the blue line. After drafting a total of 13 defensemen over the last three drafts, the Red Wings seem poised for a future where defense will be the strength of the team. The guys on this list are a big reason for that, and their continued development outside of the NHL has been encouraging to watch.
NHL・11 DAYS AGO

Navigating the salary cap is one of the more important tasks for any GM. Teams that can avoid total cap chaos by walking the tightrope of inking players to deals that match their value (or compensate for future value without breaking the bank) remain successful. Those that don’t see struggles and front office changes.
NHL・10 DAYS AGO
defendingbigd.com

A players only meeting, a lineup shuffle and apparently that’s all they needed: the Dallas Stars finally have a regulation win under the belt. It only took 13 games but, hey, who’s counting?. Dallas looked much better Saturday night against a pretty good Philadelphia Flyers team. The Stars offense came...
NHL・13 DAYS AGO
NHL

DALLAS -- Jake Oettinger made 28 saves in his season debut for the Dallas Stars, a 5-2 win against the Detroit Red Wings at the American Airlines Center on Tuesday. "I just tried to put myself in a good spot and take away the lower half of the net and be patient," Oettinger said. "Obviously, those guys are so good in tight. Thankfully, I was able to come up with a few saves in tight there. Those were turning points in the game, and it's the goalie's job to step up, especially if you let in a couple goals that aren't the strongest, it's important to respond and give those guys confidence."
NHL・12 DAYS AGO
wingingitinmotown.com

Red Wings Slip Away in Columbus, 5-3

Detroit came into Columbus hoping to get another winning streak going after a nice OT win against Montreal on Saturday. Instead they got a sloppy game that they could never quite wrangle, and it’s a little tough to pinpoint just exactly what was the issue. Greiss made a lot of stops, but also let in a few he’ll want back. The team played well in Columbus’s end, but couldn’t stay there long enough. They just couldn’t play tighter D than the Jackets. It was nothing major, but you can read below to see the numerous little errors that led to the loss.
NHL・14 DAYS AGO

Dylan Larkin returns to lineup for Red Wings at Vegas

Detroit Red Wings captain Dylan Larkin joined his teammates on the ice for the morning skate today at T-Mobile Arena following a false positive COVID-19 test result on Tuesday. He will be in the lineup for tonight’s game against the Vegas Golden Knights (10 p.m., Bally Sports Detroit). Larkin was...
NHL・11 DAYS AGO
FanSided

The Detroit Red Wings play their final road game of the week when they visit the Arizona Coyotes tonight at Gila River Arena in Glendale, AZ. Game time is 8:00 PM ET. Detroit have lost their opening three games of the four-game road trip. This is the first of two meetings between the two clubs.
NHL・9 DAYS AGO
Yardbarker

Red Wings’ Zadina is Far From A Problem

Maybe it’s the hockey media’s fault for bringing up Zadina’s infamous “fill their nets with pucks” quote again and again (I know I’m guilty of it.) Maybe it’s his fault for saying it in the first place. While I am hesitant to blame an 18-year-old for showing confidence and swagger on their draft day, it no doubt put a target on his back not only for fans of the Montreal Canadiens and other teams, but for fans of the Detroit Red Wings as well. With just 18 goals through the first 106 games of his career, there haven’t been enough pucks to make one layer in the back of the net, let alone fill it.
NHL・8 DAYS AGO
MLive.com

Red Wings after 20 games: the good and the concerning

The Detroit Red Wings have made progress roughly one quarter of the way through the season, though it might not seem like it on the heels of a four-game skid. At 8-9-3 after the 20-game mark, the Red Wings’ points percentage (.475) is appreciably better than it was at the end of last season (.429), despite missing Jakub Vrana, one of their key offensive players due to preseason shoulder surgery.
NHL・7 DAYS AGO
markerzone.com

Following Tuesday's practice, Detroit Red Wings head coach Jeff Blashill announced that defenceman Troy Stecher and forward Mitchell Stephens will be out until after the Olympic break in February, so roughly three months. Stecher, 27, underwent wrist surgery recently, and has only appeared in six games this season, tallying one...
NHL・6 DAYS AGO
Yardbarker

Red Wings’ Nedeljkovic Is the Top Goaltender in Detroit

When the trade for Alex Nedeljkovic was announced, the chatter around Detroit wasn’t about how he could form a solid tandem with incumbent goaltender Thomas Greiss. No, the conversation immediately jumped to how “Ned” could be the Red Wings’ starter during the 2021-22 season and well into the future. After watching Greiss, Jonathan Bernier and Jimmy Howard man the crease over the last few seasons, it was refreshing to imagine the 25-year-old Calder Trophy-finalist arriving in “Hockeytown” and stabilizing a position that was surrounded by question marks prior to the trade with the Carolina Hurricanes.
NHL・6 DAYS AGO
NHL

BLUES The St. Louis Blues fell behind 2-0 on Monday night before they responded with five unanswered goals to earn a 5-2 win against the Vegas Golden Knights. The win included three goals in a span of 2 minutes and 15 seconds in the first period to help the Blues quickly erase the early two-goal deficit.
NHL・6 DAYS AGO
Yardbarker

Welcome back to Red Wings Wednesday Weekly! In this weekly column, we will take a look at the Red Wings’ most-recent week of play, identify any players and/or trends that stood out, and then look ahead and find out what the next week may have in store for the team from Hockeytown. As always, feel free to share your thoughts in the comments section down below.
NHL・5 DAYS AGO