Lewis Hamilton could face another grid penalty this season due to reliability concerns over the Mercedes engine.

The seven-time world champion took on a new Internal Combustion Engine (ICE) at the Turkish Grand Prix which cost him pole position, as he was relegated to 11th on the grid after setting the fastest time in qualifying.

Hamilton raced back to finish fifth, although he lost the lead in the drivers' championship to Max Verstappen, who finished second behind Valtteri Bottas.

The Brit is now six points behind the Dutchman in the fight for this year's title, and Mercedes team principal Toto Wolff has refused to rule out another grid penalty before the end of the season.

Wolff told Sky Sports F1: 'It (the ICE) can last until the end of the season but there could be a moment we say it is worth taking a fresh one because the other one is still at risk.'

Hamilton's new ICE in Turkey was his fourth of the season - which is one more than permitted in the sport's regulations.

A fifth power unit would lead to another grid penalty and would match the number used by team-mate Bottas in the other Mercedes. 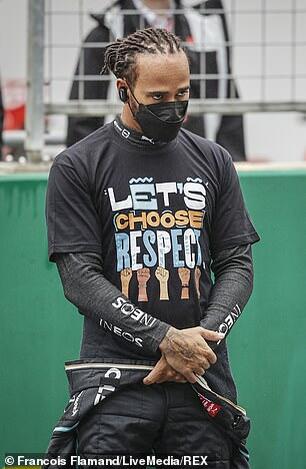 Mercedes boss Wolff said that Mercedes 'had to' change the engine component in Turkey to reduce the chance of a mechanical failure which would have resulted in Hamilton not scoring a single point.

The Austrian team principal said: 'We had to do it (the engine component change). We saw some data on the Internal Combustion unit that didn't look very promising and a DNF is a total killer for the championship.'

He added: 'We've seen over the course of the season that we've had some little gremlins that we weren't completely sure where they came from and how much performance they could potentially cost.

'I think we understand much better now where the root cause lies and it's something that can happen from time to time if you just have a material issue, a batch problem and these are the things you need to consider.'

Grid penalties could be crucial in the outcome of this year's championship battle between Hamilton and Verstappen.

The Red Bull driver had his own engine penalty at the dramatic Russian Grand Prix, in which he clawed his way from 20th place to second after a late rain shower boosted his progress.

After the Turkish Grand Prix, Hamilton said that he 'didn't give any energy' to concerns over the reliability of his Mercedes engine.

He added: 'It's not my job to worry about that stuff, so I let the guys focus on that, worry about it.

'My engine is in good condition. My first engine, I think, did six races. We still have engine two, and I think engine three is still there.

'As far as I'm aware, hopefully I don't have to (use a fifth engine), but I can't predict what's up ahead.'

Remaining races will see the teams travel to the United States, Mexico, Brazil, Qatar, Saudi Arabia and the season finale in Abu Dhabi on December 12.

Following the Sao Paulo Grand Prix, Mercedes team principal Toto Wolff likened his team's race weekend to being punched multiple times in the face. He said he was "angry" that decisions by the FIA stewards had consistently swung against his team and went on to say that, from his perspective, the time for "diplomacy has ended".
MOTORSPORTS・10 DAYS AGO
NBC Sports

Already facing a five-spot grid penalty, Lewis Hamilton could face further punishment for the Brazilian GP if Formula One confirms something is amiss with his Drag Reduction System while Max Verstappen could also receive a penalty for touching the No. 44 Mercedes in the parc ferme after qualification. Hamilton’s car...
MOTORSPORTS・14 DAYS AGO
The Guardian

The world champion will take a five-place grid penalty and could also lose pole position in the sprint race amid an investigation
MOTORSPORTS・14 DAYS AGO
racingnews365.com

Will Verstappen follow Hamilton in taking a grid penalty?

Christian Horner has spoken about Red Bull and Honda's engine plans for the remainder of the 2021 season. Red Bull team boss Christian Horner has rejected suggestions that Max Verstappen could respond to Lewis Hamilton's engine-related penalty at the Brazilian Grand Prix by taking a grid drop of his own.
MOTORSPORTS・15 DAYS AGO

While Hamilton does not take an official pole for his one-lap efforts, his 0.438s advantage over Verstappen was his biggest of the season in a dry shootout and he will head the field for Saturday's 24-lap Sprint before taking his five-place grid penalty for Sunday's showpiece race. F1 Sprint: Hamilton,...
MOTORSPORTS・14 DAYS AGO
The Independent

Mercedes team principal Toto Wolff has explained his frustrations over weekend events at the Brazilian Grand Prix, feeling decisions went rather more in favour of their rivals.Lewis Hamilton eventually triumphed to win in Sao Paulo, despite a series of setbacks both before and during the race.Ahead of the main event, Hamilton was excluded from qualifying due to a DRS infringement, which Wolff feels was a contradiction to how Red Bull have been treated - but it was the move by Max Verstappen during the race itself which was the biggest sticking point and which should have seen the championship leader...
MOTORSPORTS・12 DAYS AGO
SkySports

The verdict - coupled with Lewis Hamilton's disqualification from qualifying for a DRS breach on his Mercedes - means Verstappen has inherited first on the grid for tonight's Sprint at Interlagos. Hamilton, who qualified top, learned his fate shortly after Verstappen and will start at the very back of the...
MOTORSPORTS・14 DAYS AGO
ESPN

Lewis Hamilton was reluctant to blame Max Verstappen for running him off the track at the Sao Paulo Grand Prix, saying the incident that saw them nearly make contact at Turn 4 was "hard battling". Hamilton won Sunday's race to close the gap to Verstappen in the championship to 14...
MOTORSPORTS・12 DAYS AGO

Mercedes chief Toto Wolff slammed Red Bull’s Max Verstappen, calling his defense "laughable" after Lewis Hamilton claimed a sensation victory in Sao Paulo on Sunday. A frustrated Verstappen defended from Verstappen robustly but could not stop the Brit from winning the race despite starting at P10 on the grid. Mercedes...
MERCEDES, TX・12 DAYS AGO
SkySports

It was a dramatic turnaround on a rollercoaster weekend for Hamilton, after suffering a qualifying disqualification and an engine penalty, and he capped his display by defeating Verstappen in another epic wheel-to-wheel duel. Hamilton, having soared through the field in the early stages, and Verstappen, after passing Valtteri Bottas for...
MOTORSPORTS・13 DAYS AGO
ClutchPoints

Red Bull boss Helmut Marko seems terrified of Lewis Hamilton’s engine advantage despite Max Verstappen’s lead in the F1 driver standings. After winning the Brazilian Grand Prix starting at P10, Hamilton completed a successful drive, but it is also a fact that he had a new engine. Via Express UK.
MOTORSPORTS・10 DAYS AGO
blackchronicle.com

• Previously worked in rugby union and British Superbikes. An investigation into the legality of Lewis Hamilton’s car at the Sao Paulo Grand Prix took a remarkable turn on Friday night when the stewards overseeing it adjourned their hearing and called on his title rival Max Verstappen to report to their office the following morning.
MOTORSPORTS・14 DAYS AGO

Martin Brundle believes that the best way for Lewis Hamilton to beat Max Verstappen to the Formula 1 Drivers’ Championship could be for the Briton to take another five-place grid penalty at this Sunday’s Qatar Grand Prix.The seven-time world champion did exactly that at the Brazilian Grand Prix last time out, storming through from tenth on the grid to pass Verstappen out front and ultimately take one of the finest victories of his stellar career.Mercedes had opted to install a brand new internal combustion engine into Hamilton’s power unit for the Interlagos race, willingly incurring the starting penalty after...
MOTORSPORTS・10 DAYS AGO
The Independent

Lewis Hamilton breathed fresh life into his dreams of securing a record-breaking eighth world championship following a superb victory in Brazil.The Mercedes driver is now only 14 points behind Red Bull’s Max Verstappen with three rounds remaining.Here, we look at the key factors that might determine the fate of this season’s brilliant title race.Experience vs YouthHamilton’s 101st career victory moved him 10 clear of Michael Schumacher as the most decorated winner in Formula One history.With seven championships already under his belt, and a contender in three title deciders in 2007, 2010 and 2016, this season marks the 11th time...
MOTORSPORTS・12 DAYS AGO
buckinghamshirelive.com

Mercedes have requested a review of the decision not to penalise Red Bull driver Max Verstappen for a move made in Sunday's Sao Paulo Grand Prix. The incident with Lewis Hamilton on lap 48 came on the defending champion's first overtake attempt on his rival, with the pair both going off the track.
MERCEDES, TX・11 DAYS AGO
buckinghamshirelive.com

Red Bull technical advisor Helmut Marko has conceded that he thinks Lewis Hamilton holds an advantage in the title race despite Max Verstappen's lead in the championship. Hamilton's sensational drive at the Sao Paulo Grand Prix saw the Mercedes ace cut Verstappen's lead to 14 points heading into the final three races of the season.
MOTORSPORTS・11 DAYS AGO
ESPN

SAO PAULO, Brazil -- Lewis Hamilton keeps raising the bar. Maybe that shouldn't be a surprise anymore. Hamilton had to wait a couple of months to score his 101st F1 victory but when it came, it came in a style Hamilton has turned into an art form. Give Hamilton an ordinary car and he will deliver great things. Give him the rocket ship he drove on Sunday and he might as well be on a different circuit to the rest.
MOTORSPORTS・12 DAYS AGO
The Independent

Mercedes team principal Toto Wolff admits he was unsurprised to see a right for review against Max Verstappen denied as the most thrilling Formula One title fight in years spilled over into a war of words with Red Bull boss Christian Horner Lewis Hamilton took the chequered flag at the Brazilian Grand Prix last weekend to close the gap in the drivers’ championship to 14 points with three races remaining.But Verstappen escaped punishment for running his rival off the road as they duelled for first position on lap 48.BREAKING: Stewards reject Mercedes appeal into incident between Hamilton and Verstappen in...
MOTORSPORTS・8 DAYS AGO
Daily Mail

Max Verstappen insists he DOESN'T 'need to look at the footage' of his Red Bull running Lewis Hamilton off track at the Sao Paulo GP... but the world champion says he has a 'different viewpoint now'

Max Verstappen insists he has not watched his incident with Formula One title rival Lewis Hamilton from the Sao Paulo Grand Prix which could yet land the Red Bull driver with a penalty. Hamilton took the chequered flag at Interlagos to close the gap in the title race to 14...
MOTORSPORTS・9 DAYS AGO
Telegraph

'Fair and hard racing': Max Verstappen insists he did nothing wrong in Lewis Hamilton duel at Brazilian GP

Max Verstappen has insisted that he did nothing wrong in his duel with Lewis Hamilton at last weekend’s Brazilian Grand Prix, saying he would have spun off the track on his “worn tyres” had he turned in any more aggressively. After deliberating for around four hours on Thursday night, FIA...
MOTORSPORTS・8 DAYS AGO