Coming off first loss, No. 5 Alabama heads to Mississippi State 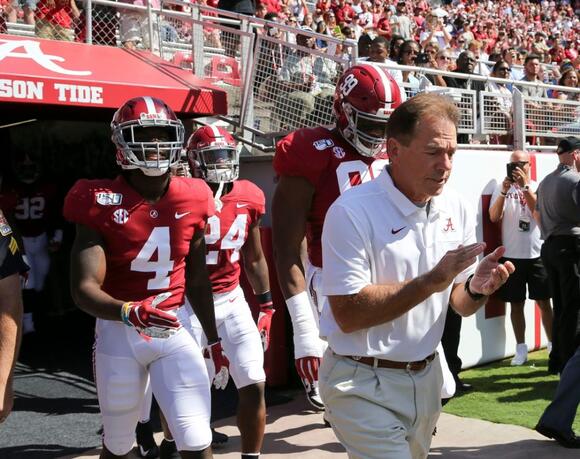 Alabama committed just enough miscues to undermine its performance last weekend against Texas A&M and snuff any aspirations for completing an unblemished season.

Crimson Tide coach Nick Saban addressed those shortcomings in short order following a 41-38 road loss that dropped Alabama (5-1, 2-1 SEC) from first place to fifth in the polls. In preparation for their second consecutive road conference game, this time at Mississippi State (3-2, 2-1) at Davis Wade Stadium, the Crimson Tide are honing in on the specific tasks ahead.

Bulldogs quarterback Will Rogers is the only quarterback in the SEC with 400 passing yards and multiple touchdowns in the same game, a feat he has accomplished twice.

Alabama rolled to a 41-0 home win over Mississippi State last year; but with the loss to A&M fresh in their minds, the Crimson Tide are aware of what is required to slow the Bulldogs. 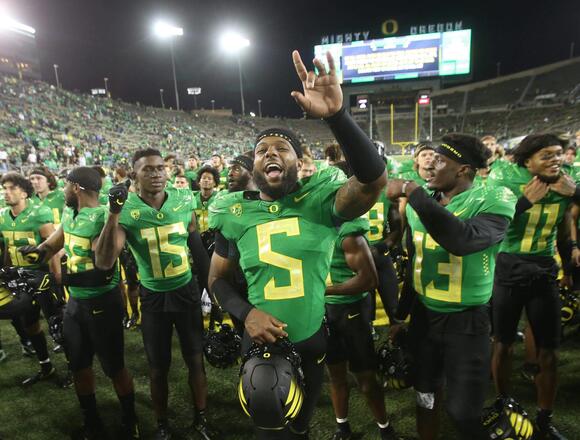 The challenge in facing Alabama is annually the same. The Crimson Tide are juggernauts, and the loss at Texas A&M doesn’t alter that fact. The Aggies did prove that Alabama isn’t infallible, and their effort last week set something resembling a template for crafting an upset victory.

A large part of that challenge is mental. If the Bulldogs play with the vigor they showcased against LSU and Texas A&M over consecutive weeks, opportunities will manifest to push the Crimson Tide to the limit. How the Bulldogs manage the emotional roller coaster will be crucial.

“Your best is always enough,” Bulldogs coach Mike Leach said. “You’ve got to be disciplined enough to do your best, focus in, don’t get discouraged and don’t get too hyped if something good happens for you. It’s the discipline to constantly bring your best effort and not get distracted by the highs and the lows. And I think it takes discipline to do that. That’s the key.”

The Bulldogs do have the benefit of having already done what Alabama could not: defeat the Aggies in College Station. The combination of that result on the heels of a narrow loss against LSU and in advance of an open week set the foundation for an optimistic approach. 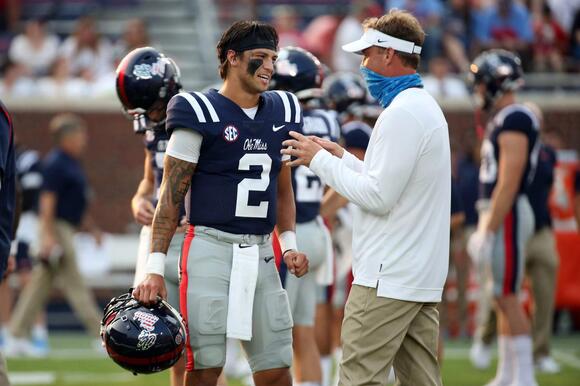 Film study of the Alabama loss might offer an additional incentive. The Crimson Tide so frequently throttle foes that not only are defeats rare, but close games are, too. If the Bulldogs need proof that a shocking result is possible, Leach needs only to remind them of what has already been done.

“One thing with Alabama, watching a team that plays them to the wire — not everybody does,” Leach said. “So that’s beneficial from that tape.

“You’ve just got to try and stay even-keeled. You always fight that with a young group, but I have seen some positive things. I thought we did that through the A&M game, so that was pretty good practice with regard to that in a tough environment where it’s tough to communicate.”

Hall of Fame coach Barry Switzer knows who his top candidate would be if he were in charge of choosing the next Oklahoma head man. Mike Leach is a name both Sooners fans and former coach Lincoln Riley is familiar with, and Switzer believes he’d be the perfect fit. “I...
OKLAHOMA STATE・3 DAYS AGO
On3.com

After putting together a 92-39 record in 12 seasons at Notre Dame, Brian Kelly has left to become the next head coach of the LSU Tigers. Kelly signed a 10-year, $95 million contract with LSU. The news was shocking and has sent waves throughout the college football landscape. According to Paul Finebaum, Brian Kelly bolting Notre Dame for LSU can be attributed to one simple reason: to win a national championship.
NOTRE DAME, IN・3 DAYS AGO
AOL Corp

Oklahoma is searching for a new head coach after Lincoln Riley rocked the college football world by agreeing to a deal with USC on Sunday. The job should attract plenty of strong candidates, and apparently the Sooners are aiming incredibly high. ESPN’s Adam Schefter reports that the Cardinals are targeting...
NFL・5 DAYS AGO
FanSided

Spencer Rattler is leaving the Oklahoma football program by way of the transfer portal. In the catastrophic aftermath of Bedlam, former Oklahoma starting quarterback Spencer Rattler has announced he is transferring from the program after three seasons in Norman. Rattler was a five-star recruit out of Phoenix in the class...
OKLAHOMA STATE・4 DAYS AGO
On3.com

Lincoln Riley shocked the college football world on Sunday, reportedly heading to USC to be their head coach. The Oklahoma Sooners will now be looking for a new head coach. According to Mac Engel of the Fort Worth Star-Telegram, recently hired TCU head coach Sonny Dykes is somebody to keep a “close eye on” for the job. There is mutual interest between the two parties.
OKLAHOMA STATE・5 DAYS AGO
USA TODAY Sports Media Group

In the tidal wave that Brian Kelly leaves at Notre Dame upon him taking the LSU job we’ve heard from the first member of the Fighting Irish coaching staff in regards to the move. Notre Dame special teams coordinator Brian Polian took to Twitter to share the following in the...
NOTRE DAME, IN・3 DAYS AGO

The Notre Dame football team must tread lightly in the coming weeks, as they hope to hand on to some elite players in the next two recruiting classes. On Monday, news came down that Notre Dame football would be losing head coach Brian Kelly to the LSU Tigers. At first, it was just a rumor, then it became a reality, with Kelly telling his team to meet him for a meeting to discuss his departure at 7 AM ET on Tuesday.
NOTRE DAME, IN・3 DAYS AGO
FanBuzz

Who is Lincoln Riley’s Wife?

Lincoln Riley may be young, but he’s already one of college football‘s premier coaches. He proved his pedigree on the field by leading the Oklahoma Sooners to four-straight Big 12 championships and three-straight College Football Playoff semifinal appearances. Despite falling short in the Rose Bowl, Orange Bowl and Peach Bowl...
NFL・4 DAYS AGO
Newsweek

The Heisman race will likely go down to conference championship weekend and which player shines the brightest in that moment.
COLLEGE SPORTS・17 DAYS AGO
On3.com

Paul Finebaum had strong words on Sportscenter for Lincoln Riley following Oklahoma’s loss to Baylor. Things got testy as the clock ran to zero in the contest, and Finebaum eviscerated the Sooners coach for his actions. “Well, first of all, I mean, Dave Aranda had every right to do this...
OKLAHOMA STATE・19 DAYS AGO

LSU alum and ESPN analyst Marcus Spears couldn’t hold back his excitement over the Tigers hiring Notre Dame head coach Brian Kelly. “I like the Brian Kelly hire. Dude can coach and I want LSU football to win consistently,” Spears wrote on Twitter. After sharing his take, the former Tigers...
COLLEGE SPORTS・3 DAYS AGO
The Spun

Lane Kiffin Rumored To Be ‘Top Candidate’ For Notable Job

There’s no reason for Lane Kiffin to leave Ole Miss right now, but if he’s considering going to a different program, he should have options. Yahoo Sports reporter Dan Wentzel recently reached out to infamous Miami Hurricanes booster Nevin Shapiro for his thoughts on the program’s future. With Manny Diaz on the hot seat, all signs point to the Hurricanes making a major move in the offseason.
COLLEGE SPORTS・15 DAYS AGO
AllSooners

On Saturday, college football fans will get the matchup they’ve been waiting for all year. Nick Saban’s Crimson Tide travel to Atlanta for an SEC championship bout against the No. 1 Georgia Bulldogs. Georgia quickly asserted itself as the top team in the nation, thanks to an outstanding defense. But,...
COLLEGE SPORTS・4 DAYS AGO

Kirk Herbstreit fires back at fan over Alabama-Georgia: 'WTF are you talking about'

Kirk Herbstreit has fired back at a fan who did not appreciate his opinion on Tuesday’s College Football Playoff rankings about what happens to Alabama if Georgia beats the Crimson Tide in Atlanta. The debate, which included interjection from Tim Brando, focused on Alabama still getting in the Playoff even...
COLLEGE SPORTS・28 DAYS AGO
Yardbarker

Watch: Lincoln Riley caught in lie about how he left Oklahoma for USC

Nobody can really blame Riley for his decision to ditch the Sooners, but the way he went about it definitely left something to be desired. His manner of handling himself is why this one-word sign went up at Oklahoma after his exit, not the fact that he left. On Tuesday...
OKLAHOMA STATE・2 DAYS AGO
On3.com

With the news breaking that Brian Kelly will leave Notre Dame for LSU, the Fighting Irish are wasting little time in finding his replacement. According to Notre Dame beat writer Pete Sampson, sources around the program believe that there will be some momentum among the decision-makers at the university to elevate Marcus Freeman. And if he were to take over, he would be a first-time head coach, which is a rarity at Notre Dame.
NFL・3 DAYS AGO
Larry Brown Sports

Nick Saban reveals his big problem with his Alabama team

Nick Saban is notoriously tough on his Alabama teams, but he has a very specific complaint about this year’s squad that he’s trying to address. Saban suggested that his Alabama team lacks the hunger of some past squads in light of last year’s national championship win. The Alabama coach attributed that to players being a little bit too satisfied and needing to be motivated in a different way.
ALABAMA STATE・13 DAYS AGO