‘I was completely wrong’: Bob Arum apologises for outburst at Kate Abdo over Fury vs Wilder face-off 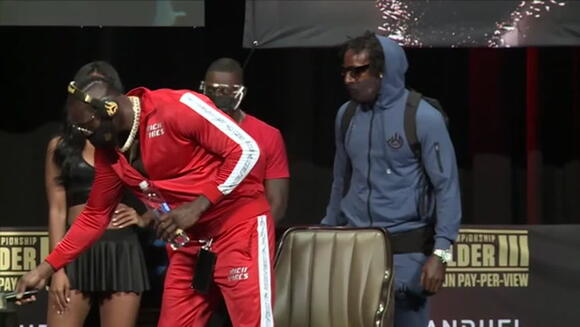 Bob Arum admits he was “completely wrong” for his furious outburst at Kate Abdo for encouraging Tyson Fury and Deontay Wilder to face off at their final press conference.

The veteran promoter’s expletive-ridden rant was also fuelled by his belief that Abdo was bias towards the American heavyweight.

“They bring this woman in from the UK and she’s slanting all the press conference to Wilder,” the 89-year-old said last week. “Like, I don’t give a damn but it’s obvious that that’s what she was doing.

“And then she knew that the understanding was no face-off. [Wilder’s promoter] Tom Brown argued with Fox for no face-off, we said no face-off, and what does she say? ‘Now we’re gonna do a face-off.’ F*** her and f*** them, there was no face-off and we saved the fight.”

Fury dismantled Wilder in the 11th round of their third fight last weekend, retaining his WBC world heavyweight title.

And after reflecting on an instant classic in Las Vegas, Arum has walked back his comments that Abdor described as “entirely inappropriate”. 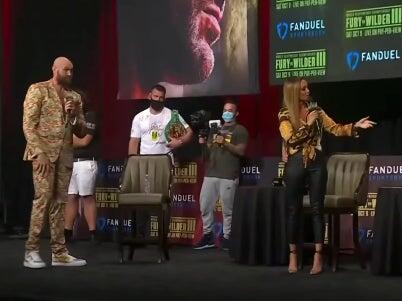 “As far as Kate is concerned, I was completely wrong,” Arum told IFL TV . “We had made a deal with the FOX producer that was televising the event and the deal was made on behalf of Top Rank and PBC.

“And the producer agreed; no stare-down. When she called for a stare-down, particularly after seeing the animosity verbally at that press conference, I exploded but it wasn’t her fault. 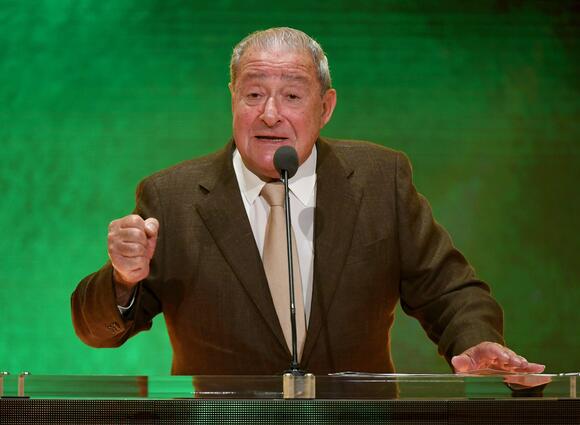 “The producer reneged and she gets the instructions in her earpiece and she was told to order the stare-down.

“She is a terrific commentator, terrific reporter and she wasn’t the one to whom I should have directed my ire, so I was completely wrong.”

Tyson Fury has said that it is ironic that Anthony Joshua believes Deontay Wilder was unable to beat him as he lacks fighting intelligence. Wilder was unsuccessful in his attempt to beat Fury at the third time of asking last month, as the British heavyweight scored a knock out victory in the 11th round.
COMBAT SPORTS・4 DAYS AGO
Boxing Scene

Bob Arum: I Think The Most Lucrative Fight For Terence Crawford Would Be Josh Taylor

LAS VEGAS – All anyone wanted to ask Bob Arum about in the immediate aftermath of Terence Crawford’s 10th-round technical knockout of Shawn Porter was the possibility of Crawford and Errol Spence Jr. finally fighting. This was mere minutes before Crawford all but said he won’t continue his promotional partnership...
COMBAT SPORTS・5 DAYS AGO
punditarena.com

Bob Arum has revealed that Tyson Fury would rather fight Oleksandr Usyk in a world unification heavyweight title bout than defend his WBC belt against Dillian Whyte. The WBC were expected to name Whyte as a mandatory challenger for Fury, but the governing body decided against doing so as they are currently involved in a legal battle with the man who holds their interim world heavyweight title.
COMBAT SPORTS・12 DAYS AGO
Bad Left Hook

Terence Crawford’s win over Shawn Porter on Saturday night was already big news, and then the post-fight press conference saw not only Porter announce his retirement, but Crawford announce that he’s leaving Top Rank with his contract expired after the fight. When asked about his status and the fact that...
COMBAT SPORTS・9 DAYS AGO

Bob Arum finds himself in a very tricky spot following Terence Crawford’s big win over Shawn Porter. He wants to re-sign his client but he also needs to prove what he can do. Terence Crawford made it no secret he was done with Top Rank after this win over Shawn...
COMBAT SPORTS・7 DAYS AGO
Bleacher Report

Terence Crawford remained the WBO welterweight champion Saturday night, defeating Shawn Porter by 10th-round TKO in the most impressive win of his career. After the bout, promoter Bob Arum—technically no longer Crawford's promoter after Crawford's contract with Top Rank expired following Saturday's win—said he could see the champion potentially taking on Errol Spence and Josh Taylor in the future:
COMBAT SPORTS・9 DAYS AGO
Boxing Scene

Tyson Fury on Usyk: I'd Give Him a Good Hiding, Run Him Over Like I Did Wilder

WBC heavyweight champion Tyson Fury believes that he would be too big and too strong for Olympic gold medal winner Oleksandr Usyk. Usyk created shockwaves in the heavyweight division back in September, when he outboxed Anthony Joshua over twelve rounds to capture the WBA, IBF, WBO, IBO world titles at Tottenham Hotspur Stadium.
COMBAT SPORTS・8 DAYS AGO
Boxing Scene

A battle between two former heavyweight champions could be on the horizon. Andy Ruiz Jr. is open to fighting Deontay Wilder, he told The Last Stand with Brian Custer. “Yes, I do, and I think that would be an amazing fight,” said Ruiz in regard to a future fight. “We’re both part of the same team [with Al Haymon’s Premier Boxing Champions], and it’s all business. I wouldn’t mind getting in the ring with him, and I feel I could beat him. We got to get it on.”
COMBAT SPORTS・8 DAYS AGO

Tyson Fury has claimed that he had a few pints just moments before stepping out to take on Deontay Wilder in their first bout. The 'Gyspy King' has been parachuted in to help train his younger brother Tommy ahead of his grudge match against YouTuber Jake Paul in December. As...
COMBAT SPORTS・4 DAYS AGO
fightsports.tv

All eyes are on Terence Crawford. Aside from Crawford’s high-profile WBO welterweight title defense against Shawn Porter Saturday night, all eyes are on the three-division world champion because it could also be his last fight with Top Rank. He said he’ll save the contract talk for later. “My main focus...
COMBAT SPORTS・11 DAYS AGO
Boxing Scene

Arum, Warren To Explore Fury-Whyte For March At Principality Stadium In Cardiff, Wales

LAS VEGAS – Bob Arum understood the WBC’s decision at its annual convention earlier this week to refrain from making Dillian Whyte the mandatory challenger for Tyson Fury’s heavyweight championship due to the active lawsuit Whyte filed against the WBC regarding his mandatory status in June 2020. That decision still...
COMBAT SPORTS・11 DAYS AGO
BoxingNews24.com

By Charles Brun: Promoter Bob Arum says he wants to negotiate a fight between WBC heavyweight champion Tyson Fury and his mandatory challenger Dillian Whyte as a voluntary defense for ‘The Gypsy King.’ Arum wants to negotiate the fight without the WBC ordering. Arum told iFL TV that he wants...
COMBAT SPORTS・11 DAYS AGO

Bob Arum: “Crawford vs Taylor Is The Biggest Fight Out There.”

Josh Taylor could face Terence Crawford, if both are victorious. Undisputed junior welterweight champion Josh “The Tartan Tornado” Taylor (18-0, 13ko) will have a vested interest in cheering for WBO welterweight Terence “Bud” Crawford to defeat two-time champion “Showtime” Shawn Porter. The reason is, he will more than likely face Crawford next.
COMBAT SPORTS・10 DAYS AGO
Las Vegas Herald

How to Watch Tyson Fury vs Wilder live streaming for free on Reddit, Crackstreams & Twitch below. One of the biggest bouts WBC heavyweight champion Tyson Fury (30-0-1; 21 KOs) takes on challenger Deontay Wilder (42-1-1; 41 KOs) in the third installment of their rivalry on Saturday, October 9, 2021 (10/9/21) at the T-Mobile Arena in Las Vegas, Nevada. Lets see below between Boxing streams Tyson Fury vs Wilder live where and how to watch free from any location.
LAS VEGAS, NV・8 DAYS AGO
sjvsun.com

Olympic silver medalist Richard Torrez Jr. has signed with Top Rank Boxing, signaling the start of his professional career. The 22-year-old Tulare native agreed to a multi-year deal with Top Rank, founded by famed promoter Bob Arum, on Nov. 17, just a few months after Torrez Jr. made it to the gold medal bout at the Tokyo Olympics over the summer.
TULARE, CA・6 DAYS AGO
HollywoodLife

Floyd Mayweather Jr. is back with his ex girlfriend Gallienne Nabila, and the couple were spotted enjoying a date night in Los Angeles at a Lakers game. Floyd Mayweather proved his rekindled romance with model girlfriend Gallienne Nabila was going strong when the pair sat courtside at the Houston Rockets and Los Angeles Lakers game on November 2. The boxer, 44, put his unique fashion sense on display in a black sweater featuring a white graphic print, along with ripped black jeans and black leather boots. His on again/off again girlfriend Gallienne, 24, stunned in a black, scoop-neck long sleeved top along with tight leather pants and strappy gold pumps. She accessorized her fit with gold necklaces and rings, as she styled her raven tresses in loose waves.
LOS ANGELES, CA・27 DAYS AGO
SPORTbible

It's official. Martyn 'the scariest man on the planet' Ford will finally face off against Sajad 'Iranian Hulk' Gharibi in a boxing match on April 2, 2022. This one has been a long time in the making but after years of speculation surrounding a possible bout, it was confirmed by both men on social media earlier that a fight will take place at the O2 Arena in London next year.
COMBAT SPORTS・26 DAYS AGO
SPORTbible

Boxing icon Muhammad Ali secretly admitted that he didn’t believe he could beat a prime Mike Tyson in a dream super-fight. That is according to boxing legend George Foreman, who asked his former rival if ‘Iron’ Mike “could beat anybody.”. Ali, who passed away in 2016 at the age of...
COMBAT SPORTS・19 DAYS AGO
boxingnewsandviews.com

Former heavyweight title challenger Kubrat Pulev recorded a big win this weekend in maybe an unexpected way. In what was mostly boxing rules he took on former UFC (the sport of mixed martials arts) champion Frank Mir. The Bulgarian showed class perhaps in the Thanksgiving Holiday spirit to not follow...
UFC・1 DAY AGO
SPORTbible

Ula Siekacz has broken her silence after being badly beaten by TKO in an intergender MMA bout in Poland on Friday night. Siekacz, who is nicknamed 'ArmPowerGirl, took on Piotr 'Mua Boy' Lisowski in one of two intergender fights on the controversial MMA-VIP3 card. The fight ended in the second...
UFC・29 DAYS AGO