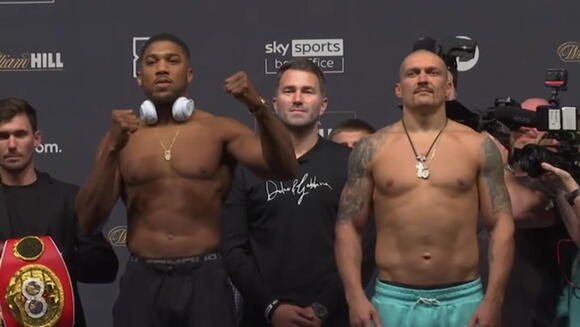 Oleksandr Usyk wants to face Tyson Fury for the undisputed heavyweight title after his rematch against Anthony Joshua .

The Ukrainian claimed the IBF, WBA and WBO belts with a unanimous decision victory over Joshua at the Tottenham Hotspur Stadium last month.

Two weeks later Fury defended his WBC crown with an 11th round knockout of Deontay Wilder in Las Vegas.

Many are now calling for Usyk and Fury to meet for all the belts, but Joshua has already triggered the rematch clause to face the former undisputed cruiserweight champion for a second time.

Usyk’s contractual obligation means he is forced to wait for a Fury fight, but his team insist he wants that challenge providing he comes through against Joshua again.

Speaking to Sky Sports, his promoter Alexander Krassyuk said: “[The Fury fight] will be after Usyk defeats AJ in the rematch.”

Krassyuk also revealed how Usyk reacted to the heavyweight classic between Fury and Wilder, which put an end to their three-fight rivalry.

When asked if Usyk was impressed by Fury-Wilder III, Krassyuk said: “He was. And he was impressed with how the boxers fought without showing boxing skills. They were trying to [badly hurt] each other.”

Usyk and Fury are now the only two at the top of the heavyweight division who are undefeated as professionals.

While the Ukrainian rematches Joshua in the early part of next year, Fury looks set to defend his belt against Dillian Whyte – that is, providing Whyte beats Otto Wallin at the end of October.

Tyson Fury facing Oleksandr Usyk for the undisputed heavyweight crown, got reignited by the news coming out of the WBC Convention. WBC President Mauricio Sulaiman stated that ongoing legal challenges by interim champion Dillian Whyte prevented them from naming the Briton as mandatory. This ruling means Fury can fight anyone...
COMBAT SPORTS・13 DAYS AGO
SPORTbible

Tyson Fury is only interested in TWO fights ahead of his blockbuster return, ruling out Dillian Whyte and Joe Joyce. Fury is set to defend his WBC world heavyweight title in February following his big knockout win over rival Deontay Wilder last October. Whyte and Joyce have been touted as...
COMBAT SPORTS・5 DAYS AGO
punditarena.com

Bob Arum has revealed that Tyson Fury would rather fight Oleksandr Usyk in a world unification heavyweight title bout than defend his WBC belt against Dillian Whyte. The WBC were expected to name Whyte as a mandatory challenger for Fury, but the governing body decided against doing so as they are currently involved in a legal battle with the man who holds their interim world heavyweight title.
COMBAT SPORTS・12 DAYS AGO
punditarena.com

Tyson Fury has said that it is ironic that Anthony Joshua believes Deontay Wilder was unable to beat him as he lacks fighting intelligence. Wilder was unsuccessful in his attempt to beat Fury at the third time of asking last month, as the British heavyweight scored a knock out victory in the 11th round.
COMBAT SPORTS・4 DAYS AGO

Tyson Fury has dismissed the threat posed by unified heavyweight champion Oleksandr Usyk. With Usyk having dethroned Anthony Joshua back in September, the Ukrainian has to be considered one of the best heavyweights on the planet, even if he’s naturally a cruiserweight. Usyk will head into his second bout with...
COMBAT SPORTS・9 DAYS AGO
SkySports

Tyson Fury says his own world heavyweight title ambitions do not "make much sense" as he must instead pick an "available" opponent for his next fight. Fury's US promoter Bob Arum has suggested the British star would ideally like to face Oleksandr Usyk in an undisputed world heavyweight title fight.
COMBAT SPORTS・9 DAYS AGO
Boxing Scene

Former heavyweight champion Frank Bruno is willing to help his countryman, Anthony Joshua, regain the unified crown. Back in September, Joshua lost the IBF, IBO, WBA, WBO heavyweight titles when he was outboxed by Oleksandr Usyk at Tottenham Hotspur Stadium. A rematch is already being worked on, with the second...
COMBAT SPORTS・14 DAYS AGO
The Independent

Charles Martin has set his sights on avenging his 2016 defeat to Anthony Joshua and becoming heavyweight world champion once more.Joshua knocked out the American ‘Prince’ in the second round of their bout at the O2 Arena, in what was the first lost of his career.The 35-year-old Martin has since earned five more victories and one defeat by unanimous decision to Poland’s Adam Kownacki, leaving him with a 28-2-1 record.Martin faces veteran heavyweight Luis Ortiz in Miami in January, and victory could set him on the path for a reunion in the ring with Joshua, who takes on Oleksandr Usyk...
COMBAT SPORTS・6 DAYS AGO

Anthony Joshua’s promoter Eddie Hearn has responded after the two-time heavyweight champion unfollowed him on social media.The 32-year-old recently made the decision to unfollow everyone on Instagram and Twitter apart from his sponsors.But Hearn, who has worked with Joshua since his professional debut back in 2013, has dismissed the idea that they have had any sort of disagreement.When asked about Joshua’s mass unfollowing, Hearn told iFL TV: “Nothing. I think he’s unfollowed everyone but his sponsors, hasn’t he? Don’t worry, we still talk every day.”Joshua is currently ticking over as he awaits news on a potential rematch with Oleksandr...
NFL・1 DAY AGO
SPORTbible

It's official. Martyn 'the scariest man on the planet' Ford will finally face off against Sajad 'Iranian Hulk' Gharibi in a boxing match on April 2, 2022. This one has been a long time in the making but after years of speculation surrounding a possible bout, it was confirmed by both men on social media earlier that a fight will take place at the O2 Arena in London next year.
COMBAT SPORTS・26 DAYS AGO
SPORTbible

Boxing icon Muhammad Ali secretly admitted that he didn’t believe he could beat a prime Mike Tyson in a dream super-fight. That is according to boxing legend George Foreman, who asked his former rival if ‘Iron’ Mike “could beat anybody.”. Ali, who passed away in 2016 at the age of...
COMBAT SPORTS・19 DAYS AGO
MiddleEasy

Before it was even announced that they were going to be fighting, it was clearly that there was some beef between Jake Paul and Tommy Fury. Now it seems that this rivalry may bleed over into each man’s girlfriend too. By fighting Fury, Paul will be taking on an actual...
COMBAT SPORTS・20 DAYS AGO

Floyd Mayweather was one of the greatest boxers of all time, definitely the best of his generation. Now, there’s a new star on the rise in the welterweight division. Step forward the enigmatic Jaron Ennis. Nicknamed “Boots” due to a gym misunderstanding from a moniker his mom gave him of...
COMBAT SPORTS・29 DAYS AGO
MMAmania.com

The proposed boxing match between Mike Tyson and Logan Paul is still in the works, but “Iron Mike” seems ready to unleash all hell on the social media influencer. It’s not a classic clash of combat starts but Tyson and Paul are expected to meet sometime in early 2022 in what would be one of the biggest PPV events of the year. Paul is one of the more popular figures on social media today and Tyson is one of the greatest boxers in the history of the world. A meeting between the two should do upwards of one million PPV buys, which is what Paul pulled in opposite Floyd Mayweather Jr. for their exhibition match earlier this year.
COMBAT SPORTS・10 DAYS AGO
SPORTbible

UFC commentator Joe Rogan has shared his honest take on the potential match-up between boxing legend Mike Tyson and YouTuber Logan Paul. A blockbuster showdown between Tyson and Paul has been mooted following their respective bouts against Roy Jones Jr and Floyd Mayweather. It would be Tyson's second clash since...
COMBAT SPORTS・15 DAYS AGO
ClutchPoints

Ronda Rousey is considered to be the trailblazer for women in mixed martial arts, specifically the UFC. She is also one of the greatest UFC fighters and is the first woman to be inducted into the UFC Hall of Fame. Let’s now take a look at Ronda Rousey’s net worth in 2021.
COMBAT SPORTS・7 DAYS AGO
worldboxingnews.net

This week, Floyd Mayweather hit Mexico for the World Boxing Council Convention and got mobbed by a swarm of fans as he arrived. The five-weight world champion and all-around boxing legend got hit with a wave of love from the Mexico City faithful, known fanatics of the sport. Mayweather, who...
COMBAT SPORTS・14 DAYS AGO
Yardbarker

Mike Tyson has taken to social media to flaunt his extraordinary boxing arsenal amid rumours that he could be set to fight Logan Paul. Tyson made his boxing return against Roy Jones Jr. at the tail end of 2020. The rumour mill has been turning ever since as fight fans speculate over who he could battle next.
COMBAT SPORTS・15 DAYS AGO
dexerto.com

After being linked to a fight against UFC Welterweight Champion Kamaru Usman multiple times, Jake Paul claims the number one pound-for-pound fighter would be “light work” for him. Kamaru Usman called out Jake Paul all the way back in April 2021. Paul accepted the ‘challenge.’ However, Usman decided he didn’t...
UFC・16 DAYS AGO
boxingnewsandviews.com

Former heavyweight title challenger Kubrat Pulev recorded a big win this weekend in maybe an unexpected way. In what was mostly boxing rules he took on former UFC (the sport of mixed martials arts) champion Frank Mir. The Bulgarian showed class perhaps in the Thanksgiving Holiday spirit to not follow...
UFC・1 DAY AGO