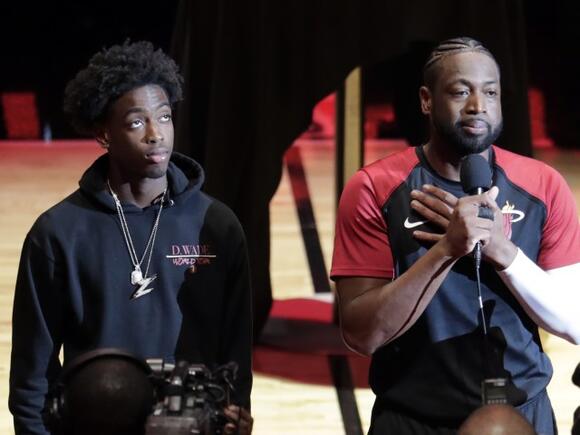 Dwyane posted a video on Instagram Tuesday in which Zaire, 19, says he's signed with the G League.

"I feel good, I feel confident," Zaire says in the video. "I just signed a standard player contract for the NBA G League... Only up from here."

Neither of the Wades said which team he'd be playing for, but Zaire was wearing an official Jazz jacket in the video.

Shams Charania, an NBA insider for Stadium and The Athletic, reported Tuesday that Zaire is expected to join the Stars.

Jazz All-Star Donovan Mitchell appeared pleased with the news, tweeting: "We love to see it."

Eric Walden with The Salt Lake Tribune reports that Zaire was the 296th-ranked prospect in the 2021 recruiting class, but he didn't sign with any college basketball programs despite a handful of offers.

Zaire has also played alongside LeBron James' son Bronny in high school and was seen training with NBA players over the summer, including Jazz guard and NBA Sixth Man of the Year Jordan Clarkson, All-Star Ben Simmons, and others.

The Stars are Utah's affiliate team in the G League, which is the NBA's developmental minor league aimed at transitioning young players into full-fledged pros.

The Stars will begin their G League season on Nov. 5 against the Oklahoma City Blue.

Gabrielle Union and Dwyane Wade posed in front of a Christmas tree with their daughters Kaavia James, 3, and Zaya, 14, for Thanksgiving

On Thursday, Dwyane Wade celebrated Thanksgiving with wife Gabrielle Union, 49, and daughters Zaya, 14, and Kaavia James, 3. The family of four gathered in front of a Christmas tree for a smiling portrait, next to which Union wrote on her Instagram, "Happy Thanksgiving From The Wades," followed by a string of turkey emojis.
BASKETBALL・10 DAYS AGO
Fortune

Subscribe to Fortune Daily to get essential business stories delivered straight to your inbox each morning. After a 16-year career in the NBA, Dwyane Wade is now a proud minority owner of the Utah Jazz after buying a stake in the team in April 2021. The position isn’t just a fun investment for the future Hall of Famer—he sees it as an opportunity to inspire more Black basketball players to join him in the ownership ranks.
NBA・4 DAYS AGO
Insider

In 2020, a video went viral of Dwyane Wade battling his son Zaire in a 1-on-1 game. Wade said it was a teaching moment to show no one will take it easy on Zaire, not even his dad. Zaire now plays in the G League, and Wade said he hopes...
NBA・12 DAYS AGO

At the age of just 26, Giannis Antetokounmpo already has a legendary resume. Giannis has only been in the league for 8 years but has done it all, winning an NBA championship, Finals MVP, 2 regular-season MVPs, and a Defensive Player Of The Year. The fact that he is still yet to enter his prime is absolutely astonishing.
NBA・4 DAYS AGO
arcamax.com

Dwyane Wade is no stranger to doing the unexpected. Think back to the summer of 2012. After not re-signing with Jordan Brand, Wade partnered with a then-little known Chinese apparel brand called Li-Ning. Fast forward nearly a decade later and the Miami Heat legend now has a lifetime deal with Li-Ning while his “Way of Wade” imprint boasts a roster of players including D’Angelo Russell and Udonis Haslem.
NBA・14 DAYS AGO
ClutchPoints

Dwyane Wade won no less than two NBA tiles alongside LeBron James and Chris Bosh during the Miami Heat Big 3 era. It was without a doubt one of the most historic periods in franchise history. As it turns out, however, Wade never really enjoyed those title runs. The Heat...
NBA・12 DAYS AGO
vidanewspaper.com

Candace Parker Reveals Kevin Durant And Dwyane Wade Gave Her Advice Over Joining The Chicago Sky: "It's Going To Be A News Story For 2 Days, Whether You Go Anywhere Else Or Stay In LA. And Then People Are Gonna Move On."

The decision to leave a team can be very difficult for a basketball player. There have to be a lot of factors that get taken into consideration, and a player genuinely has to believe that they have no choice but to leave, as their career and success depend greatly on it.
NBA・6 HOURS AGO
Heat Nation

Miami Heat legend Dwyane Wade was recently asked if he thinks the organization should retire Udonis Haslem’s jersey number, and he offered a very telling response. Wade needed just two words to answer the question. “They will,” Wade said to TMZ regarding whether or not the Heat should retire Haslem’s...
NBA・10 DAYS AGO
Yardbarker

Dwyane Wade To Donovan Mitchell: "Make Sure You Carry Yourself As A Champion So That When You Become One, When You Get That Opportunity, It's Not Foreign To You."

Dwyane Wade had a successful career winning three championships with the Miami Heat before hanging his boot. But before he stepped off the court, he made connections with players, bonds that cannot be easily broken. Everyone knows how close Wade and LeBron James are following their championship runs. But he...
NBA・6 DAYS AGO
Heat Nation

It was revealed last month that Staples Center, the longtime home of the Los Angeles Lakers and Los Angeles Clippers, will be known as Crypto.com Arena starting in late December. The venue will also undergo a major renovation. Miami Heat legend Dwyane Wade, who played his fair share of games...
NBA・5 DAYS AGO

LeBron James isn’t the only basketball player in his family. His son Bronny is on a very exciting basketball trajectory himself, and he recently got the chance to play a game at Staples Center. In the game, the younger James put together a fantastic showing for his school, as he...
NBA・22 HOURS AGO
Heat Nation

Dwyane Wade is an NBA legend, but he’s not the only basketball player in his family. His son Zaire has NBA dreams of his own, and he’s currently playing in the G League. The youngster recently threw down a dunk in a game, and it was a flashy one. The...
NBA・2 HOURS AGO
Heat Nation

Tyler Herro continued to add to his young legacy with the Miami Heat on Saturday night, crossing 2,000 career points playing against the Milwaukee Bucks. Herro has played in 129 games with the Heat since being drafted out of the University of Kentucky in 2019. Only Dwyane Wade reached the milestone faster. Michael Beasley is the only player younger than Herro to reach 2,000 points.
NBA・2 DAYS AGO
FanBuzz

Kids of NBA legends are proving they’re more than a last name. Bronny James is lighting it up at Sierra Canyon. Zaire Wade is headed to the NBA G-League. Shaquille O’Neal’s kids are dunking throughout college basketball. As for Detroit Pistons and Chicago Bulls great Dennis Rodman, we got an...
NBA・17 DAYS AGO
ClutchPoints

Boston Celtics big man Enes Kanter recently made headlines after he went on an all-out attack on Los Angeles Lakers superstar LeBron James and his alleged ties to China. Unsurprisingly, Kanter has United States Senator Ted Cruz backing him in his corner as the outspoken Republican also went on an unfiltered tirade against LeBron.
NBA・15 DAYS AGO
ClutchPoints

Three-time NBA champion Andre Iguodala has been in the league since 2004. He has seen his role go from the top rookie, the best player on the team, the most important sixth man, and a savvy veteran. Throughout all that, Iggy had his partner by his side. Now, let’s focus on Andre Iguodala’s wife Christina Gutierrez.
NBA・18 DAYS AGO
fadeawayworld.net

Andre Iguodala On Ben Simmons: "The More Money You Make, The More They Take Away From Us Being Humans."

Ben Simmons and the 76ers have been in a highly publicized stand-off for quite some time now. After the 76ers were beaten by the Hawks in the playoffs, there were lots of rumors about a potential Ben Simmons trade. However, since other teams offered subpar offers for Ben Simmons, the 76ers have thus far elected to hold on to the star point guard.
NBA・17 DAYS AGO
FOX Sports

Steph Curry dominated in the Golden State Warriors' win over the Brooklyn Nets last night with a game-high 37 points and nine three-pointers. His former teammate, Kevin Durant, had 19 points, but did not score a field goal in the third quarter. Golden State has the best record in the NBA. A columnist wrote that Curry and the Warriors are winning the breakup with KD. Marcellus Wiley explains why KD is winning the breakup over Steph.
NBA・19 DAYS AGO