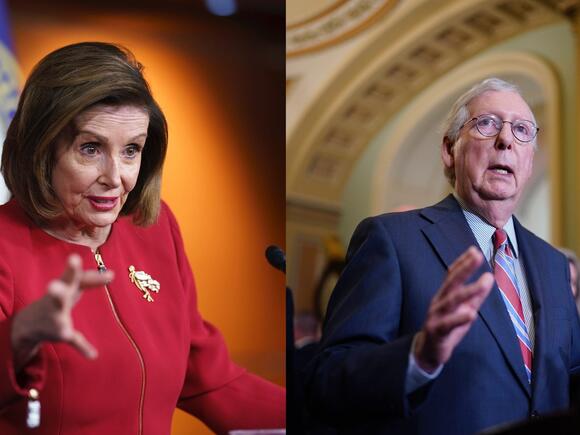 The House on Tuesday approved a two-month debt-limit patch that would run through early December, sending the bill to President Joe Biden's desk for his signature. It amounts to a momentary reprieve as Senate Republicans are pledging to block any further renewal of America's ability to repay its bills.

Tuesday's vote was 219-206, with every House Republican who voted opposing the measure. Democrats relied on a procedural maneuver packaging the bill - which cleared the Senate last week - with votes on other measures.

The bill, once signed, staves off a catastrophic federal default that the Treasury Department projected would occur in six days. House Speaker Nancy Pelosi slammed Senate Minority Leader Mitch McConnell in a speech before the vote, saying he "was playing Russian Roulette with the economy."

"This is our debt. This is America's debt," House Majority Leader Steny Hoyer said in a floor speech.

Another showdown looms in December, however, with McConnell vowing to block any effort to further raise the debt limit. His opposition is designed to force Democrats to enact any additional increase on their own using a party-line mechanism called reconciliation.

"I will not be a party to any future effort to mitigate the consequences of Democratic mismanagement," the Kentucky Republican wrote in a scathing letter to Biden on Friday. "Your lieutenants on Capitol Hill now have the time they claimed they lacked to address the debt ceiling."

McConnell argued Democrats must employ the arduous reconciliation procedure to approve a debt-limit hike unilaterally, the same demand he's made since July. The process allows some measures to be passed with only a simple majority, shielding it from the filibuster's 60-vote threshold in the Senate.

Republican lawmakers plan to shut down US government on Friday, report says

Conservative Republicans are reportedly planning to force a government shutdown to protest President Joe Biden’s push to mandate COVID-19 vaccinations for workers in large companies. Far-right wing GOP senators say they will object to considering any bipartisan stopgap funding measure to delay its passage until after a deadline to keep...
CONGRESS & COURTS・21 HOURS AGO
Fox News

House Speaker Nancy Pelosi appeared to say House Democrats won't vote for a continuing resolution that includes a provision blocking any funding to enforce federal COVID-19 vaccine mandates, as Congress inches closer to a government shutdown just before midnight Friday night,. "We're not going to go for their anti-vaxxing. So...
CONGRESS & COURTS・5 HOURS AGO
Business Insider

A group of GOP senators are said to be considering hardball tactics to derail Biden's vaccine mandate. They plan to block a government funding bill to strip the mandate of funding, Politico reported. Congress has until midnight on Friday to pass a new funding bill. A group of Republican lawmakers...
PRESIDENTIAL ELECTION・1 DAY AGO
Reuters

WASHINGTON, Nov 30 (Reuters) - A new fault line opened between Republicans in the U.S. House of Representatives on Tuesday, as lawmakers squabbled publicly over accusations of religious bigotry and racism among party conservatives. In a fight that could further complicate Republican efforts to forge unity ahead of next year's...
CONGRESS & COURTS・1 DAY AGO

Will President Joe Biden's $2 trillion social-spending and climate package actually get the Senate's OK this month, as that chamber's leader has promised? Two analysts from opposite ends of the political spectrum say that looks likely.
PRESIDENTIAL ELECTION・5 HOURS AGO
MarketWatch

Top House and Senate lawmakers announced agreements to head off a government shutdown this weekend, but demands by a small group of Republicans may delay quick action with a Friday deadline looming.
WASHINGTON, DC・2 HOURS AGO
WTAJ

WASHINGTON (AP) — The federal government could be heading for temporary shutdown, with Republicans poised to stall a must-pass funding bill in their effort to force a debate in Congress on rolling back the Biden administration’s COVID-19 vaccine mandates for some workers. Conservative Republicans in the House and Senate who are opposed to Biden’s vaccine rules want […]
PRESIDENTIAL ELECTION・23 HOURS AGO

Democratic leaders in Congress are working around the clock to meet a new end-of-week deadline to avoid a government shutdown amid separate looming deadlines to avoid a disastrous national default, pass a defense bill and enact President Biden’s sprawling budget proposal. The White House is trying to convince Congress and...
CONGRESS & COURTS・1 DAY AGO
Business Insider

A rift has opened between McConnell and some Republican senators who have pushed vaccine misinformation and opposed mandates.
PRESIDENTIAL ELECTION・9 HOURS AGO
Markets Insider

Democrats want to raise the debt ceiling, avoid a government shutdown, and pass Biden's agenda all before Christmas. The GOP has other plans.
CONGRESS & COURTS・2 DAYS AGO
Washington Times

WASHINGTON — Democratic Sen. Joe Manchin of West Virginia on Monday suggested there was a path forward to vote on the debt ceiling and avoid what would be the nation's first ever default. "I understand there was an agreement from the Republicans to do a very quick reconciliation by itself...
CONGRESS & COURTS・2 DAYS AGO
USA TODAY

Government shutdown showdown: House expected to vote on bill to keep government open but GOP senators not backing down

Fifteen Republican senators want language in the bill preventing the use of federal money to implement a workplace vaccination and testing mandate.
PRESIDENTIAL ELECTION・6 HOURS AGO
thecentersquare.com

(The Center Square) – Lawmakers face a tight deadline this week to pass a spending measure or face a government shutdown Friday at midnight. Republicans and Democrats are engaged in negotiations over a spending measure to fund the government, either to buy a few weeks for more negotiations or to fund spending longer into next year. Leadership in both parties has said publicly they do not expect a shutdown this weekend, but other members in their ranks are not so sure.
CONGRESS & COURTS・1 DAY AGO
POLITICO

A Republican push on vaccine mandates and a debate over how long a spending patch should last has delayed a House vote to keep the government funded.
WASHINGTON, DC・1 DAY AGO
Fox News

The House Freedom Caucus sent a letter Wednesday to Senate Minority Leader Mitch McConnell, R-Ky., urging him to use "all procedural tools" at his disposal to delay a stopgap measure to extend government funding into January unless Democrats agree to prohibit funding for President Biden’s COVID-19 vaccine mandate. Lawmakers are...
CONGRESS & COURTS・1 DAY AGO
TIME

This article is part of the The DC Brief, TIME’s politics newsletter. Sign up here to get stories like this sent to your inbox every weekday. Welcome to Washington, currently home to an octogenarian staring contest that will determine whether the military will stand ready, inspectors will check the food heading to holiday tables and families shuffle through busy airports with TSA screeners working with pay—or not.
CONGRESS & COURTS・1 DAY AGO
AFP

US lawmakers scrambled Thursday to avert a weekend government shutdown as Republicans stalled a bill to fund federal agencies in a bid to derail President Joe Biden's Covid-19 vaccine mandate. But hardline Senate Republicans have threatened to hold up the legislation over their opposition to Biden's unrelated order that large companies mandate Covid-19 vaccinations or regular testing for workers.
CONGRESS & COURTS・2 HOURS AGO