By Nathaniel Weixel
The Hill
3 days ago 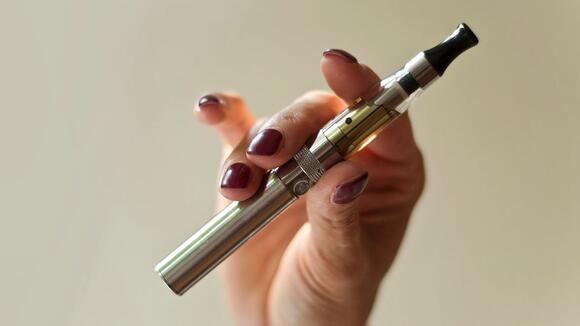 The first-of-its-kind authorization comes amid an effort by the FDA to regulate the massive vaping industry and determine which products are allowed to stay on the market.

It signals the agency may look more favorably on tobacco-flavored products than the fruity ones that are most popular among teenagers, even though some feature extremely high nicotine content.

Rep. Raja Krishnamoorthi (D-Ill.), a frequent critic of the vaping industry and the FDA's efforts at regulation, said the agency failed in its public health responsibility.

"FDA has turned its back on public health by approving a high-nicotine e-cigarette. Many countries around the world have capped the amount of nicotine allowed in e-cigarettes, which allowed them to avoid a youth vaping epidemic," Krishnamoorthi said in a statement.

The Campaign for Tobacco Free Kids, Vuse Solo has three times the nicotine concentration as legally permitted in Canada, the UK and Europe.

Electronic cigarettes were first introduced on the market as a "healthier" alternative to smoking traditional tobacco cigarettes, but it began to spread to young people, who were drawn in by sweet and fruit-flavored e-cigarette pods easily accessible in stores. Since 2014, e-cigarettes have been the most commonly used tobacco product among U.S. youth.

Last year, the Trump administration banned popular cartridge-based fruit and mint flavors but not tobacco and menthol. Manufacturers were allowed to submit those products for the agency’s permission to resume their sales.

The agency missed a court-ordered deadline last month to decide which e-cigarette products can stay on the market.

In the run-up to the deadline, FDA said it made decisions on more than 90 percent of the new tobacco products that were submitted, rejecting applications of more than 300 companies to sell more than 6 million products, mainly due to their potential appeal to underage teens.

But regulators delayed making decisions on most of the major vaping companies, including Vuse and market leader Juul.

According to the FDA, the evidence submitted by RJ Reynolds showed established cigarette users preferred tobacco, compared to non-tobacco flavors like mint, nectar, and tropical.

But the agency said young people are less likely to start using tobacco-flavored e-cigarettes and then switch to higher-risk products, such as combusted cigarettes.

FDA also imposed strict marketing restrictions on the company to greatly reduce the potential for youth exposure to tobacco advertising.

The agency said it rejected 10 additional requests from RJR for flavored products submitted under the Vuse Solo brand, but was not publicly disclosing the specific flavors due to confidentiality issues.

FDA is still reviewing the company's application for a menthol-flavored product.

“We must remain vigilant with this authorization and we will monitor the marketing of the products, including whether the company fails to comply with any regulatory requirements or if credible evidence emerges of significant use by individuals who did not previously use a tobacco product, including youth," Mitch Zeller, director of the FDA’s Center for Tobacco Products, said in a statement.

Over the past 25 years, the U.S. has seen a major overhaul in the way we think about and regulate marijuana use. In 1996, California became the first state to approve medical marijuana and in 2012, Colorado and Washington became the first to legalize it for recreational use. Since then, we've seen a cascade of new legislatures surrounding cannabis: today, 18 U.S. states plus Washington, D.C. have legalized marijuana for adults over the age of 21, and 37 states have legalized medical marijuana for those with approved medical conditions.
PHARMACEUTICALS・28 DAYS AGO
eturbonews.com

CDC issued an urgent message for any American vaccinated with Pfizer

The U.S. Food and Drug Administration reiterated its stance that the benefits of Moderna’s COVID-19 vaccine outweigh its risks on Friday after several Nordic countries began restricting its use for certain age groups due to concerns about a rare heart-related side effect. The FDA responded after health officials in Finland...
PHARMACEUTICALS・7 DAYS AGO
Slate

Will a New Study on Menthol Cigarettes’ Harm to Black Americans Finally Push the FDA to Act?

Tobacco researchers have known for decades that mentholated cigarettes do outsized harm to Black Americans. And now, a recent study from University of Michigan public health researchers David Mendez and Thuy Le bolsters that understanding. According to the study, there were 157,000 smoking-related premature deaths among Black Americans, and 1.5...
SOCIETY・1 DAY AGO

The FDA just authorized a vape and I'm confused

In a bizarre plot twist — given the overwhelming evidence that vapes are terrible — the Food and Drug Administration (FDA) just authorized three e-cigarette products made by R.J. Reynolds. The FDA’s authorization is based on the belief that the benefits of these products (to help adults quit smoking real cigarettes) outweigh the possible risk to teens. These vapes, from a company called Vuse, come in tobacco flavors, which are supposedly less appealing to children and non-smokers, CNN reported.
HEALTH・2 DAYS AGO
The Conversation U.S.

E-cigarettes get FDA approval: 5 essential reads on the harms and benefits of vaping

After being on the U.S. market for around 15 years, an e-cigarette has, for the first time, been authorized for sale by the Food and Drug Administration. The government agency announced on Oct. 12, 2021, that three products from the vaping company Vuse had been given the green light to be marketed, along with one device in which the approved cartridges are placed. Although limited in scope – the authorization only relates to tobacco-flavored e-cigarettes and not the wider range of flavors that critics say are aimed at younger consumers – the move by the FDA is seen as a major development...
HEALTH・2 DAYS AGO
WashingtonExaminer

The Food and Drug Administration's vaccine expert panel endorsed a half-dose booster shot for Moderna vaccine recipients who are 65 and older, adults considered to be at high risk of severe COVID-19 infections, or those working or living in situations that put them at greater risk of contracting the virus.
PUBLIC HEALTH・1 DAY AGO
Pittsburgh Post-Gazette

FDA leans toward authorizing Moderna booster at a half dose

The U.S. Food and Drug Administration is leaning toward authorizing half-dose booster shots of the Moderna Inc. coronavirus vaccine, satisfied that it’s effective in shoring up protection, people familiar with the matter said. The authorization would set the stage to further widen the U.S. booster campaign after earlier authorization of...
HEALTH・16 DAYS AGO

U.S. FDA staff says Moderna did not meet all criteria for COVID-19 boosters

Oct 12 (Reuters) - Scientists at the U.S. Food and Drug Administration said on Tuesday that Moderna Inc (MRNA.O) had not met all of the agency's criteria to support use of booster doses of its COVID-19 vaccine, possibly because the efficacy of the shot's first two doses has remained strong.
PUBLIC HEALTH・3 DAYS AGO
The Associated Press

WASHINGTON (AP) — Drugmaker Merck asked U.S. regulators Monday to authorize its pill for treating COVID-19 in what would add an entirely new and easy-to-use weapon to the world’s arsenal against the pandemic. If cleared by the Food and Drug Administration — a decision that could come in a matter...
PUBLIC HEALTH・5 DAYS AGO
Newsweek

Moderna said that study subjects who received half the dose of a regular shot saw a jump in virus-fighting antibodies.
PUBLIC HEALTH・4 DAYS AGO
News 12

The Vuse products manufactured by RJ Reynolds are the first e-cigarettes authorized for sale by the FDA.
HEALTH・2 DAYS AGO

(CNN) - The U.S. Food and Drug Administration is announcing two new rules for reviewing requests to sell and market new tobaccos products. The rules will be published Tuesday in the Federal Registry and take effect in a month. One rule applies mainly to electronic nicotine delivery systems, including e-cigarettes.
U.S. POLITICS・11 DAYS AGO
GMA

Food industry should cut back on use of salt, FDA says

Will the FDA Approve the Moderna COVID-19 Booster This Week?

Some senior citizens and other members of high-risk populations in the U.S. have already received a third COVID-19 shot. However, the FDA only approved the Pfizer booster shot, specifically for those who already received the Pfizer series. Is Moderna next in line?. Article continues below advertisement. With the FDA and...
PUBLIC HEALTH・5 DAYS AGO
Reuters

Oct 15 (Reuters) - Outside advisers to the U.S. Food and Drug Administration on Friday unanimously recommended the agency authorize a second shot of Johnson & Johnson's (JNJ.N) COVID-19 vaccine for all recipients of the one-dose inoculation. The agency is also considering lowering the recommended age for booster shots of...
PUBLIC HEALTH・18 HOURS AGO
Medscape News

Editor's note: Find the latest COVID-19 news and guidance in Medscape's Coronavirus Resource Center. A US Food and Drug Administration (FDA) advisory committee on Friday voted 19-0 to authorize second doses of the Johnson & Johnson COVID-19 vaccine in an effort to boost immunity. It was the second vote in as many days to back a change to a COVID vaccine timeline.
PHARMACEUTICALS・1 DAY AGO
The New York Times

FDA Panel Recommends a Moderna Booster for Many Americans

A man receives a dose of the Johnson & Johnson coronavirus vaccine in Philadelphia on May 10, 2021. (Rachel Wisniewski/The New York Times) A key advisory committee to the Food and Drug Administration voted unanimously Thursday to recommend a booster shot of the Moderna coronavirus vaccine for many of the vaccine’s recipients, at least six months after a second dose.
PHARMACEUTICALS・1 DAY AGO
TheStreet

The U.S. Food and Drug Administration (FDA) announced Monday that it had issued an emergency use authorization for the ACON Laboratories Flowflex COVID-19 Home Test. The over-the-counter (OTC) COVID-19 antigen test will be added to the growing list of tests that can be used at home without a prescription. The...
PUBLIC HEALTH・11 DAYS AGO