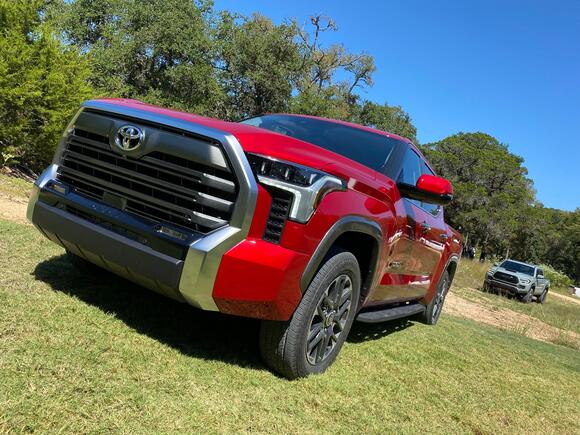 The 2022 Toyota Tundra will bank on an all-new chassis, hybrid powertrain and an impressive new infotainment system and virtual assistant as it tries to shake up the Detroit-dominated market for full-size pickups.

The 2022 Tundra is new from the ground up, a long-awaited replacement for Toyota’s first full-size pickup, which debuted as a 2007 model in 2006 — more than two generations ago for the Chevrolet, Ford and Ram pickups it competes with.

The Tundra was engineered and designed in the U.S. Its new infotainment system, which includes cloud-based navigation and an effective virtual assistant was also developed here. Toyota will build the Tundra in San Antonio.

The Tundra acquitted itself well during a day testing in the Texas hill country, but staked no claim to leadership, at least in part because the automaker won’t reveal pricing ‘til closer to when sales begin in December. The more powerful, top of the line hybrid isn’t due in dealerships til next spring.

Prices are to be announced.

The Tundra comes in two four-door cabs: the Double Cab, which has a small rear seat, and the Crewmax, a conventional-size crew cab with a roomy rear seat. Both hold five people.

All configurations are available with rear- or four-wheel drive. A low-range transfer case is available for off-roading.

A 10-speed automatic transmission is standard.

Both drivetrains start with a 3.5L two-turbo V6. Strictly speaking, it’s a 3.4L and we round down. The gasoline-only model is called i-Force. It produces 348 horsepower and 405 pound-feet of torque in the base SR model. In other models, the same engine will produce 389 hp and 479 pound-feet of torque.

The late-arriving i-Force Max adds a hybrid system to the base powertrain. It develops 437 hp and 583 pound-feet of torque.

Toyota’s preliminary figures estimate non-hybrid fuel economy of  18 mpg in the city, 23 on the highway and 20 combined. The estimate for 4WD models is 17/22/19.

Toyota did not have estimates for hybrid fuel economy at the time of writing.

Toyota will have 115 accessories available from the start of sales in December.

I drove turbo and hybrid Tundras on a variety of surface roads and highways and an off-road trail. I also towed trailers weighing up to the pickup’s full rated 12,000 pounds.

The two V6 twin-turbos are smooth and powerful. Even the base generates more horsepower and torque than Toyota’s unlamented 5.7L V8, which we can hope not to see again.

The Tundra was capable on off-road tracks that included a short scramble up a roughly 40-degree slope of volley- to beach-ball-size rocks and over a few roughly utility pole-size logs. An automated crawl control modulated brakes and throttle for smooth progress at a set speed, leaving the driver free to focus on steering between rocks and trees.

The independent rear suspension proved particularly useful towing a nearly 12,000-pound, 26-foot Airstream Land Yacht. The twin-turbo had no difficulty pulling into traffic or negotiating a slight grade to a reservoir. Toyota expects the hybrid’s towing capacity to be in the “low 11,000s.”

The 2022 Toyota Tundra offers plenty of safety and driver assistance features, many of them standard:

The interior is accommodating, with a wide console that offers plenty of storage. Most of the surfaces are padded. An 8-inch touch screen is standard, but most Tundras will get an exuberant 14-inch is optional on the SR5 and standard on higher trims. The bigger screen responds to common motions including pinch, zoom and swipe.

Toyota’s new infotainment system seems to the be Tundra’s big advance. The system, which will roll out over every new Toyota and Lexus and evolve to add more features, is cloud-based and includes a virtual assistant that handled every driving related question I threw at it.

Linking it to data in the cloud means a request for nearby food will bring information like hours of operation, menu and ratings, not just a list of addresses and joints called Mom’s. The system will store destination, directions and adjacent information in case you lose the connection to the cloud.

The Tundra also has a system for hands-free backing up with a trailer. The truck and trailer must be straight and aimed exactly at the desired boat ramp or barn. If the driver can handle that, the truck will stay on the straight and narrow.

It’s impossible to make a meaningful judgement of a vehicle without its price and final EPA fuel economy rating, but the 2022 Toyota Tundra makes a good first impression. It’s quiet, smooth, comfortable and met the promises Toyota made.

With the possible exception of the infotainment system, though, the Tundra doesn’t set new standards for full-size pickups. Its expected fuel economy and towing capacity are respectable, but not class-leading.

Competitive pricing will be vital.

2022 Toyota Tundra at a glance

Prices to be announced

The 2022 Toyota RAV4 adds sleek new headlights on all trims except the base LE and LED fog lamps on the higher grades. There is a new SE Hybrid trim that will slot below the XSE on the sportier side of the RAV4 Hybrid’s lineup. The 2022 RAV4 goes on...
CARS・14 DAYS AGO
MotorBiscuit

The Three Fastest Trucks Motortrend Has Ever Tested: a Toyota Tundra, a Supercharged 4×4, and a Surprising EV

MotorTrend has been reviewing vehicles since 1949. This publication conducts a controlled 0-60 MPH acceleration test on every vehicle. Over the years, it has compiled a massive list of the 0-60 times of various pickups. The three fastest trucks MotorTrend has ever tested could not be more different. One is a dealer-upgraded Toyota Tundra, another is the off-road racing RAM 1500 TRX, and the third is the first electric pickup to market, the Rivian R1T.
CARS・12 DAYS AGO
MotorBiscuit

The high price of Toyota’s 2022 Tundra may shock you. At $37,645, the base-model truck is over $3,000 more expensive than it was last year. The new Toyota Tundra price is thousands more than pickups from Chevrolet, Ram, and Ford. So why is the 2022 Tundra so expensive?. Why are...
BUYING CARS・13 DAYS AGO
Top Speed

Midsize sedan sales continue to decline as a whole, but Toyota remains committed to this segment. As a matter of fact, the Camry still managess to outsell every single other crossover and SUV apart from Toyota’s own RAV4 and the Honda CR-V. In a bid to keep the Camry interesting, Toyota is upgrading their popular midsize sedan for the 2022 model year.
CARS・11 DAYS AGO

A bright position in a slumping automotive market category of minivans appears to be that of the Toyota Sienna and its maker’s decision a year ago to produce and sell only gas/electric hybrid models. Contrasting that is FCA’s axing a bit earlier of the Dodge Grand Caravan, the greatest-selling minivan...
CARS・14 DAYS AGO
texashillcountry.com

We planned our annual fall visit to Galveston months before taking our September 13 road trip, so being greeted by a hurricane wasn’t part of our original plan. When we learned Tropical Storm Nicholas might churn into a Cat. 1 hurricane, my husband and I still decided to leave for the Gulf Coast that Monday. After all, friends who live on the island claim they only leave for a Cat. 2 or higher.
GALVESTON, TX・12 DAYS AGO
pinalcentral.com

The small Toyota RAV hybrid has been a popular seller. The new Venza hybrid SUV is based on the same platform and drive train. The difference is the latter looks larger on the outside, has fancier styling and costs a bit more. Curiously, there is less cargo room claimed on the inside, 26 cubic feet vs. 30. In the real world, we found the passenger seating to be roomier regardless.
BUYING CARS・11 DAYS AGO
automotive-fleet.com

Toyota's popular crossover SUV, the RAV4, will come with a new SE Hybrid grade for 2022, as well as multiple exterior and interior upgrades across all grades, the OEM announced on Nov. 12. As the brand celebrates 25 years, the newest iteration of the RAV4 gets a new color —...
HOME & GARDEN・12 DAYS AGO

The all-new 2022 Toyota Tundra pickup is set to hit dealerships in the next week or two. You would think that in anticipation of its release Toyota queued up a lot of them to satisfy demand. But now there is word that the waiting list for Tundra pickups is four months to over a year. Yep, a year in some parts of the country.
EL MONTE, CA・2 DAYS AGO
MotorBiscuit

Does the New 2022 Toyota Tundra Come With a Diesel Engine?

In fall 2021, Toyota finally unveiled the third generation of its full-size Tundra pickup truck. Motorheads wonder if the new 2022 Toyota Tundra will come with a diesel engine. Sadly, the newest Tundra will not offer a diesel option. Shockingly, the new 2022 Tundra will not even offer a V8 Toyota engine. That said, the cutting-edge powertrain in the 2022 Toyota Tundra features a “diesel-like” torque curve. Find out how.
CARS・1 DAY AGO
MotorBiscuit

The Ford Maverick is a small truck. It slots well below the F-150 in the Blue Oval truck family, and though we've seen a few side-by-side comparisons before, this one in particular really shows the size difference. The Maverick is so small next to the F-150 it's almost cute. But cute doesn't win drag races. Power does.
CARS・21 HOURS AGO

Bring out your dead: Automakers discontinued these cars for 2022

With low inventories, car shortages, and steep new car prices, it would seem automakers would think thrice before discontinuing any cars for 2022. But the grim reaper’s fickle sickle—the profit motive—comes for all cars, at some time or another. Compact sedans continue to shrink in the growing shadow of crossover...
CARS・29 DAYS AGO
MotorBiscuit

Toyota is targeting Hispanic consumers for its all-new Tundra pickup with an effort that included a donation of fresh produce baskets in Dallas. The campaign, from Conill, aimed to appeal to Hispanics’ strong sense of community and purpose in life. For Hispanic truck buyers, this sense of purpose is relatable to performance, according to the agency.
DALLAS, TX・12 DAYS AGO
roguevalleymagazine.com

Drive the 2021 Tundra from Lithia Toyota of Medford!

Trucks are all about utility, and the 2021 Toyota Tundra is a perfect combination of comfort and utility — a true workhorse that powers through the week and goes out to play on the weekend. The Tundra from Lithia Toyota of Medford is a full-size pickup with lots of comfort,...
MEDFORD, OR・2 DAYS AGO