'There's obviously been some bust-up with Pep': Roy Keane believes 'something is going on' between Raheem Sterling and his Manchester City manager Guardiola, with the England star struggling for minutes this year

Roy Keane believes there has been a bust-up between Raheem Sterling and his manager Pep Guardiola at Manchester City.

England star Sterling, off the back of an impressive Euro 2020 with his country, has started just two of City's seven Premier League games so far this season.

Despite his lack of starts, Gareth Southgate named the 26-year-old in his starting XI for Tuesday's World Cup qualifier against Hungary and Keane says while the England boss still trusts Sterling, something is untoward in Manchester. 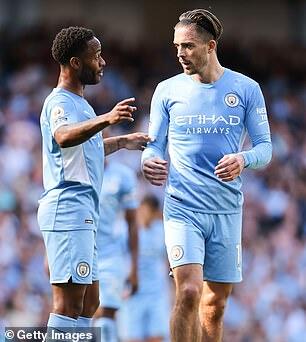 'He’s (Southgate) is a big fan of Raheem, no matter his problems with his club,' the ex-Manchester United captain told ITV.

'He’s got huge confidence in Raheem, he’s never going to let him down, he was always going to start tonight...

'There’s obviously some bust-up with Pep, there's something going on there, they’ve brought Grealish in (for £100m in the summer).

'You say 20 months left on his contract but 20 months is a long way away - he just needs to focus on his game.'

Ian Wright also believes that Sterling has a right to find out about his long-term future, with his deal at the Etihad expiring in June 2023.

'There’s no secret that there’s something going on with him and his manager,' the ex-Arsenal striker said.

'He didn’t play too often at the end of last season and he played well at the Euros. It’s his right to find out his future at that club, tonight is his opportunity to stake a claim.'

Divock Origi added another famous goal to his Liverpool portfolio, while Callum Wilson gave Newcastle their first league victory of the season
PREMIER LEAGUE・1 DAY AGO
The Guardian

There was an era when managerial changes in Manchester were confined to the blue half, but on the day Pep Guardiola saw off Ole Gunnar Solskjær, he also claimed the scalp of a rather more decorated coach. Rafael Benítez is the Champions League winner who has now gone six games without a victory. Instead, the Spaniard with the most to celebrate was Rodri, who delivered a stunning strike, and the Liverpool alumnus with much to savour was Raheem Sterling, who was lured to Anfield by the current Everton manager.
PREMIER LEAGUE・14 DAYS AGO
Daily Mail

Robbie Keane and Jamie Redknapp have praised Joao Cancelo for providing Raheem Sterling with an 'unbelievable' pass for Manchester City's first goal against Everton. Cancelo registered his sixth assist of the season after sensationally finding Sterling from 25-yards outside the box. Keane described it as the 'pass of the season',...
PREMIER LEAGUE・14 DAYS AGO
ClutchPoints

Manchester City manager Pep Guardiola is wishing nothing but the best for his rival and now former Manchester United manager Ole Gunnar Solskjaer. Manchester United‘s humiliating loss to Watford marked the beginning of the end of Ole Gunnar Solskjaer’s reign as the famed club’s manager. The Red Devils have decided to finally fire Solskjaer after taking the heat for the team’s disastrous run in the English Premier League.
PREMIER LEAGUE・14 DAYS AGO

The 27-year-old has started the ongoing campaign in outstanding fashion, after being heavily linked with a move to Spain and Italy in the summer. Bernardo Silva, who scored in his side's 3-0 win against Everton in the Premier League on Sunday afternoon, has scored four goals and registered an assist in 16 appearances across all competitions for Manchester City since August.
PREMIER LEAGUE・12 DAYS AGO
The Independent

Manchester City boss Pep Guardiola claims Bernardo Silva is currently “undroppable”. The Portugal midfielder has enjoyed a fine start to the season after regaining his place in the Premier League champions’ side. The 27-year-old, who slipped down the pecking order last term, wanted to leave the club in the summer...
PREMIER LEAGUE・14 DAYS AGO
fourfourtwo.com

Pep Guardiola felt Raheem Sterling delivered a timely reminder of his abilities after scoring in Manchester City’s convincing 3-0 win over Everton on Sunday. The England forward grabbed the opening goal in what proved s comfortable afternoon’s work for the champions at the Etihad Stadium. It was the 26-year-old’s first...
PREMIER LEAGUE・14 DAYS AGO
Sporting News

Can Raheem Sterling be the solution to Manchester City's goalscoring problem?

No one at Manchester City has played more matches under Pep Guardiola than Raheem Sterling. And no one in the current squad has scored more goals under the Catalan during his five-year reign, either. So with goalscoring issues threatening to impact another Premier League title challenge, there is surely no...
PREMIER LEAGUE・13 DAYS AGO

Raheem Sterling scored his first Premier League goal since August as champions Manchester City eased to a 3-0 victory over lacklustre Everton on Sunday. Rodri added a stunning second and Bernardo Silva a late third as Pep Guardiola’s side responded to convincing victories by title rivals Chelsea and Liverpool on Saturday with a dominant display of their own.
PREMIER LEAGUE・14 DAYS AGO
90min.com

Pep Guardiola refused to discuss what the future holds for Raheem Sterling as the Man City winger continues to be linked with a move away. Sterling has scored just two goals in 15 games for City in all competitions so far this season, despite coming off the back of a stellar Euro 2020 campaign with England.
PREMIER LEAGUE・14 DAYS AGO
Daily Mail

'Nobody is selfish': Gabriel Jesus lauds the selfless streak running through Pep Guardiola's side as he hails Bernardo Silva for skilful assist that set up his winner for Manchester City against PSG

Gabriel Jesus has hailed the team spirit of Manchester City as a key factor to them coming from behind to defeat Paris Saint-Germain. City had fallen a goal down in the Champions League group stage encounter at the Etihad Stadium in the 50th minute following a Kylian Mbappe strike against the run of play.
PREMIER LEAGUE・10 DAYS AGO
SkySports

Pep Guardiola says Mauricio Pochettino is an "excellent manager", despite not having won as many trophies as some of his peers. Pochettino has been linked with the Manchester United job, in the wake of Ole Gunnar Solskjaer's departure, but his current focus is on an enticing Champions League clash at the Etihad on Wednesday, between his Paris Saint-Germain team and Guardiola's Manchester City.
PREMIER LEAGUE・12 DAYS AGO

Paris Saint-Germain are the best team in France by the length of an autoroute but still do not look ready to win a Champions League. That may one day be good news for Manchester United, who covet their manager Mauricio Pochettino. On Wednesday night it was good news for Manchester City who came from behind to deservedly beat them at the Etihad.
PREMIER LEAGUE・11 DAYS AGO
CityXtra

City - with a heavily rotated side - dominated Paris Saint-Germain at the Etihad Stadium to confirm qualification and top spot in Group A. Kylian Mbappe opened the scoring for the Parisians just after half-time with a well-taken finish at the back post. Manchester City were in control, but PSG had made their limited opportunities count.
PREMIER LEAGUE・10 DAYS AGO
BBC

Manchester City came back from behind to beat Paris St-Germain and secure qualification for the Champions League last 16 - doing so as Group A winners. City's outstanding display reaped the reward it deserved, as they showed character as well as class after Kylian Mbappe swept PSG into a 50th-minute lead.
PREMIER LEAGUE・10 DAYS AGO
BBC

Manchester City full-back Kyle Walker says playing under Pep Guardiola has helped him to understand football better. The 31-year-old has been a first-team regular under Guardiola since the former Barcelona and Bayern Munich boss signed him from Tottenham in 2017. Speaking to BBC Radio 5, Walker praised his manager's influence...
PREMIER LEAGUE・8 DAYS AGO
newschain

Manchester City made a statement with PSG victory – Pep Guardiola

Pep Guardiola felt his Manchester City team made a real statement as they came from behind to beat Paris St Germain and reach the Champions League last 16. Raheem Sterling and Gabriel Jesus struck as City responded to a Kylian Mbappe goal to claim a 2-1 win in a pulsating clash at the Etihad Stadium that sealed top spot in Group A.
PREMIER LEAGUE・10 DAYS AGO
CBS Sports

Manchester City welcome Paris Saint-Germain back to Etihad Stadium for the second time this calendar year in the UEFA Champions League on Wednesday on Paramount+. The first time was in the second leg of the UCL semifinals of the 2020-21 edition while this time it is in Group A of the 2021-22 campaign.
PREMIER LEAGUE・11 DAYS AGO
Telegraph

Manchester City will step up their attempts to secure Raheem Sterling to a long-term contract following his goalscoring return to Pep Guardiola’s team. The Premier League champions are ready to reject offers for the England forward amid interest from clubs including Barcelona. Sterling has scored in his last three City...
PREMIER LEAGUE・10 DAYS AGO
Daily Mail

'They have had an incredible season... it's not a secret': Pep Guardiola believes high-flying West Ham United are serious contenders for a Champions League place ahead of crunch clash with Manchester City

Pep Guardiola regards West Ham as serious contenders for a Champions League place as they put their credentials on the line at The Etihad on Sunday. No team from outside the Big Six has qualified for Europe's premier competition since Leicester in 2016 but David Moyes' team are currently fourth as they face a Manchester City side buoyant from their midweek win against PSG.
PREMIER LEAGUE・7 DAYS AGO