YouTuber, 33, who ‘invaded the Oval cricket ground and collided with England batsman Jonny Bairstow’ will stand trial next March

A YouTuber who ran onto the Oval cricket ground and bumped into England batsman Jonny Bairstow will stand trial next spring.

Daniel Jarvis, 33, from Gravesend, Kent allegedly invaded the pitch in south London and bowled at batsman Ollie Pope during England’s fourth test against India on September 3.

Mr Jarvis, who was wearing a cricket kit with ‘Jarvo 69’ on his back, bumped into Bairstow, sparking an angry exchange with the Yorkshireman.

Mr Jarvis wore black tracksuit bottoms, a t-shirt with a skull print and a charcoal hoodie to court and denied aggravated trespass. 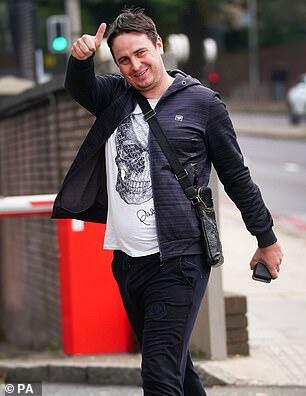 The YouTuber has an account with more than 163,000 subscribers and is known for filming himself pranking people, which he then uploads to the Internet.

The video Mr Jarvis uploaded of himself bumping into Bairstow has racked up 3.9 million views on YouTube.

The Kent man only spoke in court to confirm his name, address and date of birth before pleading not guilty to the single charge. 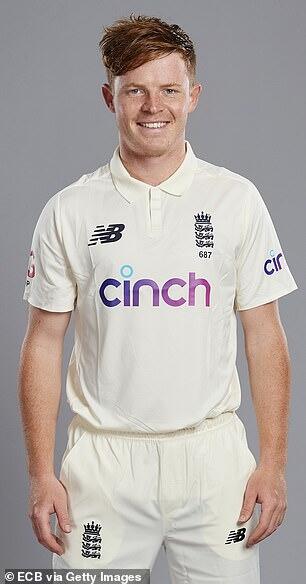 ‘As he did so he collided with Johnny Bairstow causing him to stumble and fall,’ she added.

‘The television broadcast which was taking place at the time had to be suspended until the defendant had to be removed from the pitch so the game could continue.'

Bruce Reid, defending Jarvis, said there was ‘no intention to commit any offence’.

The YouTube prankster had previously walked out with the India team at Lord’s and appeared in full batting kit at Emerald Headingley, Leeds.

Mr Jarvis' most successful video, which has over 25 million views, involved him dressing as a soldier in the Queen’s Guard.

Magistrates granted Mr Jarvis unconditional bail ahead of his trial on March 23 next year.

Liam Livingstone believes his emergence as one of the most feared white-ball players in the world may have cost him a dream Ashes call-up, but still feels he can be a force in Test cricket if England “take a punt”.Over the past year Livingstone’s career has touched new heights, becoming the six-hitting star attraction of the The Hundred and marking his comeback to the international fold this summer with a 42-ball T20 century against Pakistan – the fastest ever hundred by an England batter.He was also an ever present in the run to the last four of this month’s T20...
SPORTS・14 DAYS AGO
Telegraph

Cecilia Robinson, Kent and England cricketer who led her country on tour to Australia – obituary

Cecilia Robinson, who has died aged 97, played in 14 Test matches for England as a dogged opener who sold her wicket dearly; she scored two centuries against Australia, captained her country six times and put her expertise to good use by becoming a games teacher and senior house mistress of the junior house at Roedean School in Sussex, where cricket had long been part of the curriculum.
OBITUARIES・9 DAYS AGO
The Associated Press

Plenty of rain but not much practice for England cricketers

BRISBANE, Australia (AP) — The first of England’s Ashes warm-ups was abandoned after only 29 overs were possible in the three-day tour match between the two visiting sides. Persistent rain and storms restricted play on Tuesday and ensured no play was possible on Wednesday or Thursday between England and the...
WORLD・11 DAYS AGO
BBC

Lancashire County Cricket Club has unveiled plans for a second base. The club has identified land - owned by the county council - off Farington Road in Farington, near Leyland. Lancashire said there was a "pressing need" for a second ground due to the number of international and domestic matches...
SPORTS・4 DAYS AGO

SYDNEY (Reuters) – All-rounder Chris Woakes said England were preparing to play on a very different Gabba wicket in the first Ashes test next week after an unusually wet Brisbane spring left ground staff scrambling to prepare the surface. After days preparing in indoor nets, the England players finally got...
SPORTS・4 DAYS AGO
SkySports

Ash was the oldest-ever Test cricketer at the time of her death having debuted against Australia in 1937. She was described by the ECB as "a remarkable woman who led an extraordinary life". Right-arm seamer Ash made seven appearances for England either side of the Second World War, taking 10...
SPORTS・1 DAY AGO
The Independent

Australia head coach Justin Langer admits he still has “nightmares” about Ben Stokes’ Headingley heroics in 2019, but is glad to see him back for another crack at the Ashes.The all-rounder produced the performance of a lifetime when the sides faced each other on English soil two-and-a-half years ago, turning the tide of the Leeds Test with a superb bowling display then winning it with an unforgettable 135 not out.England fans will never forget his monumental efforts in that match and it seems like Langer, who was captured furiously kicking a waste bin to the floor during Stokes’ knock during...
SPORTS・1 DAY AGO
SkySports

That's the view of head coach Chris Silverwood with Stokes set to play his first Test since March and first full international of any kind since July after a spell away from the game rehabbing a finger injury and prioritising his mental wellbeing. Australia coach Justin Langer spoke earlier this...
SPORTS・11 HOURS AGO

England skipper Joe Root has declared himself ready for an Ashes series that will “define my captaincy”.Statistically Root is already his country’s most successful Test leader, overtaking mentor Michael Vaughan in the summer when he oversaw a 27th victory over India at Headingley.But he has yet to get the better of Australia having suffered a 4-0 defeat in his previous campaign Down Under followed by a 2-2 draw in 2019 which saw the tourists retain the urn.So when Root steps out for the first Test at The Gabba on Wednesday, he knows his very reputation is on the line.“Of...
SPORTS・21 HOURS AGO
AFP

England and Australia begin the latest edition of the Ashes at Brisbane on Wednesday with the visitors looking to wrestle back the urn. AFP Sport looks at five of the most memorable series between cricket's oldest enemies, a rivalry which stretches back to 1882: Australia retained the urn as holders despite the series being drawn for the first time since 1972, with Steve Smith grabbing headlines on his return from a ball-tampering ban by excelling in the face of taunting English crowds.
SPORTS・2 DAYS AGO
The Guardian

Who took over? Who walked away? Who kept going?
TENNIS・2 DAYS AGO
AFP

England haven't won a Test at Brisbane's 'Gabbatoir' since 1986 and will need to conquer those psychological demons to avoid another potentially fatal start to their Ashes campaign on Wednesday. But there is a glimmer of hope for Joe Root's men, despite their notoriously poor record at the formidable Gabba ground, where England have claimed just two Test victories since the end of World War II. It comes courtesy of India, who pulled off a stunning three-wicket upset in January, snapping Australia's undefeated red-ball streak in the Queensland capital stretching back to 1988. "Look at that India team that won at the Gabba. They were a long way from their first-choice XI but they had no fear," skipper Root said ahead of his departure for Australia.
WORLD・23 HOURS AGO

England captain Joe Root believes the hostile environment awaiting his side in their Ashes opener in Brisbane can help bond his side even closer together as they attempt to reclaim the urn behind enemy lines. Touring England teams are routinely treated to a fierce welcome Down Under, nowhere more so...
SPORTS・37 MINUTES AGO
Shropshire Star

There were just 26 seconds left on the clock when Wilkinson kicked a right-footed drop goal to clinch a 20-17 victory. Jonny Wilkinson’s extra-time drop goal gave England a dramatic 20-17 win over Australia in the World Cup final at Stadium Australia on this day in 2003. The Wallabies led...
RUGBY・14 DAYS AGO
Daily Mail

Prince Ernst of Hanover, the estranged husband of Princess Caroline of Monaco, has found love with a woman 20 years his junior, it has emerged. Ernst, 67, a distant cousin of the Queen, has been spotted out and about in Madrid with Spanish-born artist Claudia Stilianopoulos, 48, whose parents were friends with Princess Margaret.
CELEBRITIES・1 DAY AGO
BBC

The father of Ava White, who was stabbed to death in Liverpool, has said his family is "completely devastated and heartbroken" and thanked people for their ongoing support. The 12-year-old was out with friends in Liverpool city centre when she was attacked on 25 November. A 14-year-old boy has been...
PUBLIC SAFETY・2 DAYS AGO
firstsportz.com

Naomi Osaka has emerged as the frontrunner in women’s tennis since the last couple of years. She’s been very consistent- especially on hard courts and has 4 hard court majors to her name in the last 4 years. But the Japanese superstar was in news for other reasons too this season. It all started at Roland Garros where Naomi decided not to do the press conferences. Her decision received a lot of backlash after which she withdrew from the tournament before her second round match.
TENNIS・2 DAYS AGO
Daily Mail

Young motocross star, 19, and two others are killed in avalanche while skiing in Austria

Three people have died and two injured in an avalanche that hit while they were skiing in Austria, authorities have said. The victims were part of a group of 11 skiers, eight of whom were hit by a 200 metre (655 foot) wide slab of snow as they ascended a slope during a tour on Saturday in the Tweng area, Salzburg.
ACCIDENTS・15 HOURS AGO
The Independent

The head of the Mercedes-AMG Petronas Formula One racing team apologized Friday for the way the team announced its partnership with a company involved in a London high-rise where a fire killed 72 people.The team announced a sponsorship deal this week allowing building products maker Kingspan to put its logo on the nose cone of world champion Lewis Hamilton’s car beginning with a weekend race in Saudi Arabia. Survivors and family members of the people who died in the 2017 Grenfell Tower fire immediately condemned the deal and asked the team to sever its ties with Kingspan. The fire...
MOTORSPORTS・2 DAYS AGO