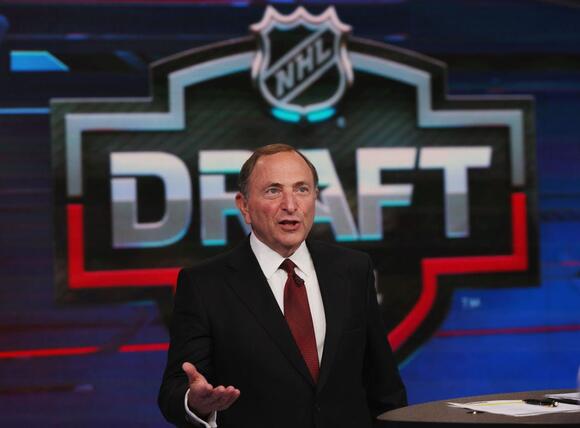 With the beginning of the NHL season kicking off tonight for the first time under a new network, league commissioner Gary Bettman made an appearance on ESPN’s Get Up to share his thoughts on the new season and the leagues high vaccination rate.

The NHL, like other pro sports leagues, has had to deal with the impacts of COVID-19, especially since they have a large presence in Canada which closed its borders.

“COVID is a fact of life for everybody, not just for NHL or all sports but we are all living with it,” Bettman said. “The good news is we have had very effective protocols to finish the 19-20 season, to have last season, where we had to realign because we couldn’t cross the Canadian border and for us, health and safety has always been our number one priority.”

Bettman continued, relaying how the health and well-being is of the most importance to the league, saying only four players have yet to be vaccinated out of a roughly 800-person league.

Some of the highlights from the start of the new NHL season include a new broadcast partner -- ESPN -- after the league chose to end their decade-long relationship with NBC, as well as the newest franchise in sports making their debut, the Seattle Kraken, who will take part in a double header Tuesday on ESPN, which will begin with the Pittsburgh Penguins visiting the Tampa Bay Lightning and the Kraken traveling to Las Vegas to meet the Golden Knights in the nightcap.

Following yesterday's press conference at the Bell Centre in Montreal, Quebec Premier Francois Legault told RDS that his government will be meeting with NHL commissioner Gary Bettman "in the coming months" to discuss the potential return for the Nordiques. "I spoke with [Mr. Bettman], and we have meetings with him...
NHL・14 DAYS AGO
Black Enterprise

Potentially enlarging his ownership holdings big time, LeBron James and the Fenway Sports Group (FSG) announced plans to acquire the Pittsburgh Penguins. The group has agreed to purchase a controlling stake in the National Hockey League team. The sale calls for FSG to spend about $900 million, Sportskeeda reported. The...
NBA・2 DAYS AGO
NBC Sports

The Sabres needed help in goal and have added Malcolm Subban to the mix following a Thursday trade with the Blackhawks for future considerations. Subban, a pending unrestricted free agent can be looked at as a short-term upgrade over Dell, with Subban and Tokarski handling the crease duties until Anderson is healthy. This also means that Sabres prospect Ukko-Pekka Luukkonen can remain in AHL Rochester and get regular playing time.
NHL・1 DAY AGO
Sports Illustrated

Meeting the media for his first availability since re-signing with the Minnesota Wild, Kirill Kaprizov looked chill. The star left winger had endured a protracted negotiation over the summer and had been rewarded with a new five-year pact worth $45 million and heightened expectations after he torched the league with his dazzling play as a 23-year-old rookie. So, was he feeling the pressure? “No, no, it’s not pressure,” Kaprizov said. “Now it’s easy for me (once) I signed. I just want to play, it’s like, phew, now it’s just hockey.”
NHL・14 DAYS AGO

We’re starting to get an idea of who some of the teams are that might be interested in Boston Bruins forward Jake DeBrusk now that his trade request has gone public.
NHL・2 DAYS AGO
Detroit News

Detroit — If you blink, you may have missed it. The NHL is a quarter of the way through its schedule, most teams right around the 20-game mark. It's never too early to formulate opinions of how the league is shaping up. The schedule has been fast and furious. The...
NHL・9 DAYS AGO
AdWeek

You could say that professional hockey is back but according to the National Hockey League’s (NHL) latest campaign, declaring it a “regular season” might be somewhat misleading. After all, hockey has more than its fair share of unpredictable moments, making this time of year far from “regular” for devoted fans of the sport.
NHL・7 DAYS AGO

Former Castleford Tigers playmaker Ben Roberts has spoken out in support of Canterbury Bulldogs forward John Asiata who has had his contract terminated for refusing the COVID-19 vaccine. In the wake of a lack of a competition mandate, clubs are taking their own action with the Bulldogs taking no prisoners...
PUBLIC HEALTH・10 DAYS AGO
FanSided

A 40-goal season is a fun milestone to hit for an NHL player. It’s not exactly a rarity. It’s happened 623 times in the history of the NHL. A lot of that happened in the roaring 70s and 80s. There was scoring in bunches, and the goalies seemingly had no choice but to watch the pucks go past them. That hasn’t been as prevalent recently.
NHL・8 DAYS AGO
kingstonthisweek.com

A guest submission from Spencer Gillis, who is a University of Toronto Fellow in Global Journalism:. This advertisement has not loaded yet, but your article continues below. Hot on the heels of the controversy surrounding Air Canada’s CEO’s French-language knowledge (or lack thereof), an age-old question has renewed momentum amongst Quebecers: After three decades of losing, is it time to embrace an anglophone as head of the glorious Montreal Canadiens, a symbol of francophone pride and excellence? The answer: They don’t need to; the franchise is spoiled with capable French-speaking candidates.
NHL・6 DAYS AGO
sportsmediawatch.com

The Lakers may be struggling on the court, but they remain a ratings draw. Plus: viewership is on the rise for the Premier League and MLS; the latest NHL numbers on TNT; and more. Big gains for struggling Lakers against East rivals. Friday’s Lakers-Celtics NBA regular season game averaged 1.74...
NBA・11 DAYS AGO

Aaron Ekblad had two goals and an assist and Anton Lundell scored twice the as Florida Panthers rallied from a
NHL・16 HOURS AGO
Sportsnet.ca

Jack Eichel, less than a month after neck surgery, is back on the ice

Jack Eichel is back on the ice. Eichel, who had artificial disk replacement surgery on Nov. 12, has recovered enough to return to the ice to take a few laps in a video shared Thursday by the NHL's social account. In the video, Eichel does a couple of stable but...
NHL・1 DAY AGO
bostonhockeynow.com

Boston Bruins winger Brad Marchand has heard the complaints around the NHL, mostly on social media, that he’s “xenophobic” or “insensitive” because he chirped New York Rangers star Artemi Panarin about his unpopularity back home in Russia after his anti-Putin comments. The comments spurred Panarin to fire one of his...
NHL・3 DAYS AGO
Sportsnaut

The NHL season officially started on October 12. In this article, we track all the NHL games today as well
NFL・17 HOURS AGO
News 12

The Islanders had to postpone two games because of a COVID-19 outbreak, which included eight players.
NHL・2 DAYS AGO
Sportsnaut