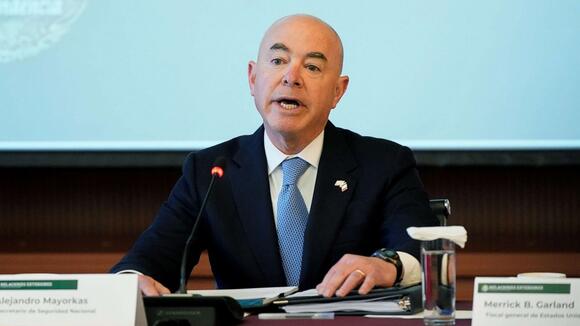 Immigration and Customs Enforcement is ending the practice of deportation raids on worksites, Secretary of Homeland Security Alejandro Mayorkas said in a memo on Tuesday.

"The deployment of mass worksite operations, sometimes resulting in the simultaneous arrest of hundreds of workers, was not focused on the most pernicious aspect of our country's unauthorized employment challenge: exploitative employers," Mayorkas wrote in the memo. "These highly visible operations misallocated enforcement resources while chilling, and even serving as a tool of retaliation for, worker cooperation in workplace standards investigations."

He added the worksite operations go against the department’s civil rights code.

Mass worksite raids became more common after the first year of the Trump administration. One of the largest coordinated raid operations was conducted across multiple poultry plants in Mississippi in August 2019, resulting in the arrest of nearly 700 workers.

Four executives in charge of the poultry plants were indicted about a year after the raids.

MORE: What is Title 42? Amid backlash, Biden administration defends use of Trump-era order to expel migrants

Mayorkas said his department will "develop agency plans to alleviate or mitigate the fear that victims of, and witnesses to, labor trafficking and exploitation may have regarding their cooperation with law enforcement in the investigation and prosecution of unscrupulous employers."

"The previous Administration too often carried out raids that tore apart communities but allowed employers to continue exploiting workers," he said in a statement. "Refocusing resources to counter exploitative employers is a necessary step in protecting the American labor market and workers. I appreciate the Department’s efforts to protect workers who sound the alarm on labor violations."

"By ending worksite raids and acknowledging that workers should not have to endure the threat of deportation when they courageously come forward to report labor violations, this policy begins to move the country in the right direction," Nadia Marin-Molina, NDLON Co-Executive Director, said.

Former acting Homeland Security Secretary Chad Wolf, who served as homeland security secretary under President Donald Trump, said the DHS should not be choosing to enforce the law against one group versus another. Wolf said that large-scale operations are not common and usually supported by federal prosecutors.

"Implying that past actions from ICE criminal investigators were wrong is not accurate and another shot at DHS law enforcement and continues the politicizing of DHS under this admin," Wolf tweeted . "Instead of supporting professional agents, DHS is ending a perfectly legal tool in order to appease left wing progressives who want to abolish ICE."

Senator Tom Cotton, R-Ark., accused President Biden of "weakening immigration law enforcement even further," as a result of the DHS announcement on ICE raids. "American workers and their wages will suffer as a result.”

WASHINGTON - The U.S. government announced Friday it will provide more than $20 million to nearly 700,000 asylum seeks, refugees and vulnerable migrants in Central America and Mexico. The additional funding, provided through the Department of State’s Bureau of Population, Refugees, and Migration (PRM), will "help meet urgent humanitarian needs,"...
IMMIGRATION・16 HOURS AGO
Reuters

Oct 15 (Reuters) - President Joe Biden's administration is taking steps to restart by mid-November a program begun under his predecessor Donald Trump that forced asylum seekers to wait in Mexico for U.S. court hearings after a federal court deemed the termination of the program unjustified, U.S. officials said Thursday.
POTUS・22 HOURS AGO
ABC7

The Biden administration plans to reinstate a Trump-era border policy requiring asylum seekers to wait in Mexico for hearings in U.S. immigration court.
POTUS・22 HOURS AGO

Over 94,000 Migrants In Southern Texas Released Into The US With Notices To Report, Leaked Docs Show

Just over 94,500 migrants who entered the U.S. illegally were encountered by border officials in southern Texas and released into the country with notices to report, according to data obtained by Fox News on Wednesday. The migrants were encountered in Texas’ Rio Grande Valley and Del Rio sectors since March...
TEXAS STATE・1 DAY AGO
Fox News

Congressmen denied access to Afghan refugees at US base in Qatar, Rep. Issa says

Several congressmen, including members of both political parties, were denied access to Afghan refugees at Al Udeid Air Base in Qatar, Republican California Rep. Darrell Issa told Fox News. Issa told Fox News in a Thursday phone call that he is "frustrated that the administration decided to deny us oversight...
FOREIGN POLICY・1 DAY AGO
Washington Times

Illegal immigration is destroying our country

Britain’s Home Office says more than 12,500 migrants have broken the law to get into the U.K. so far this year. Compare this to the nearly 200,000 migrants who have crossed the virtually nonexistent southern border just in July of this year. The count is estimated by the overwhelmed U.S. Customs and Border Protection, a name that is almost contradictory given the Biden administration’s refusal to enforce the law and secure the border. It helps that Britain has a natural channel separating it from the continent, while our border resembles Swiss cheese.
IMMIGRATION・3 DAYS AGO
Forbes

How One Refugee Story Demonstrates So Much Of What Is Wrong With The U.S. Immigration System

On August 16, 2019, a married Cuban couple—both doctors—arrived at the U.S. border crossing in Nogales, Arizona seeking asylum after they’d been branded and jailed as dissidents by the Cuban government. But this unfortunately wasn’t the end of the hellish journey out of Cuba for Merlys Rodriguez Hernandez and her...
IMMIGRATION・1 DAY AGO

Many immigrants look at the U.S. as a safe country with opportunities to build a better life for themselves and their children. However, with the immigration system becoming more and more backlogged with millions of green card applications, many still have no chance to enter legally. The immigration systems backlog...
IMMIGRATION・1 DAY AGO
CBS News

Out of hundreds of thousands of migrants who have been processed under a pandemic-era policy at the southern border, just over 3,200 asylum-seekers have been screened for U.S. humanitarian protection, according to unpublished government data obtained by CBS News. Since March 2020, U.S. authorities along the border with Mexico have...
IMMIGRATION・2 DAYS AGO
TIME

The device, known as The WRAP, placed men from Cameroon and Uganda in stress positions for hours, complaint says
SAN DIEGO, CA・2 DAYS AGO
wabcradio.com

In response to the federal government putting a stop to mass deportation raids on work sites, two words spring to mind: Good riddance. These raids, which were common under former Presidents George W. Bush and Donald Trump, were problematic on several different levels and didn’t accomplish their stated purpose of being a deterrent to the employment of undocumented immigrants in American businesses. Mainly, they were political posturing by Bush and Trump to rev up xenophobic Republican voters.
IMMIGRATION・2 DAYS AGO
CBS News

WASHINGTON – The Department of Homeland Security said Tuesday that it will stop raiding workplaces to search for undocumented immigrants and will focus instead on “unscrupulous employers who exploit the vulnerability” of undocumented labor. The announcement reverses a Trump-era policy of workplace raids by Immigration and Customs Enforcement agents that...
U.S. POLITICS・2 DAYS AGO
The Independent

Federal immigration agents will end mass workplace arrests of immigrant employees suspected of living in the U.S. without legal permission, according to a memo issued Tuesday by Homeland Security Secretary Alejandro Mayorkas Instead, the focus will shift to pursuing “unscrupulous employers who exploit the vulnerability of undocumented workers” and emphasize fighting worker abuse including paying substandard wages, unsafe working conditions and human trafficking. The three-page memo directs the heads of Immigration and Customs Enforcement Customs and Border Protection and Citizenship and Immigration Services to draw up a plan within two months to increase employer penalties, encourage workers to...
IMMIGRATION・3 DAYS AGO
WEKU

Immigration and Customs Enforcement agents will no longer conduct mass raids on workplaces where undocumented immigrants are employed, according to a new order by Homeland Security Secretary Alejandro Mayorkas. The real problem, Mayorkas said in a memorandum released Tuesday, are "exploitative employers," not unauthorized workers. Trump-era raids became tools for...
IMMIGRATION・3 DAYS AGO
Washington Post