ESPN’s NHL experts don’t have much faith in Bruins 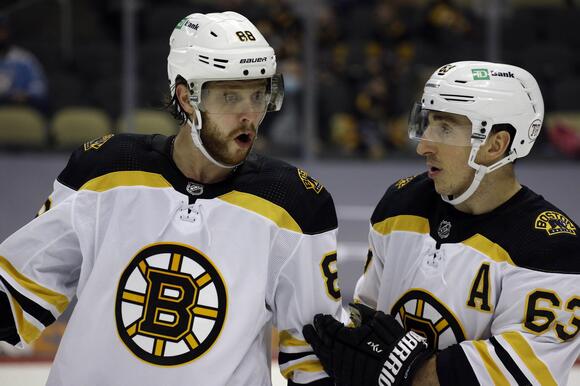 The NHL returns to ESPN with Tuesday’s opening night doubleheader. Ahead of that, the network gather its team of NHL analysts -- some old, some new -- for some season predictions.

When it comes to the Bruins, they don’t seem to have much faith. Of their 22 experts, only one is picking the Bruins to win the Atlantic Division this season: longtime coach-turned-studio analyst John Tortorella.

Now, your first thought might be that this makes perfect sense because a bunch of them probably picked the two-time defending Stanley Cup champion Tampa Bay Lightning. Wrong. Only seven picked the Lightning to win the division.

The most popular Atlantic pick, somewhat surprisingly, is the Florida Panthers. Ten of the 22 went with the chic choice, signaling that the Panthers have perhaps moved from under-the-radar good to widely acknowledged good. The remaining four votes went to the Toronto Maple Leafs.

Unsurprisingly given the division picks, none of the 22 picked the Bruins to win the Cup. The most popular pick there was the Colorado Avalanche with seven votes.

One area where the Bruins got a little more love was in the Norris Trophy predictions. Four of the 22 picked Boston star Charlie McAvoy, giving him the second-most votes behind Colorado’s Cale Makar (11). The four who picked McAvoy were Sean Allen, John Buccigross, Don La Greca and Greg Wyshynski.

Two people (Sachin Chandan and Steve Levy) picked David Pastrnak to win the Rocket Richard Trophy as the league’s leading goal-scorer, and one (Sean McDonough) picked Jeremy Swayman to win the Calder Trophy as the rookie of the year.

It seemed like a pretty comical moment towards the end of the New York Rangers 5-2 win over the Boston Bruins. Artemi Panarin and Bruins super-pest Brad Marchand were jawing at each other. The confrontation ended with Panarin throwing his glove at Marchand. ABC commentator, AJ Mleczko was in between the benches when the altercation took place. “I don’t mean to laugh,” she said. “It is heated and intense.”
NHL・3 DAYS AGO
Forever Blueshirts - New York Rangers News

Rangers roll over Bruins; Marchand made Russian taunts to Panarin

The New York Rangers beat the Boston Bruins 5-2 in the NHL’s Thanksgiving Showdown. However, it’s what Brad Marchand said to Artemi Panarin after the game that’s making the headlines. Broadway’s Breadman scored the go-ahead goal with 8:25 to play the third period and added an assist to help lead...
NHL・2 DAYS AGO
WEEI Sports Radio

The Boston Bruins did not sign Derek Forbort for offense. Yet the defenseman now has four goals in 14 games after his first career two-goal game in Saturday’s 5-2 win over the Philadelphia Flyers.
NHL・8 DAYS AGO
WEEI Sports Radio

Sportsnet’s Elliotte Friedman was asked during his latest appearance on The Jeff Marek Show if goaltender Tuukka Ras is destined to play with the Boston Bruins this season. More than that, Marek wanted to know if only the Bruins had a shot at the veteran netminder considering the player’s comments that he’d like to come back to his former team and that money wouldn’t/shouldn’t be an issue.
NHL・10 DAYS AGO
WEEI Sports Radio

The Boston Bruins decided to sign Linus Ullmark for $5 million a year this offseason rather than hang onto Dan Vladar for just $750,000. A month and a half into the season, that decision looks like a costly miscalculation.
NHL・7 DAYS AGO
WEEI Sports Radio

The Bruins arrived in Buffalo with the idea that Linus Ullmark was going to start Wednesday night against the Sabres and remain in net for Friday’s matinee head-to-head with the Rangers back at TD Garden. But the morning skate came with the 28-year-old ‘tweaking’ something and knocking him out of...
NHL・4 DAYS AGO

How alarming is it that the Bruins can't beat any of the NHL's best?

The Boston Bruins are not in a horrible spot in the Eastern Conference and Atlanta Division standings through their first 15 games (9-6-0) of the 2021-22 NHL season. There is one concern that hasn't been alleviated. In fact, it's gotten worse. The Bruins are having an awful time beating good...
NHL・6 DAYS AGO
stanleycupofchowder.com

Boston Bruins Marchand Will Have NHL Hearing For Slew-foot

Boston Bruins winger Brad Marchand willed his team to victory over the Vancouver Canucks on Sunday night with an epic third period performance that included playing a key role in the goals that tied it up and eventually gave Boston a 3-2 come-from-behind victory. It appears there may be a...
NHL・7 HOURS AGO
CBS Boston

BOSTON (CBS) — Bruins winger Brad Marchand was dominant on Sunday night against the Canucks, scoring a game-tying goal and registering a primary assist on the go-ahead goal, both of which came in the third period of Boston’s 3-2 win. This development no doubt irked many Canucks viewers back in Vancouver, as Marchand has never been the most celebrated player in British Columbia, dating back to his and the Bruins’ Stanley Cup win over the Canucks in 2011. Capping off some chaos. Marchy's tying goal on the power play is tonight's @JagermeisterUSA Shot of the Game!@Bmarch63 | #NHLBruins pic.twitter.com/8mpV8cDTtO — Boston Bruins (@NHLBruins) November...
NHL・8 HOURS AGO

Blue Jackets shut out Jets in Dubois return to Columbus

COLUMBUS -- Elvis Merzlikins made 36 saves for his first shutout of the season, and the Columbus Blue Jackets defeated the Winnipeg Jets 3-0 at Nationwide Arena on Wednesday. Gregory Hofmann, Zach Werenski and Andrew Peeke scored for the Blue Jackets (11-6-0), who have won four of five. Merzlikins made...
NHL・4 DAYS AGO
NESN

BOSTON — The Boston Bruins got a second lease on life in the first period of Sunday’s game against the Vancouver Canucks. After Anton Blidh scored his first goal of the season to tie the game at 1-1, Conor Garland scored to give Vancouver a one-goal advantage. But Bruins head coach Bruce Cassidy challenged the ruling and the goal was called back to make it an tie game yet again.
NHL・21 HOURS AGO
The Hockey Writers

In today’s NHL rumors rundown, there is an update on talks between the Nashville Predators and Filip Forsberg. Meanwhile, Artemi Panarin was fined $5K for throwing a glove at Brad Marchand, but was he justified in doing so? Finally, the Ottawa Senators are expected to waive goaltender Matt Murray. What’s the play here and who might be interested?
NHL・2 DAYS AGO
WEEI Sports Radio

Linus Ullmark made a huge breakaway save in the Boston Bruins’$2 3-2 win over the Vancouver Canucks on Sunday. He also gave up a pair of goals he probably should’ve had. It was a continuation of the Bruins’ struggles to find some rhythm in net.
NHL・9 HOURS AGO
WEEI Sports Radio

These Brad Marchand takeovers will only get Bruins so far

The good news for the Boston Bruins is that Brad Marchand can completely take over a game like he did Sunday night. The bad news is that they needed that kind of Marchand takeover just to squeak out a win against the lowly Vancouver Canucks.
NHL・16 HOURS AGO
Yardbarker

Marchand had a hearing on Monday and learned he earned a three-game suspension for his crime, according to the NHL's website. He will forfeit $91,875 as part of his punishment, and that money will go to the Players' Emergency Assistance Fund. "It is important to note that there are many...
NHL・14 MINUTES AGO