The 22-year-old left his boyhood club under a cloud after running down his contract and joining Paris Saint-Germain on a free transfer over the summer.

He returned to the San Siro last week for Italy's clash against Spain in the Nations League semi-final. 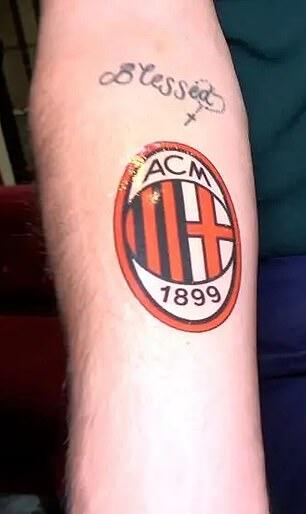 Donnarumma was jeered by fans throughout a 2-1 defeat for the 10-man Azzurri against Spain.

However, the goalkeeper allowed a Milan crest to be printed on his arm whilst appearing appearing on the Le lene TV show over the weekend.

As the interview was ending, the reporter asked: 'When you get to Paris, you go to a tattoo artist and make it permanent?'

After his frosty reception at the San Siro, Donnarumma said he hoped that in time he could win the fans over.

'There is a bit of disappointment with the whistles. I spent eight years at Milan and it's always an emotion to come back to San Siro. I grew up here and I remain a supporter of the club.

'You don't forget eight years like that… I hope to be better welcomed next time.'

The Argentine, who left Barcelona in the summer, has also discussed the Red Devils' turbulent start to the 2021-22 campaign. Paris Saint-Germain superstar Lionel Messi has given his opinion on Cristiano Ronaldo's return to Manchester United while reflecting on his rivalry with the Portugal international. Ronaldo re-signed for United after...
PREMIER LEAGUE・10 DAYS AGO
Daily Mail

AC Milan have confirmed manager Stefano Pioli has signed a new contract with the club until June 2023, with the option of a further one year. Pioli, 56, put pen-to-paper on the deal at AC Milan's Casa Milan, the headquarters of the Serie A giants. The Rossoneri head coach will...
SOCCER・7 DAYS AGO
Yardbarker

It was a special match for Brahim Diaz this evening, being on loan from Real Madrid, as AC Milan claimed all three points away at Atletico Madrid. He did well on the pitch and he was very happy afterwards. The Spaniard showed glimpses of the player we admired so much...
SOCCER・8 DAYS AGO
Tribal Football

AC Milan fullback Theo Hernandez faces running a gauntlet tonight against Atletico Madrid. Theo is set to start the Champions League clash at his former club and has upset fans in the lead up after being snapped walking on the club's crest at the Wanda Metropolitano. It's been a tradition...
SOCCER・9 DAYS AGO

Atletico Madrid coach Diego Simeone defended his players after their 1-0 home defeat to Champions League opponents AC Milan. Junior Messias headed home Milan's winner in the second-half. “I do not agree that it was a bad performance and I have nothing to reproach the team," insisted Simeone in his...
UEFA・8 DAYS AGO
Daily Mail

After being dropped by Man City and revealing he was open to leaving, Raheem Sterling has endured a mixed year (despite his Euro 2020 heroics with England!)... but now he's showing signs of getting back to his best with three goals in three games

There was little relief when Raheem Sterling tucked home against Paris Saint-Germain, a crucial goal which hauled Manchester City level in the Champions League. Instead, as he wheeled away to celebrate, his face sported sheer jubilation. It was far from the tidiest strike he has scored in his career, but...
PREMIER LEAGUE・5 DAYS AGO
froggyweb.com

MILAN (Reuters) – AC Milan coach Stefano Pioli outlined his ambitious plans for the club after signing a contract extension until 2023 as he bids to restore the seven-times European Cup winners to the pinnacle of the game. Milan won the last of their 18 Italian league titles in 2011...
SOCCER・6 DAYS AGO
World Soccer Talk

Milan (AFP) – AC Milan missed the chance to move top of Serie A on Sunday after crashing to a shock 3-1 home loss to Sassuolo which gives Napoli the opportunity to move clear at the summit. Sassuolo emerged worthy winners at the San Siro after recovering from Alessio Romagnoli’s...
SOCCER・5 DAYS AGO

Former Real Madrid center back Sergio Ramos hadn’t played for PSG since signing with the club this summer. Break-ups are hard, and Madridistas were shocked when the club did not re-sign Ramos and the No. 4 chose to play for PSG. A club legend who accomplished everything there is to accomplish in Madrid, Ramos was more than just a world-class center back. He was a leader, an icon.
SOCCER・5 DAYS AGO
LFCTransferRoom

Gianluigi Donnarumma has been crowned 2021 Yashin Trophy winner at the Ballon d'Or awards holding off Edouard Mendy in 2nd place and Jan Oblak in 3rd. The Italian was an important part of Roberto Mancini's Euro 2020 team that famously won the trophy at Wembley against England. After coming through...
PREMIER LEAGUE・3 DAYS AGO
AFP

Paris Saint-Germain have been milking the fact that they have this year's Ballon d'Or winner in their ranks, but Lionel Messi was crowned the world's best player for the seventh time in his glittering career entirely because of what he achieved elsewhere. At 34, perhaps Messi was principally rewarded for his enduring brilliance by jurors as he won the prize ahead of much-fancied rivals including Robert Lewandowski and Karim Benzema. However, he still scored 38 goals in his final campaign with Barcelona, was top scorer in La Liga, won the Copa del Rey and captained Argentina to victory at the Copa America. As he collected his prize in a ceremony in the French capital on Monday, PSG president Nasser al-Khelaifi was there and spoke of his "immense pride that one of our players has won the most prestigious and coveted award".
SOCCER・14 HOURS AGO
SPORTbible

Lionel Messi emphatically denied a request from a director involving his wife ahead of winning his seventh Ballon d'Or on Monday night. Messi beat Robert Lewandowski, Jorginho and Karim Benzema to the prize, which was presented to him by former teammate and close friend Luis Suarez. Before the ceremony got...
SOCCER・3 DAYS AGO

Manchester United's soon-to-be new manager once called Cristiano Ronaldo "too old and too expensive." Ralf Rangnick made the comment when asked if he would sign Ronaldo for RB Leipzig in 2016. It is a worrying sign for the Portuguese forward's future at Old Trafford. Manchester United's soon-to-be new manager Ralf...
PREMIER LEAGUE・6 DAYS AGO
The Independent

Cristiano Ronaldo has paid tribute to Ole Gunnar Solskjaer following the Norwegian’s sacking as Manchester United coach.Solskjaer was relieved of his duties on Sunday morning, with his side having fallen to a 4-1 defeat at struggling Watford on Saturday.That result was the latest in a poor run that had included a 5-0 home thrashing by rivals Liverpool and a 2-0 derby loss to Man City.Ronaldo returned to United this summer to play under Solskjaer, who was a teammate of the Portuguese at Old Trafford between 2003 and 2007.Now the 36-year-old has bid Solskjaer a warm farewell, writing on...
PREMIER LEAGUE・11 DAYS AGO
Daily Mail

Phil Neville has jokingly claimed that Cristiano Ronaldo owes him for helping him to secure his move to Manchester United, following the superstar's destructive cameo against his current club in 2003. Casting his mind back to a pre-season friendly between United and Sporting Lisbon, then Ronaldo's team, Neville recalled to...
PREMIER LEAGUE・14 DAYS AGO
Insider

"It is unacceptable that the person responsible for awarding such a prestigious prize could lie in this way," Ronaldo said.
SOCCER・3 DAYS AGO
The Guardian

Clockwatch: Chelsea, Man City and Liverpool all won to keep the pressure on each other at the top of the table, while Everton fans are increasingly mutinous
PREMIER LEAGUE・1 DAY AGO
ESPN

Count the Ballon d'Or as one of those grand old institutions that's insanely popular. There are several reasons for it, too. There's history: The Ballon d'Or dates back to 1956, which means it predates the European Championships, yellow and red cards, substitutions, color TV, remote controls and of course, FIFA (the video game). There's the fact that top players really, really care about winning it: Clubs mount campaigns on behalf of their star players, guys like Cristiano Ronaldo (despite already having five of these at home) get annoyed when it gets canceled (like it did last year due to the coronavirus pandemic), while Bayern Munich striker Robert Lewandowski's face lit up like a child hearing reindeer footsteps on the roof when he found out he was among the favorites.
MLS・3 DAYS AGO
The Independent

If you are already bored of the interminable debate over whether Cristiano Ronaldo is a help or a hindrance to Manchester United, bad news, this is just the beginning. It is not going away any time soon, partly because he is not going away any time soon either. Just as Old Trafford prepares to enter the gegenpressing era and even more attention is paid to what he does off the ball, he keeps winning matches with what he does on it.That might ignore some of the particular nuances in the arguments over Ronaldo’s role in this team, on both sides...
PREMIER LEAGUE・20 HOURS AGO
The Independent

When Thomas Tuchel comes in after games and scans the other results, he doesn’t automatically go to Liverpool or Manchester City. At least not yet.“There are some teams behind us who show consistency, who show quality, who show determination,” the Chelsea manager said last week. “This is what it is. You have a right to be proud of your competition here, in the Premier League, and for us it feels good because we are in the middle of that race and we want to stay here. I don’t know if it will settle down.”There is a bit of a...
PREMIER LEAGUE・2 DAYS AGO