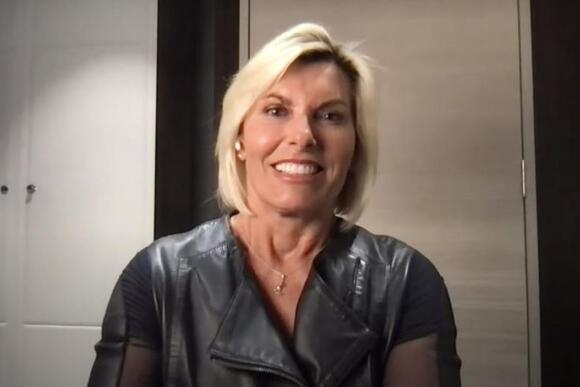 Yawn appeared on Monday's episode of Watch What Happens Live after firing Wilson in Below Deck Mediterranean Season 6.

Yawn fired Wilson in the show's Sept. 13 episode following Wilson's conflicts with her crew mates, including a fight where Wilson told chef Mathew Shea, "Your parents should have aborted you."

On WWHL, host Andy Cohen asked Yawn for her thoughts after seeing more of what went on between Wilson and her crew mates.

"Disturbing, and I wish that the crew would have really painted the picture for me. Just hearing it's bad isn't a description of behavior. So you know, in a position that I'm in, I need to know details and I never really got details until the end, and that's when I let Lexi go."

Yawn previously discussed the situation with Wilson in an interview with Us Weekly.

"Of course I wanted to let her go. I never would have hired her. I don't hire the crew. Everybody knows that," Yawn said.

Below Deck Mediterranean is a reality series that follows the crew of a superyacht during charter season. The show is in its sixth season on Bravo and co-stars Katie Flood, Malia White, David Pascoe, Lloyd Spencer and Mzi "Zee" Dempers.

I think the crews that work on these boats are so unprofessional,they gossip about each other and make fun and remarks about the guest,the captain should always be aware as to what's going on with her crew and the issues they have and that's the reason i stopped watching the show!

Below Deck Med star Malia White shared the details of her scooter accident. In July 2021, the boatswain ended up in a gruesome accident. She shared the photos on social media. Malia walked away with broken bones, scrapes, and stitches. The reality star is lucky to be alive. She’s also...
CELEBRITIES・11 DAYS AGO
CinemaBlend

Below Deck Med Star Malia White Talked About Her Hospital Stay After Scooter Accident, And It Sounds Brutal

Earlier this summer, Malia White was riding a Vespa on the streets of Mallorca, Spain when she took a gnarly tumble. Her pictures from the hospital after the accident show just how bad it really was for the Below Deck: Mediterranean star, given she was wrapped up like a mummy from head to toe. In fact, she said at the time that she'd suffered a fractured elbow and broken toes, while growing a new appreciation for helmet protection. Months later, the notorious Bravo bosun relfected on the accident and shared exactly how brutal the hospital stay itself was for someone accustomed to the U.S. medical system.
ACCIDENTS・11 DAYS AGO
TVShowsAce

Captain Sandy Yawn Spotted With Kate Chastain And Ben Robinson — What Does This Mean?!

Below Deck Mediterranean star Captain Sandy Yawn has fans wondering what she’s up to. She was spotted with Below Deck alumni Kate Chastain and Chef Ben Robinson. They want to know why the trio was suddenly hanging out together. Is there a new Below Deck spin-off series in the works?
TV SHOWS・8 DAYS AGO

Captain Sandy, From the Reality Show “Below Deck”, is Coming to Franklin

Captain Sandy is taking a break from Bravo’s “Below Deck” and going on tour with a stop in Franklin. On Thursday, March 3, 2022, you can see Captain Sandy at the Franklin Theatre, the show begins at 7:30 pm. During the event, Sandy will share stories of how she navigated...
FRANKLIN, TN・7 HOURS AGO
TVShowsAce

‘Sister Wives’: Ysabel Brown Gets A Piece Of Kody After Christine Drama

Sister Wives star Ysabel Brown gets a piece of Kody after Christine drama. Find out why his daughter called her dad out for having ‘messed up’ priorities. Kody Brown declines to accompany daughter cross-country for serious surgery. Season 16 of Sister Wives is a year behind real-life events in the...
TV & VIDEOS・1 DAY AGO
Reality Tea

Below Deck Recap: Training Day’s Over

So where were we, yachties? Oh right, the bomb Jake Foulger dropped that he was engaged. The next morning, the entire Below Deck crew wakes up hungover as all get out, with Rayna Lindsey more than prepared to spread that bit of gossip all over the yacht. However, Jake is quick to clarify: yes, he’s […] The post Below Deck Recap: Training Day’s Over appeared first on Reality Tea.
BOATS & WATERCRAFTS・12 DAYS AGO
ETOnline.com

While there’s no shortage of laughs on Saved by the Bell, there’s also some unexpected tears -- well, happy tears -- thanks to an unexpectedly powerful episode that arrives halfway through season 2. Written by Chris Schleicher and Jen Chuck and directed by Heather Jack, “From Curse to Worse” sees Lexi (Josie Totah) suddenly forced to speak out when a competing school bans a transgender girl from its soccer team. But instead of taking on the fight with her fellow LGBTQ students, she attempts to write a play that will solve transphobia once and for all.
TV & VIDEOS・5 DAYS AGO

Will Smith has admitted his “heart shattered” when his son Jaden asked to be emancipated when he was a 15-year-old. The King Richard star opened up about the struggles his son faced after their 2013 film After Earth bombed commercially and critically, with Jaden enduring attacks from the media. Writing...
RELATIONSHIPS・28 DAYS AGO
TVShowsAce

Vanderpump Rules alum Jax Taylor and Brittany Cartwright are at the center of marital issues. On the surface, the two appear to be happy. Back in April, the couple welcomed their first child, son Cruz. However, Jax appeared to be a little hesitant about having any more children. As fans...
RELATIONSHIPS・1 DAY AGO
E! News

Watch: Taylor Swift Teases New Short Film for "All Too Well" Another album, another batch of Easter eggs. Taylor Swift released Red (Taylor's Version) on Friday, Nov. 12, and fans are diligently combing through the lyrics for hints as to who she's singing about. Swifties have long suspected that the...
CELEBRITIES・23 DAYS AGO
Insider

"Katie is an old friend and old friends can say anything they damn well please," Martha Stewart said on Thursday's episode of "Watch What Happens Live."
CELEBRITIES・2 DAYS AGO

America's Got Talent has lost another performer, and at such a young age. Jay Jay Phillips, who made an impact during two seasons of the NBC reality competition, died at 30 after complications from COVID-19. According to the New York Daily News, the AGT alum was reportedly unvaccinated but had told people he planned on getting the shot before Thanksgiving.
PUBLIC HEALTH・2 DAYS AGO
goodhousekeeping.com

Mayim Bialik Fans Are Going to Freak Out Over This Exciting 'Jeopardy!' News

Jeopardy! fans, Mayim Bialik is returning to the show sooner than you think. After officially being named an interim host of the beloved quiz show on September 20 following a successful run as a guest host, her time reading clues to Jeopardy! contestants came to an end on November 5. But only days after handing over temporary hosting duties to Jeopardy! legend Ken Jennings, the game show made an exciting announcement about Mayim coming back to the lectern before the end of the year.
TV SHOWS・12 DAYS AGO