By Gustaf Kilander and Graeme Massie
The Independent
2021-10-12 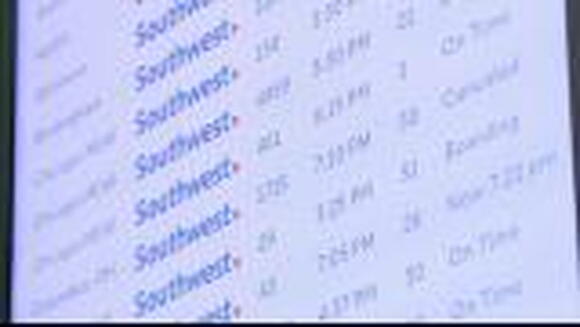 Southwest Airlines CEO Gary Kelly has said that a vaccine mandate has been forced on the company by the Biden administration but that the demand for staff to get the shots has had “zero” effect on delays and cancellations in recent days.

Mr Kelly told CNBC that he’s “never been in favour of corporations imposing that kind of a mandate – I’m not in favour of that, never have been. But the executive order from President Biden mandates that all federal employees and then all federal contractors, which covers all the major airlines, have to have a [vaccine mandate] in place by December the 8th, so we’re working through that”.

The airline CEO said the vaccine mandate has made “zero” contribution to the staggering number of cancelled flights over the weekend.

“We look at all our employee behaviour in terms of absenteeism, in terms of people volunteering to come in and pick up what’s referred to as ‘open time’ and they’re all very normal,” Mr Kelly said. “The president of our pilots’ union has been out talking to the media confirming all of that. I think that people who understand how airlines work – when you get behind, it just takes several days to catch up.”

The CEO added that opposition to vaccine mandates was not what caused the cancellations over the weekend.

“We’re urging all our employees to get vaccinated,” he said. “If they can’t, we’re urging them to seek an accommodation, either for medical or religious reasons. My goal is of course is that no one loses their job. The objective here is to improve health and safety – not for people to lose their jobs.”

“Yes, we have some very strong views on that topic,” he said about the mandates, adding: “But that’s not what was at issue with Southwest over the weekend.”

Southwest Airlines cancelled at least 1,800 flights just days after its pilot union sued the company over its Covid -19 vaccine mandate.

Southwest was forced to cancel more than 1,000 flights on Sunday, around 30 per cent of its US schedule, according to the FlightAware website.

And it blamed “disruptive weather” and air traffic control issues for its problems.

But the Federal Aviation Administration said that airlines were experiencing problems because of their own difficulties with staffing and aircraft.

Another 800 flights were cancelled on Saturday, according to The Washington Post.

The airline said in a Sunday statement that its problems began on Friday because of weather issues at its Florida airports that “were compounded by unexpected air traffic control issues in the same region, triggering delays and prompting significant cancellations for us beginning Friday evening”.

Southwest’s issues with weather and traffic control did not appear to be shared by other airlines.

American Airlines reportedly had around 63 cancellations as of early Sunday afternoon and United Airlines only had nine.

The FAA responded by saying that there were some air traffic staffing issues but that the main issue belonged to the airlines.

“Flight delays and cancellations occurred for a few hours Friday afternoon due to widespread severe weather, military training, and limited staffing in one area of the Jacksonville Air Route Traffic Control Center,” the FAA said in a Sunday statement.

“Some airlines continue to experience scheduling challenges due to aircraft and crews being out of place.”

Southwest said it was attempting to reposition aircraft and crews so that service could get back to normal.

The Southwest Airlines Pilots Association said in its own statement that although it was aware of “operational difficulties affecting Southwest Airlines” it could “say with confidence that our Pilots are not participating in any official or unofficial job actions.”

The union added: “Our Pilots will continue to overcome (Southwest) management’s poor planning, as well as any external operational challenges, and remain the most productive Pilots in the world.”

The Southwest Airlines Pilots Association, which on Tuesday said it was filing a temporary restraining order against the Dallas airline related to its August lawsuit over Covid-19 mandates.

Southwest says all of its employees must be vaccinated against Covid-19 by 8 December or face losing their job.

Funny how weather didn't impact the other carriers...sounds like whitewash under pressure from Brandon and his Vax pack jackals.

Brandon Goodwin of the Atlanta Hawks got blood clots from the Covid shot. It has ruined his career and put his life in danger.

Bidens administration is exempt from the vaccine! This is discrimination.

Southwest Airlines is keeping details under wraps until later in the new year, but here's what we know about its new fare product.
INDUSTRY・5 HOURS AGO
The Motley Fool

Positive commentary on demand and on the omicron variant has the sector taking flight.
ECONOMY・5 HOURS AGO
CBS News

New COVID-19 testing rules for anybody traveling to the United States went into effect Monday, sending Americans scrambling over the weekend to make sure they got tested on time to fly back into the country. In response to the spread of the Omicron variant, President Biden announced last week that...
PUBLIC HEALTH・1 DAY AGO

‘What’s going to happen next?’: Businesses brace for omicron

Gyms, concert venues, restaurants, airlines and other industries battered by the pandemic are bracing for another COVID-19 wave that could curb demand and prompt renewed restrictions.
PUBLIC HEALTH・2 DAYS AGO
MarketWatch

DALLAS — American Airlines CEO Doug Parker will retire in March and be replaced by its current president, Robert Isom, as the airline seeks to rebuild after massive losses caused by the pandemic. Parker, 60, has led Texas-based American since late 2013, when he engineered a merger with smaller...
AEROSPACE & DEFENSE・1 DAY AGO
Motley Fool

Why Airline Stocks Like Delta and United Were Grounded (Again) Today

After starting the day with a gain, shares of Delta Air Lines (NYSE:DAL), American Airlines Group (NASDAQ:AAL), and United Airlines Holdings (NASDAQ:UAL) all ended Wednesday's trading session firmly in the red. The first confirmed case of the omicron variant of COVID-19 in the U.S. prompted worry that new lockdowns and travel bans could be in the offing.
ECONOMY・7 DAYS AGO
BGR.com

Don't Miss: 150+ crazy Amazon Cyber Week deals that are ending today Right now, if I wanted to, I could book a flight this afternoon from my hometown here in Memphis and be in Chicago by this evening. One of the few concessions I would have to make in response to the ongoing COVID-19 pandemic, of course, is wearing a mask for the duration of that flight. However, in light of the worrisome new Omicron COVID-19 variant, potential new Biden administration travel restrictions could soon complicate the process of booking and taking that hypothetical flight. A reporter recently asked White House press...
U.S. POLITICS・6 DAYS AGO

COVID Cases Are Surging in the Five Most Vaccinated States

Vermont, the most-vaccinated state in America, saw an 18 percent rise in new daily COVID cases over the last 14 days before Wednesday.
PUBLIC HEALTH・13 DAYS AGO
Jalopnik

November 22 was just days ago, and according to the TSA, your airport woes this Thanksgiving most likely won’t be their fault as the agency reports 93 percent of the agency’s employees are in compliance with the vaccination mandate, according to Forbes, who reached out to the agency. That 93 percent includes employees who have received an exemption.
PUBLIC HEALTH・14 DAYS AGO
WGAU

WASHINGTON — Federal officials are levying fines of more than $160,000 against eight airline passengers because of incidents involving alcohol. The largest proposed single fine, more than $40,000, involves a passenger who is accused of drinking alcohol they brought on the plane, smoking marijuana in the plane’s lavatory, and assaulting a Southwest Airlines flight attendant, the Associated Press reported. When that flight from San Jose, California, landed in San Diego, the passenger was removed and charged.
PUBLIC SAFETY・15 DAYS AGO
Best Life

As the busy holiday season continues, travelers in the U.S. are getting back to the skies after a major dip in air travel during the height of the COVID pandemic. More than two million people traveled through airports the weekend before Thanksgiving, and more than one million are still traveling now—an increase from the 500,000 to 800,000 travelers seen during this time last year, according to the Transportation Security Administration (TSA). But heightened demand is happening alongside flight cancellations and cuts. United Airlines, Frontier, and American Airlines have all announced in recent months that they would be dropping flights next year. And now, Delta Air Lines is making some cancellations as well. Read on to find out what flights are being cut by this carrier for the next two months.
LIFESTYLE・7 HOURS AGO

FILE PHOTO: American Airlines flight 718, the first U.S. Boeing 737 MAX commercial flight since regulators lifted a 20-month grounding in November, lands at LaGuardia airport in New York, U.S. December 29, 2020. REUTERS/Eduardo Munoz/File Photo. News and research before you hear about it on CNBC and others. Claim your...
AEROSPACE & DEFENSE・1 DAY AGO
Entrepreneur

Southwest Airlines Puts Winter Flights on Sale From $39 Through December

Southwest Airlines is making it easier for people to give themselves and others the gift of travel this holiday season by putting winter flights on sale from as low as $39 one-way this December. Travelers have until 11:59 p.m. CT on December 30, 2021, to book the discounted seats. Deals...
LIFESTYLE・1 DAY AGO
The Independent

More than 40 people in the U.S. have been found to be infected with the omicront variant so far, and more than three-quarters of them had been vaccinated, the chief of the CDC said Wednesday. But she said nearly all of them were only mildly ill.In an interview with the Associated Press, Dr. Rochelle Walensky, director of the Centers for Disease Control and Prevention, said the data is very limited and the agency is working on a more detailed analysis of what the new mutant form of the coronavirus might hold for the U.S.But “the disease is mild” in...
SCIENCE・3 HOURS AGO
The Independent

The father of an autistic four-year-old says he and his son have been “banned for life” by a US airline after he tried to prove his son was medically exempt from wearing a mask on flights.Michael Seklecki told Fox News that his son was blocked twice from boarding flights with Frontier and Spirit Airlines even though he had doctor’s notes about a medical exemption for his son.He says that the ongoing mask exemption row has resulted in Frontier Airlines banning the pair from all flights."He’s been banned for life on Frontier Airlines… I was specifically banned as well," Mr...
TRAVEL・9 HOURS AGO
WCIA

A rush of vaccine-seeking customers and staff shortages are squeezing drugstores around the U.S., leading to frazzled workers and temporary pharmacy closures.
INDUSTRY・1 DAY AGO
Best Life

This Is the Worst Airline in the U.S., New Data Shows

Anyone who's traveled by air in recent years knows the indignity of the modern flying experience. You'll often find steerage-like conditions, long lines at the airport, oversold flights, and an à la carte model that strips some airline ticket holders of even the most basic conveniences in the name of shaving a few dollars off the cost. (Since when did a carry-on bag become a luxury?) And all of that was the case before the pandemic, which has spiked incidences of violence in the skies and added a new dimension of tension and incivility. But which airline do travelers consider to be the worst?
LIFESTYLE・2 DAYS AGO
USA TODAY

The Daily Money: Pandemic highlights the need to help the 'unbanked'