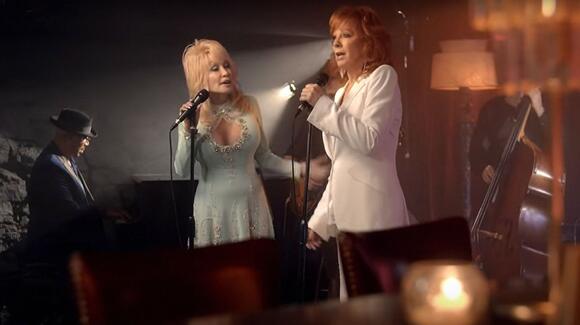 For the first time since it hit No. 1 in 1993, Reba McEntire's "Does He Love You" is back on the country charts. This time, Dolly Parton steps in for Linda Davis on a new version recorded for McEntire's "Revived Remixed Revisited" set.

McEntire's had hits with Vince Gill, Brooks & Dunn and even recorded an entire album of duets. But she somehow has never managed to collaborate with Parton.

"It's amazing that we've never done a duet," McEntire recently told reporters. "We've never [sung] together. I've gone on programs to sing for her, and she's done that for me. But to never sing a song together is kinda weird."

The original "Does He Love You" video may be iconic, but the duo teamed up to shoot a new one that's equally intense.

"My favorite part ... was getting to visit with her in between," McEntire shared. "Second was singing with her. But to get to hang out and just visit like girlfriends was so much fun."

"But I love the acting," she added. "We got to play act like we were women at odds and not liking each other. And by the end we're like, 'Ah, you can have him! Thunder, I don't want him!'"

While this may be the first time McEntire and Parton have recorded together, they're hoping it won't be the last.

"We did talk about doing more stuff together," McEntire said. "And I hope that happens because I'd love to work with her. She's a professional, she's fun, she's funny, she's witty. I can [sit] and listen to her talk all day long."

For now, McEntire "can't wait" for the chance to stage the duet live with Parton.

"I think that would be so much fun," she said. "I think the fans would love it, eat it up."

Miranda Lambert is excited to open the 2021 CMA Awards for reasons both obvious and not. The 55th Annual CMA Awards also falls on her birthday — a birthday that promises to get rowdy if one of her newest friends has her way. "I can't tell you much, other than...
MUSIC・20 DAYS AGO
Outsider.com

With Thanksgiving just around the corner, Dolly Parton has graced the world with a must-try milk gravy recipe. In a 2020 interview for Marie Claire, Dolly Parton opened up about her breakfast go-to dishes, sharing, “Well, this morning I made breakfast for my husband and me[…] I made some sausage patties, and I baked some biscuits, and I made some milk gravy. He likes that once in a while. Now, I can’t eat like that all the time, but I enjoy eating it when I do.”
CELEBRITIES・7 DAYS AGO
USA TODAY

Team Blake Shelton's Wendy Moten had an additional obstacle to overcome Monday after breaking her elbow and wrist. But she didn't let it stop her.
CELEBRITIES・1 DAY AGO
People

Reba McEntire is expanding her empire with her very own music venue featuring tasty treats. The country superstar, 66, announced the creation of Reba's Place, her own restaurant, bar, and live entertainment venue in Atoka, Oklahoma. McEntire shared the exciting news during her Friday show at the Choctaw Grand Theater in Durant, Oklahoma.
ATOKA, OK・3 DAYS AGO

So good together: Reba McEntire and a new restaurant. The country music star, 66, announced the creation of Reba’s Place, a restaurant, bar and live entertainment venue in Atoka, Oklahoma, People reported. McEntire, who was born in Oklahoma, made the announcement Friday at the Choctaw Grand Theater in Durant, Oklahoma...
OKLAHOMA STATE・3 DAYS AGO
WNCY

Welcome to Reba’s Place, a new bar, restaurant and live music venue curated in honor of the country legend herself, Reba McEntire. Housed inside a 100-year-old Masonic Temple in Reba’s home state of Oklahoma will be a two-story restaurant, bar, live music venue and retail store. Reba’s Place will regularly feature live music shows, along with a personalized menu that boasts a “Fancy” steak, named after her signature hit, her favorite dish, pinto beans and corn bread, along with street tacos, chicken fried steak and more.
RESTAURANTS・1 DAY AGO
Wide Open Country

Dolly Parton isn't just the queen of country music; she's the queen of having a thankful and generous heart. Between her contributions to the COVID-19 vaccine, Dolly's Imagination Library and Dolly Parton's My People Fund, we can barely keep up with how much she gives back to her communities. Here's...
CHARITIES・6 DAYS AGO
Outsider.com

I don’t know about you, but I’ve never met anyone who dislikes Dolly Parton. At this point, she’s so much more than a country music icon and skillful songwriter. Dolly is a philanthropist, an actress, an author, a style icon, and so much more. Her fashion sense, almost as much as her music, has set her apart for decades. Dolly’s style is big, bright, and eye-catching. American Pickers fans already know that Danielle Colby can get on board with that. So, they weren’t surprised to see Dani share one of Dolly’s posts on her Instagram stories.
BEAUTY & FASHION・7 DAYS AGO

Dolly Parton’s Got a Crush on Jimmy Fallon: ‘There’s Something About Late-Night People’

As a genre-transcending country superstar, actor and businesswoman, Dolly Parton's gotten to meet all kinds of different people over the course of her life. But she says there's something special about the hosts of late-night talk shows — and in particular, Jimmy Fallon. "Well, I have a crush on Jimmy...
CELEBRITIES・3 DAYS AGO
nashvillegab.com

For the first time ever, Dolly Parton’s concert film “Live From London” will be available for streaming starting November 1 exclusively on Peacock (via Time Life). Fans will be able view performances of her biggest hits and enjoy Parton’s endearing onstage banter that was filmed at the O2 Arena in 2008. The concert was previously only available on DVD and CD formats.
MUSIC・11 DAYS AGO
Outsider.com

After last week’s fall on stage, The Voice contestant Wendy Moten proved that nothing can keep her down. Even with a busted elbow and fractured wrist, Moten stood tall during her performance of Dolly Parton’s hit “Jolene,” further assuring Team Blake that she belonged in the Top 10. Moten appeared...
CELEBRITIES・1 DAY AGO
Audacy

Professing her love for Christmas movies, admitting she watches them “all year long if I can find one.” Reba McEntire knows just the right ingredients to make a holiday season production of her very own.
MOVIES・6 DAYS AGO

Kids in Farmville, Buckingham and Prince Edward can now receive a free book every month until the age of five thanks to a new partnership between the Central Virginia Regional Library (CVRL) and Dolly Parton’s Imagination Library. Country music superstar Dolly Parton, inspired by her father’s inability to read and...
FARMVILLE, VA・6 DAYS AGO
973rivercountry.com

Reba McEntire Is Thankful For Many Things This Year

Reba McEntire has a lot to be thankful for on Thanksgiving, and the rest of the year too, “Omigosh I wake up in the morning grateful that I’m alive, I can breathe, I can move, I can get out of bed on my own. (I’m) very grateful for the lifestyle that I have and if anybody needs help, please Lord please, direct me in what you want me to do. Just grateful for getting Rex in my life and Riddler, my family being healthy and happy, my friends being healthy and happy. I’ve got a great job and people I love and get to work with, and I’ve got a huge faith. So, no matter what happens to me, I know where I’m going, so I’m a happy camper.”
CELEBRITIES・5 DAYS AGO
themusicuniverse.com

New entertainment and restaurant space opens in late 2022. Reba McEntire is opening her own combination restaurant, bar, live music venue and retail store called Reba’s Place in late 2022. The new dining and entertainment venue will open at 319 East Court St, Atoka, OK 74525, in partnership with Choctaw Nation of Oklahoma and the City of Atoka.
DURANT, OK・4 DAYS AGO
The Boot

It’s no doubt that Team Blake's Wendy Moten has, so far, impressed coaches on The Voice with her performances. Fans have watched her turn out a number of difficult songs, including two by none other than powerhouse icon Aretha Franklin. But on Monday night (Nov. 29), the Tennessee native took her talent to the next level, singing a country cover of Dolly Parton’s fan-favorite, “Jolene.”
MUSIC・1 DAY AGO
Mashed

What We Know About Reba McEntire's New Restaurant

Residents of Atoka, Oklahoma, can look forward to dining at a new establishment in their city next year. Not only will the city's upcoming restaurant feature a bar and live entertainment, but it will also be owned and named for country music legend and actress Reba McEntire. According to People, McEntire invited Chief Gary Batton of Choctaw Nation onstage to break the exciting news about the new restaurant during a recent show she was playing in the Choctaw Grand Theater in Durant, Oklahoma.
DURANT, OK・1 DAY AGO
TODAY.com

It’s not your typical karaoke night when Ariana Grande and Kelly Clarkson are at the mic!. The two singers channeled their fellow pop divas in a clip from Jimmy Fallon’s upcoming NBC musical variety show, “That’s My Jam.”. Facing off in a round of “Mixtape Medley,” Grande and Clarkson took...
CELEBRITIES・18 HOURS AGO
Hello Magazine

Carrie Underwood is counting down the days to something special – and we can't wait!

Carrie Underwood has something very exciting to look forward to in just a few days, and neither she or her fans can wait. The country singer took to Instagram over the weekend to post a countdown ahead of her Las Vegas residency, alongside a behind-the-scenes video. In the caption, the...
CELEBRITIES・1 DAY AGO