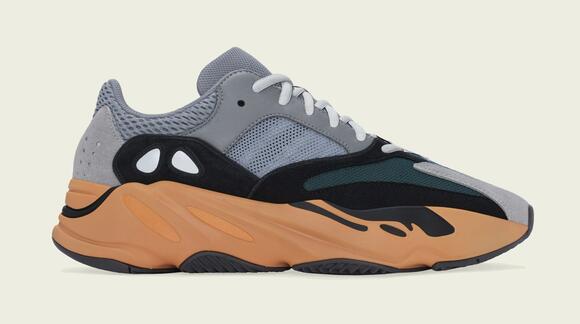 The Adidas Yeezy releases have been an abundance this season but there are still a few more drops that fans can look forward to.

The German sportswear giant confirmed today on Twitter that the Kanye West-designed Yeezy Boost 700 will hit shelves in a new “Wash Orange” makeup before week’s end.

The look of the upper is executed in a color scheme that’s similar to the silhouette’s coveted “Wave Runner” makeup but replaces the light gray tones with dark gray and is combined with black suede overlay panels while green and blue hues appear at the forefoot. Adding to the lateral look are gray shoelaces, a vibrant orange Boost-cushioned midsole, and a black rubber outsole.

The Adidas Yeezy Boost 700 “Wash Orange” will be released this Saturday at 11 a.m. ET via the Confirmed app in North America and Europe as well as a release on the Adidas app in select countries around the globe. The shoe will come with a $240 price tag.

Ronnie Fieg is back with another must-have Asics collaboration just in time for Black Friday. As Kith continues its 10th anniversary celebration, Fieg will deliver new iterations of the classic Asics Gel-Lyte 5 silhouette for the first time since 2015. This time around, Fieg is bringing back iconic colorways he introduced a decade earlier with the opening of his Manhattan & Brooklyn stores on the athletic brand’s Gel-Lyte 3 sneaker: “Salmon Toe” and “Leatherback.” For the latest collaboration, Fieg executed the Gel-Lyte 5 with pigskin suede uppers in the famed “Salmon Toe” and “Leatherback” color-blocking. The shoes also feature the 10-year “KXTH”...
BEAUTY & FASHION・5 DAYS AGO
Footwear News

Fans of both “South Park” and Adidas have plenty to be excited about as images of new sneaker collabs have emerged. After images have surfaced of the Stan Smith “Stan Marsh” last week, two more collaborative styles between the athletic giant and the popular TV show appear to be making their way to sneaker shelves soon in the form of the Superstar “Kyle Broflovski” and the NMD_R1 “Kenny McCormick” makeups. The first shoe draws inspiration from the character Kyle Broflovski and his signature ensemble as the upper dons a green leather upper that’s coupled with hairy overlay panels including on the Three...
APPAREL・4 DAYS AGO
Footwear News

Supreme has tapped Vans once again to deliver a new sneaker collection that’s arriving just in time for the holidays. After giving the Skate Grosso Mid and Skate Era new looks in the spring, the legendary skatewear-turned-streetwear label and the Cali-based footwear brand joined forces in fall ’21 to refresh the classic Old Skool and Half Cab silhouettes. This latest Supreme x Vans collection will include seven different styles to choose from including four colorways of the Half Cab and three iterations of the Old Skool. The first model is dressed in either tonal maroon, blue, black or white suede upper that’s contrasted...
APPAREL・5 DAYS AGO
hotnewhiphop.com

Kanye West's dad shoe wave has been one for the history books as it began in 2017 and is still going strong in 2021. The AdidasYeezy Boost 700 family of sneakers has led that charge and the MNVN iteration is one that has polarized fans. The shoe is the same shape as the 700 we all know and love, however, the big difference is the materials as well as the pattern on the upper which simply says "700" in big 3M lettering.
APPAREL・9 DAYS AGO

As we come closer and closer to the end of the year, we continue to check off release after release. This week, Converse, Jordan Brand, and adidas have a lot to share, including both previously revealed GRs and newly debuted collaborations. First, Rick Owens kicks things off with his DRKSHDW...
APPAREL・14 DAYS AGO
Footwear News

Adidas and Noah Clothing have a new collaboration dropping soon. After delivering a summer-ready capsule in June, the German sportswear giant and the New York-based label have joined forces to deliver a new apparel and footwear collection for this year’s fall and winter seasons. According to Noah Clothing, the label set out to create a functional, yet wearable capsule that blurs the line between performance and lifestyle for its pieces. The Noah Clothing x Adidas collab is centered around the release of the new low-cut Lab Race and Vintage Runner silhouettes with each pair dropping in two colorways. The first pair is...
DESIGNERS & COLLECTIONS・13 DAYS AGO
hypebeast.com

To make up for their lackluster start to the year, adidas Yeezy is ending 2021 with a deafening bang. Alongside their upcoming 700s and 500s is another appearance from the Yeezy Quantum, which is to release on November 27th in “Amber Tint.”. Despite the change in colorway, the pair is...
APPAREL・11 DAYS AGO

A new iteration of Kanye West’s acclaimed Yeezy Foam Runner is reportedly coming soon. According to the latest post from Yeezy Mafia on Instagram, the Yeezy foam clog will hit stores in the “Mx Sand Grey” makeup next month. Although an early look at the pair has yet to surface, the Yeezy insider shared mock-up images of the style to give sneaker fans an idea of what’s expected to release. The images show that the Yeezy Foam Runner “Mx Sand Grey” will feature a predominantly two-tone brown and gray upper that’s covered with dark brown and neon pink accents throughout the entirety...
APPAREL・13 DAYS AGO
hypebeast.com

This Fall and Winter, Kanye West and his team over at will be engineering plenty of new YEEZY offerings for you to spruce up your holiday rotation. One of the offerings that both parties have lined up is the adidas YEEZY QNTM “Amber Tint”, and it hast just been unveiled by way of detailed in-hand imagery.
DESIGNERS & COLLECTIONS・11 DAYS AGO
sneakernews.com

In adidas Yeezy‘s case, the days leading up to Black Friday are just as important as the day itself. And the weekend prior to the shopping event, we’re to see the Yeezy 500 kick things off in its “Ash Grey” colorway. At a glance, the pair bears a passing resemblance...
BEAUTY & FASHION・11 DAYS AGO
sneakernews.com

Unlike the model it builds atop, the Yeezy Boost 700 MNVN gradually waned in interest. This only became more apparent with the debut of new silhouettes like the Foam Runner, NSLTD BOOT, and the KNIT RNR. But come 2022, we will finally see the shoe make another return, kicking off the year in a Spring-ready “Resin” colorway.
APPAREL・9 DAYS AGO

Fresh off the “Honey Flux” release in September, it appears that there’s another iteration of the Adidas Yeezy Boost 700 MNVN coming soon. According to Yeezy Mafia, a new “Resin” Yeezy Boost 700 MNVN is expected to hit shelves in February 2022. While early images of the shoe have yet to surface, the mockup rendering from the Yeezy insider reveals that the Christian Tresser and Steven Smith-designed lifestyle runner will be donning a light green nylon upper that’s offset by metallic silver “700” branding on the lateral side. Like previous iterations, black overlay panels appear at the forefoot and heel counter as well as an all-black Boost-cushioned midsole underneath.
APPAREL・9 DAYS AGO
sneakernews.com

In the five years since the adidas Yeezy Boost 350 v2‘s debut, the silhouette has appeared in too many iconic colorways to count. And one of these, the “Beluga,” will be returning in an all-new reflective variant next month. As it appeared in 2016, the shoe’s return is marked by...
APPAREL・10 DAYS AGO
hotnewhiphop.com

Kanye West's dad shoe revolution began all the way back in 2017 as he unleashed the Adidas Yeezy Boost 700 "Wave Runner" onto the world. After some initial pushback to the design, the "Wave Runner" became a beloved colorway amongst fans and Yeezy Boost 700 silhouette itself became the stuff of legend. For the past four years now, the shoe has continued to receive new colorways, and fans are always eager to get their hands on some pairs when they can.
APPAREL・6 DAYS AGO
hypebeast.com

Kanye West has been signed with the family for six years now and if there’s anything that we’ve learned in terms of his release methods, it’s that both parties have a penchant for keeping things interesting. At any given moment, Ye and his team could unveil a new colorway, restock an old iteration, conduct a regional exclusive launch or even surprise drop a new silhouette, and the latter just occurred for his all-new adidas YEEZY BSKTBL KNIT “Slate Blue.”
APPAREL・6 DAYS AGO
hypebeast.com

Expansion has been the key for Kanye West and his team at adidas in 2021 as this year has brought about several new YEEZY silhouettes to fruition. A handful of them are gearing up to make their debut during the holidays, one being the adidas YZY BOOST 350 V2 CMPCT in a “Slate Blue” colorway. The kicks first surfaced back October, but now we have a detailed and exclusive look at the kicks.
APPAREL・6 DAYS AGO
hypebeast.com

The ‘ YEEZY BOOST 350 V2 “Blue Tint” is set for a restock in December. Originally debuted in December 2017, the “Blue Tint” colorway is known for its winter-ready layout highlighted with accents of turquoise on the collar and midsoles. Boasting a wavy grey and blue-grey pattern, this YEEZY iteration...
LIFESTYLE・4 DAYS AGO
SneakerFiles

Beyonce and her Ivy Park line will debut another collaboration with adidas Originals. Launching in December, we have the Ultra Boost OG highlighted in ‘Electric Green.’. This adidas Ultra Boost is sure to turn some heads as it comes dressed in a Bright shade of Green. Constructed with Primeknit, the same shade adorns the lace cage and heel counter. Next, a special leather patch lands on the tongue, co-branding hits the insoles, and they come with hiking-inspired laces. Lastly, we have a Boost midsole and a Continental rubber outsole.
APPAREL・4 DAYS AGO
Footwear News

Let’s cut to the chase — time is ticking. Black Friday is here, and each year it never fails to be a top-profit day for retailers across the nation. Sure, it attracts the rush of shoppers who want to get ahead of holiday gifting. But perhaps more importantly, it’s the weekend where you can score some of the best deals of the entire year. Whether you’re looking for a new home appliance, the best clothing deals, a 4K TV or generally seeking the best gifts for women or men, you’re bound to score more for way less. Included in the...
SHOPPING・4 DAYS AGO