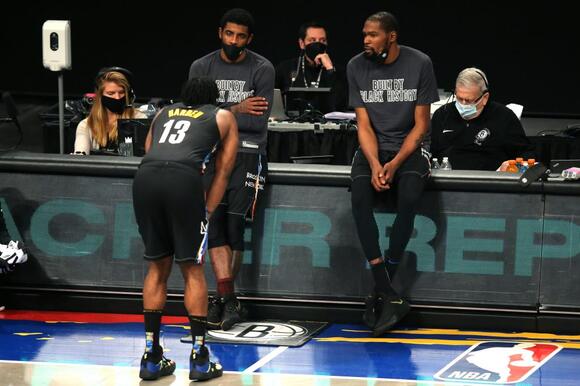 The Brooklyn Nets will tip-off the 2021-’22 NBA season on Oct. 19 and with just a week remaining before the action begins, stars Kevin Durant and James Harden are set to have major involvement regarding the status of Kyrie Irving.

Irving is currently ineligible to play home games at the Barclays Center due to the proof of vaccination requirements. After the team and players insisted for weeks that everything would work itself out and the All-Star point guard would play, the reality is settling in for the Nets.

Speaking to reporters Sunday, head coach Steve Nash acknowledged that Irving won’t be allowed to play home games this year. Now, prominent members of the organization are preparing to discuss Irving’s status for the entire season and his future with the team.

NBA insider Adrian Wojnarowski reported Monday, via NetsDaily’s Alec Sturm , that stars Kevin Durant and James Harden will meet with team governor Joe Tsai and general manager Sean Marks to weigh the current situation. All four will be involved in deciding whether Irving is allowed to be a part-time player. Furthermore, per ESPN, “a lot is riding” on Irving’s short- and long-term future. 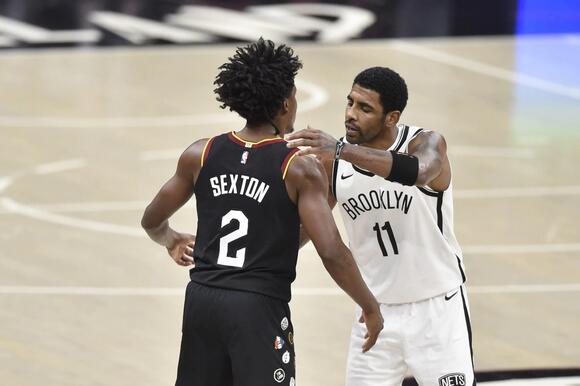 Brooklyn finds itself in a no-win situation if Irving refuses to receive the COVID-19 vaccination. While he received clearance to practice with the team , he has already missed one home preseason game due to the mandate and would miss 41 regular-season home contests if he stands firm in his decision.

Brooklyn could try to explore a trade, but that comes with its own complications. Reports have circulated for months that the 29-year-old is willing to retire if he is moved to another team. It’s one of many reasons why he has “virtually zero” trade value around the league.

Irving also has a very close relationship with Durant and is responsible for convincing him to play in Brooklyn. Trading him away, even if it might be in the franchise’s best interest this season, could result in Durant being less happy with the Nets. 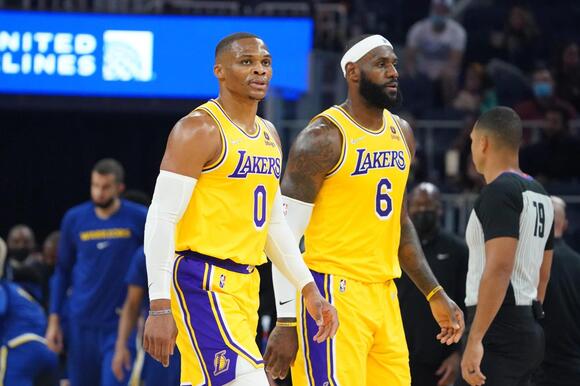 But if a trade doesn’t happen, the consensus favorite to win the championship this season loses its star point guard for half the regular season and wouldn’t have him for a significant stretch of the NBA Playoffs.

The Nets kept hoping this issue would resolve itself, but they are running out of time. While Irving would be eligible to play in the opener on the road against the Milwaukee Bucks, Brooklyn plays at home on Oct. 24.

The Golden State Warriors crushed the Brooklyn Nets 117-99 on Tuesday night to improve to a 12-2 record, which is the best in the NBA. Meanwhile, the Nets fell to 10-5, (but they did rebound on Wednesday night beating the Cleveland Cavaliers 109-99 to improve to 11-5). Kevin Durant was...
NBA・8 DAYS AGO
Yardbarker

The Brooklyn Nets are 8-4 on the season, but have been without their seven-time All-Star guard Irving. He is not eligible to play at Barclays Center in Brooklyn, New York, due to the city's mandate for vaccines. Technically, Irving could be a part-time player and play in all of their...
NBA・14 DAYS AGO
Santa Clarita Radio

ESPN’s Stephen A. Smith Says Kevin Durant Should Ask To Be Traded After Being “Betrayed” By Kyrie Irving

Popular and controversial ESPN sports analyst Stephen A. Smith has urged Kevin Durant to seek out a trade with claims he has been betrayed by Kyrie Irving. Irving hasn’t been active this season as he’s opted not to get vaccinated and Smith has been pretty vocal over the issue these last few weeks. Vaccination is, of course, a personal choice yet the ESPN personality says Kyrie owes it to Durant as the former was the one who got KD to join the Brooklyn Nets.
NBA・3 DAYS AGO
The Big Lead

The Golden State Warriors came into Brooklyn and clowned the Nets last night. Stephen Curry laced up his sneakers and delighted in draining nine three-pointers in the blowout. Kyrie Irving was, once again, not present due to Reasons. A growing conversation about Kevin Durant having buyer's remorse in the running mate department grew a bit louder because how could it not? One elite guard is slightly less complicated and mercurial than the other. One elite guard is always available while the other can be off on a personal vision quest at any given moment.
NBA・9 DAYS AGO

This Clippers-Nets Trade Is Headlined By Kyrie Irving To L.A.

After some shaky performances at the beginning of the 2021-22 NBA season, the Brooklyn Nets have started finding their footing. The team is now 12-5, tied with the Chicago Bulls for the best record in the Eastern Conference, after winning 10 out of their last 12 games. Kevin Durant is...
NBA・4 DAYS AGO
fadeawayworld.net

When LeBron James left the Cleveland Cavaliers for the second time and joined the Los Angeles Lakers in the summer of 2018, not much changed. He wasn't considered a menace for the Western Conference, as the Lakers only won two more games than the previous season, which meant LeBron failed to make the playoff for the third time in his career.
NBA・23 HOURS AGO
FastBreak on FanNation

Ja Morant of the Memphis Grizzlies sent out a tweet on Sunday.
NBA・12 DAYS AGO
fadeawayworld.net

Kevin Durant And James Harden Comment After The Nets-Warriors Game: "It's Only Going To Get Better From Here."

The Brooklyn Nets have recently lost to the Golden State Warriors by getting beat 117-99. There's no doubt that the Brooklyn Nets have to improve, and while they are obviously a good team, there's clearly work that needs to be done. Kevin Durant spoke after the game and claimed that...
NBA・10 DAYS AGO

The Brooklyn Nets are begun finding their footing without starting point guard, Kyrie Irving. Irving is not eligible to play NBA games in New York City, meaning he cannot participate in Barclays Center or Madison Square Garden, because he has not yet received his COVID-19 vaccination. Until he does that,...
NBA・11 DAYS AGO
netsdaily.com

It wasn’t easy in the Big Easy. Brooklyn escaped New Orleans, defeating the Pelicans, 120-112. With the victory, the Nets have won seven of their last eight games and improved to 9-4 on the young season. Although it’s a win in the record column, it won’t be one the Nets...
NBA・14 DAYS AGO
thefocus.news

During the recent Nets vs Warriors game, TV cameras captured Kevin Durant and James Harden’s priceless reaction to Steph Curry hitting a logo 3. Tuesday’s matchup between the Brooklyn Nets and Golden State Warriors was arguably the most anticipated game of the season. Many believed it was a preview of...
NBA・10 DAYS AGO
WFAN Sports Radio

What do teams do when James Harden and Kevin Durant are in a groove? 'Pray'

What can opposing defenses do when the Nets’ dynamic duo of James Harden and Kevin Durant are playing to their superstar levels, like they did on Friday? “Pray.”
NBA・13 DAYS AGO

The Brooklyn Nets were missing several key players on Tuesday night, and they couldn’t keep up with the league’s best team, falling to the Golden State Warriors 117-99. Stephen Curry (37 PTS, 7 REBS) shooting lights out from the field only added insult to injury. In only 29 minutes, he went 12-of-19 from the field and was easily Brooklyn’s biggest problem. Although the Nets were able to get off nine more shots than the Warriors, their efficiency was atrocious, shooting it at only 39%.
NBA・10 DAYS AGO
FanSided

The Brooklyn Nets schedule allows for Kevin Durant to get to play both of his former teams in back-to-back games. To start things out, Durant and James Harden traveled to Oklahoma City to take on the Thunder for the first time together since they left the franchise that drafted them. The two played side by side in OKC from 2009-2012 before Harden was traded to Houston prior to the start of the 2012-13 season.
NBA・11 DAYS AGO
USA TODAY

Steph Curry scored 37 points and easily won the matchup of the NBA's top two scorers when Kevin Durant had his worst game of the season.
NBA・10 DAYS AGO
FastBreak on FanNation

Steve Nash spoke about Kyrie Irving before the Nets lost to the Golden State Warriors in Brooklyn on Tuesday night.
NBA・10 DAYS AGO
fadeawayworld.net

Despite not having Kyrie Irving on the court, the Brooklyn Nets are doing just fine without the controversial point guard. After a 1-2 start to the season, they now boast an 8-4 record, ranking 2nd in the stacked Eastern Conference. The Beard and KD are doing a great job leading...
NBA・14 DAYS AGO
basketball-addict.com

Despite an up-and-down start to their campaign, the Brooklyn Nets are still considered as the favorites to go all the way and win the championship this season. This is thanks in large part to the dominance of James Harden and Kevin Durant who for the most part, have been nothing short of outstanding early on. […] The post Nets news: James Harden reveals the only way opposing teams can stop Kevin Durant appeared first on ClutchPoints.
NBA・13 DAYS AGO
FastBreak on FanNation

Giannis Antetokounmpo of the Milwaukee Bucks was interviewed by GQ magazine, and one of the things he talked about was his relationship with James Harden of the Brooklyn Nets.
NBA・10 DAYS AGO
houstonmirror.com

The last time Stephen Curry opposed Kevin Durant in Brooklyn, N.Y., a national television audience was watching the former Golden State Warriors teammates. But the plotlines were much different. There were no fans in the building and James Harden was in his final weeks as a Houston Rocket. Harden is...
NBA・11 DAYS AGO