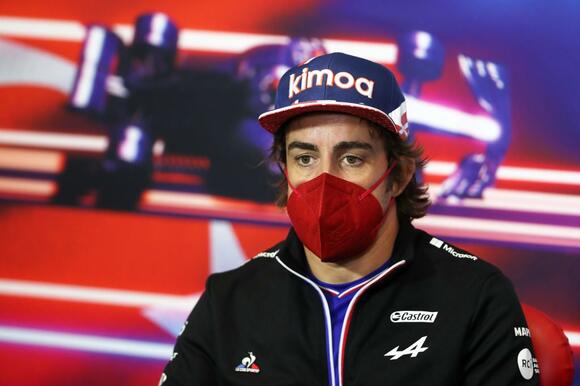 Max Verstappen is back in the lead for the championship in the Formula One drivers’ standings, but he shouldn’t expect any help from another of Lewis Hamilton ’s old rivals.

Long before the Dutchman and the Brit began their own story fighting for honours, two-time championship winner Fernando Alonso was battling it out with the Mercedes man and the pair were suggested to still not see eye to eye by Helmut Marko, the Red Bull advisor.

“We know Alonso is not a big Hamilton fan, which we saw in Budapest,” he’s reported as saying. But although he saw the suggestion, Alonso isn’t focused on anything other than his own performance level and rejected the notion he would try to help Verstappen edge out Hamilton across the season - despite holding off the reigning champion in the Hungarian Grand Prix.

“I read that, but I always run my own race,” the Spanish racer said .

“In Hungary, yes, we managed to fight Hamilton. But that was mainly due to the track. Mercedes and Red Bull are normally much too fast. Look at Monza, when Bottas started last and still finished on the podium.

“So of course, I like to fight with good drivers, but I think Red Bull really has to do it themselves this season.”

Mercedes still lead Red Bull in the constructors standings, however.

Lewis Hamilton claims he was utterly shocked after discovering the massive gap in qualifying to Max Verstappen at the F1 Qatar Grand Prix. Heading into the Qatar GP, Verstappen only led Hamilton by 19 points—which means Hamilton is definitely within striking range. A race win for either driver would mean massive implications in the next races as the F1 season comes to a close.
MOTORSPORTS・14 DAYS AGO
Insider

Lewis Hamilton has gone from seemingly without a hope to the man in pole position to secure this season's drivers world championship.
MERCEDES, TX・13 DAYS AGO
FanSided

Formula 1: Why the tiebreaker battle is completely meaningless

Max Verstappen hasn’t officially clinched the tiebreaker over Lewis Hamilton in the 2021 Formula 1 season, but the battle for that tiebreaker is completely meaningless. With two races remaining in the 2021 Formula 1 world championship battle, Red Bull’s Max Verstappen leads Mercedes’ Lewis Hamilton by just eight points. The...
NFL・14 HOURS AGO
SkySports

After eight months of drama, unpredictability and increasing tension, 2021's world champion will either be crowned at this week's inaugural Saudi Arabian GP - where Verstappen could clinch his maiden crown if Hamilton endures a difficult weekend - or at next week's season finale in Abu Dhabi in what could prove a winner-takes-all showdown.
MOTORSPORTS・6 DAYS AGO

Mercedes chief Toto Wolff is ready to unleash the incredible engine that helped Lewis Hamilton power to a supreme victory at the Sao Paulo Grand Prix eight days ago. Hamilton was given a new engine for the race in Brazil, which with a focus on performance rather than reliability enabled him to come from last place in the Saturday sprint qualifying race to first in the grand prix after passing chief title rival Max Verstappen.
MOTORSPORTS・13 DAYS AGO
The Independent

Sergio Perez has said he is willing to focus on helping Max Verstappen win this year’s Formula 1 championship, as the season approaches its final two races.Perez’s Red Bull teammate has an eight-point lead over Lewis Hamilton ahead of the Saudi Arabian and Abu Dhabi Grands Prix, with Hamilton having won the last two races to narrow the gap to Verstappen at the top of the drivers’ standings.And Perez, who is in fourth place, has said he understands that the priority for Red Bull is ensuring Verstappen seals his first F1 title.“It’s part of the game; Max is the...
MOTORSPORTS・9 DAYS AGO
The Independent

What does Max Verstappen need to do to win the F1 title this weekend?

Max Verstappen has the chance to win his maiden Formula One drivers’ title in Saudi Arabia this weekend.While Lewis Hamilton’s back-to-back race wins mean the battle is likely to go down to next week’s finale in Abu Dhabi there are certain scenarios in which the Dutchman could put his rival out of reach with a race to spare.Here, we run through the permutations.Verstappen winsVerstappen leads Hamilton by eight points, 351.5 to 343.5, going into the weekend and, holding the tie-breaker on number of wins should they end up level, needs to score 18 points more than Hamilton in...
MOTORSPORTS・4 DAYS AGO
The Independent

Damon Hill believes it would “be sad for F1” if Lewis Hamilton and Max Verstappen’s fierce rivalry this season is settled by a crash.Verstappen leads Hamilton by eight points in the drivers’ standings but the Briton has won the last two races and is expected to have superior pace in the penultimate race of the season in Saudi Arabia this weekend.The pair have already collided twice this season, at Silverstone and Monza, before another incident in Brazil where Verstappen escaped punishment after forcing Hamilton off the track. Former world champion Hill hopes the battle for the championship can be...
MOTORSPORTS・3 DAYS AGO
The Independent

Lewis Hamilton has won the first ever Saudi Arabian Grand Prix, beating Formula 1 title rival Max Verstappen over the line after a chaotic race.Hamilton started on pole in Jeddah, with Red Bull’s Verstappen third. The pair traded positions throughout Sunday’s race, but ultimately the Mercedes man came out on top as Verstappen finished second. As such, defending champion Hamilton has wiped out the Belgian-Dutch driver’s eight-point lead, and the foes will enter the final race of the season level on points. Ahead of next weekend’s Abu Dhabi GP, Verstappen leads Hamilton on races won, having claimed nine victories...
MOTORSPORTS・7 HOURS AGO
The Independent

Lewis Hamilton is chasing down Max Verstappen at the top of the Formula 1 standings, just eight points behind after winning the Qatar Grand Prix - his second straight victory following a huge performance in Brazil.Just over a week remains until the next race, with the Saudi Arabia Grand Prix being the penultimate one of the season - then it’s off to Yas Marina in the United Arab Emirates. The long straights will unquestionably favour the Mercedes cars over those of Red Bull, especially with Toto Wolff revealing Hamilton will get his newest “spicy” engine back in the car...
MOTORSPORTS・6 DAYS AGO
The Independent

And so to Jeddah. In the north of the city tucked against the Red Sea coast is the home of the inaugural Saudi Arabian Grand Prix, dubbed the “fastest street circuit in the world”. The Jeddah Corniche Circuit was completed only last week after an intense eight-month building project, and FIA race director Michael Masi visited to give the track official approval. “The progress that I have seen on each of my visits over recent months has been remarkable,” Masi said. “Jeddah will provide an interesting new challenge for the drivers and teams.”“Interesting” is one word for it. Mercedes’ Valtteri...
WORLD・2 DAYS AGO
Yardbarker

Max Verstappen could wrap up the F1 Driver’s Championship in Saudi Arabia if things fall into place for him. The Red Bull driver needs to gain 18 points more than eight-time world champion and current holder Lewis Hamilton at this weekend’s race in order to win the World Driver’s Championship with a race to spare.
MOTORSPORTS・2 DAYS AGO
SkySports

Title leader Verstappen, in majestic form through 26 of the 27 tricky turns of Jeddah's new street track and on what Red Bull branded the "lap of the year", looked set to land a huge blow to rival Lewis Hamilton by taking pole position for 2021's penultimate race - before disaster struck.
MOTORSPORTS・1 DAY AGO
The Independent

Max Verstappen beat title rival Lewis Hamilton in the final practice session for Sunday’s inaugural Saudi Arabian Grand Prix as the reigning champion survived a near miss.The Red Bull of Verstappen leads the way in the standings, eight points clear of Hamilton with two races remaining, but this was the first time he had outpaced his Mercedes in a session in Jeddah.The Dutchman set a time of one minute 28.100 seconds, 0.214 secs faster than Hamilton in second place as the Brit aims for three successive wins with the title picture taking shape.Fastest in final practice 💪 Max finishes FP3...
MOTORSPORTS・1 DAY AGO
The Independent

Sir Lewis Hamilton: I had nothing to do with Grenfell deal

Sir Lewis Hamilton has said he had “nothing” to do with Mercedes’ F1 team’s partnership deal with Kingspan – an insulation firm linked to Grenfell Tower.Sir Lewis is competing with the team at the Saudi Arabian Grand Prix this weekend.Kingspan’s logo appeared on Sir Lewis’ car for the first time on Saturday.Speaking at a press conference after the qualifying session, Sir Lewis said the decision had “nothing” to do with him.“It is not something that I feel I have to speak about publicly”, he said.“I had nothing to do with the team signing any of the sponsors. Tommy (Hilfiger) was...
MOTORSPORTS・1 DAY AGO
AFP

Lewis Hamilton snatched pole position for the Saudi Arabian Grand Prix on Saturday as championship leader Max Verstappen smashed into a wall and could only manage third place. Verstappen's hopes were extinguished when his Red Bull speared into the barriers at the exit of the last bend on his final flying lap on the tight, unforgiving Jeddah street circuit just as he appeared poised to unseat his rival. "It was terrible," said a shaken but unhurt Verstappen. Hamilton's Mercedes teammate Valtteri Bottas was second and will share the front row on Sunday.
MOTORSPORTS・1 DAY AGO
The Independent

Red Bull team principal Christian Horner has suggested that Lewis Hamilton was “messing around” as the Mercedes driver collided with Max Verstappen at the Saudi Arabian Grand Prix.Hamilton and his Red Bull rival traded positions numerous times in one of the most chaotic races in Formula 1 history, before the Briton emerged victorious on Sunday.In doing so, the defending champion erased Verstappen’s drivers’ championship lead, and the pair will enter the final race of the season in Abu Dhabi level on points. The Belgian-Dutchman is ahead on races won, though he couldn’t beat Hamilton in Jeddah as the seven-time...
MOTORSPORTS・6 HOURS AGO
The Independent

The head of the Mercedes-AMG Petronas Formula One racing team apologized Friday for the way the team announced its partnership with a company involved in a London high-rise where a fire killed 72 people.The team announced a sponsorship deal this week allowing building products maker Kingspan to put its logo on the nose cone of world champion Lewis Hamilton’s car beginning with a weekend race in Saudi Arabia. Survivors and family members of the people who died in the 2017 Grenfell Tower fire immediately condemned the deal and asked the team to sever its ties with Kingspan. The fire...
MOTORSPORTS・2 DAYS AGO