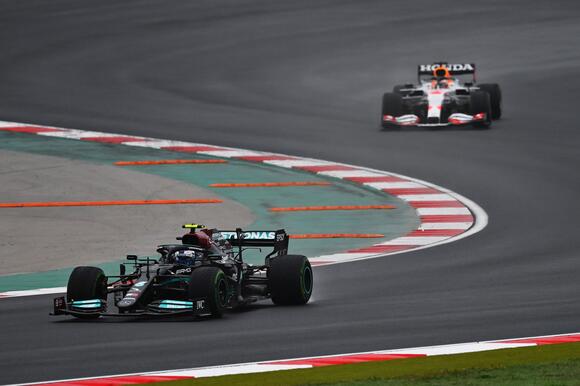 Max Verstappen says Red Bull must up their game to keep competing with Mercedes, after their rivals showed considerably more speed in the Turkish Grand Prix .

Valtteri Bottas won the race , with Verstappen and team-mate Sergio Perez occupying the other podium places and Lewis Hamilton in fifth after his penalty for a new engine left him halfway down the starting grid.

But after recent races whose locations favoured the Mercedes cars, Turkey provided an unwelcome surprise for Red Bull with how much quicker their major rivals’ cars were in some parts of the track.

“Of course overall I think we have been at tracks that naturally were a bit better for Mercedes but then this track was a bit unknown and clearly they were ahead of us,” said Verstappen to Sky.

“I do think we need to step it up a bit to be in the fight until the end of the season.

“Of course they’ve sorted their car out so it’s a bit more obvious that top speed they have. There’s not much we can do.

“It’s what we have to live with, it’s not going to magically disappear but of course we’ll try to minimise the damage on the straights.”

Red Bull boss Helmut Marko seems terrified of Lewis Hamilton’s engine advantage despite Max Verstappen’s lead in the F1 driver standings. After winning the Brazilian Grand Prix starting at P10, Hamilton completed a successful drive, but it is also a fact that he had a new engine. Via Express UK.
MOTORSPORTS・9 DAYS AGO
The Independent

Lewis Hamilton is now favourite to win the F1 drivers’ championship after winning the Qatar Grand Prix to close the gap to his title rival and current standings leaders Max Verstappen. The seven-time world champion is now within eight points of the Dutch driver, with two races to go, after an excellent drive that saw him dominate from start to finish after claiming pole position with a sublime qualifying performance.Verstappen did his best to limit the damage though, rising from seventh on the grid after a five-place penalty to finish second, while also salvaging his day further with a...
MOTORSPORTS・3 DAYS AGO
racingnews365.com

After being excluded from qualifying for a technical infringement, Hamilton recovered from 20th on the grid to finish fifth for Mercedes in the 24-lap sprint race at Interlagos, pulling off a number of passes at the end of the start-finish straight. The charge came following intrigue from Red Bull over...
MOTORSPORTS・12 DAYS AGO

The gloves are truly off between Mercedes and Red Bull

Nov 15 (Reuters) - Lewis Hamilton and Max Verstappen shook hands after the Sao Paulo Grand Prix but the gloves are now well and truly off between Formula One rivals Mercedes and Red Bull as the championship enters the final straight. As Hamilton celebrated his 101st win, and possibly the...
MOTORSPORTS・11 DAYS AGO
BBC

Mercedes have asked for a review of the decision not to penalise Red Bull's Max Verstappen for forcing Lewis Hamilton wide in the Sao Paulo Grand Prix. The incident on lap 48 of the race was "noted" by the stewards but no investigation was carried out. Mercedes have lodged a...
MOTORSPORTS・10 DAYS AGO
The Independent

Daniel Ricciardo admits there was “tension” between himself and Max Verstappen during their time as teammates at Red Bull.The Australian spent three years racing alongside the Dutch star, who leads the standings for this season’s drivers’ championship by 19 points over defending champion Lewis Hamilton. But Ricciardo enjoyed competing with Verstappen, hailing the 24-year-old for his unique personality.“For different reasons I guess, but Max Verstappen, because you get what you see,” Ricciardo said when asked in an interview with Ariel Helwani on his YouTube channel who he is most a fan of on the grid. “He might not be the...
MOTORSPORTS・14 DAYS AGO
newschain

Lewis Hamilton’s Mercedes team could call on Formula One’s stewards to reconsider their decision not to penalise Max Verstappen at the Brazilian Grand Prix. Hamilton won the Interlagos race following a superb comeback drive, but Verstappen escaped punishment for running his rival off the road as they duelled for first position.
MOTORSPORTS・11 DAYS AGO

Mercedes the 'underdogs' in fight against Red Bull

Valtteri Bottas reckons Red Bull are the favourites for the Qatar Grand Prix, given their form over the course of the 2021 season so far. Mercedes see themselves as the "underdogs" heading into this weekend's inaugural Qatar Grand Prix, according to Valtteri Bottas, as their close fight with Red Bull for both World Championships continues.
MOTORSPORTS・7 DAYS AGO
buckinghamshirelive.com

Mercedes chief Toto Wolff has slammed the decision not to hand Max Verstappen a penalty during the Sao Paulo Grand Prix. Lewis Hamilton started 11th on the grid, following a five-place grid penalty for a power unit change, but charged down his title rival in a thrilling drive. Hamilton was...
MERCEDES, TX・11 DAYS AGO
Telegraph

Toto Wolff has implied that Mercedes are being given unequal treatment by the stewards after Lewis Hamilton's exclusion from qualifying at the Brazilian GP. Mercedes boss Toto Wolff was left feeling angered by Lewis Hamilton's exclusion from qualifying in Brazil over a rear wing issue, pointing to recent car part changes that Red Bull have made under parc ferme conditions without penalty.
MERCEDES, TX・9 DAYS AGO

Tensions boil in Qatar between Mercedes and Red Bull

LOSAIL, Qatar (AP) — The most dramatic Formula One title fight in at least a decade further intensified Friday when Christian Horner and Toto Wolff traded barbs at the same time the FIA denied Mercedes’ right to appeal last week’s non-penalty on championship leader Max Verstappen. Wolff, the head of...
MOTORSPORTS・7 DAYS AGO
BBC

Formula 1 officials have rejected Mercedes' request for a review of Max Verstappen's driving during the Sao Paulo Grand Prix. Stewards in Brazil ruled that there was no investigation necessary after Verstappen appeared to force Lewis Hamilton's Mercedes wide. Governing body the FIA said Mercedes' appeal failed the test of...
MOTORSPORTS・7 DAYS AGO
newschain

Lewis Hamilton admits new camera angles of his run-in with title rival Max Verstappen at the Brazilian Grand Prix have changed his decision on the incident – but stopped short of calling for the Red Bull driver to be hit with a retrospective punishment. Hamilton took the chequered flag at...
MOTORSPORTS・8 DAYS AGO
ClutchPoints

Mercedes have filed a request for ‘Right of Review’ following the controversial clash between Max Verstappen and Lewis Hamilton on Lap 48 at the F1 Brazilian Grand Prix. The Sao Paulo GP was full of exhilarating action as Hamilton weaved his way through the field after having to incur several penalties over the race weekend. On Lap 48, Hamilton was finally close enough to make a move on Verstappen heading into turn 4 of the circuit.
MOTORSPORTS・9 DAYS AGO
firstsportz.com

“Gap Between Lewis Hamilton and Max Verstappen is above expectations”: Mercedes

Mercedes engineer Andrew Shovlin looks back at the ace driver of his team Lewis Hamilton securing pole and Finn driver Valtteri Bottas securing P3 finish in Qatar GP Qualifying session. With both drivers showing glimpses of their speed since the beginning of Day 2, the duo managed to secure another top 3 finish to solidify the position of their team against Red Bull.
MOTORSPORTS・6 DAYS AGO
buckinghamshirelive.com

Red Bull technical advisor Helmut Marko has conceded that he thinks Lewis Hamilton holds an advantage in the title race despite Max Verstappen's lead in the championship. Hamilton's sensational drive at the Sao Paulo Grand Prix saw the Mercedes ace cut Verstappen's lead to 14 points heading into the final three races of the season.
MOTORSPORTS・10 DAYS AGO
firstsportz.com

Max Verstappen and Lewis Hamilton have at each other’s throughout the 2021 Formula 1 season and have made the world championship wide open with only 3 races to go. With Mercedes having an 11-point lead in the Constructor’s Standings, it is the Dutchman who leads the seven-time world champion by 14 points. Hamilton and Verstappen have disagreed over racing rules this week after Verstappen escaped a penalty for a defensive move in last week’s race in Brazil.
MERCEDES, TX・5 DAYS AGO
racingnews365.com