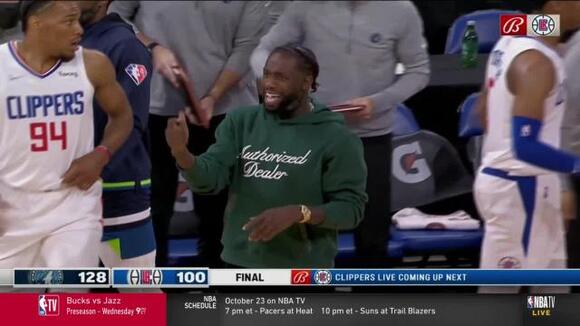 Watch the Game Highlights from LA Clippers vs. Minnesota Timberwolves, 10/11/2021

Although fans might have witnessed great sportsmanship and friendship in the NBA over the course of its years to signify the positive side of NBA yet the other side is as ruthless as it can get. The latest to justify this claim, came in the Heat vs Timberwolves showdown as the home fans dug deep to spring up Jimmy Butler’s alleged past affair on national television during the on-going match.
NBA・11 DAYS AGO
fadeawayworld.net

The NBA season is in full effect and we have already seen some major moves made this offseason. These have been massive roster moves, with Russell Westbrook finding a new home in Los Angeles while the Washington Wizards and Chicago Bulls completely revamped their rosters. There could very well be even more player movement before this season’s trade deadline.
NBA・9 DAYS AGO
fadeawayworld.net

The NBA generally features a lot of player movement, and we've seen plenty of stars switch teams in recent memory. Sometimes, we even see multiple big-name players move in one transaction. Zach Buckley of Bleacher Report has recently proposed a blockbuster trade which would send Karl-Anthony Towns to Boston, Jaylen...
NBA・21 DAYS AGO
AllClippers

LA Clippers vs. Dallas Mavericks: Preview, How to Watch, and Betting Info

The LA Clippers and Dallas Mavericks are no stranger to one another. The two teams have faced off in the first round of the playoffs in two consecutive years, with the Clippers prevailing both times. Last year's first-round series went down to the wire, with Luka Doncic pushing the Clippers to the brink of elimination. Everything changes for Sunday's matchup if he is available.
NBA・14 DAYS AGO

Anthony Edwards had a huge dunk in the game between the Minnesota Timberwolves and Brooklyn Nets.
NBA・2 DAYS AGO
basketballinsiders.com

The Golden State Warriors make the short trip to the Staples Center for a Western Conference showdown with the Los Angeles Clippers on Sunday afternoon. The Warriors (17-2) and Stephen Curry are off to a blistering hot start and sit atop the Conference through 19 games. The Clippers (11-8) have been getting it done defensively and will try and slow down the fast-paced Warriors. Golden State opens this game as road favorites.
NBA・7 DAYS AGO
NBA

At this precise moment, the Golden State Warriors are the best team in basketball, and Steph Curry is arguably the best player in basketball. If things stay the way they are, Curry will almost certainly take home his 3rd MVP award. While the season is still young, Steph and the Warriors have been silencing doubters with each passing game.
NBA・7 DAYS AGO

The New Orleans Pelicans aim for their third win in four games as they visit the Los Angeles Clippers on Monday, 10:30 PM, at Staples Center. Register now on BetUS and claim up to $2500 of FreeBets. The Pelicans saw their two-game winning streak snapped by the Jazz on Saturday,...
NBA・6 DAYS AGO
vavel.com

The game will be broadcasted through NBA League Pass. If you prefer to follow the game LIVE online, remember that VAVEL USA is your best option. The Los Angeles and New Orleans teams played just last Friday, November 19, in a game where the Pelicans managed to win against all odds, so now the Clippers will want to get their revenge in front of their fans.
NBA・7 DAYS AGO
USA TODAY Sports Media Group

LA Clippers -7.5 vs Sacramento Kings. The Clippers are 1-6 against the spread in their last seven games. The Kings are 14-6 against the spread in their last 20 road games. The Sacramento Kings (8-14, 11th in NBA – West) and the Los Angeles Clippers (11-10, 6th in NBA – West) are scheduled to close the Wednesday basketball betting board on Wednesday night with tipoff scheduled for 10:30pm ET at the Staples Center. Paul George and his Clippers’ teammates host the Kings in LA’s opener of a four-day, two-game schedule.
NBA・4 DAYS AGO
lineups.com

Sacramento Kings vs. Los Angeles Clippers Matchup Preview (12/1/21) The directionless Sacramento Kings will make the relatively short trip to Los Angeles to take on the Clippers in the Staples Center. Sacramento recently decided to part ways with Luke Walton and made Alvin Gentry its interim head coach, which has yielded mostly the same results. One notable difference is the Kings’ fortitude in their 3OT game against the Los Angeles Lakers on the road. That is certainly not a game that they could have won a few weeks earlier. Still, the Kings are dealing with several injuries to key players, including Moe Harkless and Harrison Barnes. Barnes will likely not play in this game, which will be a huge blow as he is one of their leading scorers. Meanwhile, Harkless is questionable, but he may not get the same minutes immediately, even if he plays. The Clippers are also very familiar with injuries. They just got Marcus Morris Sr back but will be without Nic Batum for at least a little longer. Morris rested on Monday for the second night of a back-to-back; however, he should be available for this bout. Additionally, the Clippers have been without Kawhi Leonard all season due to the knee injury in the second round of last season’s NBA playoffs. Since the Clippers are at home and aren’t dealing with significant injuries like the Kings are, I like for them to get a home win.
NBA・4 DAYS AGO
FanSided

The LA Clippers haven’t been great this year, but they certainly haven’t been bad. One way for them to get all the way up to the level they want to play at is simply winning five straight winnable games that are all up here in a row on LA’s schedule.
NBA・3 DAYS AGO
FastBreak on FanNation

Karl-Anthony Towns has been listed as questionable for the game between the Minnesota Timberwolves and Brooklyn Nets.
NBA・2 DAYS AGO
Sportsnaut

Boston Celtics big man Enes Kanter recently made headlines after he went on an all-out attack on Los Angeles Lakers superstar LeBron James and his alleged ties to China. Unsurprisingly, Kanter has United States Senator Ted Cruz backing him in his corner as the outspoken Republican also went on an unfiltered tirade against LeBron.
NBA・14 DAYS AGO
Sports Illustrated

The Golden State Warriors crushed the Brooklyn Nets 117-99 on Tuesday night to improve to a 12-2 record, which is the best in the NBA. Meanwhile, the Nets fell to 10-5, (but they did rebound on Wednesday night beating the Cleveland Cavaliers 109-99 to improve to 11-5). Kevin Durant was...
NBA・17 DAYS AGO
Arizona Sports

JaVale McGee has been wearing protective glasses in games since getting booped in his eye earlier this month. Since, he’s made the best of it. McGee successfully took the style of his glasses to another level last Friday when his Phoenix Suns visited the Memphis Grizzlies. McGee sported dark lenses...
NBA・18 DAYS AGO