Lala Anthony Speaks Publicly About Her Divorce For The First Time: ‘It Got Bad’ 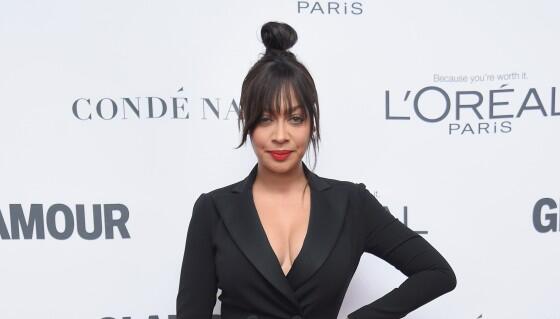 Lala Anthony is known for keeping her private life very private, so much so that fans have never heard the television personality and actress speak publicly about her split from Carmelo Anthony… that is until now.

In an interview with Power 105.1’s Angie Martinez, Lala finally opened up about her divorce, explaining why she kept it private for so long and how the split made her feel. “It’s been years now since then,” she explained. “Like, to a lot of people it feels like this single thing is new like it’s been years now that we’ve separated.  So I’ve dealt with the emotions behind it and I still have my moments but for the most part, I can talk about it now and laugh about it and find the humor in it all, otherwise, I would be a basket case. I already went through that. I already went through that part.”

Lala then explained why she kept it a secret for so long and only now decided to open up about her experience. “And you know, I’m not a person that ever puts my business on social media. I’ve never talked about it but you’re my friend and I’m comfortable,” she told the radio host. “But it’s like so many times you do want to say, ‘Oh you guys really wanna know what happened? You wanna hear it from me?’ But you hold it in and it’s like, ‘Oh La’s doing good and she looks good on the ‘Gram,’ But, it’s like Nah, that s***t  really hit me hard.”

Check out the interview below.

Beauties, what do you think about Lala’s decision to publicly speak on her divorce? By sharing her experience, Lala might have just helped someone else who’s going through the same thing right now.

INSTADAILY: LaLa Anthony Is Out There Living Her Best Life On The ‘Gram

Don't keep talking about your husband move on he was not ready to settle for one woman.why did he mess around?

Is this one of those let me see if I matter articles? As you can see, you broke the bored barrier. Only one person tried to make it gossip. Everyone else wants to know why you didn't just move on. Because you're marriage problems are irrelevant.

Listen up! Read this and tell me if it describes you and your ancestors or the people who own the diamond industry, Hollywood, and the world banks? "They are a stiff-necked (hard-headed) people", "I will bring you into Egypt (slavery) again ON SHIPS", "your men will have an evil eye towards their brother (violence), toward his wife, and to his kids which he will leave", "the brokenhearted, the captives, and them that are bound", "you will discontinue (forget) your heritage and you will serve your enemies in a foreign land" This is ALL in the bible! The same book that says "I know the blasphemy of them that say they are Jews and are not..." If they were the Jews and not us why do we fit the curses? Why don't they? If they were us how would they "remember this whole time" they were Jews when the bible said the real Jews would forget who they were? Wake up and return to your stolen heritage, we are the Israelites. I'm not looking for a like, please if this speaks to you RESEARCH IT!

Porsha Williams Speaks Out About Her Experience with R. Kelly

The "RHOA" alum claimed Kelly once asked her to remove her clothes. Porsha Williams is speaking out about her past experience with R. Kelly. In an interview with PEOPLE for this week's issue, published on Wednesday, the "RHOA" alum detailed the first alleged encounter she had with the R&B singer and shared why she spoke to authorities about her experience with Kelly.
MUSIC・11 DAYS AGO
HelloBeautiful

LaLa Opens Up About Her Heart Condition In Self Magazine

La La Anthony covers Self Magazine where she opened up about her secretly struggling with a heart condition she didn't know about until she nearly passed out and had to go to the ER.
BEAUTY & FASHION・16 DAYS AGO
iHeartRadio

The actress opens up about starring in season 2 of the hit Starz' series, working with 50 Cent, new Jonah Hill film and more
MUSIC・13 DAYS AGO

Adele is ready to release 30, her first new album in almost six years. The album chronicles her divorce from husband Simon Konecki and the emotional toll it took on her. “It really helped me [to make] this album,” she tells Apple Music’s Zane Lowe in a new interview, revealing that she “really went to hell and back” when recording 30.
CELEBRITIES・11 DAYS AGO
Fox News

Kim Kardashian roasted herself and her past failed marriages while giving a toast in celebration of her good friend’s wedding. The reality star and fashion mogul had a busy weekend, first attending Paris Hilton’s ceremony on Thursday before pivoting Friday night to a pre-wedding celebration for a friend Simon Huck and his fiance, Phil Riportella.
RELATIONSHIPS・14 DAYS AGO
TODAY.com

During a pre-taped concert special, Adele spoke with Oprah Winfrey in her first television interview promoting her new album, “30.” She also helped a fan make a surprise proposal to his girlfriend.Nov. 15, 2021.
CELEBRITIES・14 DAYS AGO
imdb.com

Jessie J Speaks About Her Miscarriage During Emotional Performance

Jessie J paused her show in Los Angeles to talk about a tragic loss: The miscarriage she suffered just days earlier. On Wednesday, Nov. 24, the 33-year-old British pop star announced on Instagram that she had gotten pregnant after deciding to have a baby on her own. She said that a day earlier, she went in for her third ultrasound and was told her baby no longer had a heartbeat. On Wednesday evening, Jessie talked about her miscarriage during an emotional performance at her intimate, acoustic show at the Hotel Cafe music bar in Los Angeles, as seen in a video posted by TMZ. "I decided to have a baby by myself," she said, tearfully, "and then by a miracle, it worked for a...
LOS ANGELES, CA・4 DAYS AGO

Happy 36th birthday to Joseline Hernandez! Let's "do it like it's her birthday" and look back at five times the reality star served lewks!
BEAUTY & FASHION・26 DAYS AGO
HelloBeautiful

Sy’Rai Smith Thought Her Mother Was ‘Embarrassed’ By Her Weight, But Realized They Were ‘Insecurities’ In Her Head

Brandy's daughter Sy'Rai Smith visited "The Real" where she opened up about her weight loss journey and insecurities.
WEIGHT LOSS・7 DAYS AGO
HelloBeautiful

Tessica Brown Says She Reached Out To Nicki Minaj To Collab On Her New Single ‘Ma Hair’, But She Got Left On Read

It looks like Tessa Brown, who's infamously dubbed "Gorilla Glue Girl," is venturing into the world of music with the release of her new single "Ma Hair."
CELEBRITIES・10 DAYS AGO
St. Louis American

Award-winning actress Taraji P. Henson opened up on her Facebook Watch series, “Peace of Mind with Taraji” with Angela Simmons about the moment she knew it was time to leave an abusive relationship from her past. Henson said in a clip that sometimes women fall madly in love and figure...
CELEBRITIES・27 DAYS AGO

Washington [US], November 18 (ANI): Rumoured couple, actors Tom Holland and Zendaya recently spoke about navigating relationships while in the public eye. People Magazine obtained the recent interview of the 'Spider Man' actors with GQ for the magazine's Men of the Year issue; where the duo talked about their bond and keeping their personal life private.
CELEBRITIES・10 DAYS AGO
vermilioncountyfirst.com

Britney Spears called out Christina Aguilera for “refusing to speak” about her recently terminated conservatorship during a red-carpet interview. When a reporter asked Aguilera her thoughts on the conservatorship prior to the Latin Grammys on Thursday (Nov. 18th), a publicist advised the former Voice coach not to answer the question.
CELEBRITIES・7 DAYS AGO
goodhousekeeping.com

Gabrielle Union's daughter has the best kid's costume this Halloween. The Being Mary Jane actor shared pics of her two-year-old Kaavia James Union Wade, in which the toddler recreates Adele's glamorous look from basketball star Anthony Davis' wedding. In the pics, Wade poses at home, wearing an accurate dupe of the "Easy on Me" singer's Schiaparelli gown, featuring a black bodice and puffed white off-the-shoulder sleeves.
CELEBRITIES・26 DAYS AGO
Elite Daily

Kim Joked About Her Past Marriages And Got A Little Shady

Kim Kardashian hosted Saturday Night Live on Oct. 9, and the jokes haven’t stopped since. On Nov. 12, Kardashian went to her friends Simon Huck and Phil Riportella’s wedding rehearsal dinner, where she gave a slightly shady toast, poking fun at her past marriages. Though most of her jokes were self-deprecating (and honestly very funny), there was one quip that raised some eyebrows — and not in a good way.
CELEBRITIES・13 DAYS AGO
PopSugar

Adele is letting fans listen in on some of the hardest conversations she's ever had to have with her son. The third track of the singer's fourth studio album, 30, which was released on Friday, included snippets of voice notes that she recorded while speaking to her 9-year-old child, Angelo. Throughout the song, titled "My Little Love," she can be heard discussing her divorce from his father, Simon Konecki, which was finalized in March.
RELATIONSHIPS・9 DAYS AGO
sacramentosun.com

Washington [US], November 19 (ANI): British singer-songwriter Adele's highly-anticipated fourth studio album "30" which was released recently includes a voice note to her son about divorce. '30' is the first album the award-winning singer has released since 2015. According to Fox News, Adele's been open in recent interviews about her...
MUSIC・9 DAYS AGO
Inside the Magic

It’s hard to go anywhere without Spider-Man being mentioned. The third Marvel Cinematic Universe installment from director Jon Watts is set to land in theaters this December, and the hype is seemingly out of control. With rumors coming weekly, a new trailer confirming returning villains, and continued denials from actors like Andrew Garfield, the next Spidey venture is sure to draw huge audiences.
CELEBRITIES・10 DAYS AGO
imdb.com

Jana Kramer is trying to find the gratitude in a difficult situation. More than four months after finalizing her divorce from Mike Caussin, the former One Tree Hill star found herself celebrating Thanksgiving on Nov. 25 without her two kids: Jolie, 5, and Jace, 2. "Happy Thanksgiving! I'm beyond thankful for my beautiful babies," she wrote on Instagram with a family photo captured by Amalia Karaman. "My heart hurts not being with them today and I have a feeling whether it's the first holiday apart or the 30th there will always be an ache in the heart…But how grateful and thankful I am that I'm their momma." The country singer added, "Thinkin of all the...
FAMILY RELATIONSHIPS・4 DAYS AGO