What’s He Looking At? Jay-Z Spotted at London Art Events 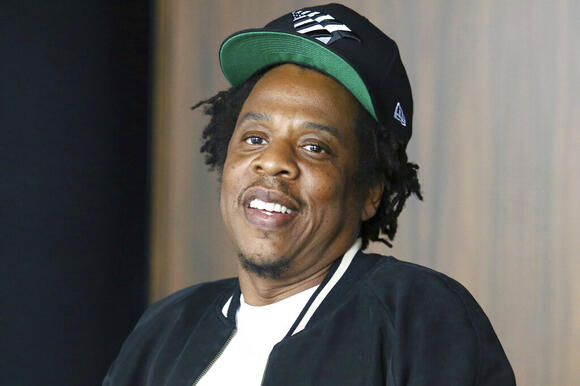 It usually takes the first VIP day of an art fair for the celebrity-spotting to begin, but it looks like one candidate showed up early this time. Just days ahead of the annual Frieze art fair, Jay-Z made the rounds at the much-anticipated London exhibitions last Thursday.

That night saw the rapper and music executive at two high-profile events, the first a performance by Brooklyn-based artist Torkwase Dyson at the new Mayfair location for international mega-gallery Pace , where the gallery’s performance curator Mark Beasley captured a photo of him watching raptly for an Instagram story. As it happens, Dyson’s uncle, Michael Eric Dyson, is the author of the well-received 2019 biography Jay-Z: Made in America . Jay-Z also has a history with Pace: he recorded a video at the gallery’s New York space in 2013 for his song “Picasso Baby” featuring Marina Abramović and other art world notables.

Next stop, London: the opening of curator Antwaun Sargent’s Gagosian exhibition, “ Social Works II ,” the first edition of which was exhibited at the gallery’s New York space. Like “ Social Works I,” the London show spotlights the works of artists of the African diaspora to consider themes of public and private space. Sargent, who got a picture with Jay-Z for social media, and who earlier this year year guest-edited an issue of ARTnews ‘s sister publication, Art in America , is no stranger to celebrity; he was recently table mates with Madonna at a different event .

Jay-Z and Beyoncé are prolific art collectors; they own works by Jean-Michel Basquiat, Derrick Adams, and many other artists. The couple recently posed with a Basquiat for a Tiffany ad campaign, and in June, an NFT that Jay-Z commissioned from Adams went up for sale .

What if artists got to respond to writers the way writers often get to respond to artists? This was question Emma Cline, the award-winning author of The Girls (2016) and Daddy (2020), brought to Larry Gagosian when she pitched creating a new imprint under his namesake gallery’s existing publishing house. The imprint, Picture Books, will see artists create a work in response to a text they’ve been paired with. To launch the imprint, Ottessa Moshfegh, author of My Year of Rest and Relaxation (2018), has offered up her new novel, My New Novel (2021), to inspire a work by artist Issy...
BOOKS & LITERATURE・10 DAYS AGO
ARTnews

The lights never go out in Abu Dhabi, but during the countdown to the United Arab Emirates “Golden Jubilee” this December, the night is especially dazzling. Sparkling advertisements for the 50th anniversary of the unification of the Gulf nation decorate the highways and wrap glass skyscrapers. After a quiet pandemic year, the capital and wealthiest of the Emirates has prepared to party. The opening of Abu Dhabi Art on November 17, marking the fair’s first in-person edition since 2019, presented a more subdued scene. International visitors were scarce, and several veteran exhibitors said that attendance was slim in comparison to years...
VISUAL ART・11 DAYS AGO
ARTnews

Virgil Abloh, the boundary-breaking designer who united high fashion, art, and hypebeast culture—transforming the public’s perception and consumption of each—died on Sunday in Chicago at the age of 41. In a statement, Abloh’s family shared that he had been privately battling cardiac angiosarcoma, a rare form of cancer, since 2019. Abloh’s expansive vision was complemented by his cross-disciplinary background as a trained architect, engineer, and fashion designer, as well as occasional furniture designer and DJ. Abloh was the first Black man to helm a major fashion brand, ascending to the role of artistic director of Louis Vuitton’s menswear while still designing...
CHICAGO, IL・19 HOURS AGO
E! News

Watch: How Jay-Z's Empire Went from Mediocre to Mainstream. Billionaires are getting the True Hollywood Story treatment. Tonight's all-new episode of the E! series will delve into the lives and careers of Elon Musk, Jay-Z and Sara Blakely, who have several things in common: They all faced adversity and tragedy, which fueled their ambition to strive for the best.
CELEBRITIES・14 DAYS AGO

London On Da Track Says Dr. Dre Loves What He's Been Cooking Up In The Studio

London On Da Track has had a tumultuous 2021. The Atlanta producer, best known for his work with Young Thug in 2015, started the year by welcoming a baby girl with R&B songstress Summer Walker. Unfortunately, the love parade between the two new parents was short-lived. Three months after London and Walker celebrated the birth of their child, the "Come Thru" singer put him on blast all over social media. The internet beef, which saw Walker shredding London for allegedly not paying bills related to their baby, ultimately lead to Still Over It, Walker's sophomore studio album that debuted at #1 on the Billboard 200 and moved 166K album equivalent units in its first week.
MUSIC・5 DAYS AGO
Gazette

LOS ANGELES (Reuters) - Rapper Jay-Z rose to the top of the list of artists with the most Grammy nominations on Tuesday, hitting a lifetime total of 83 that put him just ahead of former Beatle Paul McCartney. The three latest nominations for Jay-Z came for collaborations with other artists....
MUSIC・6 DAYS AGO
KTLA

Virgil Abloh, a leading designer whose groundbreaking fusions of streetwear and high couture made him one of the most celebrated tastemakers in fashion and beyond, has died of cancer. He was 41. Abloh’s death was announced Sunday by the luxury group LVMH (Louis Vuitton Moët Hennessy) and Abloh’s own Off-White label, which he founded in […]
BEAUTY & FASHION・1 DAY AGO
The Independent

Kanye West led a music tribute to Virgil Abloh with his Sunday Service choir, following news of the designer’s death from cancer, aged 41. The US artist, who legally changed his name to Ye last month, posted a link to the livestreamed performance on his Instagram Stories, shortly after it was announced that Abloh had died. The livestream showed grainy footage of the choir apparently performing in near-darkness, with an audience in attendance and West conducting as children ran around the large event space. Included in the set was a cover of Drake’s track “God’s Plan”, and Adele’s recent...
MUSIC・1 DAY AGO

Aside From Being A Fashion Pioneer, Virgil Abloh Helped Conceptualize These Legendary Album Covers [Gallery]

Fashion designer and entrepreneur, Virgil Abloh died at 41 years old from cancer.  Aside from being a fashion pioneer, he had a hand in some of the most notable album artwork. Check out some of Virgil Abloh's most popular album covers over the years inside.
NEW YORK CITY, NY・14 HOURS AGO
HipHopDX.com

Now that JAY-Z is a newly-inducted member of the Rock & Roll Hall of Fame, he can celebrate this significant accomplishment in style. On Sunday (November 21), Rhuigi Villaseñor, the founder and creative director of Rhude, gave fans a look at an unreleased varsity letterman jacket commemorating Hov and his new Rock & Roll Hall of Fame status.
HIP HOP・6 DAYS AGO
Los Angeles Times

Virgil Abloh honored by Lenny Kravitz, BTS: 'You made an indelible mark'

Like father, like daughter. Widely recognized as one of the greatest rappers of all time, Jay-Z recently got inducted into the Rock and Roll Hall of Fame--and who better to honor him than his firstborn child, Blue Ivy Carter? In a pre-recorded video released over the weekend, the...
CELEBRITIES・7 DAYS AGO

Beyoncé took social media by storm on Wednesday when she wore a plunging white gown in a new Instagram photo with husband Jay-Z. The singer's snap has racked up over one million likes in a matter of hours, and it's not hard to see why. The 40-year-old looked sensational in the figure-hugging gown, which she styled with a white fur coat and a yellow diamond necklace.
CELEBRITIES・27 DAYS AGO
hotnewhiphop.com

Congratulations are in order for the legendary JAY-Z, who has officially become the artist with the most all-time GRAMMY Award nominations. The Brooklyn native was previously tied with Quincy Jones with eighty nominations over the years, but his three nominations this year push him to the top spot. He may...
MUSIC・6 DAYS AGO
toofab.com

A proud daughter bursts out laughing while honoring her father and his induction into the Rock & Roll Hall Of Fame. 9-year-old Blue Ivy made a rare appearance in her father Jay-Z's pre-recorded tribute video. The 2021 inductees were honored in a ceremony that aired on HBO on Saturday November 20.
CELEBRITIES・7 DAYS AGO
HipHopDX.com

Released in March 2006, “Hustlin'” put Rick Ross on the map. The larger-than-life street anthem cracked the Billboard Hot 100 while pushing his debut album Port of Miami — which arrived later that year — to the top of the Billboard 200. “Hustlin'” didn’t just flood the streets in Rozay’s...
CELEBRITIES・12 DAYS AGO

Hollywood stars, famous musicians and fashion executives were among those paying tribute to late Louis Vuitton artistic director Virgil Abloh, who died Sunday after a private battle with cancer. Abloh was 41. A number of those who posted about Abloh’s death highlighted his young age as they also paid tribute to his talent. “What can you say when a force like Virgil Abloh is taken too soon? You gave the world so much, in so little time,” Justin Timberlake wrote on Instagram. “And created with intensity… knowing better than the rest of us that life is short, but anything is possible. I’m...
CELEBRITIES・1 DAY AGO
cbslocal.com

NEW YORK (CBSNewYork) — The number of Americans applying for unemployment benefits fell for the seventh straight week. The latest numbers from the Labor Department show claims dropped by 1,000 to a pandemic low of 268,000. Still, many are looking for work, and rapper Jay-Z’s company, Roc Nation, stepped in...
NEW YORK CITY, NY・11 DAYS AGO
phillyvoice.com

Questlove has had a busy year. His directorial debut, "Summer of Soul (...Or, When the Revolution Could Not Be Televised)" premiered at Sundance early in the year and went on to crush the festival and awards circuit, most recently with six Critics Choice documentary awards. As part of the 2021...
CELEBRITIES・8 DAYS AGO