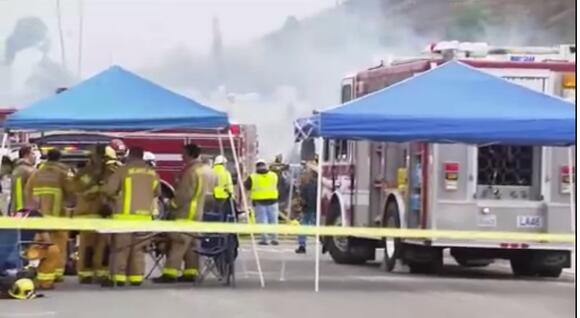 "We are deeply sad to hear news of a plane owned by local cardiologist Dr. Sugata Das, which crashed near Santee.

As an outstanding cardiologist and dedicated family man, Dr. Das leaves a lasting legacy legacy. We extend our prayers and support to his family, colleagues, and friends during this difficult time."

Stay with KYMA.com, News 11, and 13 On Your Side for continuing coverage of this developing story.

YUMA, Ariz. (KYMA, KECY) - Investigators now say a plane that crashed Monday afternoon in Santee was headed to San Diego from Yuma when it encountered some unknown issue and tried to land at nearby airport.

The twin-engine Cessna then went down in a neighborhood, destroying two homes. Two people are confirmed dead, including a UPS worker who was on the ground. Witnesses tell NBC 7 in San Diego the wing of the plane actually clipped the UPS truck.

They say the body of the aircraft then slid towards some homes and exploded. The blast demolished two homes and damaged five others. Neighbors say they heard the aircraft getting closer, then felt its impact.

"I just heard it getting louder. I've lived in this area for a long time, you get kind of worried and don't pay attention to stuff unless it's out of the norm. It started getting so loud that I knew it was not right. And before I could even react to it, it hit," said neighbor Mike Bowen.

First responders say it will take some time to sift through the debris field to determine if there are additional casualties.

Paramedics did transport two people to the hospital. It's unclear if either of those victims are among the fatalities.

KYMA.com has learned the plane was registered to Samarth Aviation, LLC, which is owned by Dr. Sugata Das, a cardiologist at YRMC. We're told Dr. Das did commute between Yuma and San Diego, but there is no confirmation he was onboard at the time of the crash.

The Federal Aviation Administration, (FAA), and the National Transportation Safety Board, (NTSB), are currently on scene investigating. So far neither agency has released any information on the number of people aboard the plane, or their identities.

Officials have confirmed two people died in the crash, but it's unclear whether they were on the plane or on the ground.

We've learned at least two people were killed in the fiery crash. No word on if the victims were aboard the plane or on the ground.

We've also learned more about the aircraft involved. FAA documents show the twin-engine Cessna was registered to a Yuma company, Samarth Aviation LLC. No information is available on the number of people aboard the flight, or their identities.

KYMA.com will bring you additional updates as we learn more.

The twin-engine Cessna went down around 12:15 in Santee. The crash damaged at least two homes. At least one was destroyed.

This is a developing story. Stay with KYMA.com for more details as they become available.

Bills, they’re something everyone dreads each month. However, out in Yuma, locals are having to pay more than most of the country. The post New study shows Yuma has 5th highest utility bills in the country appeared first on KYMA.
YUMA, AZ・2 DAYS AGO
KYMA News 11

It's certainly been a busy time for border patrol agents. More than 750 people continue to cross illegally, through the Yuma Sector every single day. The post Undocumented immigrants hiding under trees and shrubs appeared first on KYMA.
YUMA, AZ・4 DAYS AGO
KYMA News 11

The North American Leader's Summit comes as a group of thousands of migrants begins to make their way to the United States. The post Migrant caravan leaves Southern Mexico appeared first on KYMA.
YUMA, AZ・10 DAYS AGO
KYMA News 11

The recent passing of longtime business owner and member of various boards and service organizations Bobby Brooks has touched the hearts of many locals. The post City recognizes passing of former Councilmember Bobby Brooks appeared first on KYMA.
YUMA, AZ・9 DAYS AGO

With the weather cooling across the Imperial Valley, more bicyclists and walkers will be on the streets. With that, comes a rise in potential pedestrian crashes. The post CHP urges driver vigilance as weather cools appeared first on KYMA.
IMPERIAL COUNTY, CA・11 DAYS AGO
KYMA News 11

Breakdancing went from underground battles in garages and at parks to actual leagues and is even heading to the 2024 Paris Olympics. Breaking, jamming, and battling… words you definitely want to hear as a breakdancer. The post Yuma local takes home breakdancing trophy appeared first on KYMA.
YUMA, AZ・11 DAYS AGO
KYMA News 11