Halsey shares message about postpartum body after SNL praise: ‘I do not want to feed the illusion’ 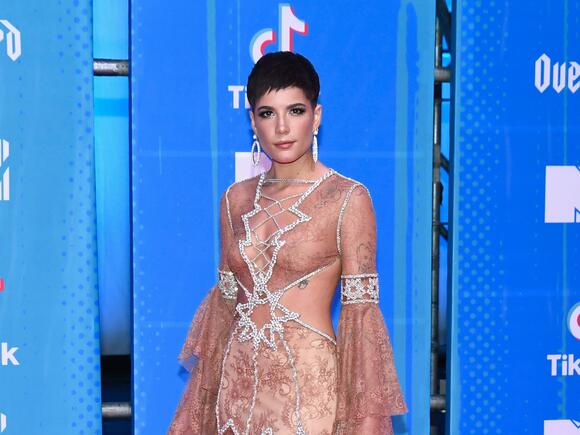 Halsey has spoken candidly about how their body has changed following their pregnancy after receiving praise for their appearance on Saturday Night Live .

On Monday, the singer, who gave birth to their first child, a son named Ender, with boyfriend Alev Aydin in July, addressed the attention regarding their appearance with an Instagram post.

In the post, Halsey shared photos of herself in the months after giving birth, with the first photo showing her with an extended stomach, while the other postpartum photos included candid pictures of her stretch marks.

In the caption, the singer, who performed as the musical guest on Saturday Night Live over the weekend, said that they were posting the photos because “no matter what I do people are going to talk about my body”.

Halsey then went on to explain that it was a “weird feeling” for them to see people talking about how good they looked on SNL because their “body has felt like a stranger’s for a long time”.

Acknowledging that message felt “important” to share, Halsey proceeded to share details about the photos they’d posted, with the 27-year-old beginning with the first picture, taken just days after her baby was born, and writing: “A lot of people don’t know that you still look pregnant for a while after. It is still changing and I am letting it.”

“I have no interest in working out right now,” Halsey continued. “I’m too tired and too busy playing with my darling son.”

The Without Me singer then addressed the comments about their appearance on SNL , revealing that the “body behind all those compliments the other night was wearing a custom tailored outfit and lighted perfectly after much testing,” so that they could “feel good and do my job”.

According to Halsey, she wanted to share the photos of her postpartum body because she does not want to “feed the illusion that you’re meant to feel and look ‘great’ immediately postpartum”.

“This is not my narrative currently,” she wrote. “I will never have my ‘pre baby body back’ no matter how it changes physically because I have now had a baby! And that has altered me forever; emotionally, spiritually and physically. That change is permanent. And I don’t want to go back!”

Halsey concluded the post explaining that, in the “spirit of honesty,” she is tired and that it has been “really hard,” adding: “Doing my best to serve my art and my family whilst keeping it all so very real. Love.”

The singer’s transparency has prompted an outpouring of supportive comments from their followers, with many applauding Halsey for the honest message.

“You are strong and beautiful. Thank you for sharing this,” one person wrote, while another said: “Love you so much, thank you for being honest.”

Wear those stretch marks with pride! Growing/carrying another human for 9 months is no easy task. It truly is a labor of love!

When Adele became a mother in 2012, everything in her world changed. This is true for most parents, of course, but the “Easy On Me” singer has found a way to put into words the complicated, difficult struggle so many of us recognize. In a new interview with Face magazine, Adele opened up about her own battle with postpartum depression and while every experience is different, the singer’s words hold a universal truth that will resonate with so many other moms.
WOMEN'S HEALTH・14 DAYS AGO
Us Weekly

Shenae Grimes-Beech Gets Real About Postpartum Recovery After Son’s Birth: Filters ‘Are Not Reality’

Social media vs. real life. Shenae Grimes-Beech is getting real about the ways in which the internet has affected her postpartum recovery after giving birth to her son, Kingsley, over the summer. The 90210 alum, 32, took to her Instagram Story on Wednesday, November 24, to talk about her post-baby...
WOMEN'S HEALTH・8 DAYS AGO
TODAY.com

Jana Kramer is getting candid about spending her first holiday alone. Kramer, who finalized her divorce from former NFL player Mike Caussin this summer, said that she was not celebrating the holiday with her children in an honest Instagram post. The 37-year-old shared a series of pictures from a photoshoot...
NFL・6 DAYS AGO
mymixfm.com

Halsey recently celebrated their new album If I Can’t Have Love, I Want Power being nominated for a Grammy Award and, in a new interview, reveled in a new honor — being next year’s recipient of the BandLab NME Innovation Award. Speaking with NME, the singer explained why they were...
MUSIC・2 DAYS AGO

Selena Gomez made a rare comment addressing a fan's complaint in her most recent TikTok. In her latest video, the pop star stitched her reaction to a post from Dr. Dawn Bentel explaining the definition of "heavy" drinking. "The CDC defines heavy drinking as 15 or more drinks a week for men and eight or more drinks per week for women," Bentel explains in the video as Gomez is seen cringing sheepishly.
CELEBRITIES・1 DAY AGO
Cosmopolitan

Good morning, time for another Pete Davidson and Kim Kardashian update you never asked for yet desperately need! These two are still very much going strong, and sources are out here chatting to People about their vibe lately. First up? How Kim feels about Pete. (Hint: He is the perfect post-divorce rebound.)
CELEBRITIES・2 DAYS AGO
HelloBeautiful

Cardi B Claps Back At Commentator Who Called Her ‘Mixed’ After Hair Growth Photo: ‘There Is No Such Thing As Bad Hair. All Hair Is Good!’

Cardi B took to social media to set the record straight that all hair is good hair.
CELEBRITIES・18 DAYS AGO
BET

DJ Envy’s family just got a little bigger. According to a post on his wife Gia Casey’s Instagram account, the couple gave birth to a baby girl, their sixth child. “Special Delivery!!! @djenvy and mommy, WE DID IT!!! My beautiful mother’s spirit was right here with me on this day and standing beside me in the room as we welcomed our new baby into the world…” Casey captioned a picture of her holding the newborn.
CELEBRITIES・21 HOURS AGO

Rihanna Shut Down Pregnancy Rumors With a Very Rihanna DM

Rihanna became the 11th person ever to be named a National Hero in Barbados this week, but tabloids and some on social media were far more fixated on whether or not she could be expecting her first child with boyfriend A$AP Rocky because of the orange dress she wore. Rihanna...
CELEBRITIES・18 HOURS AGO
The Independent

Adele has spoken candidly about “mourning” the person she was before she became a mother while opening up about her experience with postpartum depression.The Someone Like You singer, who shares nine-year-old son Angelo with ex-husband Simon Konecki, discussed her experience with motherhood during an interview with The Face, where she revealed that there are “definitely a few elements” of herself that she doesn’t think she’ll “ever get back”.According to Adele, one of the biggest changes since welcoming her son in 2012 was the loss of freedom, with the singer noting: “More than anything, it’s the freedom of being able to...
WOMEN'S HEALTH・14 DAYS AGO
KXLY

Busy Philipps: I received messages from other moms after talking about my kid’s gender identity

Busy Philipps has received messages of thanks from other mothers after revealing her child is non-binary. The ‘Busy Tonight’ host announced her 13-year-old child Birdie had come out as non-binary last year, and has said that since sharing the news with the world, she has received “so many” messages from other parents who thanked her for talking openly about her child’s gender.
CELEBRITIES・7 DAYS AGO
KSLTV

(CNN) — Christina Applegate is marking a milestone birthday after revealing her multiple sclerosis diagnosis in August. Applegate celebrated her 50th birthday on Thanksgiving Day with a message for her fans on Twitter. “Yup. I turned 50 today. And I have MS. It’s been a hard one,” she wrote. “Sending...
CELEBRITIES・5 DAYS AGO

George Clooney is said to have given up on Amal that he has no choice but to divorce her. Clooney had planned on leaving his rocky marriage with Amal that he also once photographed driving alone. Globe reported that time that the couple developed more tension in their relationship as Amal continuously bossed Clooney around.
CELEBRITIES・14 DAYS AGO
Hello Magazine

It's no secret that Brooklyn Beckham is a fan of cooking, often taking to Instagram to share videos of his culinary creations with his 12.9 million followers. On Sunday, David and Victoria Beckham's eldest son put his cooking skills to the test once again. This time, the 22-year-old whipped up an Italian-inspired meal for his fiancée Nicola Peltz and her friends as the actress enjoyed a girls' night in the duo's $10.5 million Beverly Hills mansion.
CELEBRITIES・10 DAYS AGO
romper.com

Beyoncé has dropped her latest Ivy Park line but all everyone can talk about are her two best models. The star’s daughters Blue Ivy and Rumi Carter both made appearances in their mother’s latest ad campaign for Ivy Park x Adidas’ Halls of Ivy collaborative collection and absolutely stole the show.
CELEBRITIES・2 DAYS AGO
survivornet.com

The Power of Gratitude, According to Michael J. Fox. Michael J. Fox, 60, says in a new interview he’s focusing on gratitude and optimism while living with Parkinson’s disease. Fox was diagnosed with early-onset Parkinson’s in 1991 when he was just 29 years old. Expressing gratitude and keeping a positive...
CELEBRITIES・1 DAY AGO
Hello Magazine

Pink has taken to Instagram to show off her "leg contraption" after having hip surgery. The pop star shared a video to thank her followers for advice on cookie recipes ahead of Thanksgiving, but she ended the clip with a look at the machine. "Thank you to everyone that just...
CELEBRITIES・7 DAYS AGO
glamourmagazine.co.uk

Just in time for the holiday shopping season, Ivy Park dropped its latest collaboration with Adidas. And the accompanying video features Beyoncé with both her daughters, Blue Ivy and Rumi. Obviously, the three look absolutely iconic together. Titled #HALLSOFIVY, the video puts a new spin on the “Ivy League” collegiate...
CELEBRITIES・1 DAY AGO
KGO

LOS ANGELES -- Get ready to side step, left-right, to their beat: BTS will take the stage with Megan Thee Stallion for the televised world premiere performance of "Butter" at the 2021 American Music Awards. BTS and Megan Thee Stallion were among the first crop of 2021 AMA performers announced...
CELEBRITIES・24 DAYS AGO