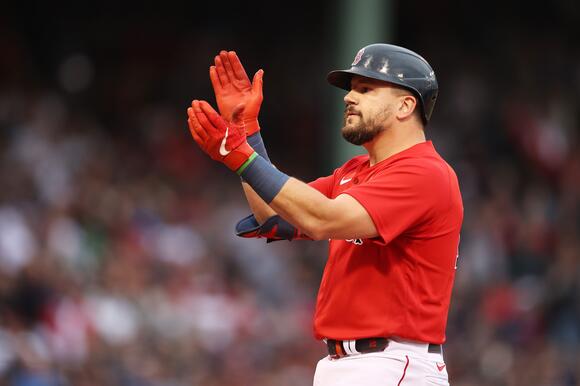 Meet Blue, who has been a member of the Schwarber family since his days with the Chicago Cubs. The adorable Dalmatian, perhaps enlivened by Sunday’s thrilling, extra-innings triumph over Tampa Bay, was in a decidedly chipper mood Monday, wagging his tail when greeted by a photographer outside the players’ entrance.

Schwarber, who joined Boston at the trade deadline after beginning the year in Washington, has been a steady presence in the middle of the Red Sox’s lineup, batting an even .300 since his arrival this summer. The 28-year-old’s solo blast off Rays starter Drew Rasmussen in Game 3 was his second of the playoffs and the eighth of his postseason career. He also appears to be settling into his new role at first base, pumping his fist Sunday after executing a slick, underhand toss to retire Ji-Man Choi.

The Red Sox can bury their division rival once and for all with a win in Game 4, which would punch Boston’s ticket to the American League Championship Series against Chicago or Houston (their ALCS opponent in 2018). And if that happens, Blue should have plenty of tasty treats and belly rubs to look forward to when his dad gets home.

A former Boston Red Sox player who helped the team win a World Series title in 2007 has died. According to ESPN Deportes and Dominican newspaper Diario Libre, former shortstop Julio Lugo died of an apparent heart attack on Monday. Lugo's sister, Rina Lugo, told the sports outlet that her...
MLB・21 DAYS AGO
NESN

The New York Yankees seemingly have been tied to each free agent this offseason, but reportedly got one of their guys Monday. The Yankees signed former Boston Red Sox shortstop José Peraza to a minor league deal, according to Dan Martin of the New York Post. Peraza has bounced around...
MLB・7 DAYS AGO
WEEI Sports Radio

The Boston Red Sox continued to add to their organizational depth, signing former Detroit first-round pick Christin Stewart to a minor-league deal with an invitation to big-league camp.
MLB・6 DAYS AGO
985thesportshub.com

Steven Matz will not be taking his talents to Boston, as the St. Louis Cardinals have outbid the field and signed the lefty to a four-year deal worth up to $48 million, according to ESPN’s Jeff Passan. The Matz decision, which was always expected to come before Thanksgiving, came on...
MLB・12 DAYS AGO

State
Washington State
Inside The Phillies

Free agent Kyle Schwarber has been linked to the Philadelphia Phillies this offseason, but what could it take for the team to land him?
MLB・7 DAYS AGO
Boston

The Red Sox slugger is drawing interest from several teams. If the Red Sox want to keep Kyle Schwarber, it appears that they’ll have to pay up but not make a significant long-term commitment. Schwarber, a free agent, is asking for a three-year, $60 million deal, the Miami Herald‘s Barry...
NFL・3 DAYS AGO
NESN

There generally aren’t a ton of surprises when the Baseball Hall of Fame ballot is unveiled, but there might be enough former Red Sox this year to turn the heads of Bostonians. The ballot was released Monday afternoon, and it featured nine players who played for the Red Sox at...
MLB・14 DAYS AGO
Boston Herald

Chaim Bloom reacts to Eduardo Rodriguez’s departure from Red Sox: ‘We were fighting our emotions on this one’

Chaim Bloom and the Red Sox certainly wanted Eduardo Rodriguez back, but only to a certain point. In the end, the Red Sox just weren’t willing to go where the Detroit Tigers went as Rodriguez accepted a five-year contract worth at least $77 million. Boston extended a qualifying offer to Rodriguez of $18.4 million for 2022 and reportedly were willing to offer him more years beyond that, but it wasn’t nearly enough to sway the left-hander to returning to the only major league home he’s known.
MLB・14 DAYS AGO

The Boston Red Sox recently added four players to the 40-man roster and chief baseball officer Chaim Bloom is excited about what they can add to the squad. Boston on Friday added infielder Jeter Downs and pitchers Kutter Crawford, Josh Winckowski and Brayan Bello to the 40-man roster — protecting them from selection in the upcoming Rule 5 draft.
MLB・14 DAYS AGO
FanSided

Marcus Semien is pricing himself out of the Red Sox free agency plans. There are many paths the Boston Red Sox can explore to upgrade their roster this offseason. While much of the emphasis will be on pitching, improving their infield defense should also be a priority. One way to address that area of need would be by signing free-agent infielder Marcus Semien.
MLB・13 DAYS AGO
MassLive.com

Chief baseball officer Chaim Bloom said Monday that the Boston Red Sox have touched base with almost every starting pitcher on the free agent market. Starting pitching is an obvious need for Boston, especially after Eduardo Rodriguez left via free agency to sign with the Detroit Tigers. How about the...
NFL・14 DAYS AGO
MassLive.com

Boston Red Sox’s Chaim Bloom, Q&A: ‘Little League was it for me. That was about as far as I was going to go’

Red Sox chief baseball officer Chaim Bloom was a better swimmer and tennis player growing up than he was a baseball player. “Little League was it for me,” Bloom said. “That was about as far as I was going to go.”. Let’s take a quick break from free agent rumors,...
MLB・10 DAYS AGO

Michael Wacha has found a new home with the Boston Red Sox, and now we’re getting a few details about his deal. The pitcher and Red Sox agreed to a one-year contract Friday. Wacha is expected to “bring depth” to a rotation that certainly has a lot of questions surrounding it going into the 2022 Major League Baseball season.
MLB・9 DAYS AGO
nbcboston.com

David Ortiz among five ex-Red Sox added to 2022 HOF ballot originally appeared on NBC Sports Boston. The Baseball Hall of Fame unveiled its 2022 ballot Monday, and it includes both a beloved Boston Red Sox player and one of the team's greatest enemies over the last two decades. Red...
MLB・14 DAYS AGO
FanSided

The Red Sox should offer Rafael Devers an extension this winter. The offseason is already firing on all cylinders with free agents finding new homes in a hurry. With the pending lockout looming large over this winter, players and teams aren’t wasting any time in securing what they want for 2022. In regards to the Red Sox, they’ve been quiet so far but one thing that should get locked up right away is an extension for Rafael Devers.
NFL・11 DAYS AGO
philliesnation.com

Phillies ‘in pursuit’ of Kyle Schwarber, per report

The Philadelphia Phillies are indeed interested in free-agent slugger Kyle Schwarber. Jim Salisbury of NBC Sports Philadelphia says that the Phillies “remain in pursuit of Schwarber,” who was an All-Star in 2021. After being non-tendered by the Chicago Cubs last offseason, Schwarber had the best season of his career in...
MLB・7 DAYS AGO

Could Kyle Schwarber and Kris Bryant reunite with Washington Nationals?

Can the Phillies sign Kyle Schwarber after the MLB lockout ends?. Before the MLB lockout, the Philadelphia Phillies were considered to be one of the favorites to land slugger Kyle Schwarber. He’d certainly be a perfect fit for the team, as he can bat leadoff, slug a ton of home...
MLB・2 DAYS AGO
FanSided

We’re days away from a lockout as the owners and MLBPA are nowhere near reaching an agreement on a new CBA. Barring a miracle in the 11th hour we will see all baseball activity halted until the two sides can come to terms. Other teams have gone into overdrive to try and fill their needs before the stoppage occurs, but oddly enough, the Red Sox have been incredibly quiet.
MLB・8 DAYS AGO
Boston Herald

There’s nothing wrong with taking a $7 million gamble on a back-end starter who was once a highly-touted pitching prospect and first-round draft pick. As long as Michael Wacha isn’t the best starting pitcher the Red Sox acquire this offseason, of course. The Sox made it official on Saturday morning,...
MLB・8 DAYS AGO