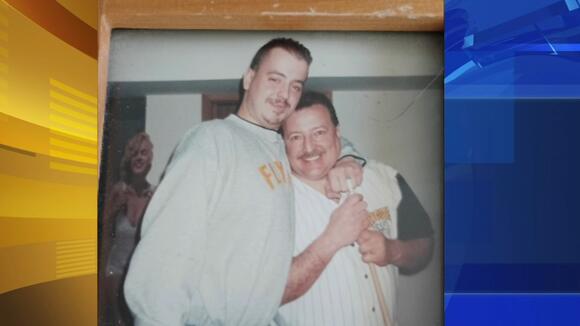 It has been nearly a year since Jeopardy host Alex Trebek died of pancreatic cancer. Doctors are at last moving the needle on survival on this cancer through genetic testing. "I was having stomach pains for a couple days straight," said Joseph Becker of Kensington. A friend also noticed Becker's eyes were yellow. A CT scan ordered by his doctor revealed two tumors. "I was like kind of in shock because my father had passed away from pancreatic cancer, like 6 years earlier," he said. When his father was diagnosed, Becker declined genetic testing, so he didn't know he was at risk. Dr. Michael Hall of Fox Chase Cancer Center said it's now standard for all pancreatic cancer patients. "With a genetic panel, or at least for two genes that are associated with pancreas cancer, and those primary ones are the BRCA one and BRCA two genes," he said. BRCA gene mutations also play a role in breast and ovarian cancers. The ATM mutation Becker carries is tied to pancreatic and breast cancer. Other mutations tied to pancreatic cancer include the PALB-2, CDKN2-A genes, and Lynch syndrome. But Dr. Hall said numerous genes probably contribute. "Once you put those little slivers in the pie, you get to about 10-15% of people having a hereditary risk of some kind," he said. Surgeon Sanjay Reddy said genetic testing has several benefits. It determines which drugs can better shrink tumors before surgery, especially those close to blood vessels, like Becker's. "With the pre-operative therapy, we're able to render a response where the tumor did back away and pull off enough for us to go in there and get everything out completely," he said. It also helps in personalized screening and prevention plans. Doctors already know cutting out smoking and alcohol are important. Becker's son plans to get tested soon. "Even though you carry this gene, it doesn't mean you have cancer, you know what I mean? It's just you got to keep an eye on it," said Becker. Dr. Reddy said Alex Trebek really put the spotlight on pancreatic cancer, empowering patients to talk about it more, and energizing doctors to try new drugs and other treatments.

Hannah Brown is opening up about her childhood health scare. In her new book, God Bless This Mess: Learning to Live and Love Through Life's Best (and Worst) Moments, which covers everything from her childhood to her Bachelor franchise journey and the time beyond that, Brown revealed that she underwent surgery for pancreatic cancer when she was just 11 years old.
CANCER・8 DAYS AGO
Knowridge Science Report

This stuff in your gut can increase risk of pancreatic cancer

SAN DIEGO — November is Pancreatic Cancer Awareness Month. Nov. 18 is World Pancreatic Cancer Day. On this day, people across the globe come together to raise awareness about the symptoms and risks of the disease, and the urgent need for earlier detection. According to data from pancreatic.org, more than...
CANCER・13 DAYS AGO
bcm.edu

Diagnosing pancreatic cancer: what are the symptoms?

Dr. Charles Cha with Hartford HealthCare says he's not exactly sure why but that part of it could be early detection and some environmental factors.
NEW YORK CITY, NY・13 DAYS AGO
AZFamily

A new drug has shown to fight, and in some cases, cure pancreatic cancer in animals. This new drug is giving researchers hope about a cure for this deadly type of cancer.
DISEASES & TREATMENTS・14 DAYS AGO
News 5 Cleveland WEWS

Alisa Warshay has found many ways to honor and remember her father since his death in 2017. On World Pancreatic Cancer Day, Nov. 18, she shared his experience with News 5, as well how she’s gotten involved following his illness and death.
CANCER・13 DAYS AGO
Eyewitness News

(WFSB) -- November is Pancreatic Cancer Awareness Month. This year there is a renewed focus on testing for this deadly disease. Julie Fleshman is raising awareness for pancreatic cancer. Fleshman’s father passed away because of pancreatic cancer. “It’s horrible to watch someone you love go through that,” Fleshman says. She...
CANCER・14 DAYS AGO

Desperate Parents Fight To Save Daughter, 6, Battling Stage IV Neuroblastoma After Her Symptoms Were Dismissed As Growing Pains

A shattered family is trying to pick up the pieces after learning their young daughter is battling stage IV neuroblastoma. Eden Smith, 6, first complained to her parents about her legs being sore in March. Fast Facts: Pediatric Cancer Care. However, it soon became apparent that her pain was not...
DISEASES & TREATMENTS・8 HOURS AGO
Scientist

Kelly Berthoud remembers the day in 2019 when her daughter Marley sprouted her first eyebrows. Already four years old at the time, Marley had been hairless for most of her life, one of several characteristics about the young girl that scientists and physicians had spent years working to explain. But with the family ensconced in the living room on that morning just before Christmas, each tiny blonde hair, now growing as the result of an experimental drug Marley had recently started taking, was a gift. “We were sitting on the couch and the sunshine was hitting her just right,” Berthoud recalls. “I remember whipping my head around when I noticed.”
HEALTH・22 HOURS AGO
Fox40

November is Pancreatic Cancer Awareness Month and this month, the Pancreatic Cancer Action Network (PanCAN) is encouraging pancreatic cancer patients, families, healthcare professionals, and the public to have a conversation about the importance of genetic testing to understand inherited risk for this disease. Talk. Test. Take Control. Save the Date!...
CANCER・13 DAYS AGO
6abc Action News

Dr. Elliott Schulman has been practicing medicine for 40 years. Now, he's learning what it's like to be a patient battling cancer.
PENNSYLVANIA STATE・12 DAYS AGO

This year, 60,000 people will be told they have pancreatic cancer. Every 12 minutes, someone dies of it. Pancreatic cancer is difficult to treat and even harder to beat. In fact, by 2028, pancreatic cancer will be the second-leading cause of cancer death in the United States, but researchers have discovered a new therapy that may be able to give hope to patients.
CANCER・8 DAYS AGO
sandiegomagazine.com

Pancreatic cancer remains one of the deadliest cancers for which there is no current effective treatment. Only one in ten people survive longer than five years, according to the American Cancer Society, and its incidence is on the rise. It is predicted to become the second-leading cause of cancer-related deaths in the U.S. by 2030.
CANCER・14 DAYS AGO
ValleyCentral

Steubenville, Ohio (WTRF) – Cancer may be a physical disease—but its devastating effects reach far beyond the body. Many patients have trouble meeting their utilities and other basic needs—which is why Team Automotive stepped up to help today. They put $100 of every car sale in October toward the Tony Teramana Cancer Center’s T.E.A.R Fund, […]
STEUBENVILLE, OH・12 DAYS AGO
News On 6 KOTV - Tulsa

Pancreatic Cancer Research In Oklahoma Is Helping Save Lives

Pancreatic cancer has one of the lowest survival rates. The latest research shows that, when you combine all stages, the 5-year survival rate is just 10.8%. In fact, about 90% of people who get it will die within 5 years of their diagnosis. The American Cancer Society reports 60,000 people will get pancreatic cancer this year, but 48,000 won’t make it to the new year.
OKLAHOMA STATE・6 DAYS AGO
KX News

KX News (Mandan) — Though it often helps in the fight against cancer, chemotherapy can also cause numerous side effects depending on the patient; one of those side effects is losing all or some of one’s hair. However, it doesn’t have to be that way. As it turns out, there is one option to help […]
MANDAN, ND・7 DAYS AGO
Aiken Standard

November is Pancreatic Cancer Awareness Month, a cause which is near and dear to one Aiken group. Brenda's Angels is a local support group for pancreatic cancer patients, the only one within 150 miles, according to the group's website. Lisa Adams, a board member, spoke about the group's origins. The...
AIKEN, SC・11 DAYS AGO
Newswise

RUDN University doctors examined markers of liver cancer and found that the disease can be recognized by RNA fragments in saliva and blood. The results are published in Oncotarget. Newswise — Liver cancer is less common than other cancers, but it has lower survival rates. Sometimes it appears suddenly, but...
CANCER・8 DAYS AGO