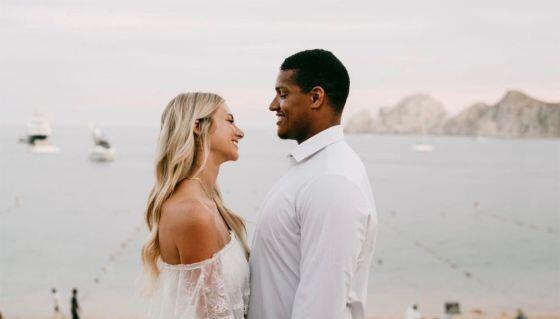 Indianapolis Colts defensive end Isaac Rochell is seen after the conclusion of the preseason NFL football game against the Detroit Lions in Detroit on Aug. 27, 2021.  | Source: NurPhoto / Getty

A s the topic of racism’s incestuous relationship with the NFL rears its ugly head once again, the wife of an NFL player has begun to publicly share a sampling of the racist messages she is being sent on social media in response to her interracial marriage to a Black man .

Allison Rochell, who got married to Indianapolis Colts defensive end Isaac Rochell in April, posted a photo of the happy couple to her Instagram last month to emphasize to her more than 31,000 followers how much she loves “my favorite person.” But the post’s replies were replete with all kinds of racist responses.

Weeks later, on Sunday, Allison Rochell decided to acknowledge the racist comments and shared screenshots of them on her Instagram Stories to provide a sample of the type of anti-Black hatred she had been receiving. She captioned her Stories with four words: “reminder this still exists.”

In one example that sums up the sentiments of all the comments she received, one person wrote, “race mixing is communism.” Another comment included monkey emojis. Yet another claimed her children would be “dysgenic,” a term defined by Merriam Webster as “tending to promote survival of or reproduction by less well-adapted individuals (such as the weak or diseased) especially at the expense of well-adapted individuals (such as the strong or healthy).”

However, a similar post on her TikTok account, which boasts more than 660,000 followers, remained active as of Monday morning and shared the same screenshots and others.

♬ slipping through my fingers – favsoundds

To be sure, there were plenty of people posting comments in support of the Rochells. However, that positivity was overshadowed by the glaring racist hatred being spewed in order to ruin a social media moment intended to spread love.

Allison Rochell’s social media activity came on the heels of the revelation that a current NFL head coach used racist terms when referencing Black people in an email from 2011.

Jon Gruden, who coaches the Las Vegas Raiders in a professional football league, was outed last week as having written an email in which he mocks the name and features of NFL Players Association executive director DeMaurice Smith, according to a Wall Street Journal report .

Gruden, for his part, claimed in an apology that he doesn’t “have a racist bone” in his body.

But the way racism and racist things keep getting associated with the NFL is hardly a coincidence, something due in no small part to the continued fallout over the perceived blacklisting of free-agent quarterback Colin Kaepernick over his kneeling protest used to bring attention to police brutalizing Black people.

If you are proud of your husband and love him, then who cares what others say. Be proud of who you married and don’t let others unhappiness effect you

I'm in a mixed marriage. I'm white she is black. we get the side eye even in CALI. I'm proud of my wife. my children and life we have. I look at it as they just can't get a woman as intelligent and hot as mine.

I’m glad to see people of different races together. I have no problem with them and some are the most beautiful people at heart that I ever met. Time to leave these people alone,love sees no color. If I was single race would no play a role as to who I choose to fall in love with.

The Pittsburgh Steelers were hit with some tough news on Saturday night. Less than 24 hours before the Steelers kickoff against the Detroit Lions, starting quarterback Ben Roethlisberger has been placed on the COVID-19/reserve list. Pittsburgh was a heavy favorite heading into tomorrow’s contest against the 0-8 Lions at Heinz...
NFL・15 DAYS AGO
The Spun

With two losses in just five days, a lot of the luster has come off the Dallas Cowboys. But Cowboys owner Jerry Jones doesn’t plan on hitting the panic button anytime soon. In an interview with 105.3 The Fan on Friday, Jones lamented that his team couldn’t put enough pressure on Las Vegas Raiders quarterback Derek Carr yesterday. But he made it clear that the defense will improve and “the sky is not falling.”
NFL・3 DAYS AGO
600 ESPN El Paso

The saga with Baker Mayfield and his wide receivers continues onward. Whoever thought it was over with the departure of Odell Beckham Jr. was wrong, because now Jarvis Landry has spoken up on his quarterback. He states how he does everything right on Sundays and doesn't know why he isn't getting the ball. He also was asked about why the passing game isn't working and he responded with a no answer of no I don't I'm sorry.
NFL・12 DAYS AGO

FRISCO - Could Dallas Cowboys Hall-of-Fame quarterback Troy Aikman be changing TV jobs?. Amazon is taking over the NFL’s Thursday Night Football broadcasts next year, and the company reportedly wants to make a gigantic move involving its announcing lineup. And including Aikman would be gigantic. According to Mike McCarthy of...
NFL・12 DAYS AGO
The Spun

With Aaron Rodgers officially back, the Green Bay Packers did some backup quarterback shuffling on Monday afternoon. The Packers activated Kurt Benkert from the practice squad Reserve/COVID-19 list and released former No. 3 overall pick Blake Bortles. Green Bay originally brought Bortles into the fold earlier this month after Rodgers and Benkert tested positive for COVID-19.
NFL・13 DAYS AGO
defector.com

Does Lamar Jackson Have Doo-Doo Ass Or What

Ravens quarterback Lamar Jackson was a late and unexpected scratch from Baltimore’s Week 11 road game against the crummy Bears. Jackson, who’d had a cold earlier in the week, said he was “feeling great” after practicing Friday, suggesting he was on track to play. So what the hell happened? Random weight-room injury? Tripped by a mischievous dog while walking down the stairs of his own home? Abducted by aliens? What could knock an MVP-grade quarterback out on a Sunday morning, thrusting the undrafted Tyler Huntley into action for an important road contest?
NFL・7 DAYS AGO
The Spun

Tom Brady has proven that he’s the only quarterback who can give Father Time a run for his money. Despite being 44 years old, the seven-time Super Bowl champion continues to play at an MVP level. On Sunday, Brady and the Tampa Bay Buccaneers will face the Indianapolis Colts in...
NFL・5 DAYS AGO

After a noisy week in Cleveland, Ohio that included the release of star receiver Odell Beckham Jr., many doubted Baker Mayfield and the Browns heading into their week 9 matchup against the Cincinnati Bengals. Myles Garrett wasn’t one of them. According to the All-Pro edge rusher, he pointed to the...
NFL・21 DAYS AGO
The Big Lead

The trade deadline has come and gone and Deshaun Watson is still a member of the Houston Texans. Despite the rumors, it always seemed insane to think that a team would actually trade for Watson considering his extensive legal troubles. Yet many, including Jay Glazer, insist that the Miami Dolphins...
NFL・17 DAYS AGO
featureweekly.com

The Dallas Cowboys will be missing wide receiver Amari Cooper for at least two of their three games in a 12-day span, beginning Sunday against the Kansas City Chiefs. Cooper was placed on the reserve/COVID-19 list on Friday. Cooper tested positive for COVID-19 and is unvaccinated, according to ESPN, which...
NFL・9 DAYS AGO

Hall of Famer Scottie Pippen has thrown shade at his longtime Chicago Bulls teammate Michael Jordan, widely considered the greatest basketball player of all time, since the 2020 debut of the Jordan-centric docuseries "The Last Dance." Now, Pippen is directing his criticism toward the player widely known as football's greatest of all time.
NFL・9 DAYS AGO
thespun.com

There were a lot of rough moments for the Dallas Cowboys in yesterday’s game against the Las Vegas Raiders. But the low point might have been seeing one of their players ejected for a fight. Cowboys special teams player Kelvin Joseph got into a scuffle with Raiders special teams player...
NFL・3 DAYS AGO
The Spun

Aaron Rodgers announced a significant contract move on Monday. Don’t worry, though, Packers fans, it doesn’t have anything to do with his future in Green Bay. Instead, it has to do with how he’s getting paid. Rodgers, who’s carrying a cap hit of $27,073,568, announced on Monday afternoon that he...
NFL・27 DAYS AGO
The Baltimore Sun

There was a time when the Ravens would have celebrated holding Le’Veon Bell to 48 yards on 11 carries. Not so long ago, he lived in their nightmares — those outside runs on which he’d wait and wait, then snap off a double-digit gain, or the pass routes on which he’d toy with some poor linebacker. As an All-Pro for the Pittsburgh Steelers, he played a starring role in some of the most painful ...
NFL・19 DAYS AGO
The Spun

The Steelers Have Added A New Quarterback

The Pittsburgh Steelers find themselves in the midst of complicated situation pertaining to their quarterback position. With Ben Roethlisberger’s status still in doubt due to a positive COVID-19 test, the organization doesn’t have a clear answer as to who will line up under center for this week’s game against the Los Angeles Chargers.
NFL・13 DAYS AGO
The Spun

Arizona Cardinals quarterback Kyler Murray has participated in every practice session this week. However, that doesn’t mean he’s a lock to start this weekend against the Seattle Seahawks. Moments ago, Cardinals head coach Kliff Kingsbury revealed Murray’s status for Week 11. Kingsbury said Murray will be a game-time decision for...
NFL・10 DAYS AGO
New York Post

Travis Kelce and the Chiefs may have this Sunday off, but the tight end still made his weekend about football. Kelce and girlfriend Kayla Nicole attended Sunday’s Eagles game against the Giants at MetLife Stadium in New Jersey, where they got to watch his older brother, center Jason Kelce, in action.
NFL・21 HOURS AGO
The Spun

The Tampa Bay Buccaneers are bringing a familiar face back into the building. According to a report, the Buccaneers have signed veteran wide receiver Breshad Perriman. He will reportedly start out on Tampa Bay’s practice squad. Perriman spent the 2019 season in Tampa Bay. He caught 36 passes for 645...
NFL・19 DAYS AGO