'I absolutely adore her!' Adele throws her support behind Britney Spears and the #FreeBritney movement during surprise Instagram live with fans

She surprised fans by hosting an unexpected Instagram live on social media on Sunday.

And Adele delighted her followers when she revealed her support for fellow artist Britney Spears during the 40-minute long livestream.

The Someone Like You hit-maker, 33, was asked by a fan whether she supports the #FreeBritney movement - a campaign driven by fans to grant Britney autonomy from her conservatorship that has been in place since 2008 - and revealed that she 'absolutely adores' the pop star.

Reacting to the question, Adele replied: 'Of course, I support Free Britney. I love Britney.'

She added: 'I've met her a few times, I absolutely adore her. I'm really happy for her.'

Adele's support comes after Britney's father Jamie Spears was removed as her conservator in a court hearing that took place at the end of September.

A judge ruled that it was 'untenable' for Jamie to remain in charge of Britney's estate and it was in the star's 'best interests' that he be removed.

Public accountant John Zabel was personally chosen by Britney to be appointed as her temporary conservator and a hearing is set to take place in November deciding whether the conservatorship will be terminated entirely.

The decision to remove Jamie came after Britney fought for her dad's removal and spoke out against the conservatorship, likening it to 'abuse' in a testimonial she gave in June.

She claimed that while under the conservatorship she was forced to have a contraceptive IUD placed in her body to prevent her from having another a child. 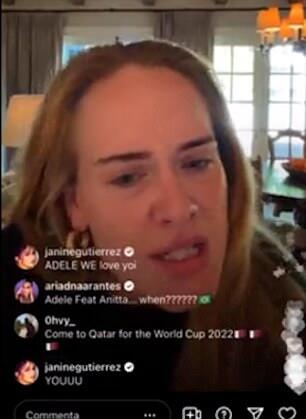 In the months that followed the shocking testimony, Britney's father Jamie faced months of scrutiny and later filed to end the conservatorship. The legal arrangement has been in place for the last 13 years, following Britney's public breakdown in 2007.

Meanwhile, Adele's Instagram live came as she is gearing up to release her new single Easy On Me on October 15.

During her livestream, she played fans a 40-second clip of her upcoming track and teased more information about her upcoming album, believed to be titled 30.

The record will be the first album Adele has dropped in six years - her last release was her third studio album 25, released in 2015, that included hits such as Hello, When We Were Young and All I Ask.

Asked what her new album was inspired by, Adele teased: 'Divorce, baby. Divorce.'

She and ex-husband Simon Konecki, who she shares son Angelo, eight, with, split in 2018.

The vocal talent, who made history covering both British and US Vogue, opened up about their separation while making history in her interview with the iconic fashion publication.

Adele revealed that the pair didn't actually marry until 2018 and later separated the same year, as she she claimed she 'left' her ex-partner and would have 'been miserable had she not put herself first'.

The former couple announced they were going their separate ways in April 2019, with Adele filing court documents five months later.

'When I was 30, my entire life fell apart and I had no warning of it. It just wasn't right for me anymore. I didn't want to end up like a lot of other people I knew,' she revealed.

'It wasn't miserable miserable, but I would have been miserable had I not put myself first. But, yeah, nothing bad happened or anything like that.'

She added of the aftermath of her divorce: 'I was embarrassed. I was really embarrassed. That thing of not being able to make something work.

'We've been trained as women to keep trying, even by the movies we watched when we were little. At the time it broke my heart, but I actually find it so interesting now... how we're told to suck it up.'

Britney Spears said Jeffree Star sent her some of his makeup, including his Holy Mist setting spray and bullet-shaped lipsticks.
CELEBRITIES・12 DAYS AGO
iHeartRadio

Britney Spears Says Her Parents Should Be In Jail, Teases Oprah Interview

The pop superstar filmed a lengthy video message about her life after the the almost 14-year arrangement.
CELEBRITIES・14 DAYS AGO
Newsweek

Britney Spears Thanks Fans and Hints at Oprah Interview on Instagram

Britney Spears broke her silence on Instagram to express her displeasure with the "demoralizing and degrading" conservatorship that has had control over her personal life, professional career, and financial affairs for more than 13 years. On Friday, a Los Angeles judge ordered the conservatorship to be terminated.
LOS ANGELES, CA・14 DAYS AGO

(CNN) — Britney Spears has said the #FreeBritney movement saved her life, four days after her conservatorship finally came to an end. In her first Instagram video statement since the court-ordered arrangement was terminated on November 12, the singer said the movement communicated news of her situation to the public and “gave an awareness to all of them.”
CELEBRITIES・14 DAYS AGO
People

Britney Spears Addresses the End of Her 13-Year Conservatorship: 'I'm Not Here to Be a Victim'

Britney Spears thanks fans for their support during her conservatorship battle

In a video posted to social media overnight, Britney Spears talks about what’s ahead now that she has been released from her conservatorship and thanks fans behind the “Free Britney” movement.Nov. 17, 2021.
CELEBRITIES・14 DAYS AGO
In Style

Britney Spears Shared Her First Statement After Her Conservatorship Was Terminated

Britney Spears is speaking to fans for the first time since her conservatorship came to an end. In a video shared on her social media pages, the pop star said that the #FreeBritney movement saved her life, telling fans, "The #FreeBritney movement — you guys rock. Honestly, my voice was muted and threatened for so long, and I wasn't able to speak up or say anything... I honestly think you guys saved my life, in a way. 100 percent."
CELEBRITIES・14 DAYS AGO

Jubilant Britney Spears thanks her fans

History was made Friday, and it was the best day ever, according to Britney Spears and her fiance, Sam Asghari, who celebrated the termination of the pop star’s 13-year conservatorship. “Good God I love my fans so much it’s crazy !!! I think I’m gonna cry the rest of the...
CELEBRITIES・13 DAYS AGO
Insider

"I do know how embarrassing it is to share the fact I've never seen cash or wasn't able to drive my car…" Spears said in a recent Instagram post.
CELEBRITIES・14 DAYS AGO
K-Fox 95.5

Why Did Britney Spears Call Lady Gaga Her ‘Inspiration’ On Instagram?

Britney Spears came out as a loud and proud Little Monster in 2021. The Princess of Pop has had nothing but kind things to say about her pop peer, Lady Gaga. She took to her Instagram story to thank the House of Gucci actor (while simultaneously addressing Christina Aguilera) for speaking out about Spears' newly won freedom from her 13-year conservatorship.
BEAUTY & FASHION・8 DAYS AGO
Daily Mail

'I threw my arms up and screamed!' Delighted Adele celebrates 30's rave reviews and warm reception with rare social media snap, a glass of wine and adoring message for her fans

Adele took to Twitter on Friday to thank her fans for their support in the wake of the release of her new album 30. The Hello singer, 33, shared a snap showing her in the recording studio with a glass of wine nearby, looking over her shoulder and added a caption reading: 'It was a ride, so I threw my arms up and screamed! Love you all'.
CELEBRITIES・12 DAYS AGO

For a long time, Britney Spears found herself in a conservatorship, one that, in fact lasted for over a decade (13 years to be exact). During that time, she didn't have a lot of control over many different aspects in her life, and it was only when the Free Britney movement started gaining momentum that change really began to be made. Now that she is finally free of the conservatorship, Spears is grateful for all the little things in life.
CELEBRITIES・13 DAYS AGO
NYLON

Adele Was Surprised By Her English Teacher In A Viral Moment

Last week, Adele dropped her new album 30 and reminded us all that Sad Girl Fall is fully in session. The 12-track record — which details the singers’ divorce to Simon Konecki — is full of poetic lyrics, and now we know how Adele learned to write them. Last night, during a televised-concert, she attributed her success to her grade-school english teacher, not knowing the woman was sitting amongst the crowd.
CELEBRITIES・9 DAYS AGO
Ok Magazine

Britney Spears Has 'No Desire' To See Her Mother Lynne Or 'Any Of Her Family' During The Holiday Season, Source Spills

After her conservatorship was terminated earlier this month, Britney Spears has a lot to celebrate this holiday season, but it seems she won't be spending it with her family. An insider told HollywoodLife that the 39-year-old has "no desire" to see her mom Lynne or "any of her family" for the holidays. "Britney has no idea if Lynne would like to see her and celebrate the holidays together as a family, but it really doesn’t matter one way or another," the source revealed.
CELEBRITIES・8 DAYS AGO
InspireMore

“This Could Be A Dream.” Adele Orchestrates Surprise Proposal For Her Biggest Fans.

There are a lot of beautiful, romantic proposal stories, but it’s hard to beat one that involves Adele. For her first live concert in four years, Adele wanted to go all out for the musical event that would later air on CBS. That’s why producers of the event called out to fans of the singer who were looking for a special way to propose. They asked them to submit a one-minute video explaining why they should be chosen for this once-in-a-lifetime opportunity.
CELEBRITIES・9 DAYS AGO
HollywoodLife

Adele got the surprise of her life when she realized her former English teacher was in the audience during her ‘Audience with Adele’ special. Adele cried as she hugged the woman who ‘inspired’ her years ago. During ITV’s An Audience with Adele special, Emma Thompson asked Adele if she had...
CELEBRITIES・9 DAYS AGO
primenewsghana.com

Britney Spears has said her parents should be in jail for controlling her life and finances for more than a decade, following a judge's ruling terminating her 13-year conservatorship. Spears, 39, also joked that she may take after Meghan Markle and Adele and sit down with Oprah for a tell-all...
CELEBRITIES・14 DAYS AGO
Popculture

Britney Spears is thanking fans involved with the #FreeBritney movement for saving her life four days after her 13-year-long conservatorship finally came to an end. In her first Instagram video statement since a judge ordered the conservatorship be terminated Friday, the pop star shouted out the #FreeBritney movement specifically for raising awareness of her situation.
CELEBRITIES・14 DAYS AGO
MIX 107.9

Adele admits her son is ‘not a fan’ of her music

Adele has recently opened up about her new album and about how her son feels about her new album. She said, “I don’t want twelve-year-olds listening to this record. It’s a little too deep.” Adele continued, “I prefer to take care of people who are at my level, who have spent the same amount of […]
MUSIC・1 DAY AGO