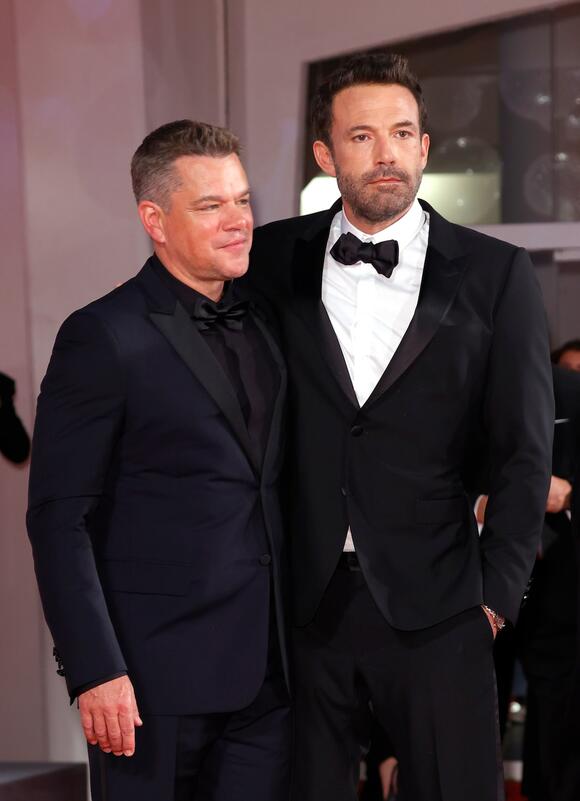 Matt Damon was on the red carpet at NYC's Lincoln Center Saturday for the premiere of his latest movie with Ben Affleck, “The Last Duel,” a period drama also starring Jodie Comer.

Matt talked to “Extra’s” Cheslie Kryst about working with Ben, saying, “I had to kneel every time I was in a scene with him… had to bow to him… We had fun with that, fun with that idea... Our two characters absolutely despised each other, so that was also really fun."

In spite of the film's intensity, he revealed, "We had fun writing it. We laughed a lot… We just wanted those moments to feel very real.”

“The Last Duel” is based on the book of the same name by Eric Jager, with a screenplay by Ben and Matt with Nicole Holofcener. “She’s one of our favorite writers," Matt said. "We basically begged her shamelessly — begged her… Talk about getting on your knees! We were like, 'Please please come write with us.'”

The story about the falling out between two friends, Sir Jean de Carrouges (Damon) and Jacques Le Gris (Adam Driver), after the wife of de Carrouges (Comer) makes serious criminal allegations against Le Gris, leading to a duel.

Matt told "Extra" he was a big fan of the costumes, getting to wear armor for the duel. He said director Ridley Scott made sure it "looked substantial, but making sure we could move so we could do this kind of beautiful choreography that the stunt guys came up with.”

After recently being spotted out at a Harry Styles concert recently, Matt also confessed he's a fan of the "Watermelon Sugar" singer. “That was one of our lockdown albums, 'Fine Line.' Actually, my 15-year-old is a massive fan. We had a great night — that was a great show. We took the whole family. It was a lot of fun.”

Cheslie asked Matt his fave Harry song, leading Matt to say,“You're gonna make me pick… I like 'Fine Line' a lot, actually, I like the way he ends the album, 'we’ll be alright' as a final word. Especially in COVID, that resonated with me.”

"The Last Duel" is in theaters October 15.

Ben Affleck Leaving Jennifer Lopez Because of Their Busy Careers? Singer Reportedly Pressuring Actor To Do THIS

Fans from all over the world have been gushing over Jennifer Lopez and Ben Affleck after they reconciled this year. The couple has since attended numerous red carpet events together and even shared their love on social media. However, behind the sweetness that they portray in the public, one report alleges that there is something bad going on between them; is this true?
CELEBRITIES・10 DAYS AGO
epicstream.com

Jennifer Lopez allegedly wants to wed before Jennifer Garner so that all eyes will be on her. Jennifer Lopez and Ben Affleck couldn’t be more in love with each other. In fact, despite their busy schedules, the A-listers are, reportedly, determined to make their relationship work. Even though it’s only...
CELEBRITIES・5 DAYS AGO
Elle

On Wednesday night, Jennifer Lopez arrived in Los Angeles with her 13-year-old twins Max and Emme. The family was likely there to join Lopez's boyfriend, Ben Affleck, for the Thanksgiving holiday. Lopez recently returned from the much colder climate of British Columbia, Canada, where she was filming her latest project, The Mother.
LOS ANGELES, CA・16 HOURS AGO
Cosmopolitan

The aughts are back. And with it comes the revival of one of the 2000’s favorite couples: Jennifer Lopez and Ben Affleck (a.k.a. Bennifer 2.0). It’s a been a while, so here’s a refresher: Jen and Ben first got together after filming Gigli in 2002 and what a time it was. J.Lo celebrated their love with her song "Dear Ben" on the This Is Me album, and he was in the "Jenny From The Block" music video, too. Then, they got engaged later that year. But, just days before the epic nuptials were supposed to happen, they called it off. Soon after, they ended their relationship altogether. Since then, each has gotten married, had kids, and gotten divorced. Fast forward to 2021, and J.Lo almost married Alex Rodriguez, while Ben dated Ana de Armas. Following their respective breakups, however, Jen and Ben rekindled their spark.
CELEBRITIES・4 DAYS AGO

Jennifer Lopez Is "100%" Open to Getting Married Again — You Hear That, Ben Affleck?

Marry Me star Jennifer Lopez is open to exchanging vows — IRL. The singer appeared on the Today show with her costar Maluma on Thursday and revealed that she hasn't shut herself off to the idea of getting married again. Today host Hoda Kotb boldly asked Jennifer, who is giving...
CELEBRITIES・7 DAYS AGO
extratv

Jennifer Lopez and Ben Affleck seem to be happily in love, but would she be open to marriage again?. While promoting her new movie “Marry Me,” Jennifer told “Today’s” Hoda Kotb, “I don’t know. Yeah, I guess. You know me, I’m a romantic, I always have been, a few times. I still believe in happily ever after, for sure, 100%."
CELEBRITIES・8 DAYS AGO
Collider

Amazon Studios has debuted a new poster for The Tender Bar, George Clooney’s latest film as director. Based on Pulitzer Prize-winning writer J.R. Moehringer’s memoir of the same name, the film stars Tye Sheridan as Moehringer and Ben Affleck as his Uncle Charlie. Written by William Monahan, the Academy Award-winning...
MOVIES・7 DAYS AGO
usueasterneagle.com

In theaters: The Last Duel

Decides who is in the right. the characters perception of the incident. determine who is telling the truth. and De Carrouges is left to fend for himself. to lay with him is simply playful behavior. Eventually he’s accused and denies it. He. goes to Paris to prepare for the duel.
MOVIES・10 DAYS AGO

Ridley Scott responds to the brutal fiasco in ‘The Last Duel’

In October the historical drama film The last duel In cinemas all over the world though there are names like Matt DamonAnd Jodi ComerAnd Adam Driver employment Ben Affleck It became one of the biggest failures of the year. With an 86 percent (7.30/10) on the Tomatometer scale and 81%...
MOVIES・12 DAYS AGO
spectrumlocalnews.com

Matt Damon co-writing a book on access to clean water

NEW YORK (AP) — Matt Damon has some big-name endorsers for a book he has out March 1 about access to safe water. Former President Bill Clinton and Nobel Peace Prize-winner Muhammad Yunus are among those providing blurbs for “The Worth of Water,” which the Oscar-winning actor and filmmaker worked on with civil and environmental engineer Gary White. Damon has been a prominent spokesman for water sanitation since visiting Zambia in 2006, and with White founded the nonprofits Water.org and WaterEquity.
CELEBRITIES・3 DAYS AGO
Deadline

Ben Affleck On Why Acting In George Clooney’s ‘The Tender Bar’ Was An Extremely Rare Career Moment – Contenders L.A.

At Sunday’s Contenders Film: Los Angeles event, The Tender Bar star Ben Affleck and the two young actors — Tye Sheridan and Daniel Ranieri — who share the role of the older and younger J.R. Moehringer in George Clooney’s film version of Moehringer’s memoir, joined me virtually as part of the Amazon Studios presentation. Clooney’s follow-up to his Netflix sci-fi pic The Midnight Sky is an adaptation of Pulitzer Prize winner Moehringer’s bestselling personal coming-of-age story, with the screenplay by Oscar winner William Monahan (The Departed, The Gambler). It tells the story of J.R. (Sheridan and Ranieri), a boy growing up in Long...
MOVIES・12 DAYS AGO
Variety

Lady Gaga and Jared Leto Talk Their ‘House of Gucci’ Transformations: ‘It Was An Immersive Experience’

Father, son and house of Gaga. Method acting aside, Lady Gaga worked through both a physical and mental transformation to play her character inspired by the real-life Patrizia Reggiani. “I’d say truly the most challenging part was playing a murderer,” Gaga told Variety’s Marc Malkin at the red carpet premiere of the film at the Academy Museum in Los Angeles. “But I will say that after a lot of research, I realized that she knows that she made a big mistake, and it was a lot of trauma that drove her towards this huge mistake that I know she regrets. So when...
CELEBRITIES・2 DAYS AGO

Taylor Swift on Who ‘All Too Well’ Is About, Plus: Her New Short Film

Taylor Swift’s new album “Red (Taylor’s Version)” is out now, and the singer hit the red carpet in NYC to celebrate her new short film “All Too Well,” based on one of the tracks. “Extra’s” Cheslie Kryst was with Taylor at the premiere as screaming fans chanted her name outside...
MUSIC・14 DAYS AGO
extratv

Lady Gaga is opening up about two directors in her life, Bradley Cooper and Ridley Scott. “Extra’s” Special Correspondent Samantha Harris caught up with Gaga at the “House of Gucci” premiere in L.A., where the singer stunned in a sparkly Valentino gown and Tiffany jewelry. Her role as Patrizia Reggiani...
MUSIC・7 DAYS AGO
GOBankingRates

Winning an Oscar is a pretty big deal. In addition to the prestige that comes with taking home Hollywood's most prestigious statuette, it can also help increase the star's future earning potential....
CELEBRITIES・11 HOURS AGO
darkhorizons.com

One of the more high-profile failures at the box-office this year has been Ridley Scott’s historical drama “The Last Duel”. Despite an all-star cast and very good reviews, the film tanked at the box-office – essentially ending its theatrical run with a gross of just $27 million worldwide on a $100 million budget.
MOVIES・3 DAYS AGO
TIME

The Outrageous True Story Behind House of Gucci

Will Smith surprised viewers of The Graham Norton Show with his impression of Arnold Schwarznegger.The actor, who is promoting his new film King Richard, appeared on the latest episode of the BBC chat show that was broadcast on Friday (26 November).While there, he shared a story about pushing through the crowd at an opening of a new Planet Hollywood restaurant so that he could get advice on how to become an actor from Schwarzenegger, Sylvester Stallone and Bruce Willis.“They were standing and talking,” Smith explained. “I walked into the crowd, I was like, ‘Hey guys, I’m sorry. I want...
CELEBRITIES・2 HOURS AGO