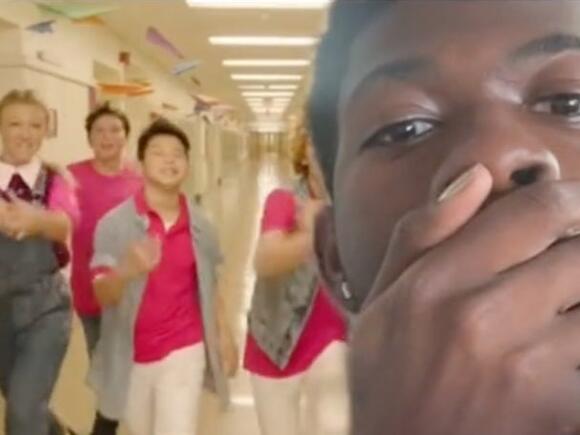 Lil Nas X is getting his own Kidz Bop rendition – and even he is surprised.

Loved by children and parents, Kidz Bop has been remixing popular hip-hop, pop and R&B songs into child-friendly tunes since 2001. They have had some of the best-selling children’s albums over the last two decades.

From Britney Spears’ ‘Toxic’ to Drake’s ‘God’s Plan’ and ‘I’m on One’ by DJ Khaled, the albums have featured some interesting song choices, and now they’ve turned their attention to ‘Montero (Call Me by Your Name)’ – which drew 46.9 million U.S. streams and sold 21,000 downloads in the first week of being released.

Lil Nas X took to his 7.2 million Twitter followers and shared: “lmaooo they are really making a kidz bop version of call me by your name”.

In what initially appeared a joke, the 22-year-old returned with a clip of the ad to confirm he was serious: “not even joking i just saw this commercial – they killed it tho”.

The rapper’s shock prompted him to take the news to TikTok too in a clip that has since racked over 17 million views.

Fellow TikTokers broke out into hysterics which prompted thousands of users to the comments.

One commented, “Bro, imagine their parents watch the music video and see what their kids are singing HA!”

One TikToker highlighted the irony of the rapper’s unintended target audience:

While another joked, “Teacher, what’s a lapdance?”

Back in March, the release of Montero was met with outraged parents who slammed the “inappropriate” single from an artist who was widely loved by children since his release of Old Town Road.

Lil Nas X since hit back at parents and explicitly said: “I am not gonna spend my entire career trying to cater to your children. That is your job” after one parent accused the singer of “targeting kids.”

Rapper Lil Nas X is airing out his relationship drama on the infamous daytime show The Maury Show. The 22-year-old “Industry Baby” artist’ will appear on the November 17th episode to confront his now ex-boyfriend, Yai Ariza. If the teaser is any indication, Yai has a lot of explaining to...
CELEBRITIES・12 DAYS AGO
Vulture

Between the People pregnancy photo shoot and his fake “Montero” daytime TV talk show, Lil Nas X is obsessed with a certain flavor of throwback tabloid culture. And he’s really, really good at parodying it. On Wednesday, the “Industry Baby” singer released a follow-up video to his “That’s What I Want” music video … in the form of a full-length episode of the Maury show. Just in case you passed out after the music video’s steamy locker-room make-out scene, it goes on to show Lil Nas X get his heart broken when he discovers his linebacker BF has a wife and child. Now, Montero gets his comeuppance on the Maury set, with a very game Maury Povich marshaling a paternity and lie-detector test while Lil Nas X makes out with Yai and antagonizes his wife, Ashley. It plays like the most chaotic long-form improv you’ve ever seen. Lil Nas X goes from baiting Ashley (forgetting her name, doubling down on his theory that she’s a cheater) to having his own dramatic moment of stomping off the set. It’s further proof that Lil Nas X needs his own Kroll Show revival.
TV & VIDEOS・9 DAYS AGO
Rolling Stone

Lil Nas X and Maury have collaborated on a segment made for “entertainment purposes,” which was based on the storyline in the rapper’s “That’s What I Want” video. In a trailer preceding the release of the full video on Wednesday, Montero, aka Lil Nas X, finds out his boyfriend Yai Ariza is married to a woman named Ashley who doesn’t know about the affair. Ashley has a four-year-old child named Noah, and it’s also unclear whether Ariza is the father. In the new 20-minute-plus episode about their “unbelievable love triangle,” as the host Maury Povich describes it, the involved parties home...
CELEBRITIES・10 DAYS AGO
Rolling Stone

Lil Nas X to Reveal the ‘Most Scandalous’ Love Triangle… on ‘Maury’?

Lil Nas X is getting ready to dish on Maury this Wednesday about the love triangle inspiration behind “That’s What I Want” — and he’s dropped a trailer spilling the details. The new clip opens with footage from the song’s video, which depicts the backstory of a very real love triangle. The video depicts Lil Nas X and his boyfriend Yai Ariza’s steamy romance and then the rapper’s discovery that Ariza is actually married to a woman named Ashley who has a four-year-old child. Six weeks after dropping the visual, he and the involved parties appear on Maury to open up...
MUSIC・12 DAYS AGO

Previously on Montero, Lil Nas X shared the passionate love story between himself and Yai Ariza in the visual for his single, “That’s What I Want.” However, the heated exchange simmered abruptly when Lil Nas learned that his lover was leading a double life and was actually married with a child. Six weeks later, the promotional saga continues as the unofficial ménage à trois head to The Maury Show to reveal the shocking truth. Complete with over-the-top dramatic reactions from the audience, Maury narrates what is called “one of the most scandalous stories ever had on the ‘Maury Show.'” “We fell in love at...
CELEBRITIES・11 DAYS AGO
NBC News

Lil Nas X is one of GQ's Men of the Year

Queer icon Lil Nas X is adding yet another milestone to his impressive résumé: GQ cover model. The Grammy-winning “Old Town Road” singer will grace one of the magazine’s three Men of the Year covers, with “Spider-Man” actor Tom Holland and NBA star Giannis Antetokounmpo appearing on the others. GQ unveiled all three covers Monday.
MUSIC・12 DAYS AGO
AceShowbiz

In a new interview, the Grammy-winning emcee also mentions DaBaby, who faced huge backlash over his homophobic remarks during his set at Rolling Loud Festival. AceShowbiz - Lil Nas X believes that him coming out as gay in the summer of 2019 is only the beginning of a new culture in hip-hop. In a new with GQ, the "Montero" artist claimed that more gay rappers would appear in the future.
ENTERTAINMENT・10 DAYS AGO
Bossip

Lil Nas X isn’t playing! Or is he? It’s always tricky to tell with him. The “Industry Baby” singer recently said that he’s bored with trolling Boosie, but the rest of us are still fair game. He already took us to heaven, hell, and jail, so what’s left? Maury!. This...
TV & VIDEOS・14 DAYS AGO

Lil Nas X says two major rap stars declined to collaborate on his first album, Montero. The "Industry Baby" musician, 22, sat down for an interview with playwright Jeremy O. Harris for GQ, in which he opened up about making his debut album. Lil Nas X revealed that Drake and Nicki Minaj declined to work with him on Montero.
CELEBRITIES・11 DAYS AGO
Fremont Tribune

In his cover interview for GQ magazine, the Old Town Road hitmaker revealed that he reached out to the hip-hop stars' teams about a collaboration but they didn't work out.
CELEBRITIES・10 DAYS AGO
Billboard

Many of the nominated musicians took to social media to express their excitement and gratitude. The nominations for the 2022 Grammy Awards arrived Tuesday (Nov. 23), with the Recording Academy honoring the artists who have made a significant impact in their respective genres and across the music industry as a whole this past year.
MUSIC・4 DAYS AGO
kfrxfm.com

The awards just keep coming for Lil Nas X. The “Montero” rapper was just named the GQ Musician of the Year. “There’s going to be so many gay rappers,” said Lil Nas X to GQ. “Ten years from now, everything that I’m doing won’t even seem like it was shocking.”
CELEBRITIES・10 DAYS AGO

He won three Grammys 2020. 3x Grammy winner Lil Nas X may scoop up a few more Grammys at the 2022 Awards. Following a successful roll out and release of his debut album ‘Montero,’ he’s up for five awards. This makes him the most-awarded, openly gay artist at the upcoming award.
MUSIC・4 DAYS AGO
American Songwriter

Lil Nas X racked up quite a few 2022 Grammy Award nominations on Tuesday. The Atlanta native’s album “Montero” and his breakout single “Montero (Call Me By Your Name)” scored nods in three of the “Big Four” categories: Record of the Year, Album of the Year, and Song of the Year. He was nominated in the fourth category, Best New Artist, at the 2020 Grammys.
CELEBRITIES・4 DAYS AGO
hotnewhiphop.com

Lil Nas X Reunites With Brothers & Father, Fans Think They Look Like They're About That Action

Lil Nas X has a lot to be thankful for this year, finishing another extremely successful year in his music career with more #1s, more GRAMMY nominations, and millions upon millions of streams. On Thanksgiving, the Georgia-born rapper reunited with his brothers and his father for the holiday and they snapped a picture for social media, which Nas' fans are loving.
CELEBRITIES・1 DAY AGO
myhot995.com

Two months after the release of his debut album, Montero, Lil Nas X shared that two of the artists he really wanted on the project declined -- Nicki Minaj and Drake. During an interview with GQ, the "Industry Baby" rapper explained that while he doesn't typically ask other artists for a feature, when it came to Montero, he was lucky enough to get most of the ones he wanted.
CELEBRITIES・11 DAYS AGO
wccbcharlotte.com

Rapper Lil Nas X is set to appear on an upcoming episode of the Maury Povich show next week. In the dramatic teaser the 22-year-old, whose name is Montero, appears to tell a woman that he and her boyfriend have been dating for a month. The episode airs on WCCB Charlotte next Wednesday.
CHARLOTTE, NC・12 DAYS AGO
dbrnews.com

In a new interview with playwright Jeremy O Harris for GQ magazine, the two discussed the role of hypermasculinity in the world of hip-hop and the singer's hopes for change in the industry over time.
CELEBRITIES・11 DAYS AGO
American Songwriter

In many ways, time can now be measured as before and after “Old Town Road.” The smash-hit from multi-hyphenate Lil Nas X has changed the way leagues of people see music and what it can be. “Old Town Road” even spawned a KIDZ BOP version—all this from a previously unknown musician in his early 20s.
MUSIC・12 DAYS AGO