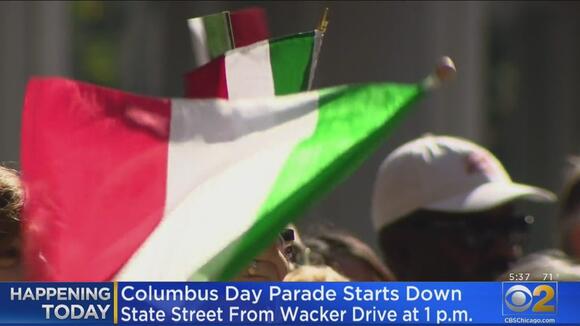 It kicks-off from Wacker Drive at 1p.m., heading south to Van Buren.

There, the Joint Civic Committee of Italian Americans will talk about status of the holiday, and Columbus statues that have been removed from around Chicago.

Those statues were taken down as a push to rename the holiday, Indigenous Peoples Day grows.

Supporters of the name change point to Columbus’s history of murder, genocide and other violent crimes committed against the Native American people he encountered.

The Cook County board has delayed a vote to rename the holiday. A protest rally was planned for Monday afternoon at 10 a.m. in Pottawattomie Park located in Rogers Park.

Just this past Friday President Joe Biden issued the first-ever presidential proclamation of Indigenous Peoples Day that will now be observed on Oct. 11.

Columbus Day should be the only one for this day . Indigenous Day should be another day . All this does is create friction between people which some people want. Government should know better.

All this is is discrimination against Italian Americans, BLM is forcing out another culture for no reason except to divide this country! Stand up and tear down blm

East Chicago, Indiana Nonprofit ‘Paying It Forward’ Lives Up To Its Name For Families Having Trouble Getting Presents Under The Christmas Tree

EAST CHICAGO, Ind. (CBS) — For families who are grieving or who might have trouble putting food on the table, it might be tough getting presents under the tree for Christmas. As CBS 2’s Marissa Parra reported, one woman in East Chicago, Indiana is trying to save Christmas for families who need it. “You’re seeing Christmas magic,” said Tamye Longoria, president of the nonprofit Paying It Forward. Longoria doesn’t offer mere toy shopping – she’s looking to make miracles. “I’m actually on dialysis, so after I got out of dialysis, I picked (the kids) up and brought them over here,” said Adolph Lomeli. “I’m a...
EAST CHICAGO, IN・7 HOURS AGO
CBS Chicago

CHICAGO (CBS) — Hundreds of people attended a public memorial for Chicago icon Timuel Black Sunday at the Rockefeller Chapel on the University of Chicago Campus. Black died in October at the age of 102. The memorial service lasted more than three hours and featured many of the things he loved, including jazz and African drums. Timuel Black was a respected educator, civil rights activitist and adviser to some of Chicago’s most respected politicians. He was remembered for his dedication, service and generosity. Mayor Lori Lightfoot and Gov. JB Pritzker were among those honoring his life and achievements. Several people shared stories about the impact Black had on tehri lives. Black spent his life working alongside such trailblazers as Martin Luther King, Jr., Harold Washington, and President Barack Obama.
CHICAGO, IL・16 HOURS AGO
CBS Chicago

CHICAGO (CBS) — For some people jingle bells are the signature sound of the holiday season, but for others its the roar of the Chicagoland Toys for Tots Motorcycle Parade. It has been a tradition for 43 years. Last year there was no parade due to the COVID-19 pandemic. Sunday’s parade went up Western Boulevard from 83rd all the way to Lane Tech High School at Addison. Each motorcycle rider delivered a new toy to be given to a child in need. Anyone interested can still donate a toy for the holiday by leaving it at any of the toy drop boxes across the Chicagoland area or at the Toys for Tots headquarters in Bridgeview.
SOCIETY・16 HOURS AGO
CBS Chicago

CHICAGO (CBS) — There was no emergency, but there was an important call Friday morning for Chicago firefighters. They rushed to the Macy’s on State Street to deliver 2,500 letters to Santa. The jolly old elf himself led the firefighters to the mailbox, as the reindeer helpers cheered. This is National Believe Week, so Macy’s is donating $2.00 to Make-A-Wish for every letter to Santa dropped in its mailboxes. If you can’t go to a store you can click here or write a letter to Santa on Macys.com/social/believe.
CHICAGO, IL・3 DAYS AGO

CHICAGO (CBS) – A Chicago holiday tradition returns. There will be a public ceremony at Navy Pier welcoming the Chicago Christmas ship at 10 a.m. Saturday. Last year’s ceremony was canceled because of the pandemic. 1,200 donated trees will be unloaded and given to families in need and community organizations. The original Christmas ship went down in Lake Michigan in 1912.
CHICAGO, IL・2 DAYS AGO
CBS Chicago

CHICAGO (CBS)– There’s a new winter market opening Friday in Andersonville. You’ll be able to do a little holiday shopping, find handcrafted goods, vintage items and enjoy some treats. The market will be held under heated tents on Catalpa between Clark Street and Ashland Avenue. It’s open Friday from 3 p.m. to 8 p.m. Saturday from 11a.m. to 7 p.m. and Sunday from 11 a.m. to 5 p.m.. Entrance is free, but there is a suggested $5 donation. Masks are required.
CHICAGO, IL・3 DAYS AGO
CBS Chicago

CHICAGO (CBS) – On Thursday, the Chicago Gold Star Families Memorial held their tree lighting ceremony. It’s a reminder of the men and women who died in the line of duty and their families. Later this month, members of the Chicago Police Memorial Fund, and Santa, will be riding around the city delivering gifts to those gold star families.
CHICAGO, IL・3 DAYS AGO
CBS Chicago

CHICAGO (CBS) — A day after the City Council averted a potential showdown vote on a controversial new ward map drawn up by the Black Caucus and the Rules Committee, members of the Latino Caucus moved to send the remapping process to a voter referendum next year. Members of the Latino Caucus, and three other allies who aren’t part of the caucus, filed a petition with the City Clerk’s office on Thursday, seeking to put their proposed ward map on the ballot during the 2022 primary elections. However, the Latino Caucus said they intend to continue negotiating with other members of the...
CHICAGO, IL・4 DAYS AGO