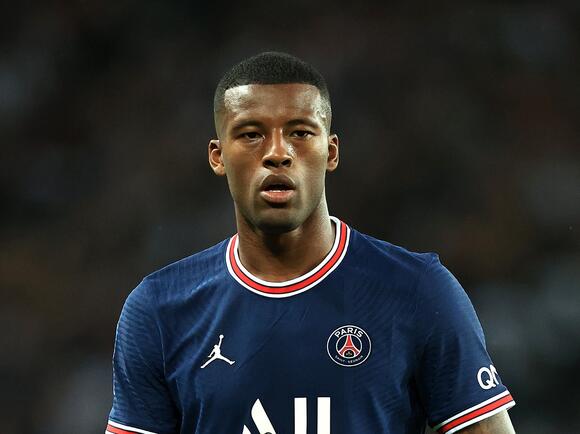 Gini Wijnaldum admits he is “not completely happy” at Paris Saint-Germain just four months after joining from Liverpool .

The Dutch midfielder left the Reds on a free transfer this summer after failing to find an agreement over a new contract at Anfield.

But the 30-year-old has made just 11 appearances, playing only 502 minutes this season.

And Wijnaldum has claimed life is “difficult” right now under Mauricio Pochettino, who appears to have changed his plans over how to use the player since the arrival of Lionel Messi.

“I can’t say I’m completely happy,” Wijnaldum said, according to NOS . “Because the situation is not what I wanted. But that’s football and I’ll have to learn to deal with that.

“I’m a fighter. I have to stay positive and work hard to turn it around.

“I have played a lot in recent years, was always fit and also did very well. This is something different and that takes getting used to.

“I was really looking forward to the new step and then this happens. It is very difficult.”

Wijnaldum has not completed 90 minutes in any of PSG’s last six Ligue 1 matches, while Pochettino gave him just 12 minutes against Manchester City in the Champions League, with Ander Herrera and Idrissa Gueye seen as preferred options for the time being.

He said: “Of course I’m worried. I already talked to him about that when I arrived. But the alarm bells are not going off yet.”

Kylian Mbappe has been linked with a move away from PSG next summer and his teammate Lionel Messi has spoken about his future. Liverpool are in desperate need of an attacker. Whether it's in the winter transfer window or next summer. One player that Liverpool fans would love to see...
PREMIER LEAGUE・8 DAYS AGO
The Independent

Pep Guardiola has insisted that Lionel Messi deserved to win this year’s Ballon d’Or, following the Argentina forward’s record seventh triumph.Messi was named the best men’s player in the world on Monday night, beating Bayern Munich striker Robert Lewandowski and Chelsea midfielder Jorginho to win the award.Messi won his first four Ballon d’Or trophies between 2009 and 2012 while playing under Guardiola at Barcelona, and the Spanish coach has said his former player was worthy of this year’s prize.“You can never say it is unfair Lionel Messi wins the Ballon d’Or,” Manchester City coach Guardiola said on Tuesday amid...
SOCCER・4 DAYS AGO
The Independent

If you are already bored of the interminable debate over whether Cristiano Ronaldo is a help or a hindrance to Manchester United, bad news, this is just the beginning. It is not going away any time soon, partly because he is not going away any time soon either. Just as Old Trafford prepares to enter the gegenpressing era and even more attention is paid to what he does off the ball, he keeps winning matches with what he does on it.That might ignore some of the particular nuances in the arguments over Ronaldo’s role in this team, on both sides...
PREMIER LEAGUE・1 DAY AGO
Yardbarker

Advice to the Gooners who want to call the likes of me names for questioning where the club is at ……. maybe don’t post abuse before Arsenal yet again fail in a big game? Once again proving the likes of myself correct…. No one has a right to tell anyone...
PREMIER LEAGUE・1 DAY AGO

Liverpool returned to winning ways in emphatic fashion as they put Arsenal to the sword with a 4-0 victory which halted the Gunners’ 10-match unbeaten run. Having seen their unbeaten start to the season ended at West Ham before the international break, Jurgen Klopp’s side responded in style with a comprehensive dismantling of their opponents, who had arrived looking to leapfrog their hosts into the top four.
PREMIER LEAGUE・14 DAYS AGO
Tribal Football

Mikel Arteta says his Arsenal side were punished by Liverpool because they "completely crashed" during a comprehensive defeat at Anfield. The Gunners were beaten 4-0 and conceded three of those goals in a 25-minute spell during the second half. It brought Arsenal's 10-game unbeaten run in all competitions to an...
PREMIER LEAGUE・13 DAYS AGO
Tribal Football

Liverpool hero Heskey on Salah: Why would he move?

Liverpool hero Emile Heskey Mohamed Salah being tempted away. Salah is waiting for new contract talks to commence. "Things like the contract, the limelight and the goals tally don't faze him, and that's fantastic to see," Heskey told the Mirror. "Salah does his talking on the pitch, he doesn't need...
PREMIER LEAGUE・10 DAYS AGO

Why Liverpool are struggling to control games without Wijnaldum

The loss of the Dutch midfielder, coupled with Virgil van Dijk's gradual return to full fitness, have left the Reds vulnerable to counterattacks. Liverpool look a little on edge. After a brilliant start to the 2021-22 season they have conceded 13 goals in their last nine games across the Premier...
PREMIER LEAGUE・14 DAYS AGO
Tribal Football

PSG star Lionel Messi believes Liverpool can win the Champions League this season. The Reds have been in impressive form this season and Messi thinks they may be able to scoop the European trophy if they keep it up, just like they did in 2019. But the Argentine wouldn't rule...
PREMIER LEAGUE・11 DAYS AGO
San Diego Union-Tribune

Amid Man United link, PSG's Pochettino puts on happy face, but loss to City hints at trouble in Paris

MANCHESTER, England -- Publicly, at least, Mauricio Pochettino is happy at Paris Saint-Germain and not distracted by the possibility of managing Manchester United, but you would never have guessed it from his pained expression on the touchline during his team's 2-1 Champions League defeat at Manchester City on Wednesday. Second-half...
PREMIER LEAGUE・9 DAYS AGO
Sporting News

PSG's Pochettino responds to Man Utd rumours: 'I am happy in Paris'

Paris Saint-Germain boss Mauricio Pochettino has underlined his commitment to his current employers despite being linked with the vacancy at Manchester United. The Argentine has emerged as one of the frontrunners to replace Ole Gunnar Solskjaer, who was removed from his post following Saturday's 4-1 drubbing at the hands of Watford.
PREMIER LEAGUE・10 DAYS AGO
Yardbarker

Lionel Messi is a couple of months into his tenure with Paris Saint-Germain. The 34-year-old recently spoke to Spanish media outlet Marca, where they discussed various topics, including his relationship with fellow forward Kylian Mbappé. Over the summer, Real Madrid did their best to pursue PSG into selling Mbappé, but...
SOCCER・11 DAYS AGO
LFCTransferRoom

As PSG prepare to take on Manchester City in the Champions League on Wednesday, Lionel Messi has been giving his opinion on who he thinks could win the competition this season. Messi made a surprise move when he left Barcelona in the summer to make the switch to Paris to...
PREMIER LEAGUE・10 DAYS AGO
fourfourtwo.com

Liverpool target Kylian Mbappe may be heavily rumoured to be going to Real Madrid - but Lionel Messi has suggested it's not a foregone conclusion just yet. Real bid twice for the World Cup winner over the summer according to reports but were rebuffed by the French giants. Now, his contract runs out in the summer of 2022, with Real expected to make another offer.
PREMIER LEAGUE・9 DAYS AGO
Yardbarker

Manchester City and Belgium midfielder Kevin De Bruyne states that he and his family were Liverpool fans when he was growing up and he idolised Michael Owen. Speaking in a quick fire question interview, the Belgian states that his favourite player growing up was Liverpool's Michael Owen. He also went on to talk about the similarities to the former Liverpool and Real Madrid striker.
PREMIER LEAGUE・7 DAYS AGO
The Guardian

Ralf Rangnick has spoke about his appointment as Manchester United interim manager and his plans for the team. Join Dave Tindall now
PREMIER LEAGUE・1 DAY AGO
SB Nation

Chelsea attacker Christian Pulisic was back in a starting lineup for the Blues for the first time in three months earlier this week in our 4-0 victory over Juventus, with his last starting appearance taking place in the Blues’ 3-0 win against Crystal Palace. His absence was mostly due to an ankle injury picked up during international duty with the USMNT in September, taking him out of contention for almost two months.
PREMIER LEAGUE・9 DAYS AGO