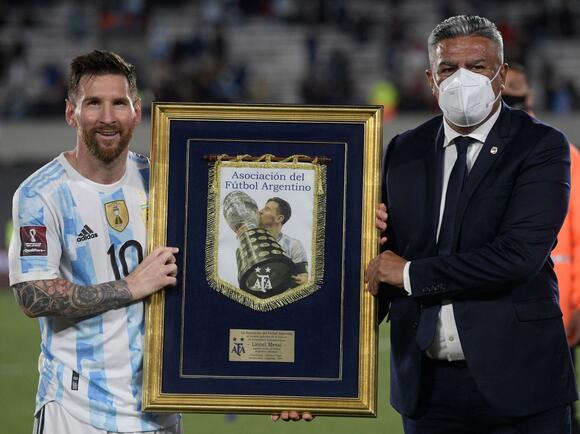 The 34-year-old opened the scoring on the night with a floated cross that crept into the far corner of the net.

Last month, Messi had surpassed Brazilian legend Pele as South America's record international male goalscorer when he hit a hat-trick in a 3-0 win over Bolivia. He still trails women's soccer legend Marta by 32 goals, with the Brazilian scoring 112 so far in her career.

After his goal against Uruguay, the PSG star was presented with a CONMEBOL award by the president of the Argentine Football Association (AFA), Claudio Tapia.

The award featured a photo of Messi lifting the Copa America title, which he helped his country win in July.

"We played a great game. Everything worked out perfectly," said Messi after Argentina's victory, which was sealed by goals from Rodrigo de Paul and Lautaro Martinez.

"Uruguay wait for you and they generate danger. Once we got the first goal we started to find space and the goals appeared."

While Messi is still doing the business for his country, he has thus far struggled to make much of an impact for his new club side, Paris Saint Germain.

Since leaving Barcelona to join the Ligue 1 giant this summer, Messi has scored just once in five matches, while he has also failed to register a single assist.

His only goal for his new club came against Manchester City in the Champions League, after which he said: "I was getting desperate to score my first goal."

He added: "I am settling into the team little by little."

Weekend football countdown: Get the latest from David Tindall as the 12-team draw for the European qualifying play-offs takes place
PREMIER LEAGUE・1 DAY AGO
SPORTbible

Pablo Maffeo showed exactly why Lionel Messi hailed him as his toughest opponent of all time after becoming his ‘shadow’ with a sublime man-marking performance. Messi, who left Barcelona in the summer to sign for Paris Saint-Germain, came up against Maffeo when his opponent played for Girona. The six-time Ballon...
SOCCER・12 DAYS AGO
SPORTbible

Lionel Messi's Most Underrated Goal Of His Career Saw Him Hit The Floor, Still Somehow Scored

Lionel Messi's 'most underrated' goal of his career is a phenomenal solo strike in the Champions League as he somehow still found the back of the net despite falling over. Messi sensationally took things into his own hands during a European clash between Barcelona and Napoli back in August 2020.
SOCCER・1 DAY AGO
Derrick

PARIS (AP) — Lionel Messi scored his first goal in the French league and Kylian Mbappe grabbed the fastest goal of his career as Paris Saint-Germain beat Nantes 3-1 on Saturday. Messi sealed PSG's win in the 87th minute from Mbappe's pass at the end of a counterattack. After receiving...
SOCCER・7 DAYS AGO

Argentina national team coach Lionel Scaloni has confirmed that Paris Saint-Germain star Lionel Messi will be joining his squad for the World Cup qualifiers. Lionel Messi has been out of action for PSG for quite some time now and is reportedly still nursing a minor injury. However, Argentina coach Lionel Scaloni shut down claims that the six-time Ballon d’Or winner is unlikely to play for his national side’s international fixtures.
FIFA・11 DAYS AGO
Sporting News

Lionel Messi finally scored his first Ligue 1 goal for Paris Saint-Germain as the league leader secured another win, 3-1 over visiting Nantes, to extend its lead to 12 points in the standings. But Messi & Co. did it the hard way. A deflected Messi shot and a late curling...
SOCCER・7 DAYS AGO
Yardbarker

Paris Saint-Germain will return from the November international break with a pair of key fixtures in the Ligue 1 match against Nantes and the UEFA Champions League away group stage fixture against Manchester City. There have been question marks over the past week on whether Lionel Messi may be available...
UEFA・11 DAYS AGO
SPORTbible

Lionel Messi was finally able to open his Ligue 1 account this afternoon, after scoring the type of goal that the Argentine has become synonymous with down the years. Taking on Nantes at Parc Des Princes, Paris Saint-Germain knew that a win would take them back to the top of Ligue 1.
SOCCER・7 DAYS AGO

PARIS -- Lionel Messi finally has his first Paris Saint-Germain goal in Ligue 1 after completing a flattering 3-1 victory over FC Nantes on Saturday with a superb strike. Prior to the legendary Argentine's moment of magic, Mauricio Pochettino's men were extremely fortunate to be in front through a deflected Kylian Mbappe effort and a wild Dennis Appiah own goal either side of a Randal Kolo Muani strike and Keylor Navas' red card.
SOCCER・7 DAYS AGO
Reuters

PARIS, Nov 20 (Reuters) - Lionel Messi scored his first Ligue 1 goal as Paris St Germain opened a 13-point lead in Ligue 1 despite playing almost half an hour with 10 men in a 3-1 home win against Nantes on Saturday. Messi found the back of the net with...
SOCCER・7 DAYS AGO
MassLive.com

Could this be the one? The first Lionel Messi goal for Paris St. Germain? The drought can’t last forever. His team is rolling. Is the world’s best player set to break through?. Watch and find out. : Where to buy Lionel Messi jerseys online. How to watch Paris Saint-Germain vs....
UEFA・8 DAYS AGO
SPORTbible

Thierry Henry has pointed out the systemic differences between Paris Saint-Germain and Barcelona that could be contributing towards Lionel Messi's underwhelming form for the French club. Messi arrived in Paris last summer, in a deal that was intended to reinvent Mauricio Pochettino's side. A new look attack of Messi, Neymar...
SOCCER・10 DAYS AGO

Lionel Messi scored his first Ligue 1 goal as Paris Saint-Germain opened a 13-point lead in Ligue 1 despite playing almost half an hour with 10 men in a 3-1 home win against Nantes on Saturday. Messi found the back of the net with a curled left-footed effort from outside...
SOCCER・7 DAYS AGO
The Independent

Lionel Messi came to the rescue for 10-man Paris St Germain as they strengthened their grip at the top of Ligue 1 with a 3-1 win over Nantes.Messi’s first league goal for PSG and his deflected strike for a Dennis Appiah own-goal, dug his side out of a hole after goalkeeper Keylor Navas was sent off with 25 minutes remaining.Randal Kolo Muani had hauled Nantes level in the 76th minute after Kylian Mbappe’s early opener for the hosts.Lionel Messi was involved in nine shots during the game against Nantes (6 shots, 3 chances created), his highest tally in a...
SOCCER・7 DAYS AGO
Yardbarker

Lionel Messi is a couple of months into his tenure with Paris Saint-Germain. The 34-year-old recently spoke to Spanish media outlet Marca, where they discussed various topics, including his relationship with fellow forward Kylian Mbappé. Over the summer, Real Madrid did their best to pursue PSG into selling Mbappé, but...
SOCCER・4 DAYS AGO
ESPN

Barcelona midfielder Pedri has been named the winner of the 2021 Golden Boy award, seeing off competition from Borussia Dortmund and England's Jude Bellingham. Pedri, 18, becomes the first Barca player since Lionel Messi in 2005 to win the prize given to the best young player in Europe. - La...
SOCCER・5 DAYS AGO
Tribal Football

Messi admits being PSG teammates with Ramos 'strange - at first'

PSG star Lionel Messi admits calling Sergio Ramos a teammate was difficult in the beginning. Like former Barcelona captain Messi, ex-Real Madrid skipper Ramos joined PSG in a Bosman deal last summer. Messi revealed to Marca: "Now nothing, but at the beginning it was strange after so many years of...
SOCCER・5 DAYS AGO
ClutchPoints

Lionel Messi reveals that PSG star Kylian Mbappe will make his decision at the end of the season on whether he’ll leave the club or not. Ever since the arrival of Messi, rumors have surrounded the PSG with Mbappe’s departure to Real Madrid. In addition, Madrid proceeded to add fuel to the fire by openly stipulating their interest in the 22-year old.
SOCCER・4 DAYS AGO
ClutchPoints

Lionel Messi opens up about his real situation at PSG

The Argentine, who left Barcelona in the summer, has also discussed the Red Devils' turbulent start to the 2021-22 campaign. Paris Saint-Germain superstar Lionel Messi has given his opinion on Cristiano Ronaldo's return to Manchester United while reflecting on his rivalry with the Portugal international. Ronaldo re-signed for United after...
PREMIER LEAGUE・4 DAYS AGO