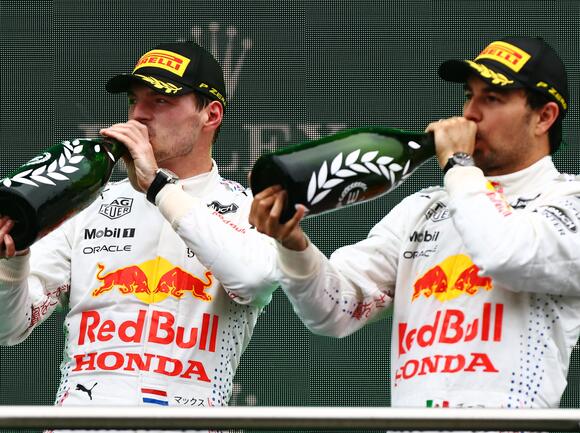 Max Verstappen has said Red Bull teammate Sergio Perez should be rewarded with tequila for holding off Lewis Hamilton at the Turkish Grand Prix .

As a result of those finishes, Verstappen erased Hamilton’s two-point lead at the top of the Formula One drivers’ standings, and the 24-year-old is now six points clear of the seven-time champion with six races left this season.

“You owe me a couple of tequilas!” the Mexican said.

“I’ll get them to you in Mexico – before the weekend or after?” Verstappen asked, referring to the Mexican Grand Prix on 7 November.

He went on to say: “With Lewis, when he came I think I was at the worst stage of my race. I was degging off massively, and to defend him was pretty hard.

“I think at that point Lewis is the fastest car on the track and [I’m] probably one of the slowest and really degging off with my tyres.

“He was already ahead, but I gave it a good shot into Turn 1 and managed to survive. I went through the wet patches and the car stuck in.

“It was a really enjoyable fight.”

Next up on the F1 calendar is the US Grand Prix in Austin, Texas on 24 October.

'Verstappen should get a five place grid penalty for next race': F1 fans call for Red Bull driver to be penalised after his on-board footage from Sao Paulo GP is FINALLY released in which he avoided any punishment for running Lewis Hamilton off track

Formula One fans have called for Max Verstappen to receive a penalty after on-board footage of his tussle with Lewis Hamilton in Brazil was finally released. Mercedes were furious after a lap 48 incident between the two championship title contenders, in which their man overtook Verstappen, only for him to be forced wide and pushed back down to second place.
MOTORSPORTS・11 DAYS AGO
The Independent

F1: Lando Norris reveals why he will not hold up Lewis Hamilton’s Brazilian Grand Prix charge

Lando Norris insists he will not attempt to hold up Lewis Hamilton during the Brazilian Grand Prix on Sunday. Hamilton will start 10th in Sao Paulo after serving a five-place grid penalty following Saturday’s Sprint race, in which he battled from the back of the grid to fifth in a supreme drive over 24 laps. The Mercedes driver had been sent to the back of the field after he was disqualified from Friday’s qualifying due to an infringement of DRS regulations, which came as a further blow to his hopes of catching title rival Max Verstappen after he was...
MOTORSPORTS・13 DAYS AGO
ESPN

Max Verstappen joked that the stewards of the Sao Paulo Grand Prix can treat themselves to dinner and several bottles of expensive wine after they fined him €50,000 for touching Lewis Hamilton's car in parc ferme after Friday qualifying. Verstappen was caught physically inspecting the rear wing of Hamilton's car...
FIFA・14 DAYS AGO
The Independent

Lewis Hamilton is chasing down Max Verstappen at the top of the Formula 1 standings, just eight points behind after winning the Qatar Grand Prix - his second straight victory following a huge performance in Brazil.Just over a week remains until the next race, with the Saudi Arabia Grand Prix being the penultimate one of the season - then it’s off to Yas Marina in the United Arab Emirates. The long straights will unquestionably favour the Mercedes cars over those of Red Bull, especially with Toto Wolff revealing Hamilton will get his newest “spicy” engine back in the car...
MOTORSPORTS・1 DAY AGO

Seven-time Formula One champion Lewis Hamilton saw his chances at winning a fifth consecutive championship take a big hit with his disqualification from Sao Paolo Grand Prix qualifying Saturday. Hamilton, 36, was set to start out front in the Sunday morning race after finishing qualifying with the fastest time Friday....
MOTORSPORTS・14 DAYS AGO
The Independent

Lewis Hamilton reignited his bid for a record-breaking eighth world championship after taking a brilliant victory at the Brazilian Grand Prix.Hamilton started 10th after a series of penalties, but on an extraordinary afternoon in Sao Paulo he fought his way past rival Max Verstappen with just 12 laps left following a ding-dong battle in the race of the season.His Mercedes team-mate Valtteri Bottas took third ahead of Sergio Perez LEWIS WINS IN BRAZIL!!!!!!! 🔥🔥🔥🔥🔥🔥🔥🔥🔥🔥🔥🔥🔥🔥 pic.twitter.com/i5bv9O8gKn— Mercedes-AMG PETRONAS F1 Team (@MercedesAMGF1) November 14, 2021Hamilton slashed Verstappen’s title lead from 21 to 14 points with three races left and 78 points still...
MOTORSPORTS・13 DAYS AGO
The Guardian

Lewis Hamilton fought his way from 10th to first, in the process recording one of the greatest wins of his or anyone else’s career, to reduce Max Verstappen’s overall lead to 14 points with three races to go
MOTORSPORTS・13 DAYS AGO
newschain

Lewis Hamilton’s bid for a record-breaking eighth world championship took another fascinating twist on Tuesday after Mercedes called on Formula One’s stewards to reconsider their decision not to penalise rival Max Verstappen at the Brazilian Grand Prix. Hamilton won the Interlagos race following a superb comeback drive, but Verstappen escaped...
MOTORSPORTS・11 DAYS AGO

Mercedes have asked for a review of the decision not to penalise Red Bull's Max Verstappen for forcing Lewis Hamilton wide in the Sao Paulo Grand Prix. The incident on lap 48 of the race was "noted" by the stewards but no investigation was carried out. Mercedes have lodged a...
MOTORSPORTS・11 DAYS AGO
Sports Illustrated

Lewis Hamilton is promoting LGBTQ+ rights on his Qatar Grand Prix race helmet, swapping his usual message "Still I Rise" for the pride flag with the message "We Stand Together." Formula One's next two races are in Qatar and Saudi Arabia, two countries human rights groups have said use the...
MOTORSPORTS・8 DAYS AGO
Ottumwa Courier

LOSAIL, Qatar (AP) — Lewis Hamilton and Mercedes moved a bit closer to reclaiming control of the Formula One championship race by quickly figuring out the newest circuit on the calendar. Hamilton overcame a nagging stomachache Saturday to beat rival Max Verstappen for the pole at the inaugural Qatar Grand...
MOTORSPORTS・7 DAYS AGO
Daily Mail

Max Verstappen ended an explosive day in the title battle against Lewis Hamilton narrowly quicker than his rival in Friday practice at the Qatar Grand Prix. Verstappen came into the weekend subject to a Mercedes review request regarding his defensive driving against Hamilton at the Sao Paulo Grand Prix last time out.
MOTORSPORTS・9 DAYS AGO

Title rivals Max Verstappen and Lewis Hamilton continue to be at loggerheads over driving standards as they head into the decisive final three grands prix of the season. After taking an outstanding pole position for Sunday's Qatar Grand Prix, Hamilton said it was still "not clear" as to what is and is not acceptable when racing for position following the row over Verstappen's driving in Brazil last weekend.
MOTORSPORTS・7 DAYS AGO
The Independent

Max Verstappen has been hit with a five-place grid penalty for Sunday’s Qatar Grand Prix, it has been confirmed.The Red Bull driver was set to start second on the grid alongside title-rival Lewis Hamilton, who stormed to pole position to gain the upper-hand for Mercedes in Doha.Now Hamilton has a chance to close the gap to Verstappen in the drivers’ championship with the Dutchman starting seventh at the Losail International Circuit.LIVE: Follow live updates from Qatar Grand PrixVerstappen drops back as a result of an incident at the end of qualifying, where a puncture for the AlphaTauri of Pierre Gasly...
MOTORSPORTS・6 DAYS AGO
Daily Mail

Mercedes chief Toto Wolff is ready to unleash the incredible engine that helped Lewis Hamilton power to a supreme victory at the Sao Paulo Grand Prix eight days ago. Hamilton was given a new engine for the race in Brazil, which with a focus on performance rather than reliability enabled him to come from last place in the Saturday sprint qualifying race to first in the grand prix after passing chief title rival Max Verstappen.
MOTORSPORTS・5 DAYS AGO
firstsportz.com

Another Dominant Win by Lewis Hamilton Ahead of a Worried Max Verstappen at the 2021 Qatar Grand Prix; Fernando Alonso Takes Fantastic Third

As the 2021 Formula 1 season comes to an end, the Qatar Grand Prix was up next. A night race, the sparks were flying before the race even began as Valtteri Bottas and Max Verstappen incurred 3 and 5 place penalties respectively for not obeying yellow flags in qualifying. The meant front row for Pierre Gasly alongside Lewis Hamilton, while Fernando Alonso and Lando Norris rounded off the top 4.
MOTORSPORTS・6 DAYS AGO

Martin Brundle believes that the best way for Lewis Hamilton to beat Max Verstappen to the Formula 1 Drivers’ Championship could be for the Briton to take another five-place grid penalty at this Sunday’s Qatar Grand Prix.The seven-time world champion did exactly that at the Brazilian Grand Prix last time out, storming through from tenth on the grid to pass Verstappen out front and ultimately take one of the finest victories of his stellar career.Mercedes had opted to install a brand new internal combustion engine into Hamilton’s power unit for the Interlagos race, willingly incurring the starting penalty after...
MOTORSPORTS・11 DAYS AGO
The Independent

Sergio Perez has said he is willing to focus on helping Max Verstappen win this year’s Formula 1 championship, as the season approaches its final two races.Perez’s Red Bull teammate has an eight-point lead over Lewis Hamilton ahead of the Saudi Arabian and Abu Dhabi Grands Prix, with Hamilton having won the last two races to narrow the gap to Verstappen at the top of the drivers’ standings.And Perez, who is in fourth place, has said he understands that the priority for Red Bull is ensuring Verstappen seals his first F1 title.“It’s part of the game; Max is the...
MOTORSPORTS・2 DAYS AGO
The Spun

Legendary NASCAR driver Jimmie Johnson is set to represent the United States on an international scale in February. Earlier this month, it was announced that Johnson and Travis Pastrana would represent the United States at the international Race of Champions. Johnson won the event with Jeff Gordon in 2002. Now,...
MOTORSPORTS・5 DAYS AGO
The Independent

Olympic champion Jason Kenny hopes the new UCIChampions League can give track cycling a shake-up and introduce a new generation of fans to the sport.The inaugural season of the new TV-friendly competition that organisers hope can do for track cycling what Twenty20 did for cricket will continue on Saturday in Panevezys, Lithuania, before heading to London for two legs next weekend.Kenny, who became Britain’s most decorated Olympian by winning his seventh gold in Tokyo will be behind a microphone rather than on a bike as he enjoys a post-Games break, but is looking forward to some first-hand experience of...
SPORTS・2 DAYS AGO