Star Trek Discovery: Fans have mixed reactions for season 4 which introduces The Ferengi in new trailer 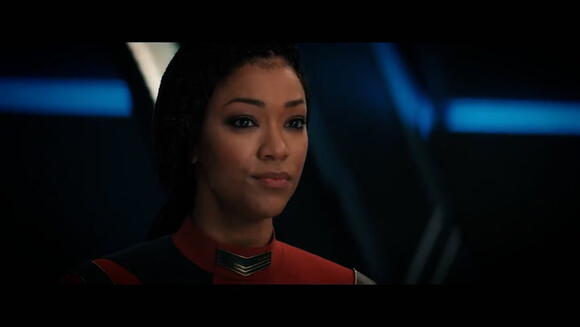 In the trailer, Michael Burnham, played by actor Sonequa Martin-Green , is seen operating as the new captain of Discovery, following her promotion at the end of season three.

According to the synopsis, the fourth season will see the Discovery’s crew dealing with a massive anomaly that threatens life throughout the galaxy, putting Federation and non-Federation worlds alike at risk.

The crisis forces all the various worlds to work together to confront the unknown and ensure a hopeful future for all.

The trailer also introduces The Ferengi, who are warp-capable humanoid species from the planet Ferenginar in the Star Trek universe.

While some fans have shown great excitement after the trailer’s release, with many claiming that they “cannot wait”, others aren’t impressed by the same “universe-ending phenomenon” in the show.

“I’m so buzzing for this. [It’s] been too long since last season. I will have my munchies at the ready for episode one,” a person wrote on Twitter.

The third season of Star Trek: Discovery followed the crew of the USS Discovery as they travel to the future, over 900 years after the events of Star Trek: The Original Series .

Season four of Star Trek: Discovery will premiere on 18 November on Paramount Plus in the US, and on Netflix in 190 other countries, including the UK.

In a universe where we're all running out of good TV shows to watch, more people should be talking about Dark. But they're not. That's a bit weird. A mind-bending show that deftly combines internal family drama with time travel, Dark's third and final season was recently released on Netflix and, much like its previous two seasons, it rules on every possible level imaginable.
TV SERIES・10 DAYS AGO
TechRadar

It’s not even December yet, but that hasn’t stopped the Christmas movies arriving on streamers thick and fast. Yes, Halloween has been and gone, so expect holly to replace horror for at least the next month. That sled-load of festive filmmaking begins now, with the likes of A Boy Called...
TV SHOWS・10 DAYS AGO
ComicBook

The success of Squid Game on Netflix proved that audiences around the globe are willing to watch original programming on the streamer that wasn't exclusively American produced and in English, even viewers in the United States proved interested in foreign content. Luckily for Netflix it wasn't long before their next big South Korean original series arrived on the scene as their all-new horror show Hellbound has arrived. The new series, which hails from Train to Busan director Yeon Sang-ho and their writing partner Choi Gyu-seok, has already shown that it will be a hit as the series has a perfect, 100% rating on Rotten Tomatoes and is already dominating the Top 10 on the streaming service.
TV SERIES・13 DAYS AGO
StarTrek.com

Four years ago, the first Star Trek television show to air in twelve years came to our screens. Around the world, fans waited with bated breath to see what this new vision of the Final Frontier would bring. None more so than the developers of Star Trek Online. A narrative, free to play online roleplaying game, STO had been one of many Star Trek creators filling in the gaps those past shows had left behind. For almost a decade, folks like Design Director Al Rivera and Staff Writer Paul Reed had been picking up threads that were left dangling and weaving them into a larger picture of the Star Trek universe. And now, for the first time, they were going to get new content to play with.
VIDEO GAMES・10 DAYS AGO

While the original series in the franchise started traveling around the galaxy in 1966, now 50 years later, STAR TREK: DISCOVERY is… going, where no one has gone before. Join DCW50’s Jimmy Alexander in Chantilly, Virginia at the Smithsonian Air and Space Museum Annex, the home of the Space Shuttle Discovery, the perfect place to talk to The Starfleet’s favorite couple… Dr Hugh Cruz and Lieutenant Paul Stamets.
CHANTILLY, VA・14 DAYS AGO
CBS News

Sonequa Martin-Green returns to her role as Michael Burnham in season 4 of "Star Trek: Discovery" on Paramount+. She joins "CBS Mornings" to discuss becoming the first Black woman to become a captain in the "Star Trek" franchise and what else fans can expect from the new season. (Disclosure: CBS News and Paramount+ are divisions of ViacomCBS)
TV SERIES・12 DAYS AGO
CNET

Last year, Star Trek: Discovery jumped nearly 1,000 years into the future in the biggest shakeup in the franchise's history. So how does the show follow that act? It will take on, at least metaphorically, the coronavirus pandemic in the form of a galaxywide threat that could cause serious destruction.
TV & VIDEOS・14 DAYS AGO

This Star Trek: Discovery article contains spoilers for Season 4, Episode 1. Read our full review here. The crew of the USS Discovery might be firmly established in a century well beyond the rest of Star Trek canon, but that doesn’t mean the rich history of the Final Frontier isn’t always with them. In fact, even the title of the very first episode of Star Trek: Discovery, Season 4, is an Easter egg. “Kobayashi Maru,” references Star Trek II: The Wrath of Khan, and the famous no-win scenario first introduced in that film. The idea of a no-win scenario is a big deal for Captain Burnham in this first episode of Season 4. But, that very big thematic concept isnt’ the only Trekkie call back in the debut episode of DISCO’s latest season.
TV SERIES・14 DAYS AGO
StarTrek.com

Up until last week, Discovery fans could watch the Paramount+ show on Netflix. But ViacomCBS opted to make all episodes, including Season 4, available only on Paramount+, a streaming service that has launched in a small number of countries. To appease Discovery fans, ViacomCBS will make the new episodes available in many countries on Pluto TV and on select on-demand platforms. “To all of the international Star Trek: Discovery fans: we hear you. We love this series too,” a new statement released on the Star Trek official website and the franchise’s official social media channels this morning. “We love it for the incredible cast, the hardworking crew, the imaginative storytelling, the groundbreaking, diverse characters who bring the show to life and what it represents to so many people around the world. Star Trek has always put its fans first. We want to do the same.”
TV SERIES・9 DAYS AGO
trekcore.com

On this week’s episode of WeeklyTrek, brought to you in partnership between The Tricorder Transmissions Podcast Network and TrekCore, host Alex Perry is joined by returning guest Jamie McGregor to discuss all the latest Star Trek news. This week, Alex and his guest discuss the following stories from TrekCore and...
TV SERIES・11 DAYS AGO
IndieWire

Paramount+’s “Star Trek” franchise keeps shaking things up. Its flagship series “Discovery,” now in its fourth season, has a new leader in the captain’s chair: Sonequa Martin-Green’s Michael Burnham, whose remarkable arc over the series’ previous 39 episodes set up this moment of her ascension to be especially fulfilling. But “Discovery” is also doing something that “Trek” has never fully embraced before: interconnectedness among its various shows airing at the moment (especially “Picard”) as well as those that wrapped more than 20 years ago, such as “Deep Space Nine” and “Voyager.” Even when those particular shows aired simultaneously in the ‘90s, they...
TV SERIES・12 DAYS AGO
Inverse

Robot bodies aren’t what they used to be. In Star Trek: Discovery Season 4, the year is 3189, but it looks like Dr. Culber (Wilson Cruz) is busting out technology from the year 2399. Gray (Ian Alexander) and Adira (Blu del Barrio) are understandably confused. “This is 800-year-old technology?” Gray...
TV & VIDEOS・8 DAYS AGO
Decider

It’s not entirely out of the realm of possibility for Star Trek shows to reference each other. After all, they take place in the same, tightly knit and coordinated universe. And so far the rebooted Trek TV shows have mostly grown out of Star Trek: Discovery. The exception, though, is Star Trek: Picard — until now.
TV SERIES・9 DAYS AGO
TechRadar

Bad news, Trekkies: Netflix has officially lost the rights to Star Trek: Discovery, with the show now exclusive to Paramount Plus in every region. The popular sci-fi series has always been exclusive to ViacomCBS’ new streamer in the US, but international viewers had been able to enjoy seasons 1 to 3 on Netflix – under the Netflix original banner – given the absence of Paramount Plus overseas.
TV SERIES・12 DAYS AGO