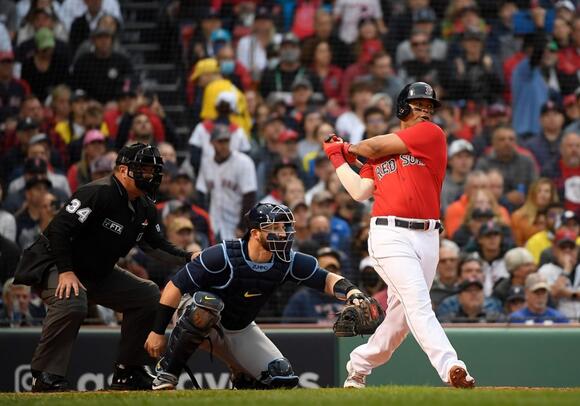 Christian Vazquez hit a two-run homer with one out in the bottom of the 13th inning as the Boston Red Sox got a walk-off win over the Tampa Bay Rays 6-4 in Game 3 of their American League Division Series on Sunday.

Boston took a 2-1 lead in the series and can close out the best-of-five set in Game 4 on Monday night, also at Fenway Park. The game coincides with the twice-postponed 125th Boston Marathon, and the Red Sox traditionally host a late-morning game on the day of the Marathon.

Tampa Bay nearly took the lead in the top of the 13th after Kevin Kiermaier’s double hit off the short wall in right field and bounced over the wall after it ricocheted off the right fielder Renfroe. After a review, Kiermaier was awarded a ground-rule double — holding Yandy Diaz at third base. Diaz would have scored had the ball stayed in play.

Boston’s Enrique Hernandez (3 for 6) hit a first-inning single, a tying RBI single in the third and a solo homer in the fifth inning, which gave him his franchise record seventh consecutive postseason hit in as many plate appearances.

Hernandez went 5-for-6 with a solo homer and three RBIs in the Red Sox’s 14-6 win Friday in Game 2 at Tampa Bay. He became the first player to record eight hits over a two-game span during a single postseason.

Red Sox starter Nathan Eovaldi allowed two runs over five innings, giving up three hits and a walk while striking out eight to match his playoff career high set Oct. 5 in the AL wild-card win over the New York Yankees. 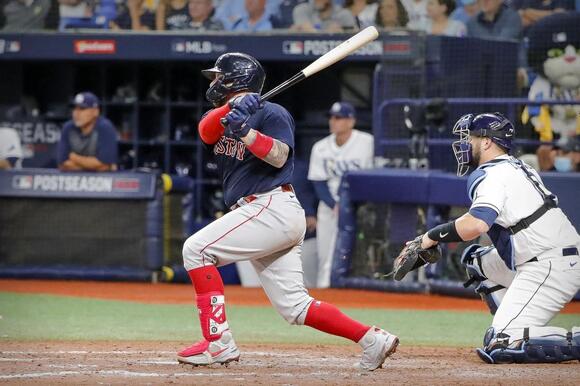 Meadows homered over the Rays’ bullpen in right field to put Tampa Bay up 2-0 in the first. Kyle Schwarber cut Boston’s deficit in half in the home first with his leadoff homer onto the Green Monster in left-center on Rasmussen’s second pitch of the game.

Hernandez and Rafael Devers added RBI singles in the third to put Boston ahead 3-2. After Hernandez homered in the fifth, the Rays pulled within a run on Franco’s home run to left-center to lead off the eighth.

Randy Arozarena tied it at 4-4 for Tampa Bay with his two-out double later in the inning.

The Boston Red Sox lost a key member of their rotation earlier this offseason, as Eduardo Rodriguez agreed to a five-year deal worth $77 million with the Detroit Tigers. On Friday, the front office found a free agent who can potentially take Rodriguez’s spot in the rotation. According to ESPN...
MLB・11 DAYS AGO
ESPN

Wander Franco's 12-year contract extension with the Tampa Bay Rays that guarantees him $182 million and could pay a maximum of $223 million is shocking in only one regard: that the Rays would make that kind of financial outlay, even to a burgeoning superstar like Franco. It is not just...
MLB・14 DAYS AGO
Lebanon Democrat

Brady North, Cumberland’s first baseman on the Bulldogs’ 2014 NAIA national championship team, will put on a big-league uniform next spring when he reports to the Tampa Bay Rays’ spring training site. North, 30, has been promoted to assistant hitting coach, along with Dan DeMent, on the parent club under...
MLB・14 DAYS AGO
detroitsportsnation.com

According to a report from Hector Gomez, Wander Franco has signed a 12-year, $233 million contract extension with the Tampa Bay Rays. Bob Nightengale adds that this is a record-setting deal for a player with less than one year of MLB service. BREAKING NEWS: Wander Franco signed a 12 year...
MLB・14 DAYS AGO

The Red Sox need to bolster their stable of arms for the late innings, and it appears Jeurys Familia, who has spent the bulk of his career pitching in the seventh inning or later, is on the radar. Boston is showing interest in the longtime New York Mets relief pitcher,...
MLB・14 DAYS AGO
FanSided

The Boston Red Sox desperately needed to address their rotation. With Eduardo Rodriguez leaving for Detroit, Boston had a gaping hole in the middle of the rotation that they needed to fill. Although there are several young arms who could be ready for a starting role, the Red Sox may not be ready to entrust two spots to those youngsters.
MLB・11 DAYS AGO
Sportsnaut

The Tampa Bay Rays just did something unnatural for their sake. This is in reference to the organization agreeing to
MLB・12 DAYS AGO
Sportsnaut

The Tampa Bay Rays have agreed to a one-year, $8 million contract with right-hander Corey Kluber, according to MLB Network.
MLB・9 DAYS AGO

The New York Yankees will now have to swallow a move made by the the Tampa Bay Rays that may come back to haunt them in 2022. Ken Rosenthal of the Atlantic has reported that this morning starting pitcher Corey Kluber reached an agreement on a one year deal for the MLB 2022 season.
MLB・9 DAYS AGO
NBC Sports

For several years during Dave Dombrowski's tenure as Boston Red Sox general manager, the club's farm system was barren. Most of the top prospects were shipped out of town for veteran talent as Dombrowski's front office had only one goal in mind: a championship. They succeeded in that endeavor. The...
MLB・8 DAYS AGO
iheart.com

Did You See What Happened To The Boston Red Sox Website?

The news of the Major League Baseball strike became official on Thursday and the disconnect between the players union and the league may be greater than we were led to believe. Among the many developments of the first day of the lockout was the team and league websites looked dramatically different than they did on Wednesday.
MLB・5 DAYS AGO

As Major League Baseball begins its labor dispute with its players, Auburn’s own major leaguer could be looking for another new home. The Boston Red Sox announced on Tuesday that the organization will not tender the 2022 contract for outfielder Tim Locastro. As a result, Locastro becomes a free agent.
MLB・5 DAYS AGO
iheart.com

(via Tampa Bay Rays Communications) - The Tampa Bay Rays have signed free agent left-handed pitcher Brooks Raley to a two-year, $10 million contract, including a club option for the 2024 season. The signing brings the 40-man roster to its full capacity. Raley, 33, went 2-3 with a 4.78 ERA...
MLB・7 DAYS AGO
MassLive.com

The Red Sox are paying James Paxton $10 million in 2022 to rehab from Tommy John surgery and possibly return to start games at some point during the second half. There’s no guarantee he will pitch. He might miss the entire season. The important part of this contract is the...
MLB・6 DAYS AGO
Tv20detroit.com

A former Boston Red Sox player who helped the team win a World Series title in 2007 has died. According to ESPN Deportes and Dominican newspaper Diario Libre, former shortstop Julio Lugo died of an apparent heart attack on Monday. Lugo's sister, Rina Lugo, told the sports outlet that her...
MLB・22 DAYS AGO
FanSided

The Boston Red Sox finally made their first move of free agency after being rumored to be involved with just about every player available. The move the Sox made was a one year deal worth $7 million for former Tampa Bays starting pitcher Michael Wacha. It’s not a huge move, and it almost certainly won’t be the last pitcher Boston brings in this offseason.
MLB・10 DAYS AGO
ESPN

The Red Sox and Brewers swung a significant trade Wednesday night just ahead of the lockout, with Boston shipping outfielder Hunter Renfroe to Milwaukee for a package centered around Jackie Bradley Jr. Bradley, 31, was a mainstay for Boston from 2013 to 2020, starring defensively in the outfield before the...
MLB・5 DAYS AGO
FanSided

Jon Heyman of MLB Network is reporting on Twitter that free agent outfielder Kyle Schwarber currently has a “huge market” with some teams like the Boston Red Sox and the Philadelphia Phillies showing interest. Some other teams, like the Miami Marlins and Colorado Rockies, and others are interested as well.
MLB・8 DAYS AGO
FanSided

Boston Red Sox still have shopping left to do

The lockout may be happening, but that does not mean that teams are done plotting their next moves. The Boston Red Sox had made a pair of moves in the hours before the labor stoppage, inking Rich Hill to a one year deal and making a surprising trade to bring Jackie Bradley Jr. back for Hunter Renfroe.
MLB・4 DAYS AGO