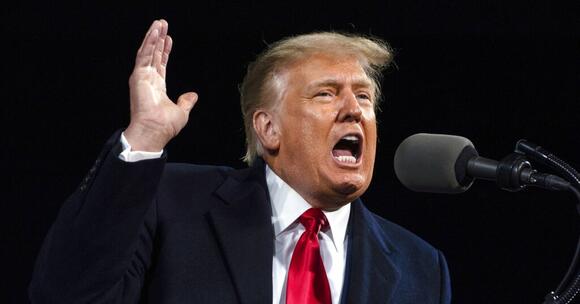 Former President Donald Trump may not be the person who was "pulling the strings" behind a plan hinged on replacing the top Justice Department official with a loyalist willing to carry out a more aggressive strategy to challenge the results of the 2020 election, a Democratic Senate investigator admitted on Sunday.

Sen. Sheldon Whitehouse, a member of the Senate Judiciary Committee, appeared on NBC News's Meet the Press to discuss the interim report released last week by his panel on the DOJ pressure campaign.

Trump is said to have favored replacing Jeffrey Rosen , his acting attorney general, with Jeffrey Clark, another DOJ official who drew up a proposal to intervene in the Georgia certification process and raised doubts about the election results in other states. The former president opted not to dismiss Rosen after he was told during an early January meeting in the Oval Office that top Justice Department officials and White House counsel Pat Cipollone would resign if he went through with the plan, according to the 394-page report from the Senate Judiciary Committee, which was based on the testimony of former officials and documents.

Whitehouse told host Chuck Todd that investigators have "a very complete picture of the extent to which Trump was personally involved in this," and he noted Trump's overtures to Georgia officials about the election results is the focus of a separate investigation looking into whether the former president and his allies broke state laws.

MARK MEADOWS ON FBI INFORMANT IN CAPITOL RIOT CROWD: 'THERE IS A WHOLE LOT THAT NEEDS TO COME OUT'

But the Rhode Island Democrat said the question of who actually masterminded the DOJ "scheme" remains unclear, and he pondered how it was funded.

"What we don't know is who was really behind this," Whitehouse said. "The text of the transcript and the body English of the witnesses suggests that they had very little regard for this character Jeffrey Clark, who was nominally going to be the new attorney general. They doubted his qualifications to even have that role."

"So, it's a possibility, I suppose, that he saw this moment and grabbed it, but it's an equally real possibility that he was a cog in a larger machine, and we've got a lot of work to do to figure out how that machine ran through this period, who was behind it, where the money came from, and what's been going on," he added.

Whitehouse said Senate investigators, who are cooperating with the House Jan. 6 Select Committee, don't yet have a clear view on that subject.

"We don't know yet, but, you know, this guy jumped to a dark money enterprise. So, he's been taken care of, Jeffrey Clark. There was a lot of activity around this with members of Congress. There's just a lot left to be learned," he added.

Clark, who was the head of the Justice Department's civil division during the Trump administration, has since been hired by the New Civil Liberties Alliance as the conservative civil rights group's chief of litigation and director of strategy.

He has refused to sit down for a voluntary interview, the Senate Judiciary Committee report said. Dick Durbin, chairman of the panel, has asked the D.C. Bar to open an investigation into Clark.

A GOP rebuttal report insists available evidence shows Trump followed the advice and recommendations of his senior advisers and did not use the Justice Department to overturn President Joe Biden's victory.

Democrats are having buyers regret they are finding out everything Trump said was true and they can’t admit it even though the evidence is obvious. If Biden was the big white hope they thought he was they wouldn’t still be still blaming Trump for all there failures

If what Trump did wasn't breaking the laws of a presidential election the laws need to be changed and all phone calls like this by any future president to a state election official SHOULD be recorded.

trumps been right about so many things, but the left hate him so much that they dont care. but he is a true patriot and loves this country. and the left are destroying it. him or desantis would be a great fit for the whitehouse. and then we could take our country back, from the marxist left. i would die for my country, and cant believe whats happening here.

After a recent video surfaced of Rep. Lauren Boebert making anti-Muslim comments about Rep. Ilhan Omar, former President Donald Trump on Tuesday called for the Minnesota Democrat to apologize rather than the Colorado Republican.
POTUS・9 HOURS AGO
WashingtonExaminer

Attorneys representing former President Donald Trump argued before the U.S. Court of Appeals for the District of Columbia Circuit on Tuesday that a "handful of documents" should be withheld from the congressional committee investigating the Jan. 6 Capitol riot.
CONGRESS & COURTS・11 HOURS AGO
WashingtonExaminer

President Joe Biden had barely contained the delta COVID-19 variant when he slapped travel bans on South Africa and seven neighboring countries as he waits for more information regarding the new omicron strain.
PRESIDENTIAL ELECTION・16 HOURS AGO
Business Insider

Jena Griswold told The Washington Post that there was a concerted campaign to place Trump allies in roles overseeing elections.
COLORADO STATE・14 HOURS AGO

As the Jan. 6 select committee investigation gathers momentum, Donald Trump has gotten several cronies to refuse to testify by invoking “executive privilege.” That’s absurd on its face: Much of the information Trump wants to keep buried doesn’t relate to the office of the presidency, but rather to his incitement of mob violence to remain president illegitimately.
POTUS・13 HOURS AGO
Newsweek

To date, Trump has made at least four assertions of executive privilege since leaving office in an attempt to block the release of sensitive information.
CONGRESS & COURTS・9 HOURS AGO
The Guardian

Hours before the deadly attack on the US Capitol this year, Donald Trump made several calls from the White House to top lieutenants at the Willard hotel in Washington and talked about ways to stop the certification of Joe Biden’s election win from taking place on 6 January. The former...
PRESIDENTIAL ELECTION・21 HOURS AGO
Reuters

WASHINGTON, Nov 30 (Reuters) - U.S. appeals court judges on Tuesday signaled skepticism toward former President Donald Trump's bid to keep records about his conversations and actions before and during the deadly Jan. 6 Capitol riot by a mob of his supporters away from congressional investigators. A three-judge panel of...
POTUS・10 HOURS AGO

The former president’s lawsuit to shield his White House records came under scrutiny in court on Tuesday.
WASHINGTON, DC・8 HOURS AGO
CNBC

Judges grilled lawyers for former President Donald Trump about his bid to block the release of White House communications and other records to the lawmakers investigating the deadly Capitol invasion. The House select committee seeks those documents as part of its probe of the riot, when hundreds of Trump's supporters...
POTUS・12 HOURS AGO
Newsweek

Jeffrey Clark is now the second former Trump official to face contempt proceedings from the 1/6 panel.
PRESIDENTIAL ELECTION・9 HOURS AGO
The Guardian

Former president pressed lieutenants about ways to delay certification of election result, plus vaccine is word of the year
POTUS・18 HOURS AGO

The chair of the House committee investigating the Jan. 6 riot at the U.S. Capitol said Tuesday that former White House chief of staff Mark Meadows has begun cooperating with their probe. “Mr. Meadows has been engaging with the select committee through his attorney," Rep. Bennie Thompson, D-Miss., said in...
POTUS・10 HOURS AGO
Newsweek

Donald Trump Must Have a Diabolical Plan, Officials Assumed. But There Was No Plan

In this daily series, Newsweek explores the steps that led to the January 6 Capitol Riot. On November 29, President Donald Trump gave his first TV interview since the election, appearing on "Sunday Morning Futures" with Maria Bartiromo. The president spoke for 46 minutes over the phone and delivered an extended monologue, going through his litany of evidence of voter fraud, calling the election a "fraud" and "rigged."
POTUS・1 DAY AGO
AOL Corp

Trump to ask court to keep records away from U.S. Capitol riot panel

WASHINGTON (Reuters) - Former President Donald Trump's lawyers on Tuesday are set to ask a U.S. appeals court to keep records about his conversations and actions before and during the deadly Jan. 6 Capitol riot by a mob of his supporters away from congressional investigators. The U.S. Court of Appeals...
POTUS・17 HOURS AGO

President Joe Biden may have avoided a partisan showdown in the Senate by re-nominating Jerome Powell lead the Federal Reserve, but Republicans on Capitol Hill aren't giving him the benefit of the doubt when it comes to the three additional nominations he's expected to make in the coming weeks.
WARREN, OH・9 HOURS AGO
Newsweek

"It will be a ratings bonanza for television," said the former president in a statement.
PRESIDENTIAL ELECTION・1 DAY AGO
WREG

WASHINGTON (AP) — A House committee investigating the Jan. 6 Capitol insurrection will vote Wednesday to hold a former Justice Department official in contempt, demanding criminal charges against a defiant witness for a second time as lawmakers seek answers about the violent attack. The committee on Monday scheduled a vote to pursue contempt charges against Jeffrey […]
CONGRESS & COURTS・13 HOURS AGO
WashingtonExaminer

Former Vice President Mike Pence is headed back to New Hampshire as Republicans eyeing a 2024 bid jockey for position in the key early primary states.
PRESIDENTIAL ELECTION・11 HOURS AGO