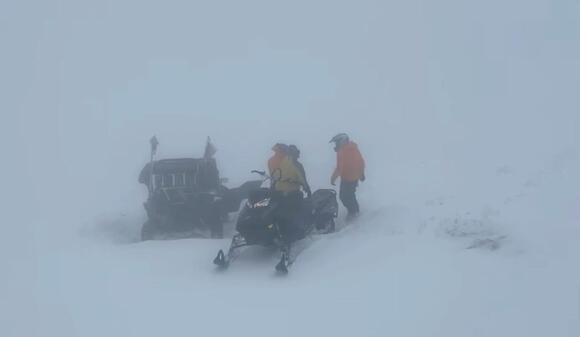 FARMINGTON, Utah — An unexpected snowstorm forced the rescue of dozens of runners in a long-distance trail race in the mountains of northern Utah.

None of the 87 or so runners rescued Saturday was hospitalized though several were treated for hypothermia and one was hurt in a fall, according to Davis County Sheriff Kelly Sparks.

“We feel very fortunate today that there were no serious injuries,” Sparks said.

The 50-mile (80-kilometer) race in the Francis Peak area between Ogden and Salt Lake City began at 5 a.m. Severe weather struck around four hours later. Some runners were wearing just shorts and a T-shirt, authorities said.

“We thought, ‘We’ll be OK once we get to Francis Peak and then we start coming down the mountain. We’ll be out of the snow and it’ll be fine,’” Stowell said. “But it just turned terrible. It was just like a blizzard up there.”

Temperatures plummeted to 20 degrees Fahrenheit (negative 7 Celsius) while as much as 18 inches (46 centimeters) of snow fell in strong wind.

Rescuers using snowmobiles and other vehicles caught up with runners on the route and got them out of the mountains, KSL-TV reported .

PARK CITY, Utah — Park City Mountain Village is scheduled to open for skiing and snowboarding on Wednesday, December 1, with terrain off of the Payday and First Time lifts. […]
PARK CITY, UT・10 HOURS AGO
TownLift

PCMR opens on Canyons Village side

PARK CITY, Utah — Park City Mountain Resort (PCMR) opened for the season on Sunday morning on the Canyons Village side. Skiers and snowboarders lined up early before the lifts […]
PARK CITY, UT・17 HOURS AGO
TownLift

SUMMIT COUNTY, Utah — North Summit Fire District, along with Utah Highway Patrol, responded to an incident on Sunday afternoon in which a semi-truck traveling westbound on I-80 near mile […]
PARK CITY, UT・14 HOURS AGO

PARK CITY, Utah — Around 10 a.m. Saturday morning, an accident involving multiple vehicles occurred at the intersection of SR 224 and Ute Blvd. According to the Utah Department of […]
PARK CITY, UT・1 DAY AGO
TownLift

PARK CITY, Utah — Yesterday, in Igls, Austria, for the first time in the history of the sport, there was a three-way tie for first place. In a different group […]
PARK CITY, UT・1 DAY AGO

SALT LAKE CITY — Earlier this week, The Salt Lake Tribune and AccuWeather said they will be updating their state maps to reflect the Great Salt Lake’s decline. The lake dropped […]
POLITICS・4 DAYS AGO
TownLift

Small Business Saturday is this weekend!

PARK CITY, Utah — At the center of Historic Park City is Main Street, the home to over 200 unique businesses and the trailhead to your mountain town adventure. Visitors […]
PARK CITY, UT・2 DAYS AGO
TownLift

City Park will have three free ice rinks this winter

Temperatures will stay warm through the end of the month

SALT LAKE CITY — In a forecast released on Sunday, the National Weather Service (NWS) said that the entire western United States is looking to be above normal temperature conditions […]
SALT LAKE CITY, UT・6 DAYS AGO
TownLift

DALLAS — Determined to reclaim Thanksgiving traditions that were put on pause last year by the pandemic, millions of Americans will be loading up their cars or piling onto planes […]
TRAVEL・4 DAYS AGO
TownLift

Storm clouds gathered above the Wasatch Back on Saturday prompting hopes that they would drop snow on the ski resorts. Although the isolated, inclement weather was welcome, right where it […]
PARK CITY, UT・7 DAYS AGO
TownLift

PARK CITY, Utah — Canyons Village plans to open on Sunday, November 28. The Cabriolet and Red Pine Gondola will be running. Vail Resorts plans to have terrain off of […]
PARK CITY, UT・5 DAYS AGO
TownLift

PARK CITY, Utah — A new stoplight was put up on Tuesday at the intersection of Richardson Flat Rd. and SR 248 by the Park City Heights neighborhood, as a […]
PARK CITY, UT・5 DAYS AGO
TownLift

SALT LAKE CITY — For decades, the U.S. Forest Service’s practice of putting out wildfires was a huge success. But the policy backfired, setting the stage for the massive destructive […]
UTAH STATE・6 DAYS AGO
TownLift